…  the mechanical inline low-pass filters against digital noise called Firewall for Loudspeakers on the speaker inputs. I ran this setup for two days solid. At night I simply hit mute on the Nagra. Taking sound bytes throughout, as predicted sonics morphed. I'm just the wrong guy to ask whether they swung more than usual. Again, I'm not in the habit of sitting through day-to-day break-in to know what's normal. What I did know? Whenever I took brief sonic snaps, they suggested a more dull, grey and flat than unobstructed view from the peak. The specter of Thomas the doubter flickered at stage right. I told him to return to his eternal bed in the Santhome Basilica of Chennai/India. He could always come back after my allotted hours were up. But then he stayed as resolutely put in his tomb as the unusually grippy LessLoss IEC connectors seated in all our gear. 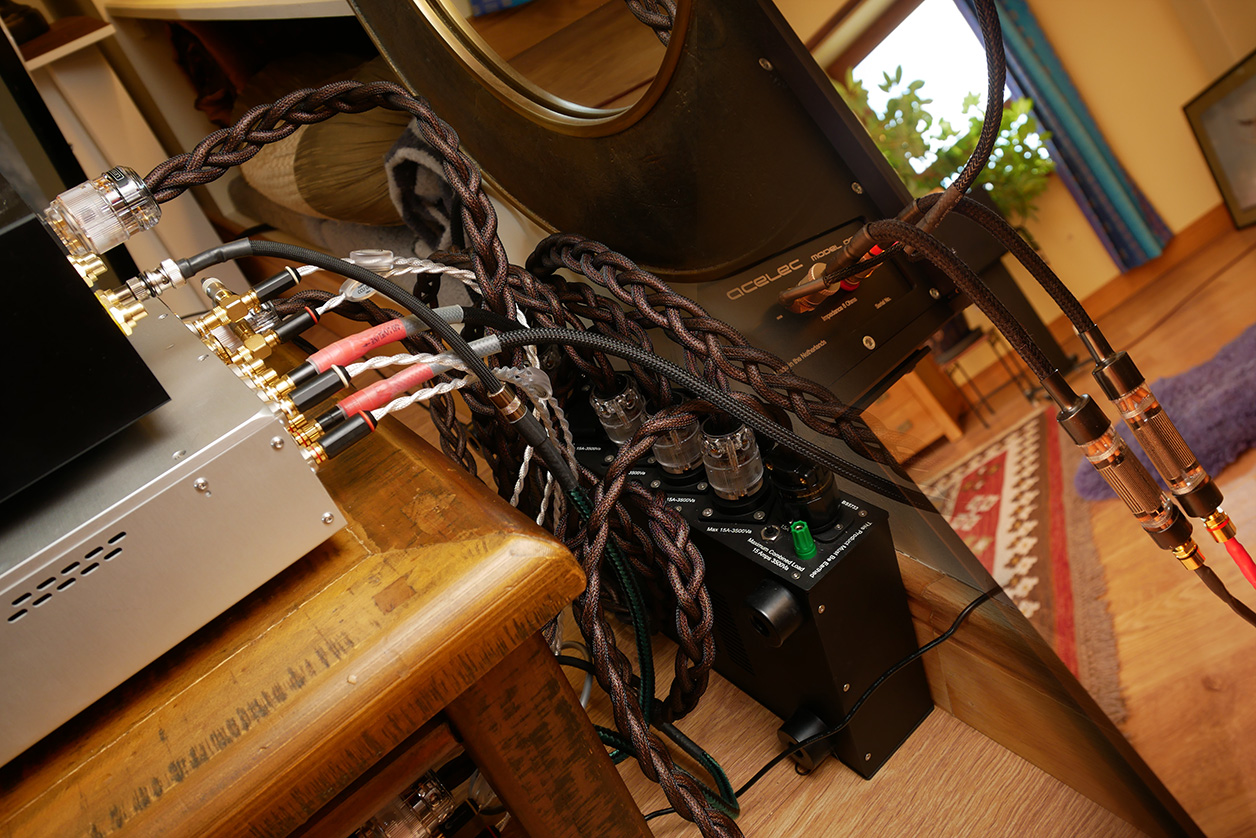 Because when I hunkered down for a serious session in the afternoon of the second day a good 48 hours past insertion, I'd plainly arrived at a higher octave of clarity already; that pristine clarity which Dawid Grzyb's reviews on different members of the C-MARC product family had always talked of. This before/after difference was unexpectedly profound now. Already my rig's performance had moved ahead of its usual status. Most potent cause was likely the updated wall-to-conditioner leash. Puritan's own is a sub €100 bargain. It spouts no pretensions beyond basic. Requiring a 20A IEC, UK wall plug and 3-meter length, I just didn't have anything to polish it up. Until now. Replacing it affected all components at once. To get more specific, I had to piecemeal my loom to see what did what. But first, more days of uninterrupted play in case more was to come. The loom had gone active on Monday. By Sunday, all connected gear had drawn more uninterrupted power and conducted signal. It was time to get serious.

To kick off, I started with something familiar, simple yet beset with certain challenges: the melancholy opening track of Placeless. The first challenge? Just how soon is one absolutely crystal on what and how many instruments constitute the faint opening rustle by way of a Kronos Quartet tremolo? It doesn't matter that after the very first listen, our mind knows what it is. What matters is whether our ears actually hear it as a massed string tremolo right from the very start. Or does prior knowledge interpolate an incomplete render? The second challenge, what happens to the solo vocal past the 1'45" break when she leans in and is played back at as-if-she-were-here SPL? With the LessLoss power loom, the string tremolo identified itself right away when it starts as a whisper. Resolution clearly reached deep into the noise floor. When the Persian voice peaks dynamically inside a throaty vibrato, a certain amount of 'scratch' or grain can reveal inside a very exposed voice. Yet nothing shifted, compressed or even minimally distorted like it did when the cheap wall/conditioner cord inserted and also thickened and made opaque the opening bars. Power cords make no difference? In a resolved system, they absolutely do. It doesn't take complicated music to say so. Just pick something well recorded and simple enough so all your attention can fix on/inside a particular element to notice the slightest deviation. Once you've clocked that, gradually pile on complexity whence these deviations compound. Small pimples become hang nails, minor cosmetic considerations grow painful.

Next I replaced the 4 x 1-meter LessLoss with our Crystal Cable equivalents whilst the main vein remained the LessLoss 3m. I picked another 'troublesome' track to highlight the glassy glitter of the Grecian bouzouki. I know its peculiar hybrid timbre between lute and banjo to easily tip into the strident, thin and blistery. Comparing renders now wasn't about which reading was most correct—I wasn't at the recording session to know—but only to describe differences. The 4th season of Showtime's Billions has episode titles like arousal template and maximum recreational depth. The first relates to the protagonist who can't achieve sexual release without S&M torture. The second is about his opponent's own limits of engaging true emotional intimacy.

With the full LessLoss loom, my recreational depth went deeper. Whilst the plucked string timbres lost none of their innate glassy energy, they gained in fullness and fluidity. Hence my personal arousal template no longer featured torture to achieve satisfaction and higher emotional intimacy. The Dutchies were brighter and spittier. If you were to ask how the 3m stretch factored versus the 4 x 1m which replaced already very good stuff, I'd call it roughly even. Upgrading my own very much budget stretch with the long LessLoss wall connection was as significant by itself as was subsequently changing four Crystal Cable to four LessLoss cords. Time to see what had stewed downstairs. Here I'd placed two more 3m UK-terminated LessLoss cords between wall and two Vibex conditioners, one for mono amps, one for the source stack. Two more 1m LessLoss ran on the amps. All hardware here had seen constant power draw for the same week. Its four LessLoss leashes were fully cooked for when I came down with the four upstairs 1-meter LessLoss. Now I installed a complete Lithuanian power loom to replace our customary Allnic Audio set. That grand total meant $18'000 worth of braided entropy; two to the Vibex power distributors, the other six to the iMac, USB bridge, DAC, preamp and two power amps.