Just one 64X clearly had an impact on my 925 and EX-M1 integrateds. Different speakers confirmed it. Two Lithuanians one plugged into the other then connected to one of the two integrated amps was also audible. The quality increase didn't skyrocket but was present. I can't think of any percentile numbers to frame this so let's stick with basics. One 64X on either 925 or EX-M1 was clearly noticeable, the second less so albeit still present whereas the third remained in the 'barely audible and not always' zone. Nonetheless, I clearly heard what just one 64X did. Then in one-by-one fashion as previously with the amps, all three 64X landed between the GigaWatt LC-3 EVO power cord and conditioner. Their application here practiced the firm assumption that power cleaned on first base should benefit everything downstream and that's what I heard indeed. The result with a single 64X ahead of my PC-3 SE EVO+ was even more significant than earlier on the integrateds though pleasantly familiar in its benefit. The second X64 upped the effect slightly more potently than on the the amps. The third was quite undetectable regardless of music and hardware. With my road map in mind, a single 64X just before my power conditioner stayed put, the other two now connected to my digital devices. 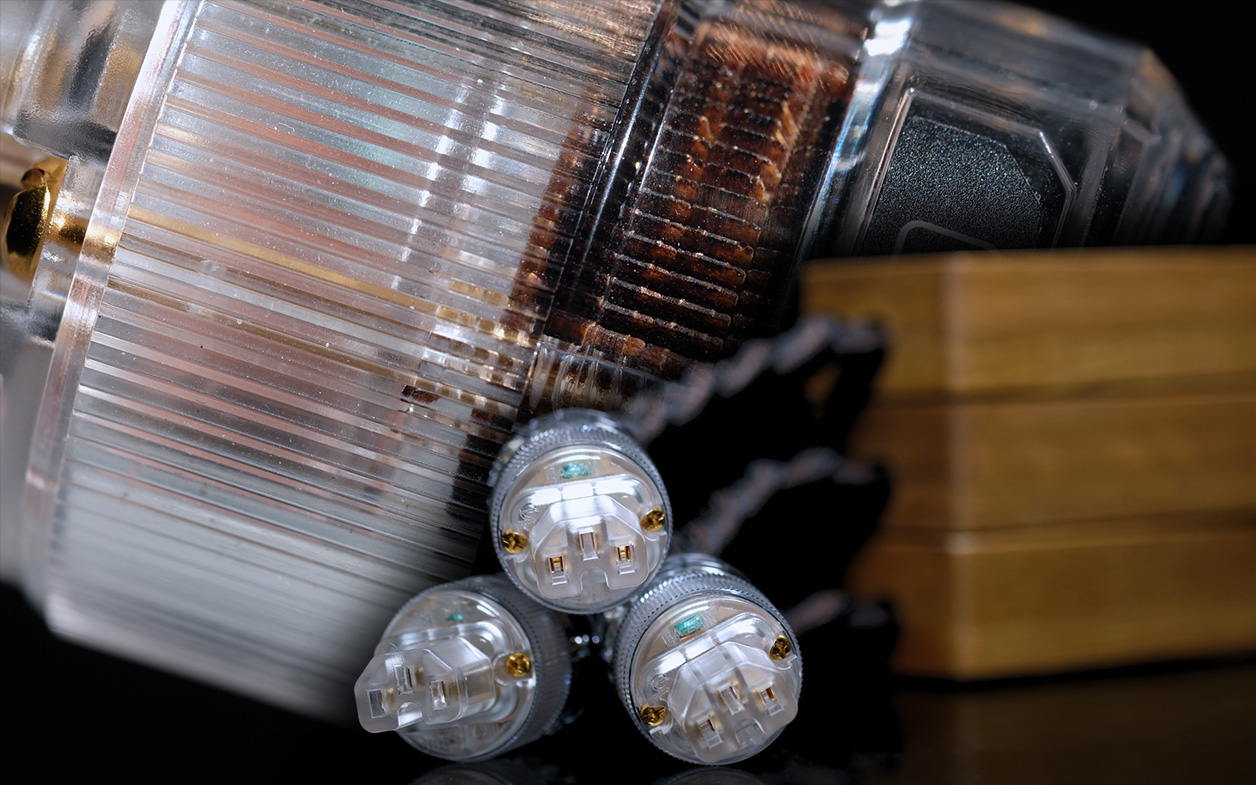 Of all experiments conducted thus far, three 64X in these specific locations were most effective. The quality spike was noticeable and results were once again familiar. Using the wooden trio on the decontamination job as early as possible still made the most sense by blocking incoming junk from moving further downstream. It's fair to say that my direct-heated triode DAC is inherently sensitive to power and so is my fidata renderer. To double-check my findings, one X64 shifted from GigaWatt's conditioner to the 925 again and the overall effect diminished a bit to reassure me that closer to the wall outlet was best.

Being aware that three 64X or more are a rather costly luxury option, several experiments with a single unit connected to one machine at a time all fed from the PC-3 SE EVO+ were next. The Lithuanian noise-killing effect moved sonics up in each case albeit at different strengths. The Pacific DAC benefited the most, the power conditioner next, the server/rendered next and last my amp. If the budget fits only one 64X, the best place in setups like mine will be just before the DAC or even earlier, like prior to a power conditioner/strip/regenerator. At this point I was ready to wrap it but just in the nick of time, Louis advised to try one specific triangulation which I did. Now things gained momentum. Knowing how well my DAC responded to a 64X, their direct impact on this specific machine just had to explore bypassing the power conditioner altogether. This meant no surge protection but for the sake of ultimate sonics, I took the risk. To isolate contributors, the GigaWatt fed my DAC via one LessLoss C-MARC and a second cord of the same length then piggybacked by 3 x 64X plugged directly into the wall outlet became the comparator. This enabled fairly quick swaps and the results were unexpected.

It's worth knowing that all other components remained connected to the GigaWatt so just one component bypassed it. Yet the difference was anything but small. The conditioner connection sketched out images inside noticeably smaller frames, moved them to a greater distance, rendered them grainier and shifted deeper into insight away from satisfaction. The wall-direct connection sounded fleshier, more organic, a bit rounder and fuller, more musical and civilized. At first it also seemed to be slower and darker due to a more pristine backdrop. However, this impression faded once I cued up a repertoire filled with outrageous bass slam and treble energy. The staggered C-MARC loom was easily as agile as the GigaWatt but bigger, more present and tangible. Yes the very costly DAC lost its surge protection but gained extra moisture and spatial presence for a substantial increase in listening pleasure. Most importantly, it had me wonder whether this was how this machine should sound in the first place. Was this the very first time its original highly organic yet also exceptionally resolving character had emerged by no longer being subjected to the GigaWatt's influence?