I decided to reverse the order and start with one 64X on an amp until it had three in-line. Once this base line was set, the loaners attached in the same additive fashion just after the LC-3 EVO power cord in front of my power conditioner. One module then remained there whilst the other two fed my transport and DAC respectively. Then a single LessLoss moved from my big GigaWatt cord to the amp again which resulted in all three main components being not stone- but fire-walled though not the power conditioner. This exercise would identify the most suitable place for my loaners I thought. At one point I got in touch with Louis who pointed out that the best location for his Firewall 64X filters was just before a digital source connected directly to a wall outlet without any additive active conditioning. I happily obliged which indeed changed things a lot. But before that happened, my PC-3 SE EVO+ remained in constant use. 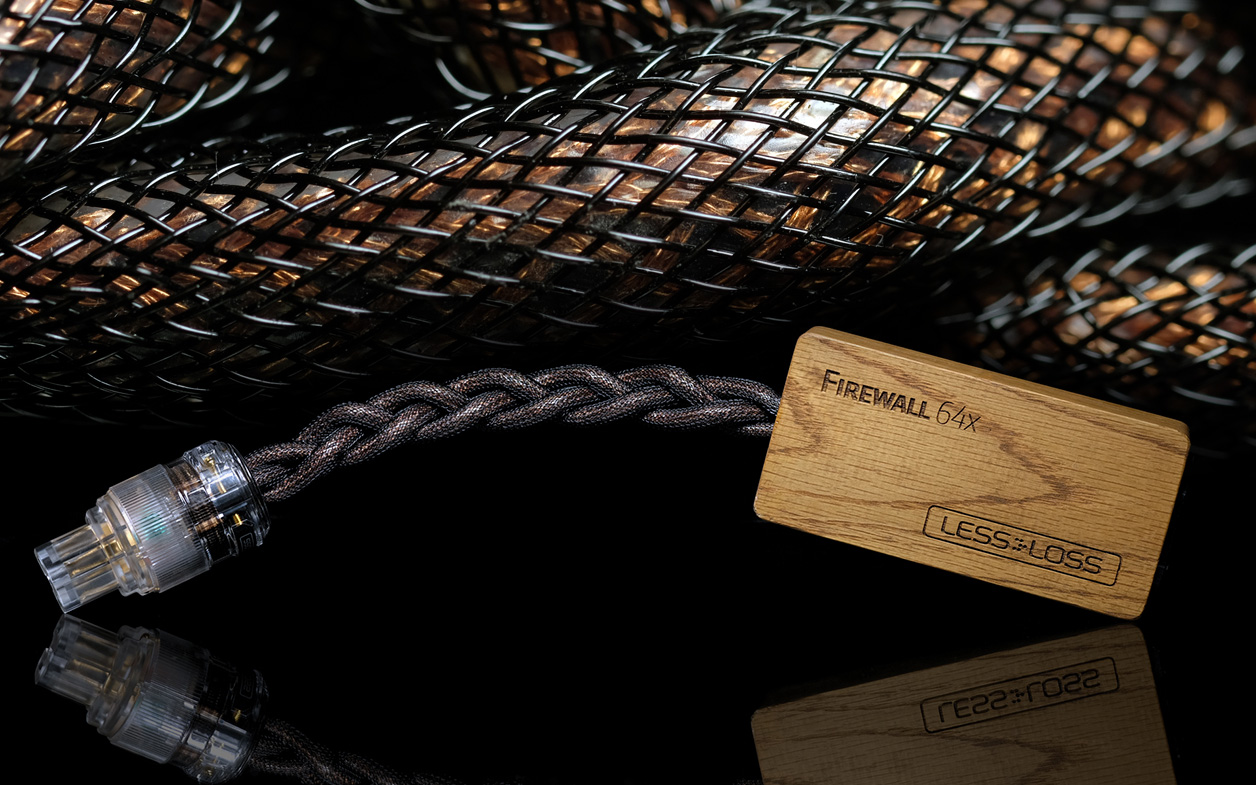 Before we move on, I'll backtrack a bit to my previous LessLoss adventures. Prior awareness that they were into noise rejection surely helped me with this assignment. Previously their power cords and speaker cables had introduced clear and meaningful changes quite specific in their action. Both types audibly lowered the noise floor of my system to result in a darker backdrop, easier comprehension of nuances and more sorted imaging. Images themselves became rounder, more tangible and finer separated. All this led to more easeful music consumption on my part, less choppiness in favour of greater textural complexity, edge replacement with a livelier but softer render, dryness control off but increased tunefulness on plus organic finishing touches. The C-MARC morphed a stuffier staler vibe into something more open whereas their thorough clean-up of grain enhanced the visibility of musical matter suspended in the air which naturally resulted in increased insight delivered more effortlessly. If singled out, each measure alone would be of minor importance. Combined altogether, they led to a clearly greater musical good without paying in tonal balance shifts.

Months of daily C-MARC usage provided enough evidence to understand how their unique 'flavourless' attitude is the core virtue. On a very primary level, the two functionally different Lithuanians act as top musical tools for any hardware. Once connected to a new incoming product, they allow it to speak for itself which saves time on my end. A pristine canvas and the revelatory power of C-MARC products are useful in my daily work, hence their 'flavourless' quality is a major pro not a con.

Although designed to perform the same cleanup job, the LessLoss C-MARC power cable proved to be more potent than its speaker cable sibling just as power delivery items always tend to at my place. Now we're ready to discuss today's arrivals. The short form? All three quickly proved to be equally as effective and sonically cut from the same cloth. It took a mere two swaps with/without to realize that the well-known silencing game was afoot again. Hence everything I wrote about the C-MARC power cords and speaker cables applied to the 64X. Their action was familiar, comforting and increased in potency when in series. A single 64X connected to one end of a LessLoss power cord then to my Trilogy 925 made this machine's bold, thick and dense character more explicit which I took as a good start. The sensation was quite comparable to having a like-'voiced' power cable from a substantially higher tier which led me to conclude that noise rejection was amplified by today's oak appendix. To exclude random compatibility, the Lithuanian power cord replaced by Audiomica Laboratory's resulted in similar observations. With this connected to just one 64X, the 925 integrated sounded chunkier, warmer, more polite, a bit slower but with bigger images. Without the Firewall the sound was coarser, texturally plainer, less precise and background noise was a fair bit stronger. That wooden box on the short leash truly did something!