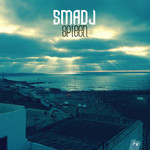 Just so, five years later Liu's bigger deck celebrated progress. It offered perfectly comparable though not identical performance for a fraction of the wallet grab. Chief amongst doing certain sonic items different were textures and low-frequency gravitas. On the first, Vega applied more gloss or sheen. This gave the musical scenery a very vibrant wet look. Think of a movie director hosing down a street before shooting his night scene. It gives the asphalt that reflective film-noir quality. On that count the Vision DAC-1 was drier, hence less spectacular or enhanced. This eventually suggested itself as the more natural sound. It lacked the hyper contrast of punched-up 'retina display' pop. On gravitational bass action, Kinki's bigger power supply dug deeper. For bass-intense fare like Smadj's Spleen, this could mean a virtual maelstrom of massive bass waves setting up a near claustrophobic ambiance for the edgy accordion riffs. On Omar Bashir's "Ambient Oud", the suggestive expanse of a desert panorama seemed to push against our sidewalls as though looking for even more space to occupy. If you know the benefits of low bass on soundstage expanse, realism and mapping markers from subwoofers—our Zu Submission with a 10Hz low-pass adds just a bit of support to the Cube Audio Nenuphar's sensational single-driver 30Hz—you immediately appreciate how this quality worked for Kinki's vision.

For its colour palette, your mind's eye would also see very inky black values. This tracks the fact that more bass creates more virtual black, more treble injects more white. Administered excessively, too much bass gets dark, heavy, murky and ponderous. Too much treble causes leanness, wispiness or nervy forwardness. However, just the right amount of bass weighting can be very effective during the race for ever higher resolution. That race is our hifi version of the novice photographer's obsession with mega pixels. To balance out potential sonic pixilation from the artifice of unnatural detail, little is as effective as the anchoring action of well-articulated powerful low bass. It grounds the presentation whilst giving tone colours that richer saturation which always accompanies deeper blacks. It works against the bleaching of extreme detail from a spot-lit treble. 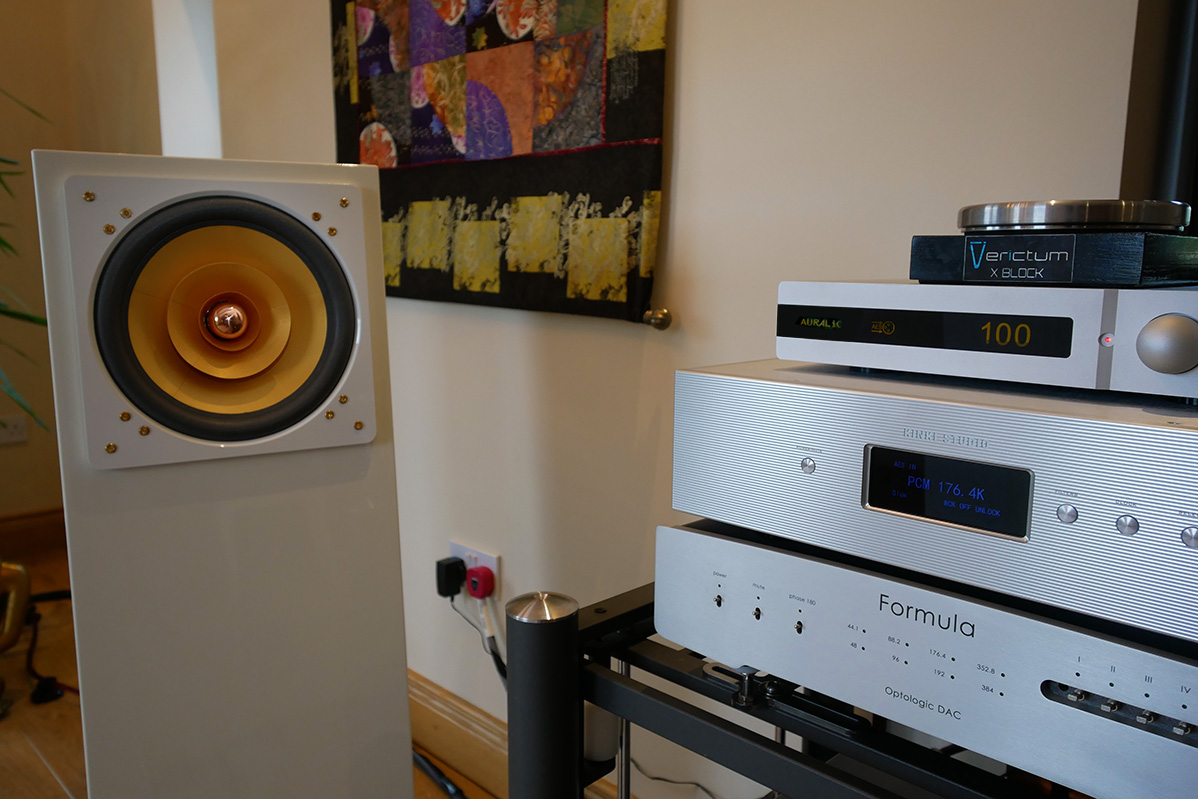 In my DAC experience, gravitational earthing nearly invariably relies on beefing up analog output stages. DACs which direct-couple their converter's output to the analog plugs—TotalDAC's discrete R2R ladders of their Direct models come to mind—tend to emphasize speed and transparency; more electrostatic than dynamic speaker. It's likely why as a voicing alternative, TotalDAC offers their d1-drive. That's Vincent Brient's unconventional external preamp without volume control and only optional voltage gain. It increases current drive between his volume-controlled Direct DACs and a client's amp. In effect, it becomes the analog output stage which his Direct models omit. By focusing strongly on his machine's analogue half, Liu's voicing also differs from Metrum Acoustics direct-drive scheme. Similar to TotalDAC, that emphasizes ultimate resolution, separation and timing exactitude. 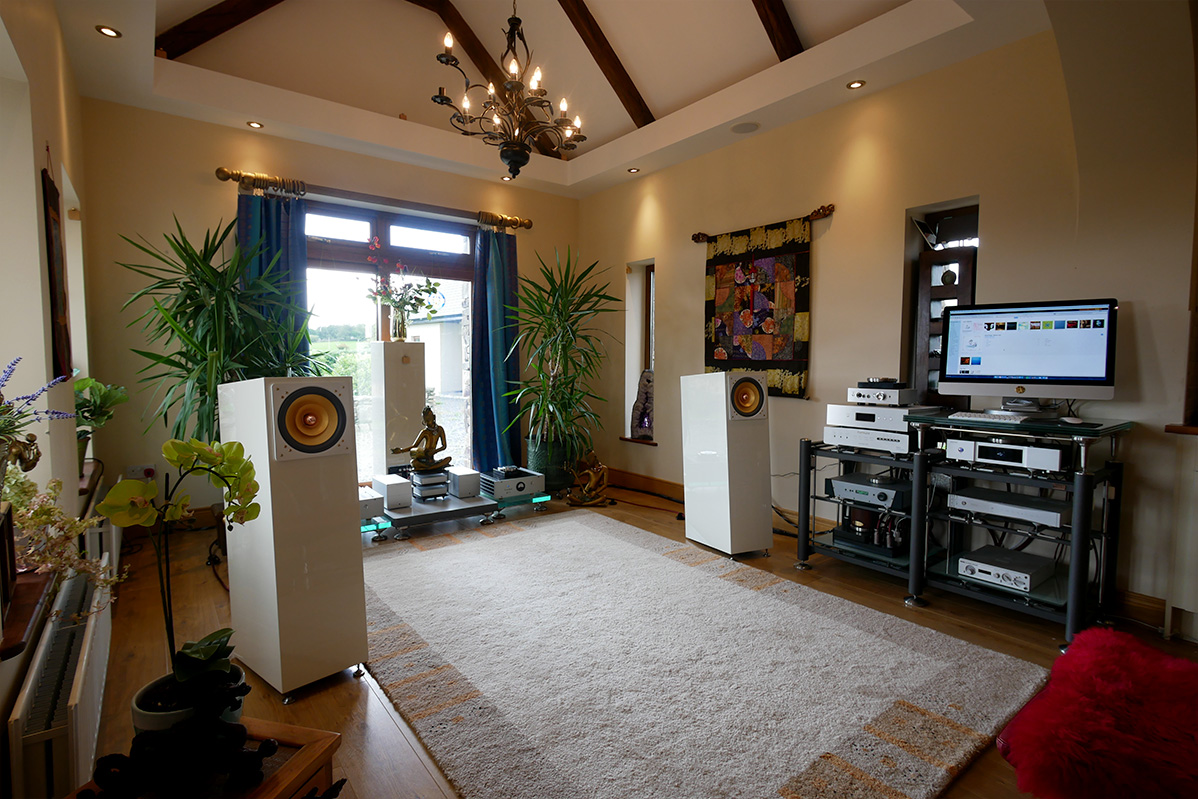 Kinki's Vision DAC-1 instead prioritized tone density, colour saturation and general earthiness/groundedness. The name's vision prefix applied itself less to virtual eye sight as in, mentally scanning a soundstage. It applied itself far more to believing its illusory overlay on our venue in the feeling dimension. That spoke to my belief that a presentation geared at vision via great transparency works with treble detail to the mind's observational/analytical powers. A presentation aimed at participatory feeling works with the bass and its effects on tone body and image density. At least in my experience of it, the 'Vision' in DAC-1 then didn't work in the virtual seeing dimension. It worked in the feeling domain as vision of a different sort.

Tekkie detours. With our new Soundaware D300Ref offering a word-clock output and the Vision DAC-1 a corresponding word-clock input, personal curiosity demanded that I connect the two via a proper BNC-terminated digital wire. This slaved the Kinki DAC to Soundaware's USB bridge. Now both worked off the same clock; one not two digital heart beats. As a personal first, I had no idea what to expect. Frankly, my inner cynic expected niente. I could readily imagine demonstrable benefits in multi-channel recording setups. Now numerous complex digital workstations must get sync'd via often long cable looms. By contrast, our domestic 2-channel affair was starkly simplistic. As such, what did it possibly stand to gain? Nothing ventured! With one press of a button activating/defeating this master/slave relationship, it was child's play to shuttle back and forth. At right we see how the display confirmed WCK ON LOCK. A brief push on the frontal power button engaged MUTE. Here I did it just for show. With our Wyred and Nagra preamps having that function on their remotes, that's how I'd usually invoke mute when the phone or door bell ring. To give myself the greatest chance at hearing any difference, I picked some premium ECM type files: minimalist arrangements well recorded. They didn't overwhelm with complexity, obscure with dynamic compression or undermine recorded ambiance. 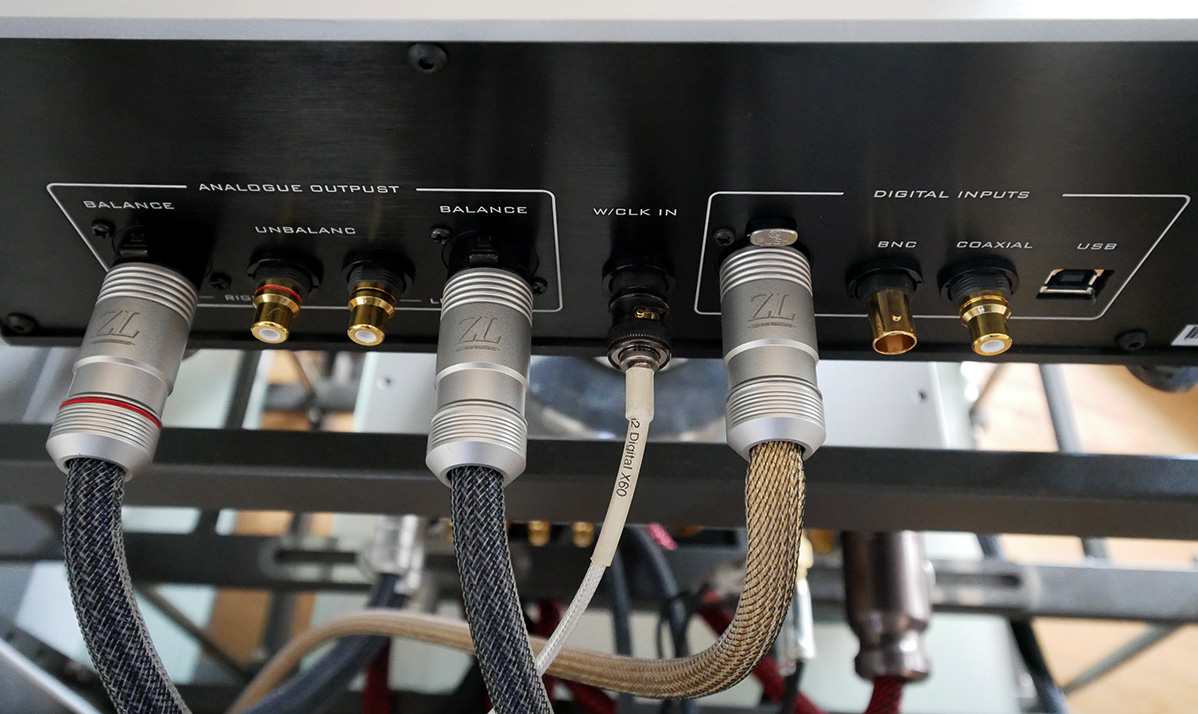 Mostly this felt like an exercise in active imagination. The small area not covered by my qualifier concerned challenging vocal peaks, the high registers of close-mic'd solo violin played full throttle and brightly hammered far right-handed piano tinkles with their propensity for the glassy. On any of those, word-clock engaged felt easier and less stressed. In short, if I noticed anything, it seemed to operate as marginally finer treble purity. Mostly I thought that engaging this feature played to audiophilia's anxiety about what complete strangers might think. They bring their various beliefs to bear and suddenly "going all out" looks more serious, credible and fully committed. You know the type. "What, you don't run an external word clock? Geez, how could I trust anything you've got to say about your digital now?" If that's you, have at it. I would simply suggest that prospective VIsion DAC-1 buyers for the home not stress over this feature. Its contributions to actual sonics rather than self esteem seemed marginal at best; at least to me. 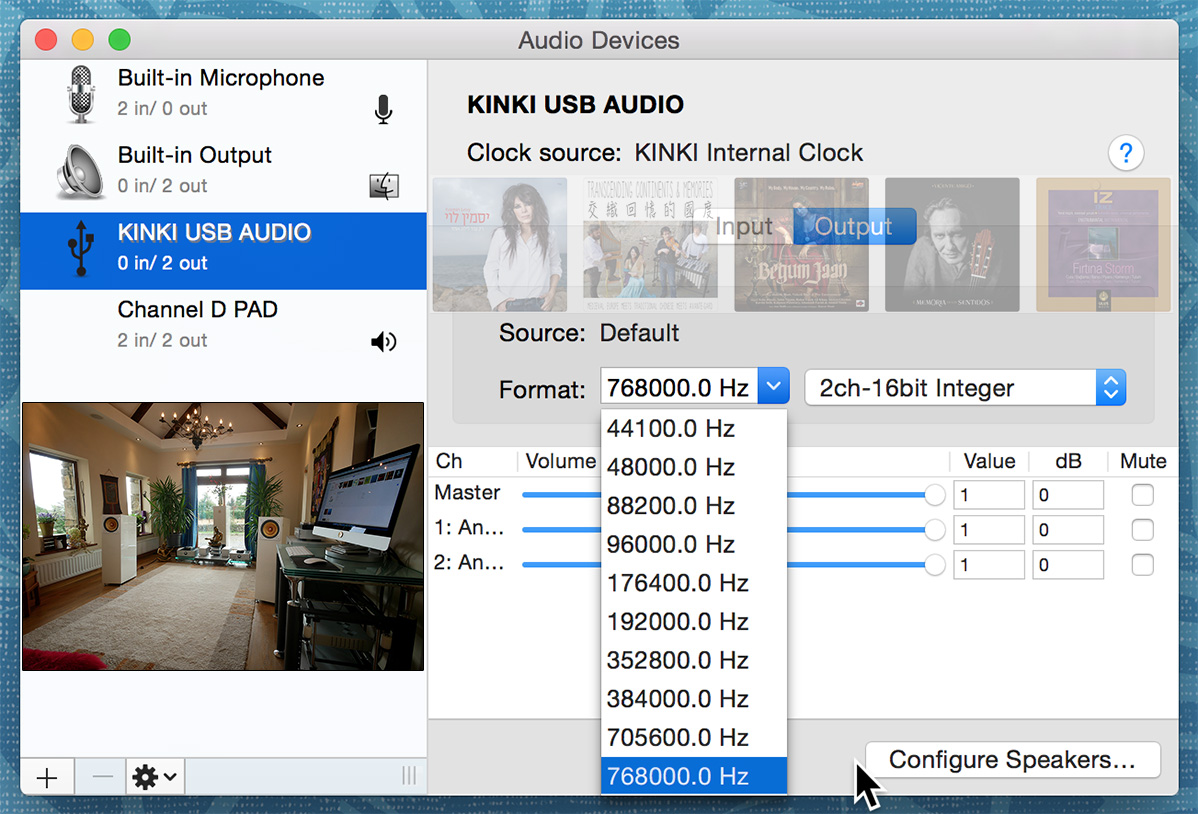 Ditto worrying over internal vs. external upsampling; or why PureMusic recognized the deck as 768kHz capable whilst the most current Audirvana Plus 3.2.8 only saw 192kHz. These numerical matters and digital filter choices were the merest of trifles compared to the actual truffles of Kinki's core traits. And those dominate regardless. In a handful of words, they were chunkiness, gravitas, robustly anchored very expansive soundstaging, well-developed colours and dense tone. On the material front, Kinki add robust construction, fine finishing and understated cosmetics. On the human support angle, there's Vinshine Audio's always-on Alvin Chee. He fulfils the role of Singaporean Internet dealer with Western-trained expectations and fluent English. 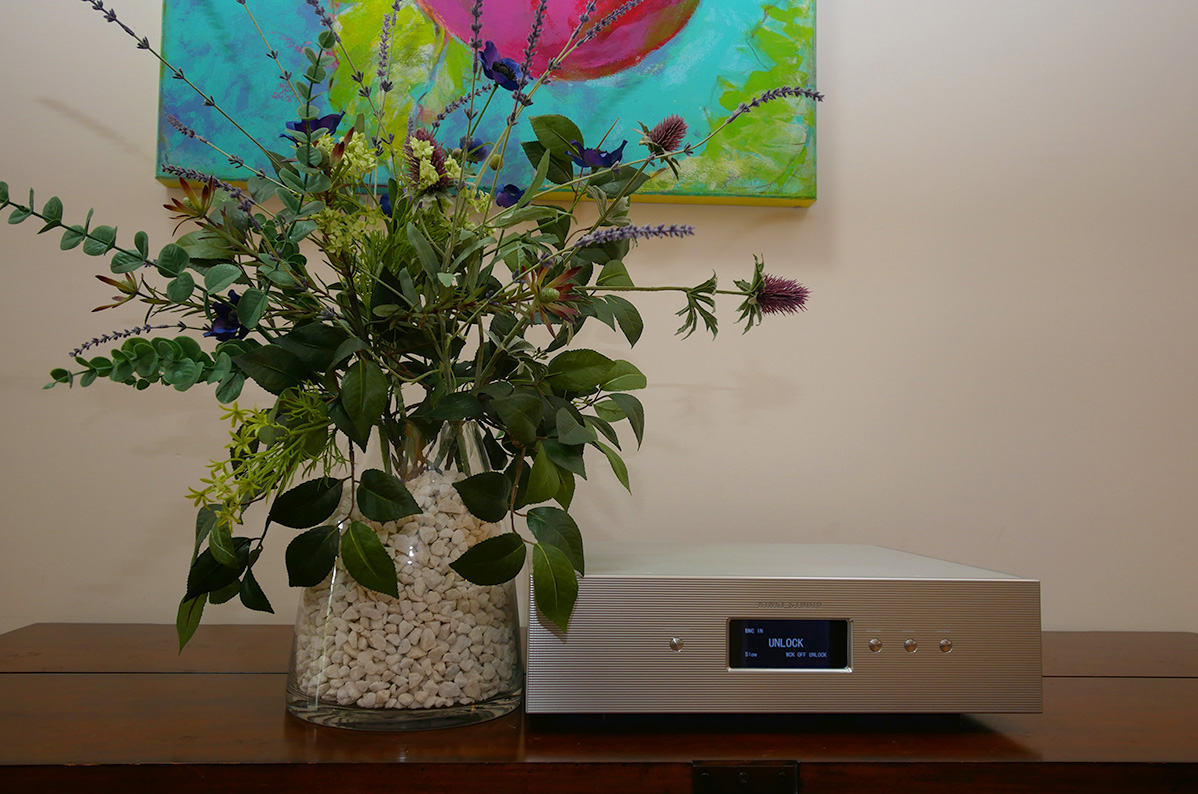 Unlocking the Vision DAC-1. Having at this juncture reviewed one EX model and two Vision models—the EX preamp and monos hadn't yet landed—my one and only disconnect with Kinki the brand was designer Liu's segregation of his portfolio into two different ranges based on sonic profiling. As I'd learnt after publishing my Vision THR-1 review, Alvin had been similarly confused when my aural comments clearly spelled 'EX' just as they had for the M1 integrated. "Interrogating" Liu as he put it, Alvin learnt that the THR-1 had in fact started life as an EX not Vision model. What's more, its voicing had subsequently been moved still deeper into EX turf when headfi customers asked for it. Alvin's branding of the headamp as Vision model was due to just a print error. A rear-panel silk screen said 'Vision' not 'EX'. In that sense, my DAC-1 sessions were déjà vu all over again. What to me had already become Liu's signature voicing of robust fully embodied sonics with a minor slant toward the flattering also applied to his Vision converter. In that, it shared much with our tube-buffered Fore Audio DAISy1. That sold for €6'000 when the firm was still active. Three years later, the same coin could buy 4¾ Kinkis without relying on thermionic valves to achieve very similar sound. To any proper deflationist, that should be very attractive news. So far my Kinki score was three out of three without a misstep. Quite the hifi hat trick. 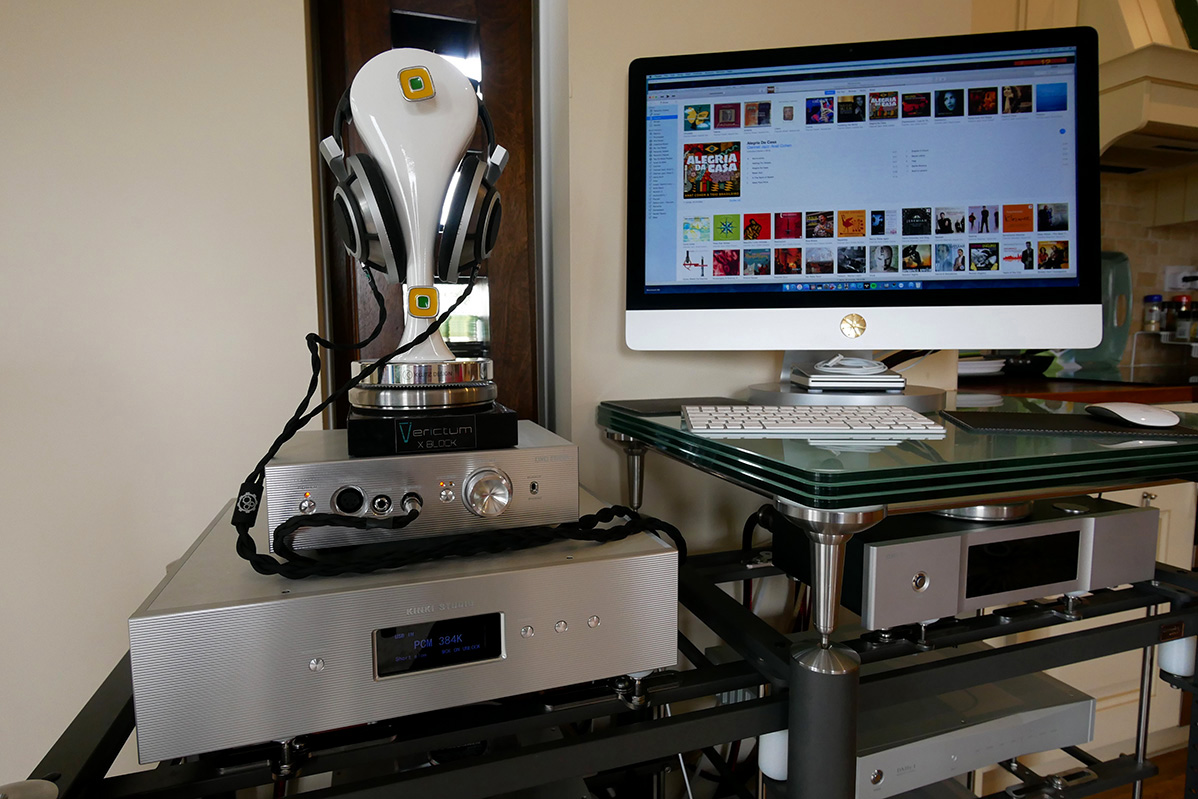 Of course that meant an ideal partnership between Vision DAC-1 & THR-1. Sennheiser's high-impedance HD800 were examples of a perfectly served load. They straightened out their usual bad posture—top-heavy, light in the bass, too incisive in the upper presence region, ultra airy/spacious at the expense of body/weight—and transformed into far better representatives of Germanic statement efforts. None of their overdone brightness and pixilation made it through the Kinki treatment. Their signature brilliant soundstaging and copious fine detail did but now those were supported by a proper bass foundation, drier textures, fuller body and with it, a more relaxed easy overall feel that was far more conducive to lengthy sessions. Over and out.