To chase more differences, I pressed into duty the matching soul mate, Jay's CDT2 MkII transport.and spun up the otherworldly new Joël Gare album Des Pas sous la Neige. Its opening track features his clavicloche. Over twenty years, he carefully assembled it of custom-tuned Swiss cow bells to arrive at 3½ chromatic octaves. It's actually the "Transhumance et Transcendance" second cut which I honed into more but even the opener was telling.

Like any proper bells, one hears oscillating metal and signature sprays of harmonics, some short-lived and piercing, others mellower and more lingering. They go all scintillatin' and shifty like swarms of tightly synchronized birds laying down wickedly twisting flight patterns. If you turn up the water pressure on a fountain's jets, it sprays higher. So for different gear which will get more or less of this overtone action, particularly the mysteriously tapped clavecin sounds on track two. It's all about the most spiderwebby stuff which hankers for premium tweeters and sources with brilliant resolution in the high freqs. 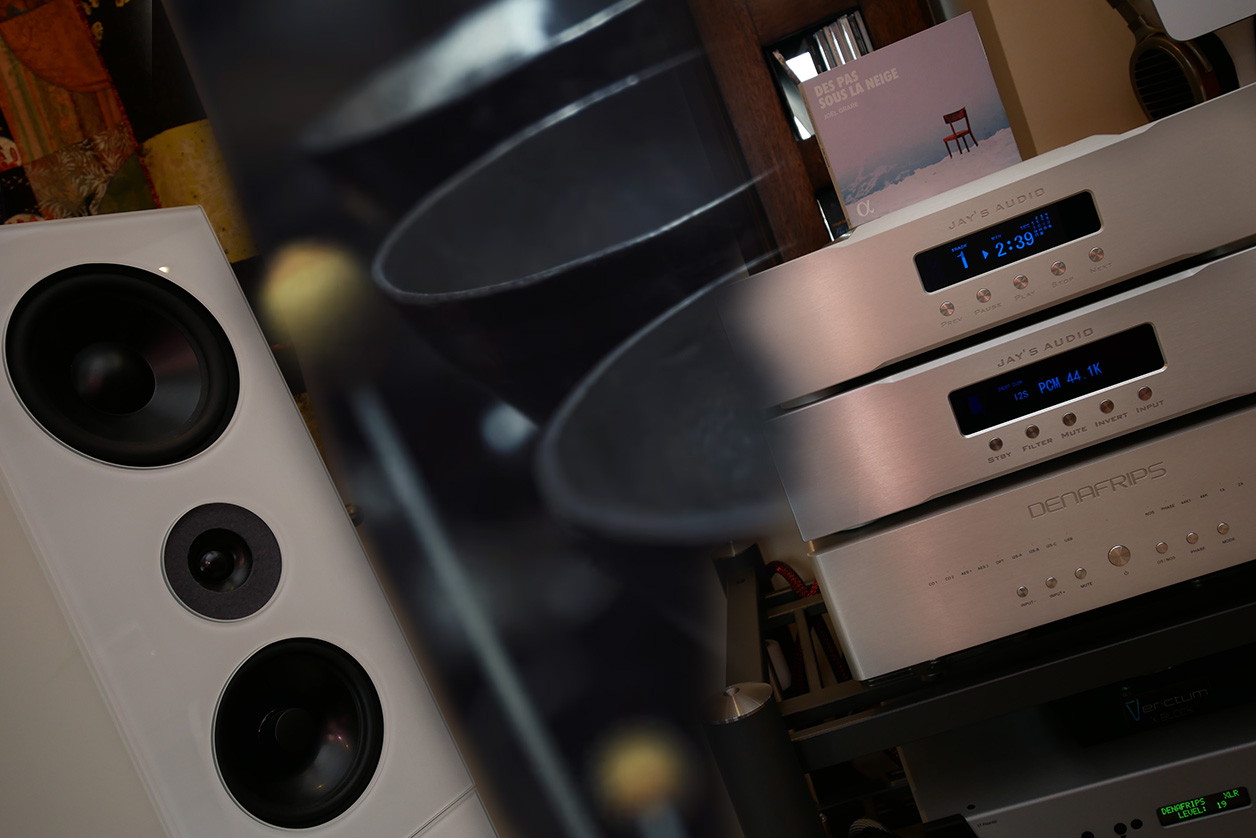 Swapping converters to and fro, in this particular discipline the Jay's pulled ahead. It was the keener tracker of treble plankton, harmonic flares and wispy stuff happening on high. This again isn't about knowing what sonnailles sound like in Alpine meadows—with 8 years in Switzerland, I had occasion to strike and lift some, the latter a big surprise about the strength required to be a grass-plucking cow and wear one all season—but about observing which converter drew the more complete picture of rises and ring-outs. No doubt that was the DAC-2 SE. But you might think, so what – I don't listen to funky cow bell jingles.

Fair enough. But you'd overlook how the very same quality has proper repercussions for regular music. Consider this folksy/Jazzy dialogue between Turkish ace fiddler Nedim Nalbantoglu and Romanian accordionista Roberto de Brasov from their L'Odeur du Vent album on the adventurous label al sur. Pay attention to how, over the course of the tune, the violin's timbre shifts from the sonorous to the more scratchy and back again as though playing various percentages between wood body and metal strings. Here the fancy term is tone modulations. The best musicians go to great lengths to expand the possible timbres obtainable from one instrument. As one keys into this aspect more deeply, one notices how even within a shorter melodic phrase, certain tones change timbre. Since timbre is a function of overtone content and distribution i.e. how the various harmonics are weighted, it follows that the most expansive recorded tone modulations rely on a hifi's ability to track harmonic changes with alacrity.

As you'd expect from the tie-in with the Joël Gare CD, on that musician's discipline, I thought the DAC-2 SE to have the edge. And before you think that spinning CD is so 20th century, check out actual  user percentages in this John Darko feature. "Reports about my demise have been greatly exaggerated" is what the lowly compact disc would say about that. Obviously tone modulations apply to the human voice as well if not more. Consider what Nella does here in a duet with Javier Limón on "El Fin de fiesta" from the White Sessions; or here on "Tonada de luna llena" made famous by Caetano Veloso. One hears emotive range from the coquettish to the plaintive, from the melancholy to the jubilant and more, all without understanding a word or even being held back by massive data compression.

With this type material at full resolution, the Terminator played it a bit thicker and denser, the DAC-2 SE a bit more quicksilvery – small sideways moves rather than rungs up or down a ladder.