But first—before I overstretch a bow, misfire an arrow and set up false expections—despite its fantastic motional feedback, the SB1 remains box bass when we consider how it behaves inside a room. It'll be different depending on where we sit and what modes it rides. One may even have bass hotspots outside the room due to how powerful low frequencies migrate structurally. The only woofer loading I know of which begs to differ is Alex Ridthaler's RiPol. We'll soon read more about that with Martin Gateley's pending DSUB 15. Like the already reviewed ModalAkustik MusikBass and Voxativ Pi bass, it eliminates the side walls, the standing wave at a right angle to its woofers' axis and even attenuates front-wall interactions a bit. Those things the traditionally omni SB1 can't do. 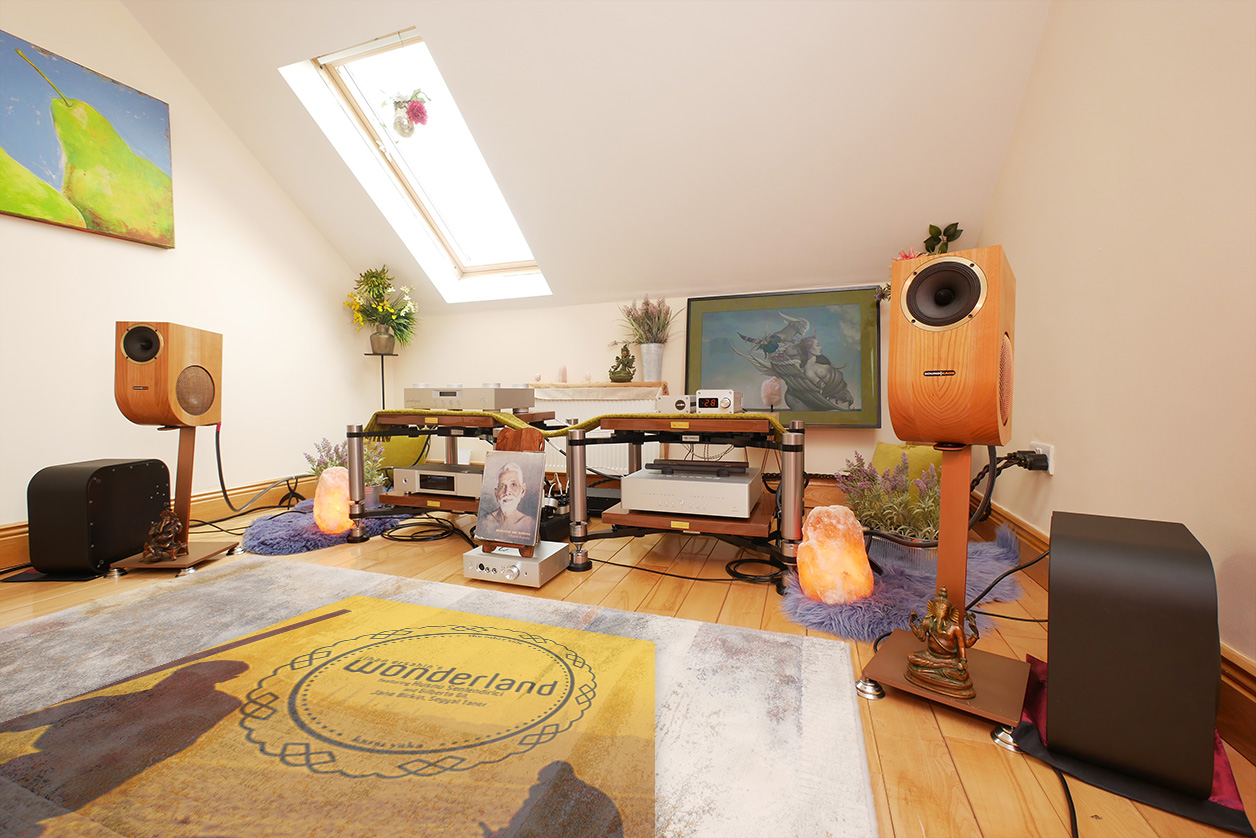 Still upstairs, my very best setup moved the Dutchies firing out right adjacent to real brick'n'mortar not lossy plaster walls. This created nearly instantaneous first reflections so still tightened up the already very good timing. With passive radiators currently making a comeback even in subwoofers, old hifi slang referred to them as drone cones. Doing a quick but justified free assocation, some of it also applies to the bass of most passive loudspeakers, even lesser subs. This may not be as obvious as it reads. Being the norm, our hearing has long since adapted to sloppy bass. It's in its fortuitous absence that desire for better is recognized then realized. Now we hear a fringe benefit which turns out to be anything but fringe. As our bass improves to move away from the drone-cone effect, so does the rest of our bandwidth benefit. There's less haze overlaying it, less blur, bloat and noise. Some swamp drains. Improve what happens down low and what's higher up can't help but improve with it. As below so above. The SB1 are that sort of sub. They raise our listening IQ. We hear more and do so more easily, in areas that have nothing at all to do with bass though of course the bass is included. Like the white balance in the above photo, everything brightens up. Because of it, one needn't crank the volume. Excellent visibility starts already at the bottom of its range. Perhaps that's actually the biggest benefit of all?

Now it's time to really change rooms. Before you ask, yes the Grimm subs overshadowed and outshone our Dynaudio. At nearly x 10 the ask, they should have done but I'd actually not expected the less-distortion difference to be so obvious. I really didn't think it was from now having bass pumps in two different locations. To be utterly certain, I'd need a second S18 and make that comparison. Not today. What I will say? With a 40Hz handover, the difference with our Dynaudio was smaller than at 80Hz. Perhaps an allowable interpolation is that as the hinge frequency increases, dual subs become more important? As an aside, running the Grimms firing up gained them output. With the same input signal they sounded louder. Floor coupling with its serious time smear and big resonance made it so. In that sense, injecting a lot of distortion played louder; a bit like port loading.

In our 6x8m downstairs room the speakers do ~33Hz/-3dB with hidden 4th-order bandpass 8-inch carbon woofers whose loading is popular with car subs. Bolting on extra music not movie bandwidth whilst expecting the seas to part would believe in miracles. You'll have to hand-pick tracks with significant content at 25Hz to make your subwoofers meaningful. Improving the quality of your existing bandwidth is more primary where it currently displays elements of the drone zone. You'd simply want a higher crossover point to maximize that. In this room, Alain Pratali's loading rare in the high end exhibits no flaws. Hence the Grimms couldn't book a real qualitative argument in their favor. What in this context was their painfully expensive contribution—costlier than the speakers themselves—limited itself to the occasional depth-mining track. With my preamp offering a remote defeat of its low-pass output, I could easily compare with/without sub from my red chair with one push of a button.

Mixing it up with heavily percussive examples, the Grimm Bros.' success now was their strict refusal to fatten up anything. They just built out a bit of reach to fully cover certain extension stunts. This extra quantity didn't come at the expense of quality. Also, here the subfloor couples to a concrete foundation so the advertised upfiring orientation no longer proved problematic. A barefoot test still felt some minor vibrational transmissions so out came two trios of Hifistay HardPoint footers and the subs migrated from their former carpet positions onto the parquet as shown.

As far as it went, that did the business. Unlike upstairs, here the sub addition was simply a stunted exercise in overkill or lily gilding. In conclusion, Grimm Audio's low-rider SB1 extricated from between the legs of their active monitor could have a real future elsewhere if our clearly capable Dutch team decided to add the still necessary features. In that sense, my review played proof-of-concept confirmation. This advanced motional feedback tech deserves a wider audience. Home-theater users whose pre/pros already include all the necessary filter smarts needn't wait. Likewise for owners of Bel Canto Black, Black EX and e1X DACs with hi/lo-pass filters embedded in the digital domain including bass gain trim. For the majority 2-channel crowd however, we still want for the usual amenities or otherwise must insert our own filter and gain controls into the LF signal path. Given Grimm's elite positioning on price, that's an unrealistic burden on the user. As is, I don't expect many to buy into it. But should the SB1 get made over as a general purpose machine, it would instantly catapult into the A list of uncompromised subwoofers fit for ambitious 2-channel systems.

Since I did have the necessary outboard featurization on hand—accepting this assignment committed me to making sure I did beforehand—I'll actually be very sorry to see these SB1 depart my smaller upstairs rig. Where it matters most, they're already all in with truly ace performance. And yes they do cost a lot. But so do Rolex watches which nobody complains about. Where Rolex is too dear, there's always Timex.