DS-10 : H1. Like they had against Burson, the Italians out-functioned COS Engineering with app-driven network audio. They also added XLR outputs, a USB-A host port, Toslink N°2 and Bluetooth. Like Burson had, COS retaliated with balanced headphone drive, here via combo XLR3/6.3mm ports. Display sharpness, display data density and converter adjustments again fell to the more complete DS-10. Again Gold Note packed the most loaded one-box featurization for that '+1' of a 4-in-1 over other 3-in-1. My desktop ear speakers are Final's D8000 planarmagnetics. The COS drove them through its Texas Instruments IC into a custom ALO Audio balanced leash, the DS-10 through its TI chips into Final's twisted 6.3mm cable. Input signal came from files hosted locally on my HP Z230 workstation. They were reclocked and dejittered by an Audiobyte Hydra X+. Its BNC and coax sockets had both converters live in parallel. To compare, all I had to do was reseat Final's twist-lock ends on the ear cups.

This was a very close showing on general tonal balance, subjective detail density and soundstage size. The only meaningful offset was that the Gold Note felt a bit more distant, the COS closer up. With transducers hovering within inches of my ear drums, such descriptions aren't literal. They only show that slightly leaner/airier seems to come from farther back whilst a bit fuller/thicker appears nearer. Working my way through a few live tracks of Mayte Martín's well-produced and musically gorgeous Cosas de dos album, that was the primary distinction.

It took heavier artillery with pounding drums and infrasonic synths like this Jamshied Sharifi cut from A prayer for the soul of Layla to work out that in balanced drive, the COS had an edge on dynamic impact and low-end crunch. On balance then, I'd give the H1 a small lead as dedicated DAC/headphone amp. Once again however, the DS-10 kept up unexpectedly well and close. The upshot of my headphone trials is that Gold Note's 6.3mm port is no convenience token to tick off a shopping list with a 'got it' check. It's a full-fledged serious feature.

It means that Gold Note's compact and handsome DS-10 really does empower dedicated headfiers to do it all with one box. Meanwhile back upstairs, I set up the DS-10 with our April Music Stello S100 MkII. That became my comparator amp to the stereo PA-10. At $1'200 when new, the Stello is our equivalent compact with balanced inputs. This older Simon Lee design is class A/B doing 50/100wpc into 8/4Ω. Unlike for the PA-10, no 2Ω rating is known. The Stello also can't be bridged. If it hadn't registered yet, the PA-10's power doubling into 2Ω stereo is very uncommon for such a small amp that's not class D. In our smaller upstairs system of course, big low-impedance power doesn't make or break the deal. Here even the 25 watts of our tiny Bakoon are plenty. At €6'000, the AMP-13R simply was well beyond the comparative pale. So it remained benched.

Against the Korean, the key differences I tuned into were treble energy and lower midrange intensity. Simon Lee's preference is for Burson's Classic not Vivid discrete operational amplifiers. That and his self-declared 'soft power' aesthetic mark him as a fancier of a distinctive bottom-up perspective with milder transients. He champions a mellower darker fuller sound. It reminds him of the earlier days before "resolution über alles" became the new bumper sticker. It thus was little surprise that Maurizio Atterini's amp would be the more explicit in the presence and brilliance bands. Surprising was his greater compensatory weight in the lower vocal range. That prevented an upshift in tonal balance. The upshot was a spatially more informative teased-out rendering with more fire and sparkle on plucked strings, more frisson on sharp transients and more density right above the upper bass. In some ways, the Stello amplifier stood in for the earlier Burson showing except that Gold Note's added HF detail and ambient cues now paralleled a richer vocal foundation. 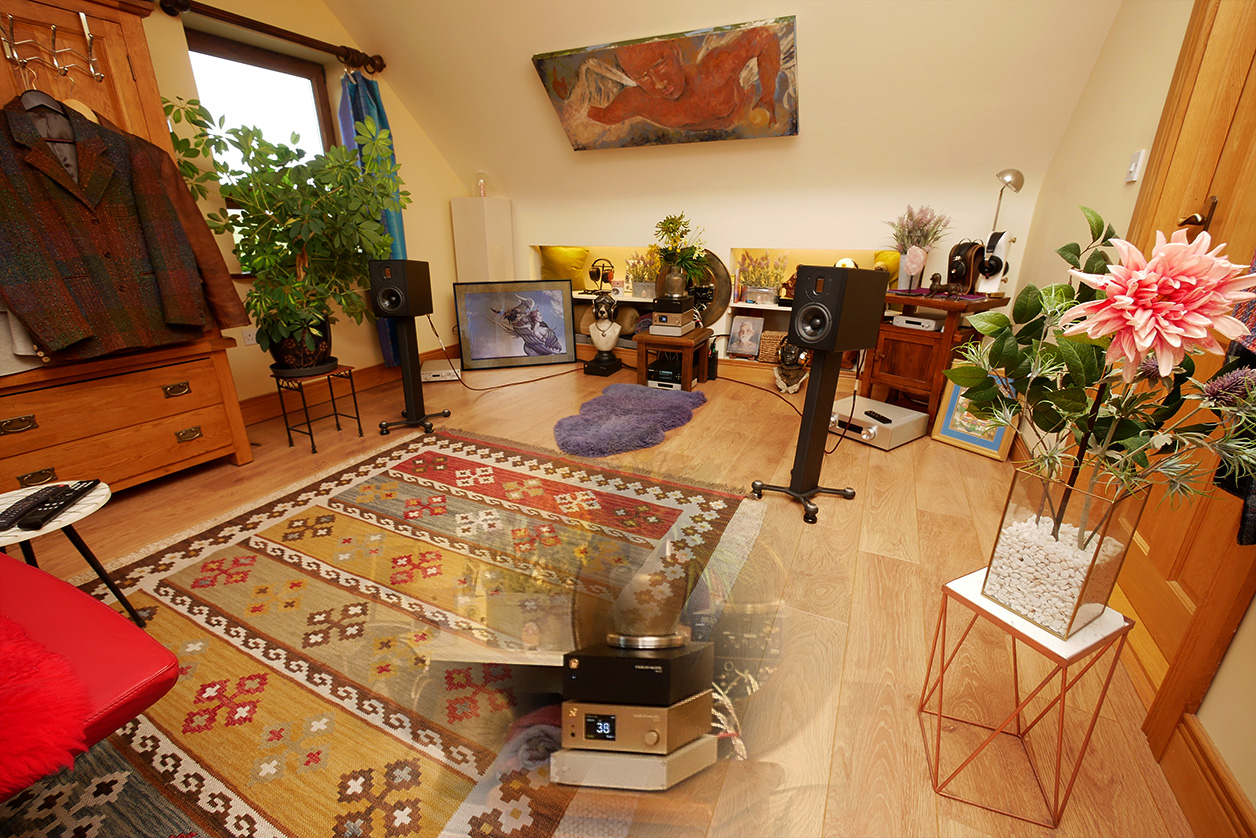 Remembering Gold Note's big PA-1175 MkII amplifier with bipolar outputs I'd reviewed earlier, I now thought that the PA-10 had to be voiced a bit warmer and richer yet seemingly sacrificed little fine detail and venue cues. Playing with its DF feature, I felt that these compact but unusually powerful monitors benefited from lower damping. That generated greater tonal bloom and textural largesse. High damping factor was stiffer and less generous. With the big Zu Submission subwoofer in the left front corner, I had no need of potential bass advantages from lower output Ω so the little blue light in the back of the PA-10 remained on.