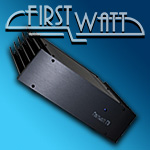 With FirstWatt's latest, you could wonder what's the difference whilst dreaming up Scrabble plays on its F8 nomenclature.

"He effin' eight my soxs!" A mutt might. A pure-bred class A amp not so much. He'd smoke them but should mostly just be a good dog and dry them while you listen. It's called multi basking.

Then there's the whole 'let thine eye be single' thing. With just one power leight where all precursors had two, does it signify the end of a line or the start of new design DNA?

What would be the difference, anyway?

According to the Nelson Pass design notes, it traces back to the J2 bestseller of this amplifier bunch which was originally built on his kitchen table by the the man himself. Now it's built by Pass Labs. It simplifies the J2's differential-paralleled front end down from six transistors to just one. No balanced inputs then. That makes for only three signal-path devices per channel: for voltage gain an NOS Toshiba 2SJ74 P-channel Jfet and, from Nelson's personal stash, again a SemiSouth R100 silicon-carbide power Jfet; and finally as mu-follower current source an International Rectifier FP240 Mosfet.

Unlike the J2, the F8 uses current not voltage feedback but still does 25/15wpc into 8/4Ω so actually is up two into four. With 15 not 20dB of amplification factor, it's five down on that count but doubles HF extension and damping factor. With these transistors always on to never switch, it again consumes the same at idle as it does under full load. So think power consumption of 170 watts at all times. Input sensitivity for full output is just 2.6V to give better than 100uV of unweighted full-bandwidth noise. 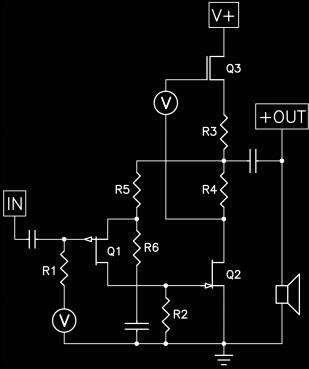 Each output has two parallel 10'000uF/50V Panasonic electrolytics bypassed by 1.5uF polypropylene cap so no direct coupling. Having been created almost six years ago, this circuit has marinated for the right number of moons already. It's fully seasoned. This PDF has the back story on how Nelson cheated by forgetting how to count. It's when 100 isn't 100 but more; like the F8 is—again—exactly six less but also six more than the J2. Magic math.

So, back by popular demand when key parts for continued J2 builds are dwindling to signal the end of a popular classic but simultaneously the rise of a newer younger alternate, the feight is on:

"Gentlemen, place your bets and start your engineers!"

In the spirit of which, this assignment is shared between Warsaw correspondent Dawid Grzyb and yours truly.

As Pass Labs' Desmond Harrington put it, in the wake of an F8 press release making the rounds, "unfortunately it's a lot easier and faster for our PR agency to issue press releases than it is for us to make product. But we'll get you a sample when we can. You're on the list now."

Feight accompli indeed for another uncomplicated class A single-ended stereo amp of low power, low gain and 2nd-order negative-phase THD. It promised to exceed its popular precursor whilst once more (for the last time?) dipping into Nelson's personal cache of now unobtainium SemiSouth SiC parts.

Except for the single power LED*, it looks like all other FirstWatt amps where face plates go from black to silver back to black depending on model. The very same heat sinks set dissipation limits. Together with a smaller power supply inherent in the entire line, it means modest power ratings which won't double into lower impedances. For big power, there's Pass Labs. For simpler circuits suiting more efficient speakers, there's FirstWatt. Here the F8 just became the latest member and, as its designer promises, it has just a little bit of personality.

* As it turns out, the single LED signals that Nelson then Pass burnt through the first 2'000 face plates. When the restock order for that part came due, one hole fell through the cracks so the next batch of FirstWatt amps will be single-eyed. If you need glasses to see it, save money and get a monocle. As to LED color, if its emitting wavelength is 430-480nm, we call it blue. At 500nm it becomes turquoise, at 520nm cyan. To my eyes, FirstWatt have always been somewhere in blue's upper range just before it turns turquoise.