2-in-1. With all focus on headfi, it's easy to miss Oor's preamplitude. Everything dandy for headphones—extremely low noise and high current from a beefy low-impedance output stage—is ace also for a speaker amp's input stage. Being limited to two inputs is painless when the vast majority of users runs digital sources. Those require a DAC that will have USB through Toslink plus everything between. Check. The only thing Oor as preamp hasn't got is remote control. Mashed couch potatoes are out. Here Oor is all steak no sizzle. But 'round back it does call itself a headphone amplifier. Now a remote control is oornery. Agatha Christie to the rescue again, here with aged heroine Miss Marple: "It's what's in yourself that makes you happy or unhappy." Quite. It's probably true that far fewer buyers will shop Oor as just preamp. But it seems as likely that those who buy one for headfi will make it their preamp once speakers enter the picture. So it's lovely that Oor includes that expansion. It'll never be an oornate preamp with remote, display and massive socketry. But if it was as good at headfi as Hypsos was in its bolt-on power upgrade field, I expected excellent sonics when fronting speaker amps. I'd try our Job 225 and Bakoon AMP-13R to be sure. 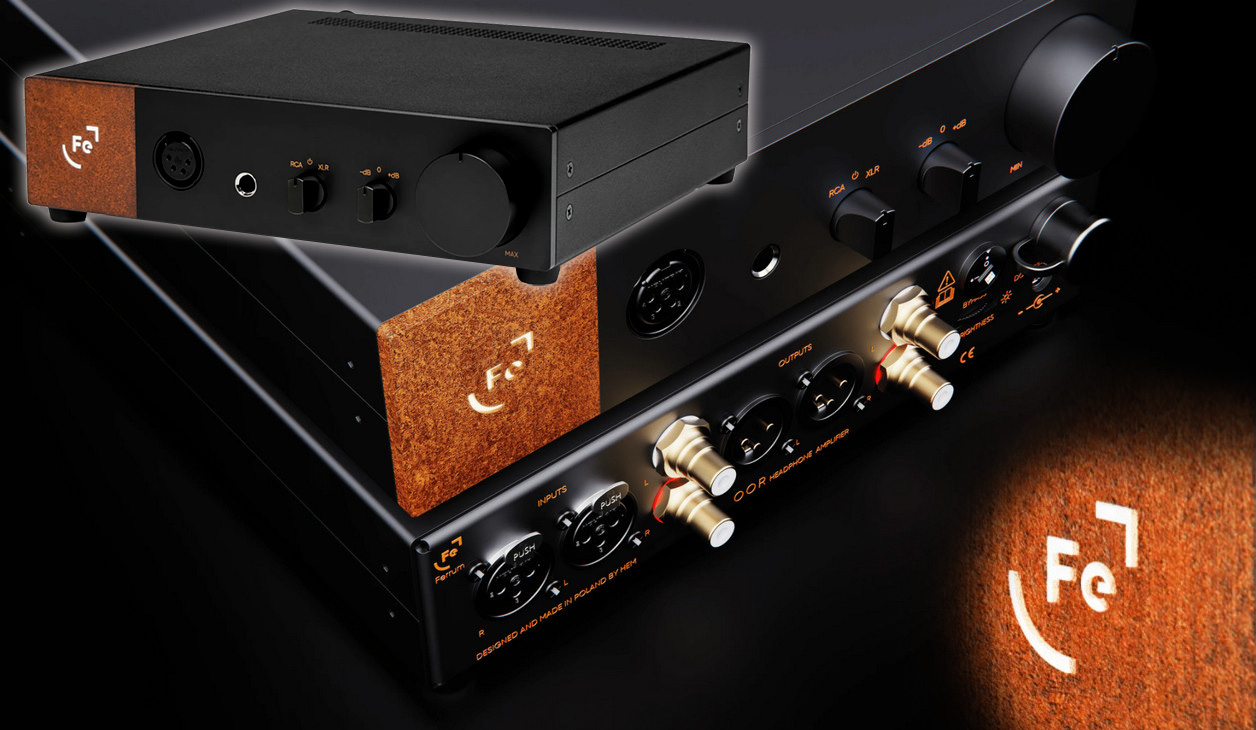 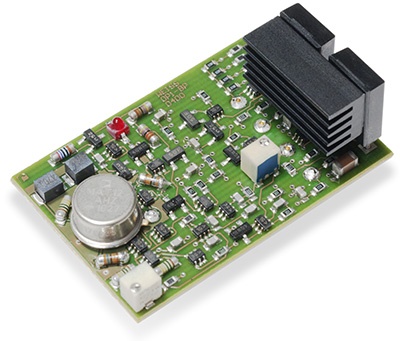 Max: "It is fair to call it a discrete opamp. It's even a discrete power opamp. Current feedback is common because such architectures deliver high slew rates and gain can be set independently from the bandwidth to some extent. However Oor also executes techniques which aren't used in IC opamps like two-pole compensation which gives open-loop bandwidth and therefore keeps distortion low even at higher frequencies.

"Most IC audio opamps have enormous open-loop gain but across narrow bandwidth of 100Hz or less. We have 60kHz of open-loop bandwidth far beyond the 'typical' audio spectrum. And no, this is not class AA like the Matsushita Bridge. We don't have a class A voltage control amp and bridged current-injection class B. Oor's special circuit controls each power transistor by monitoring its current independently and never lets the transistor's current drop below our preset threshold value. That way our transistors don't pass through their most nonlinear region which lowers distortion. Gain sets in the preamp stage and lower gain sees a voltage divider. High gain runs less feedback in the gain stage before the output buffer."

For herd immunity from nerd mutiny, we probably best think of Oor's output stage as high-bias class AB. For prior art in hi-spec audio-specific and fully discrete opamps, at right is the Daniel Weiss OP1-BP from Switzerland. It's very different from on-chip power amps like those used by Gainclones, older 47Lab and Jeff Rowland amps and today again by Moonriver and Clones. Bakoon are famous for their discrete Satri opamp at the heart of the AMP-13R since transitioned to the Enleum AMP-23R. Acoustic Imagery, Burson & Bros. offer socketed discrete IC drivers to support transistor rollers. Ferrum embed their discrete power opamp on the main 6-layer PCB of which two layers handle just grounding. We'll look at that next. With the PSU separate, we won't see any primary power supply, just analog gain processing, filtering and dual-mono ±20V rails for the output stage, dual-mono ±15V rails for the preceding gain stage and another rail for the frontal LED with plenty of low-dropout regulators.

To remind ourselves of Hypsos—Hybrid Power Supply System—here are two inside shots, the second with a mouse-hover enlargement function. 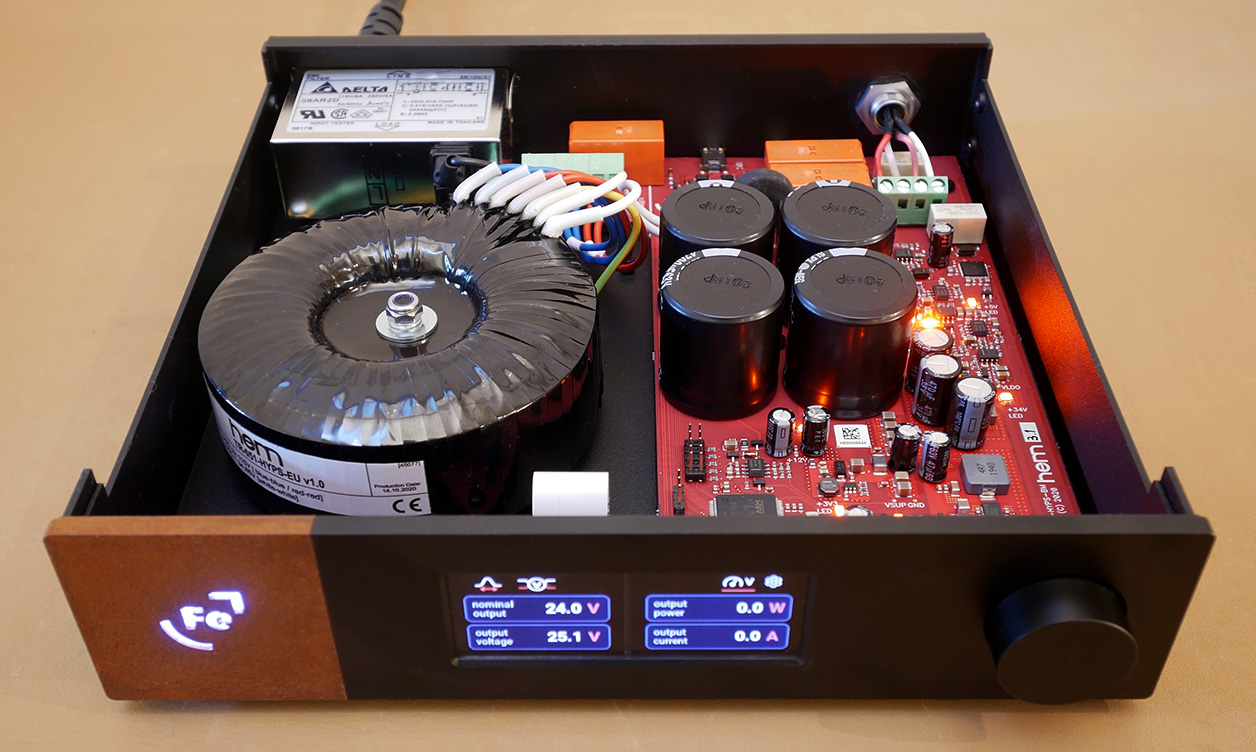 The displayed nominal 24V is the correct setting also for Oor. The 25.1V value is the sweet-spot tuning I'd set for the Fram Midi 150 active speakers during my Hypsos review. Output power and current show zero because I had no load on the unit while photographing it. Logo brightness was at max so can be made a lot dimmer. 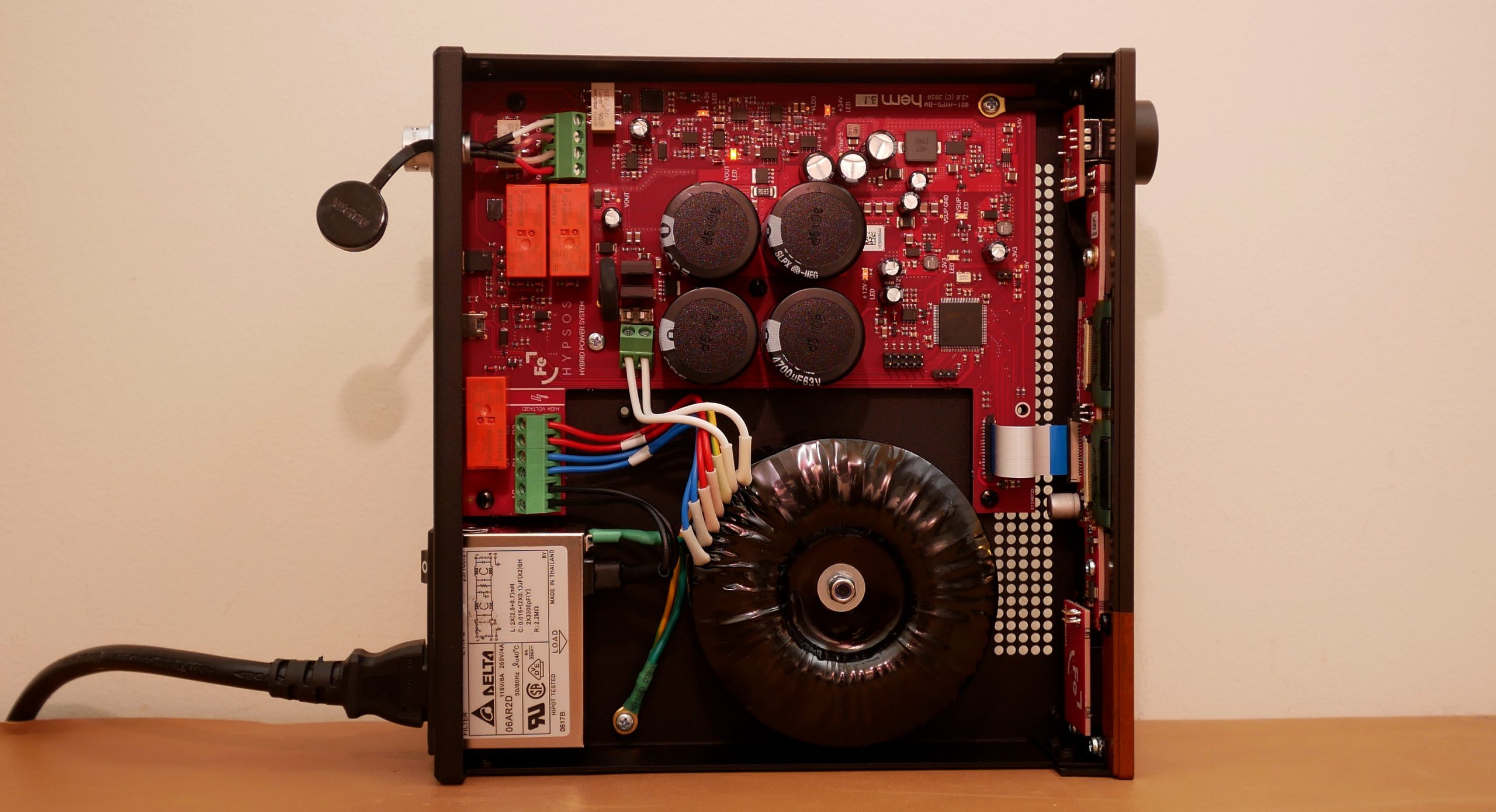