That wasn't the end yet of my line. Things could/would get higher still. Enter our Soundaware D300Ref. It's the ultra-cap'd big brother to our D100Pro with a better power supply, superior clocks and I²S over HDMI. 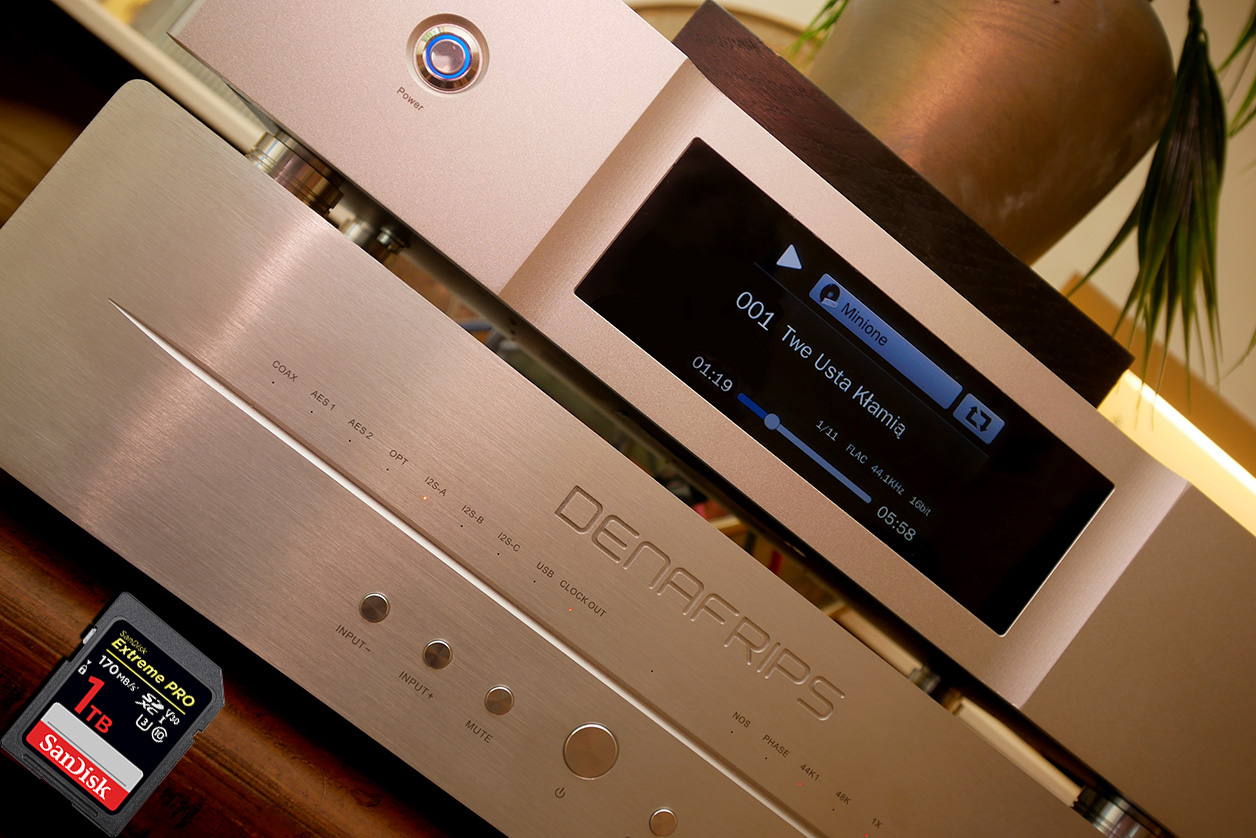 For one more rung up the Jacob's ladder, its I²S facility over our standard Terminator has long since been my default preference. To configure HDMI pins for the Plus/Ref handshake, I had to select the DAC's I²S-A input, then hit 'mute' to enter configuration mode as shown with the running input lights. With the 'phase' button, the 1X/2X/4X sample-rate indicators are then fixed to a pattern of 000-111. I needed 101 so 1X on, 2X off, 4X on. When displayed correctly, one waits whilst the new pin assignment is written to FPGA. Once the lights returned to normal, I hit 'play'. Voilà, distortion gone from mismatched pins, Lucy in the sky with sparkling diamonds. Toggling through coax (75Ω Tombo Trøn), AES/EBU (110Ω Allnic Audio) and I²S (AudioQuest Coffee with active dielectric), the latter won as I knew it would from earlier experiments.

In sequence and for a clean nose, the first with/without clock-link difference trumped the subsequent upgrade of SD card transport. If the choice was between D100Pro with clock link versus D300Ref without, the Pro would win, hands down. Gilding the lily with the I²S connection on the Ref made a smaller difference that upgrading clock-linked transports. I hear the I²S advantage as a small uptick in contrast ratio. Incidentally, that also holds for comparing the SD card read to streaming the same .aiff file off our music iMac through Audirvana 3.5 via double-header USB cable into the D300Ref. Even though Audirvana caches long playlists to our 32GB RAM to spin down the FusionDrive, eliminating the computer entirely sounds even better. In our house then, the very best digital file-based playback comes from our best SD card transport with clock inputs slaved to the Terminator-Plus whilst using the I²S connection for signal. Would Gaia eclipse the Ref even without SD card reader? How about Avatar for CD? Let's move the show downstairs where the primary upgrade over upstairs is a flagship preamp and bigger speakers for greater LF bandwidth.

Here a parallel review—of Pál Nagy's icOn 4Pro autoformer passive preamp from the UK—had already been an upset. With T+ gains of midband density, bass authority plus pronounced resolution upticks from clocking the Soundaware now used as USB bridge, the deliberately homeopathic dosage of our Elrog ER50 direct-heated triodes in Vinnie Rossi's direct-coupled grounded-grid circuit no longer mattered. The remote-switched AVC with 68 volume steps recreated the same heightened soundstage holography of upstairs. It simply scaled up for a larger space. Whilst playing it rhythmically a tad tauter than the slightly more relaxed valves, the passive caused zero leanness or textural sparseness. In fact, its handling of bass detail created more punctilious enunciation. It cut some port-induced fat on the hidden 10" woofers of our Audio Physic Codex which the tubes supported more. 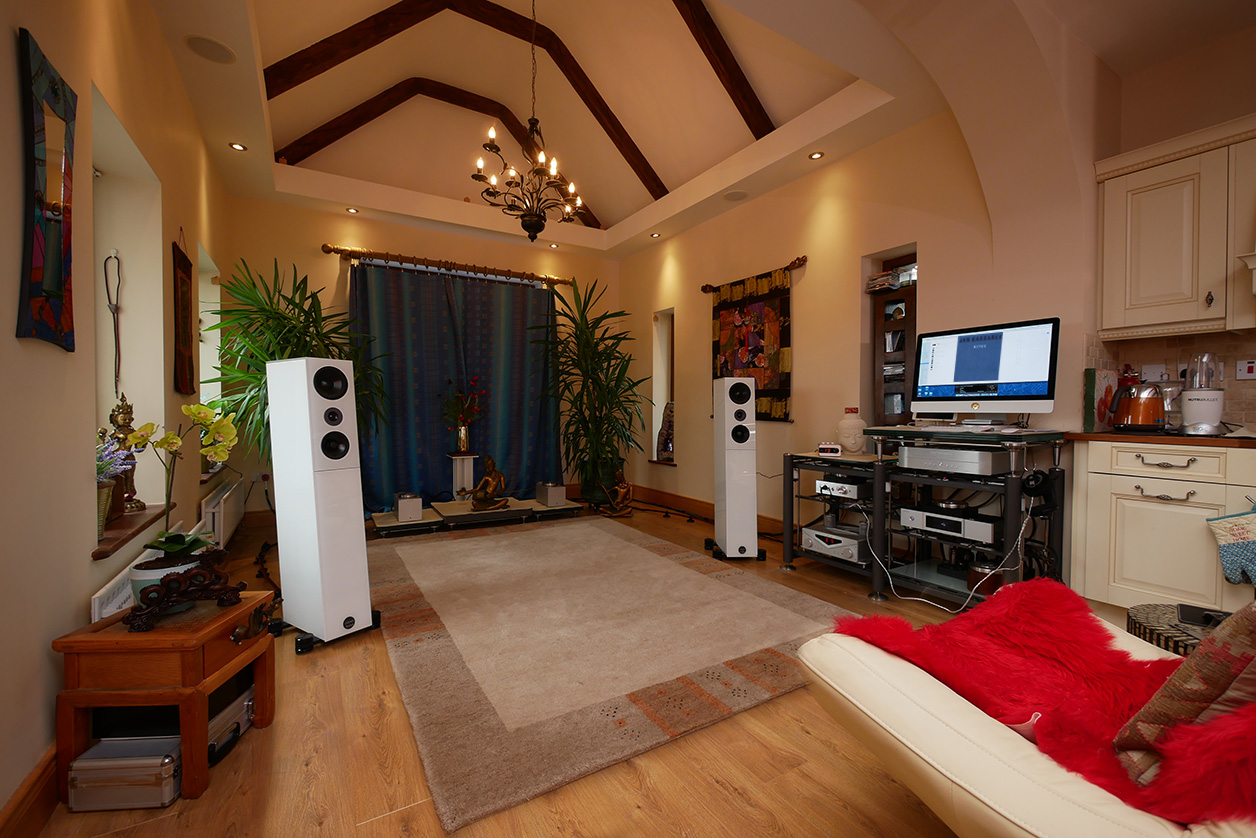 For many listeners, the primary task of voicing a system revolves around their ideal balance of transient acuity, image density and tone. Experience teaches that these aspects interconnect. Improving one tugs on the others to potentially pull them out of shape. Increases in speed nearly invariably lighten weight. Greater tonal fullness steals from transparency and so forth. From digital to their smaller preamp, power amp and flagship headphone amp, the Denafrips house sound to me has always been more organic than obsessed over ultimate detail. As Vinshine Audio's sister brand, Kinki Studio pursue more speed, incisiveness and energy for an alternate flavor. For one reader, the Terminator's DSP board upgrade already was a step in the wrong direction. He heard the detail gains I described in my review of it, just didn't rate them given that he perceived parallel losses in warmth and musicality he valued more. Being a plug'n'play affair, he of course could revert to the original DSP module in minutes.