On discrete R2R conversion: "In effect any converter IC designed by a semiconductor firm is a black box. Its ultimate performance is already written to its hardware. In most cases semiconductor engineers are not specialized audio engineers who understand music playback intimately. They won't perfectly solve certain sonic problems while designing their chips. Once professional audio designers work with them, they cannot overwrite their built-in parameters. Many of their own design ideas cannot be exploited fully. They must always design around the limitations of their chosen silicon. This is precisely why we opted to revisit the most fundamental and early approach of the discrete resistor array. With it, we enjoy perfect freedom to design our very best solutions outside the usual constraints and boundaries which are imposed by the integrated converter chips." 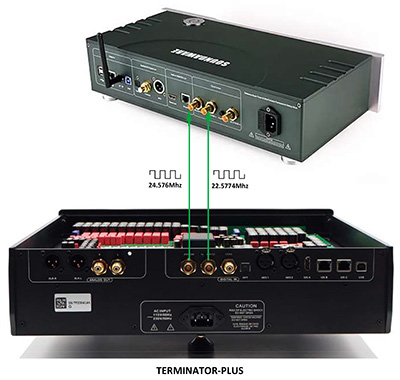 That external clock syncing isn't limited to all-Denafrips stacks is shown here with our super-cap powered Soundaware D300Ref. We use that to reclock our music iMac's USB stream and isolate it from the DAC.

I never had a DAC with clock outputs to exploit the clock inputs of the D300Ref. With the Plus and after acquiring the necessary BNC leashes, I could experiment and chase mo betta.

Does hifi learning ever stop?

Only when we grow cynical enough to think we already know it all.

Owners of the standard Terminator will wonder. Terminator + Gaia = Terminator-Plus? Gaia occupies about the price difference. Could that elevate an original Terminator to Plus status?

We might think so if we presume that the primary Plus advantage is the 'super' clock. Now two lesser clocks in series might just accomplish the same. But wouldn't that overlook that the entire circuit board of Plus is different? That suggests rather more changes than 'just' an upgraded clock which could otherwise have plugged into the old board.

I've always wondered/hoped. Can DACs reach a level of excellence where external reclocking no longer matters; where their own clocking can no longer be improved? Or would Gaia still do something for the buffer Terminator?

Here armchair warriors argue endlessly when all it takes is some real arm wrestling – listening.

This graphic shows how DSP and R2R boards are two physically separate entities. Each draws its own power through the central chassis divider from the enormous power supply below. Only the clock assembly connects these two halves. Divide and conquer: Sly on the left, Arnie on the right, Nitflex in the middle? Re: clock sync and cables for it, I asked Chris Sommovigo of Black Cat Cables. "Square waves of clock signals are assemblies of fundamentals with superimposed odd harmonics up to the 11th. A 24MHz fundamental for example could have components up to 264MHz. If matching the impedance was important for S/PDIF already, it'd seem more so for clocks because that's where things can fall apart. Here it depends on the DAC's load impedance. Some are 50Ω, some 75Ω. In my present lineup I'd use a Trøn Mk.III for 75Ω, a Trøn KLØK for 50Ω." 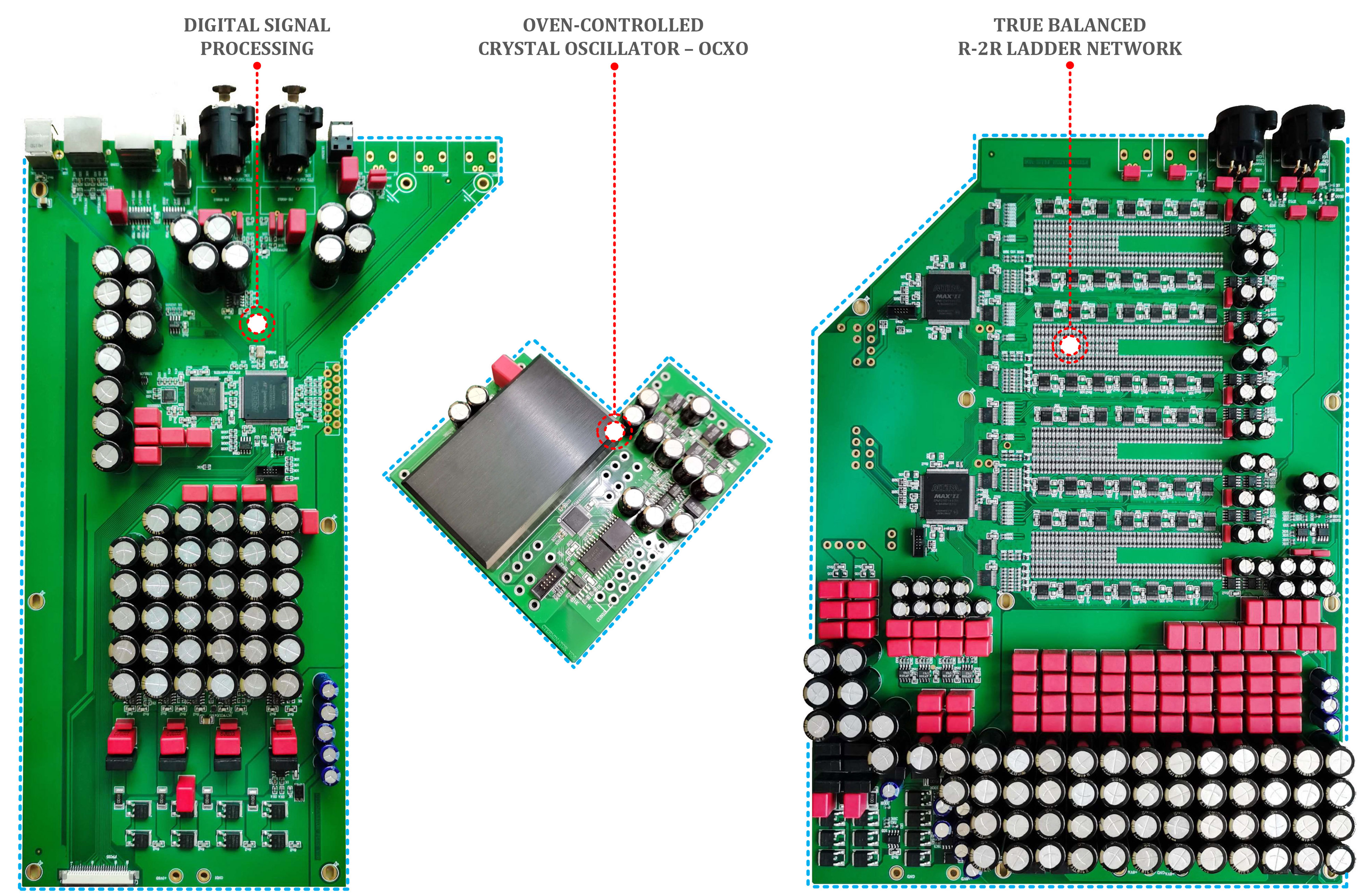