Another Shanghai vs. Beijing match was footed by the Questyle CMA-800R monos. This got the game back on fully balanced feet. These 'current-mode' twins, incidentally of identical width as Artemis if far shallower, duly set up camp beyond the Kinki. That's because they played it still more incisive, lit up, damped and slightly cool or bluish though also the most sorted and crystallized. On an elegiac Jazz trio number with Jacques Loussier riffing on the evergreen Eric Satie's Gymnopedie N°5 not Chanel, the Questyle tuning rendered his piano the most percussive or staccato, with Artemis the most legato, THR-1 in the midst. As such the twinned chassis shone the most light on typical soundstaging aspects and what's generally referred to as transparency. Simultaneously they went lightest on tone density, weight and related facets of perceived shove or grunt. Think pentode with high feedback, again to overdraw for emphasis. 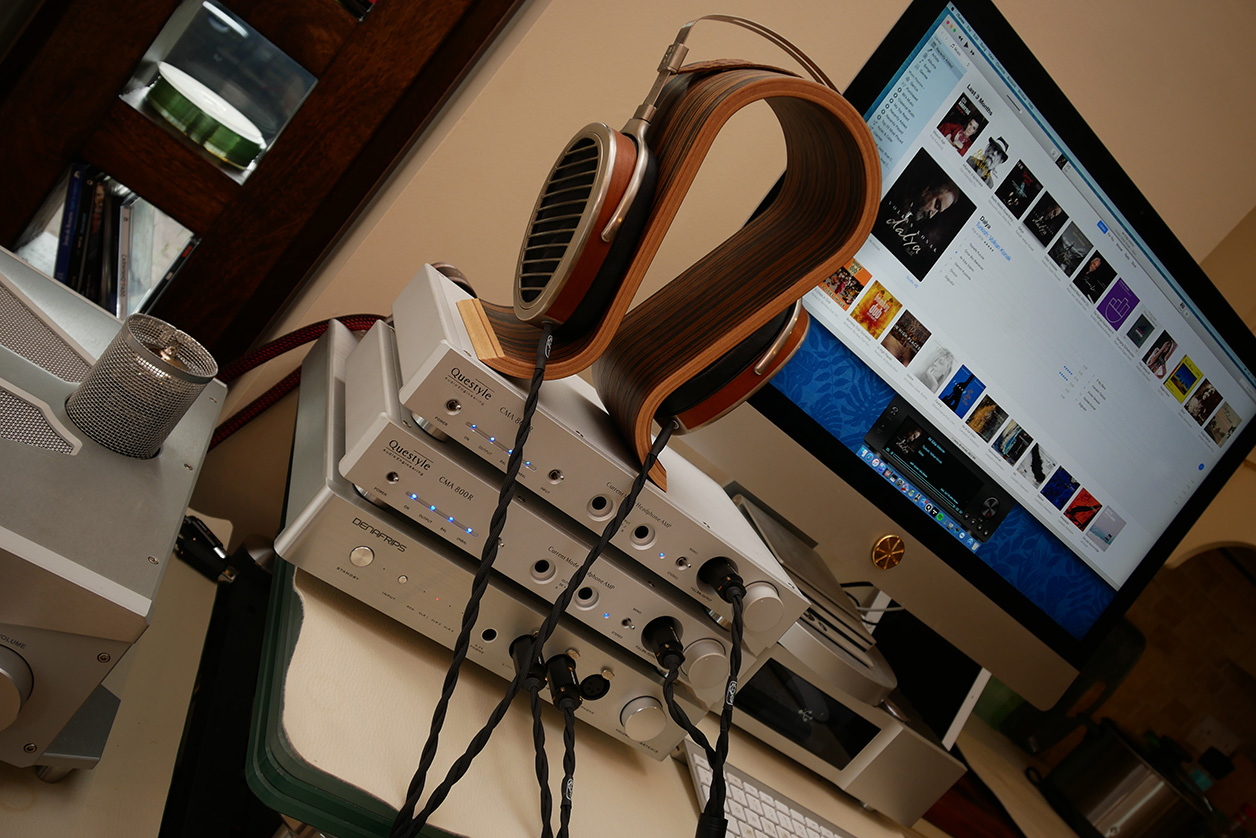 To my ears, our bright Sennheiser HD-800 with the aging black foam crumbling and Final's Sonorous VI fare best on Artemis. Our original elephantine yet also chocolaty Audeze LCD-2 style most with Quest. On voltage gain, the three brands propose roughly equivalent drive when referenced against Susvara and how much or little headroom I had left. On sonic pedigree, I call this a club of equals. A buyer deciding between these three models would pick sideways on flavor preference, features, cosmetics and perceived brand cachet.

And yes, the attentive reader must have noticed that Chinese brand origins factored big in today's review. As John Darko of darko.audio reports from show attendances in Japan, headfi is huge in Asia. If we momentarily shrink all of hifi-producing Asia down to just China to leave out Japan, South Korea, Taiwan, Malaysia and Singapore, today's brands are part of their current best. It's why our reference D/A converter is a Terminator. Where Artemis does you one extra is with her Ares II stablemate. It's a smaller still discrete R2R DAC of shared width to make for a complete headfi system. For cosmetic and sonic unity, that'd be a very tidy package. Ill-wishing bystanders might be annoyed to finish yet another happy Denafrips review. With what they've sent me thus far, they've simply never stepped wrong yet. True, I did find it just a bit odd that Artemis as a flagship design doesn't pack just a bit more raw gain for a bigger margin on Susvara and their ilk when recorded dynamic range is high to move a track's majority content 15-20dB below digital zero. On the flip side, it must have been a conscious decision to maximize the circuit's S/N ratio for high-sensitivity designs like the 100dB Final Sonorous X. Not only didn't those sniff out any noise where the Kinki isn't as six feet under, they had more than just a few attenuator clicks to leisurely come on song and not get too loud too fast.

Wrapped. Artemis contains the word 'art'. Perhaps hifi gear could be designed purely by measurements, on the scope? Some likely is. Audio Science Review should fancy that. But Mr. Zhao at Denafrips must also listen a lot. That's if we hypothesize that textbook gear should sound like distilled water – ultra pure but without any taste. Artemis isn't that. Music over this headphone amp sounds ballsy, fulsome, rich, earthy, relaxed, warm and texturally just a bit soft. It makes for an artist's impression of reality. As such, it can be better than recorded reality and routinely is. So call it an alternate reality. Either way, the voicing elevates comfort, pleasure and dynamic surety over ultimate resolution, air, separation and all those pseudo-visual hifi attributes which speak more to the observer's mind than the participant's emotions. Neither aim is wrong. Playback is hedonistic. You pick your poison. With Artemis, simply expect a more femmy sound. Already the name suggests as much. Add sporty abilities with high muscle tone—bow and arrow gave that away—but not today's androgynous physique. Now your expectations on how all that should translate to music and sound will have you perfectly on track. Who knows, for you the straight arrow of Artemis might just turn out to be Cupid's. Then you'll be very pleased indeed that she doesn't stem from countries with higher wages and steeper workers' taxes…