Stable of course. You'd not expect a superior amp to change stripes with load. Be it Final's Sonorous X dynamic heavyweights as our superior Sennheiser HD-800 stand-in, the stablemate D8000 thin-film version or the Audexe LCD-X for closed-backed alternates, Artemis always presented substantial weight, rich tone density and a bottom-up 'from blackness we come' perspective. That meant a warm earthy milieu like moist coffee-colored potting soil. With excellent control of low frequencies from apparently stout current, the D8000/LCD-X tendencies for minor excess were well reined in. With the next breath it's fair to say that if you wanted those types on an accelerator not meat-packing type amplifier, you'd go with something like a leaner/quicker Questyle CMA-800R. 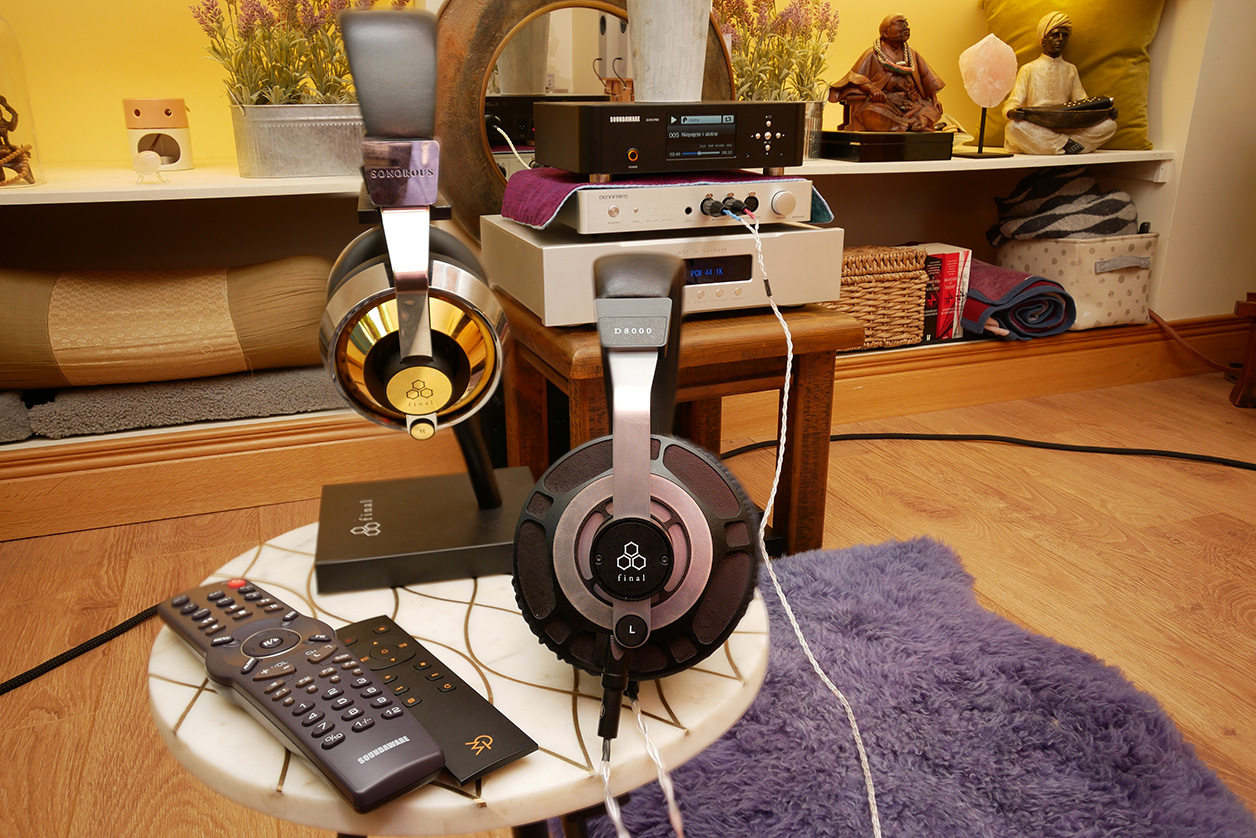 Phrased from the other direction, bright nervy lit-up headphones with a tendency for whitishness and top-down etherealness—plus music of the same slant and religion—would find themselves properly grounded. Here it's relevant to remember basics. Due to sheer proximity of transducer to ear; due to elimination of xover-induced phase shift and multi-driver comb filtering; due to absence of room interference, signal reflections/delays and loss over distance – headfi out-details and out-linearizes the vast majority of speakerfi by a significant margin. In extremes like our Raal Requisite SR1a nude floating dipole ribbons, this means assaultive detail density such as is never heard with live music. Accordingly, it becomes taxing to process that much raw data. Our biological processor runs hot. An alert listener will find that after 20-30 minutes of such full-contact immersion, attention overloads. Now one needs a break; or continues at reduced capacity aka attention deficit.

Artemis isn't about such extremes. Her more fulsome 'comfort over ultimate speed' voicing compensates for headfi's proximity and room-isolation gain of small detail. And that counters listening fatigue. Once again, fatigue needn't be about primitive brightness and etchy forwardness. It is also caused by an unnatural overabundance of direct-sound data. Imagine a Physics professor who talks too fast and technical. He quickly zones out his audience. Recording/mastering engineers inspect music down to the bone to make strategic final adjustments. That's what they get paid for. Home playback is pure hedonism. It's not about getting paid. It's not about reverse-engineering a sound engineer's decisions. So it's not the audiophile with the most detail who wins. It's the music lover who enjoys her hifi for the longest sessions. There's nothing wrong with quickies but Artemis simply rewards far greater stamina.

Define by contrast. For a bit of friendly domestic competition likewise from China, I had Kinki Studio's THR-1. It's a single-ended affair with XLR4 just for convenience. Because our Terminator DAC dislikes having its XLR and RCA outputs simultaneously live—now it distorts—I went for RCA and a quick reseating of Allnic interconnects at both amps. It also meant a ¼" leash for the HifiMan HE-1000 to stay single-ended. The remainder of the signal path was our music iMac with locally hosted so owned not rented files; Audirvana 3 with 32GB of RAM to buffer music and spin down the FusionDrive; and a Soundaware D300Ref to reclock, de-jitter and noise-strip the USB data, then pass them on I²S over HDMI to the converter which was set to integer oversampling with the latest DSP board. 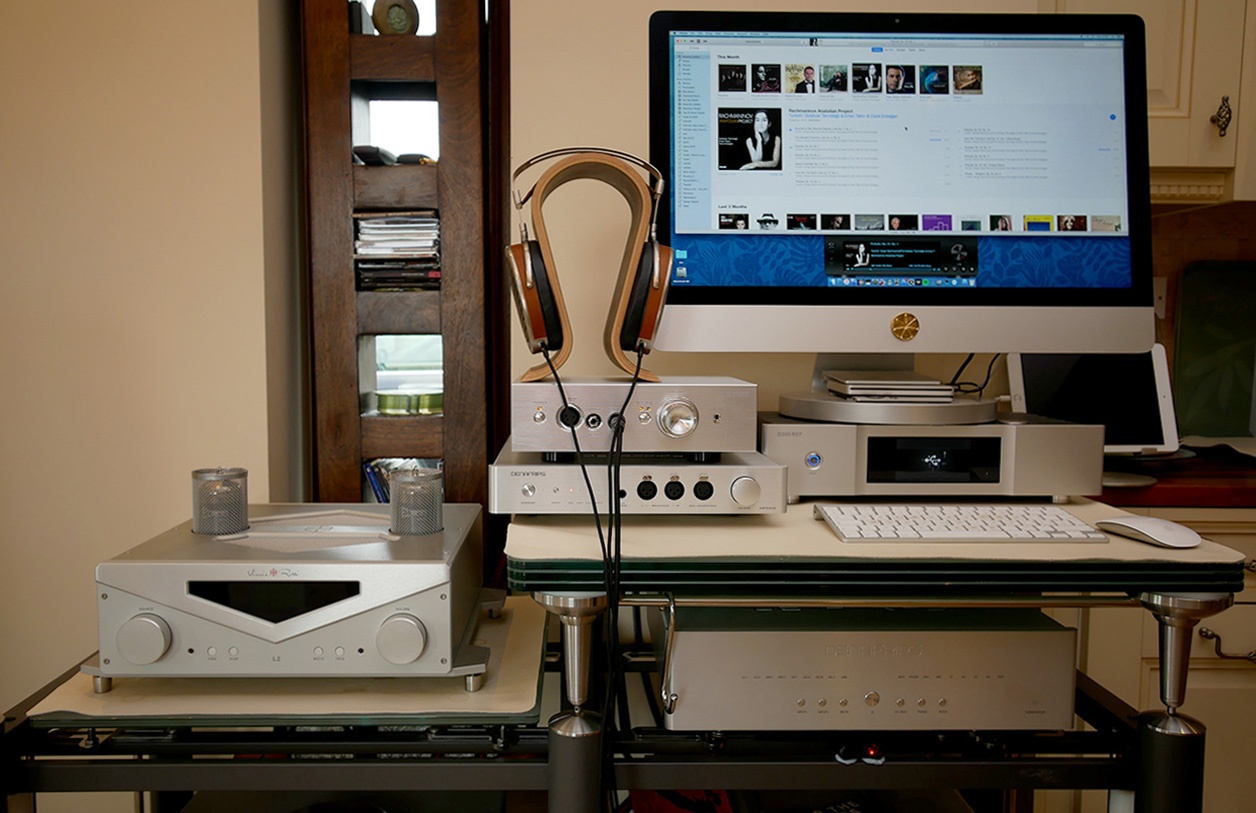 With the potential Artemis advantage of a true balanced signal path nixed—her input data had to first be symmetrized, then de-symmetrized again to exit—the key offset between these particular amps was textural. The Kinki played it crisper on transients and outlines, tonally a touch lighter and with a bit more top-end energy. Subjectively, most would call it a tad more resolved, articulated and separated. The Denafrips was softer on the attacks, not quite as keen on edge limning and tonally heavier as though its center of gravity had moved down half an octave below middle C. The elements of air and sparkle were less evident and traded for greater macro-dynamic swing. Back on textures, you'd call the Kinki drier, the Denafrips wetter. In terms of perceived musical tempo, one might find the Kinki subliminally quicker, the Denafrips a skoch more relaxed and leisurely. Judged on the density axis, Artemis had a bit more. Quite by definition, this meant that on sorting transparency i.e. layer separation and image lock, the THR-1 was ahead. To overdraw for the curtain call, one might call Artemis more triode, THR-1 more pentode. With that clarified, we move the stakes closer together again. In the end, all of these were modest differences whose descriptions merely add to you making your very own Artemis-lives-here 'X' on the map.