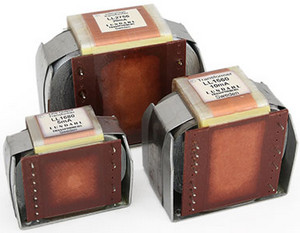 "Of course I myself wind only the golden sample, then order production windings from our small domestic specialist who, unlike most, doesn't vanish when asked for just small quantities and who appreciates that unlike many, I don't abuse him with one-up prototypes for DIY. In my workshop, I handle all the subsequent assembly, mounting and potting.

"For the interstage and input transformers however, I must go to Per Lundahl. With the Italian suppliers I know, it would be impossible to source his special cores. The problem there is always the minimum order quantities for the required raw materials. With those parts, I design them, then outsource manufacture to Denmark.

"As to influence of factors and their gravity, there is no fixed rule but I could summarize as follows. For line-level or power signal, 30% of the sonics come from a transformer's geometry, 10% from its winding materials, 30% from its core materials and 30% from its overall construction. For very low-level signals like in our industry phono, 25% is geometry, 25% winding material, 25% core material and 25% construction. In short, it depends on the signal strength you deal with and the bandwidth you need. 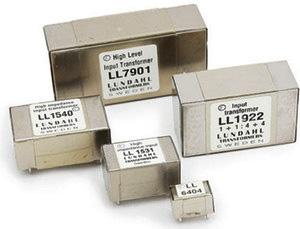 "For input transformers, choices of core materials are AlNiCo—an alloy of aluminium, nickel and cobalt—amorphous, nanocrystalline and mumetal or permalloy as two forms of an about 80:20 nickel/iron alloy. For interstage transformers and very low-level signals, it's the last four whilst the same type transformer for line-level signal deals in amorphous, mumetal/permalloy and/or grain-oriented silicon steel.

"Output transformers use grain-oriented silicon steel or silicon steel that's interleaved with a small percentage of mumetal/permalloy. Whilst not very well known, nanocrystalline and/or amorphous materials are actually widely used today in toroidal transformers where efficiency and size are important. So they could be inside your LED desk lamp looking at you each day without you realizing its exotic contents. 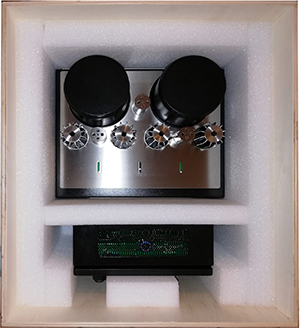 For those worried about Venice's annual flooding and potential damage to lagoon-based enterprises, "I live and work not downtown but 30km from the island in the country side as our 'metropolitan' area of Venice. For Venice island, it's usual for St. Marco as the lower part of downtown to be under water each year. The important thing is to remain below 160cm above sea level. Otherwise ~70% of the city floods including St. Marco Basilica. More than 180cm and everything floods."

Being situated on Italy's mainland, CanEver Audio sit outside the city's flood zone so their business remains unaffected.

When Mario was ready to ship, he sent this photo to preview his pallet supporting a 50x50x40cm crate with 28.6kg worth of amplifier and 7.4kg of power supply. Forcing freight firms to use pallet jacks or trolleys secures safer handling especially when shipments get heavier. Whilst awaiting delivery, I thought of alternate options which a buyer might consider who was keen on a front-to-back transformer-coupled class A amplifier with tube input stage and transistor outputs. The closest I came were the Heros monos from Bulgaria's Thrax. There might be others but the list should be very short.

On delivery day, Mario checked in again since the owner's manual wasn't yet back from the printer.

"To power up there are two switches. The main switch is at the back of the PSU. When that's in standby, its first LED will be 'on'. Now you can power up the amp with its own switch. This will light up the second LED on the PSU which also has a small toggle in the back to drain common mode noise on the mains. Its default position is 'down'. Should your dwelling's circuit breaker react, move it up. Residual current devices are usually set for a max 30mA difference between neutral and live wires. Moving the micro switch up disconnects the drain of the common mode noise."

Here we see the back of Olimpico and its PSU, with the plexi tube covers removed and the red umbilical partially at the bottom 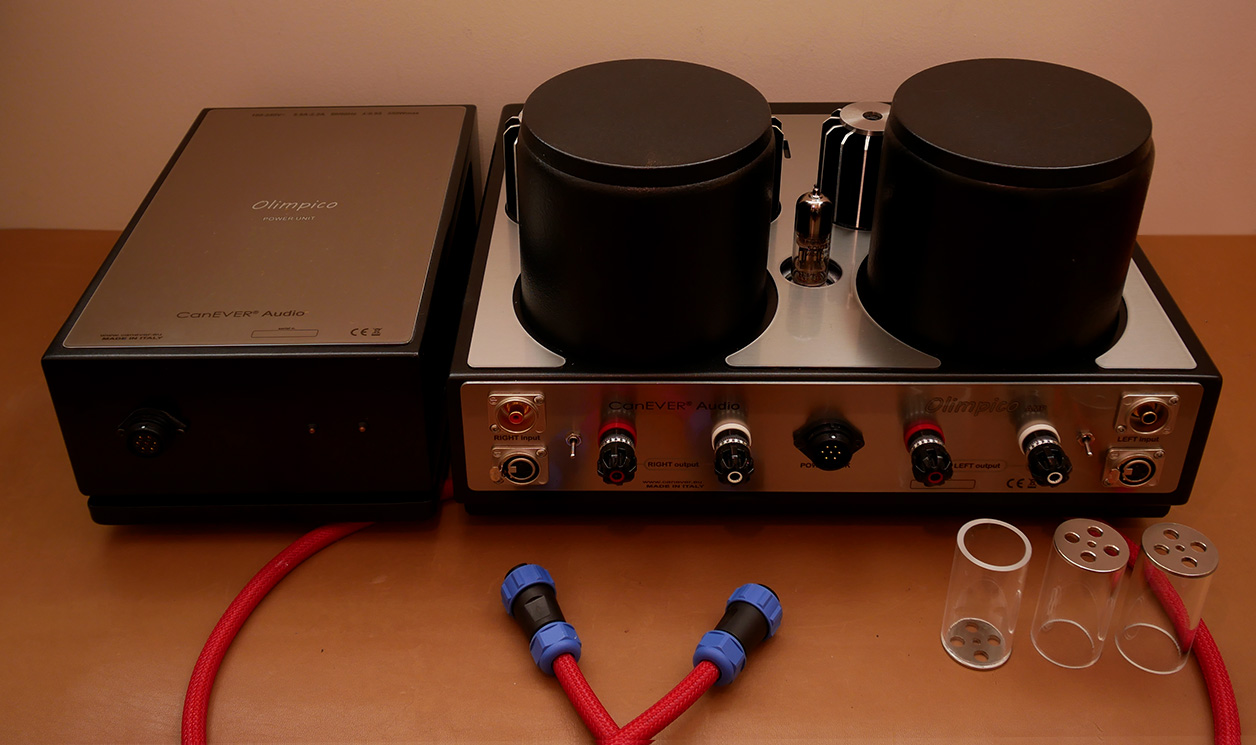 Toggles on main unit select between RCA and XLR inputs.