The full-size casing's metallic lacquer looked far more suave in person than in the stock photos or, as it turns out, mine. Think finely flecked car paint. With the belly-mounted back-lit power switch 'on' and power-up finalized, menu navigation was easy. I quickly fixed settings to extinguish the display after 10 seconds and reawaken it for changed values in temporary big font. That mega mode shows nicely across preamp-type distances or using 3m headphone cables. The first source was a Soundaware A280 as SD card transport outputting S/PDIF. The first cans on the job were HifiMan's inefficient Susvara. At -19dB attenuation, those were in full flight with headroom to spare. I had proof of life and A+ Susvara fitness. As one of the toughest loads to market, it's my personal guarantor to fill a 'should drive anything' prescription: CansForEver. Rx. 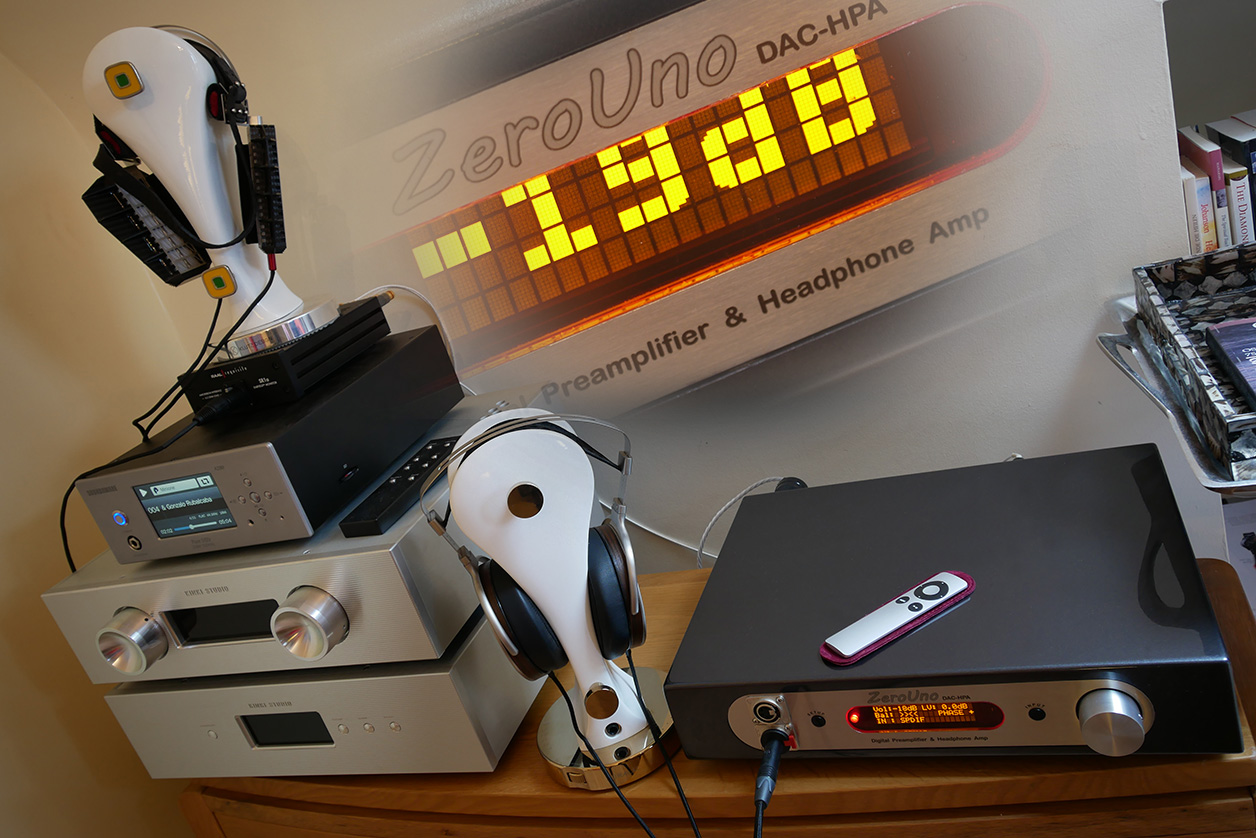 The pre-paired Apple remote arrived in a lilac velvet pouch, the HPA with mounted swivel footers.

A few words about booting up. As initialization begins, 'battery mode for USB' lights up, LEDs accumulate left to right until the line is complete and the word 'ready' appears. Now my power LED shifted from blue for MQA Studio to green for MQA to red for PCM/DSD where it remained, a quick screen view showed the memorized settings, in my case the two defaults of 'jitter reduction' and 'oversampling' on, 'MQA format available', then my changed 'display off in 10 sec', then the incoming sample rate '44.1kHz' in big letters, finally the four-line main readout which slowly faded out after my preset time. Forgetful professors and multi-user households alike will always see a full breakdown of what the machine was last set to whenever they fire it up. That's smart and reassuring. It's testament to Mario's engineering chops just like the stout grounding post on the back. One can tell that someone really thought about how his machine would be used, then how best to make the interface both intuitive and comprehensive.

Before we enter sonics, three more items. Where in his circuit did Mario insert the Lundahl transformers? If behind the Sabre32's outputs, they'd act as output transformers for the direct outputs but as interstage transformers for the amplified outputs. "Correct but that's not all. I also implement a 1st-order filter to interact with the internal digital filter of the Sabre chip so the 'cleaning' process at the output of a Sigma Delta process is more 'natural'." How did he apply his gain trim? As he doesn't use negative feedback but the trim affects direct and amplified outputs alike, I thought of either digital math inside his firmware, a voltage divider at the Sabre32's outputs or variable reference voltage on the chip. "The output stage after the Sabre chip is just my 2.5Wrms/30Ω class A amplifier coupled by Lundahl transformers. For gain trim I use the same 32-bit volume control inside the Sabre chip. All analog setups are fixed so the output stage operates at an optimal bias point." Lastly, because headfi and active pre-outs see the same quad-transistor output stage, what was the output impedance on the line versus headphone outputs, respectively? "The output impedance is the same sub 0.1Ω so it doesn't matter whether you connect a 100KΩ load like a pre or power amplifier or a 30Ω headphone. From 30Ω to a dozen kΩ, we don't lose power because the output impedance is this low. Of course one must still pay attention to the output voltage since it can swing up to ±17V when set to +24dB with zero attenuation." The display convention for gain trim called 'LV' is from 0.0dB to -10dB in 0.5dB steps. Here some users could prefer to see positive gain rather than attenuation values.

Whether on Susvara or a pair of Living Voice OBX-RW3 speakers with Crayon's CFA-1.2 integrated handling current drive and volume control whilst the HPA's active outputs were set to 2Vrms = LV -10dB, sonics were inside out, not outside in. That warrants an explanation. Gear that's dialed for maximum separation approaches listening from the outside in like a microscope or surgeon's scalpel. One goes from the bigger to the smaller, from the periphery to the center. The CanEver's focus on big warm dry not humid tone, powerful bass and a very robust rhythmically assured and propulsive attitude flipped this perspective inside out. Be it bravura Baroque with some Hungarian gipsy stylings from ace violinist Nemanja Radulovic or…

… or the same genre with roaring Big Band and electrified strings compliments of Romane and the Frédéric Manoukian Orchestra….

… this gestalt didn't waver. Perhaps due to transformer coupling and signal path simplicity, the ZeroUno had that familiar big meaty quality of certain high-power push-pull valve amps, just zero potential pentode bite. This made tonal mass, color intensity and rhythmic traction the fulcrum from which everything expanded outwards. That meant away from down-to-the-bone separation, airiness and other elements often equated with 'hi rez' where the qualities Mario's aesthetic celebrates tend to get leaner, paler and thinner. Undeniable proof of this richer pudding was the virtual transformation of the thin-film planar Susvara which behaved like rollicking high-pressure slightly fat dynamic cans of Final Sonorous X caliber.