Originally Mario had suggested a visit to cover this background in person. But after I'd penned the two-page intro, he felt that it was "a very good overview of the unit and my company; really very good as it is not easy to condense both into two pages. So it's probably best to visit when you review the LaScala or Olimpico. With them so many things fall outside the textbooks that the first reaction usually is "that cannot possibly work". But the implementations offer very good performance at least according to their owners." 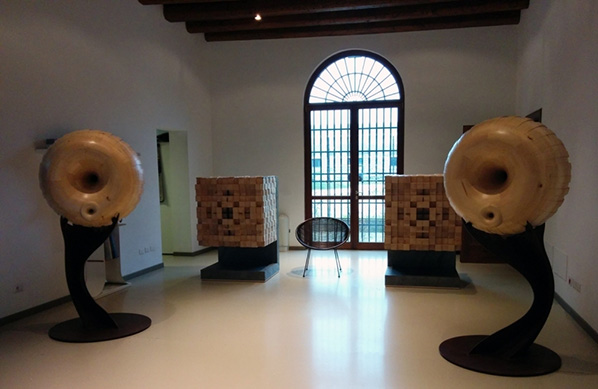 "The ZeroUno HPA isn't exactly textbook either. With me a project always starts with given elements that I want to implement. Hence I usually don't follow trial and error when it comes to circuitry. I always begin with fixed building blocks and the budget available, then simulate the lot on the computer to discover the weak points. Today's CAD CAM tools really are fantastic for that.

"I build the first prototype and tune it. Often I wind those first transformers by hand. It's difficult for me not to use at least one transformer in the signal path. That process of optimizing the magnetics takes time but I usually get to where I want to be. It's rarer that I must change everything and go back to the very beginning. But then I'm lucky. I'm no longer young. I've seen a lot of electronics in my work over the years.

"Feel free to ask anything. I'm not secretive about my circuits even though I do stop short of instructing copy cats. If you note anything of interest in your listening, ask me about what choices I made to realize that particular quality. Be critical. Criticism always is a chance to grow. I designed everything in the unit, the electronics, mechanics and the layout. Sometimes the results reflect the available budget, sometimes a personal choice."

At right and in the video below, we see the 105dB Sinatra System from Corum Audio. It's one of the OEM projects Mario is involved with. Its speakers use a 15" paper-cone woofer per separate bass cabinet with built-in diffusers, a 2-inch horn-loaded Beryllium midrange, a horn-loaded 1" Beryllium tweeter and an optional Beryllium super tweeter all driven by at least  24/96 DSP for less than 1ms signal delay and claimed bandwidth of 7Hz to 32kHz.

As we saw, this was a very ambitious project. By contrast, our review subject is far more modest and of far smaller visual footprint. When mated to top-shelf headphones, that compact theme continues. But because it mustn't deal with room issues or make multiple drivers behave as one, it promises potentially superior performance than any but the most ambitious of speaker systems. Small isn't just beautiful. Small can be very smart.

My first questions were about digital not analog volume, USB power and confirmation that the XLR3 and XLR4 outputs weren't truly balanced. About the volume control, "we must consider its noise floor. In an analog potentiometer where better mechanisms use two pots joined by strips and brushes, the residual noise floor decreases with applied signal. The SN/R remains almost constant regardless of playback level. You decrease the volume, you decrease the noise. Digital volume is based on internal math. Precise explanations are found with ESS, Logitech, here and here. The conclusion is almost always the same but the linked pages are boring and very technical. It seems that their authors talk about the sex of angels.

The grammar police would point out that it should say 'not locked' or 'no lock'.

"Here is my very simplified version. With 16-bit volume control bypassed, a 16-bit/44.1kHz track renders at full resolution. With each 6dB of signal cut, you sacrifice one bit so at -6dB, you work with just 15 bits. At -30dB to -40dB of attenuation which is typical in the home, you throw away 5-6 bits of resolution. Now lowering the volume increases your S/NR. And digital noise is ugly because it is random, uncorrelated with the music signal, so easily heard and disliked. Without argument, 16-bit digital volume is inferior to any analog pot.

"But with 32-bit digital volume, a 16/44 track moves its music samples into the upper parts of the 32-bit words. Now you have 16 bits of extra resolution. As long as you attenuate inside those, you don't bit-strip the original signal. 16 bits of extra resolution afford us 96dB of lossless attenuation. That's more than enough for any possible scenario. Now 32-bit digital volume beats any analog pot on S/NR. But there are more gains.

With digital volume, channel tracking is perfect today and 10 years down the road unlike moving brushes in an oxidizing pot. Also, analog pots insert in the middle of the signal path where everything leaves its finger print. ESS's on-chip 32-bit digital volume is just an algorithm which doesn't touch the original sample of the streamer or PC. In my ZeroUno DAC Plus with the two added analog inputs, the digital section is identical to the HPA. Then I add an analog input stage with its own power supply. In the middle is an analog CS3308 on-chip volume control. Comparing that to the ZeroUno models with digital volume, the performance is identical."

About USB, "you're correct about an ultra capacitor. +5V from the source through the USB interface detects that the source establishes a connection. It's a handshake. In 99.99% of all cases, this +5V is generated by a switching power supply. That risks polluting the PSU in your DAC and tainting its conversion process. Now good practice uses the +5V for just the initial handshake, then isolates it as much as possible. So I use an ultracap with dedicated charger. But at the output of the USB board, I add a 3-channel optocoupler to completely isolate the streaming sources from my DAC."

About the XLR ports, "you're right that the XLR4 is just for convenience and not truly balanced. But the HPA can also be used as a preamplifier. On the rear are two analog outputs. The inner one connects directly to the DAC to bypass my analog output stage. The outer one closer to the IEC passes through my class A output stage. This output can be fitted as a true balanced output for better signal isolation. Now a ground loop becomes impossible to improve the system's overall noise floor." This begged the question what the available gain options settable inside the menu are. Next I thought to ask about the various custom digital and jitter filters which Mario had written into his proprietary firmware.