"The flow of electricity through cables causes magnetic fields. Those interfere with the flow as a direct counter-electromotive force. It's why demagnetizing CD tracks exists. Without such treatments at least once every six months, cables get magnetized. Their conductivity decreases, their impedance increases and sound quality declines gradually. Our Quantum Field opposes this magnetization effect and lowers the cable's own impedance to reliably improve signal transmission. So our device prevents cable aging from magnetization. Even though our circuit designer dismissed it as a meaningless exercise, for fun I wanted to change the LED color. That's when I discovered that white had very good resolution, high speed, wide dynamic range and a neutral tonal balance. Red had higher density and saturation with a more relaxed softer soundstage. Green created richer harmonics and warmer tone. Blue was too aggressive and hard. Based on 'neutrality', white became our default color but the subtle changes of red and green are too interesting to discard so they're available by request."

"Seeing how the Quantum Field creates a virtual ground effect, we've now started development on a dedicated grounding device which will be called BOP Quantum Ground. I first tried to incorporate it into the existing Quantum Field. Once QF cables are used, the grounding effect simply diminishes. A separate device is needed. To be honest, this whole project didn't start on a clear scientific basis. Common engineering sense would never have attempted to develop the BOP QF in the first place. In hindsight, there are some hints in existing principles like the solenoid coil which provides active shielding. There's also the Lorentz force which might explain why, if the winding direction of the QF cables is reversed, it has an adverse effect on the sound. Finally, because our device is sensitive to physical micro vibrations, we've adopted Hifistay's 3-layer swing technology footers. Despite adding significant costs, their solution was the best so we incorporated it."

In short, today's product is the result of a very lengthy design process which began with an accidental discovery. It then pursued it systematically across 8 years to learn how to reliably exploit and magnify the effects. As its designer confessed, no textbook engineer would have bothered. It took perseverance and many dead ends to arrive at a final product. The most successful use should depend on following the instructions to the letter. Suddenly the devil on my right shoulder behaved as though chastised. I didn't know devils did that. But then their job description is to be deceptive.

DPD delivery from the UK was very prompt, triple-boxed packaging expected perfection. So were the innards. Given lower box count and shorter cables plus Hifistay's loaner Mythology Transform X-Frame rack arranged double wide, the upstairs system was the obvious destination. No wider than the diminutive Bakoon AMP-13, the immaculately finished Quantum Field box huddled right next to it on the same shelf.

John Lim had recommended a 24-hour break-in regimen. I'd wait accordingly before spiral-wrapping my first set of same-type cables i.e. four AC cords. The truly declassé Chinese wall wart hid out of sight. It plugged into the same Puritan Audio Labs PSM-156 AC/DC conditioner as the electronics. Besides the variable-gain amp, those were a Soundaware D100Pro SD card transport and Denafrips Terminator DAC in BNC S/PDIF mode. Speakers were Cees Ruijtenberg's Acelec Model One topped by Franck Tchang's omni super tweeters. As rear-ported 2-way monitors, these Dutch aluminators are stand-ins for this most popular breed of speaker. A set of LessLoss Firewall for Loudspeakers represented the serious tweak domain. 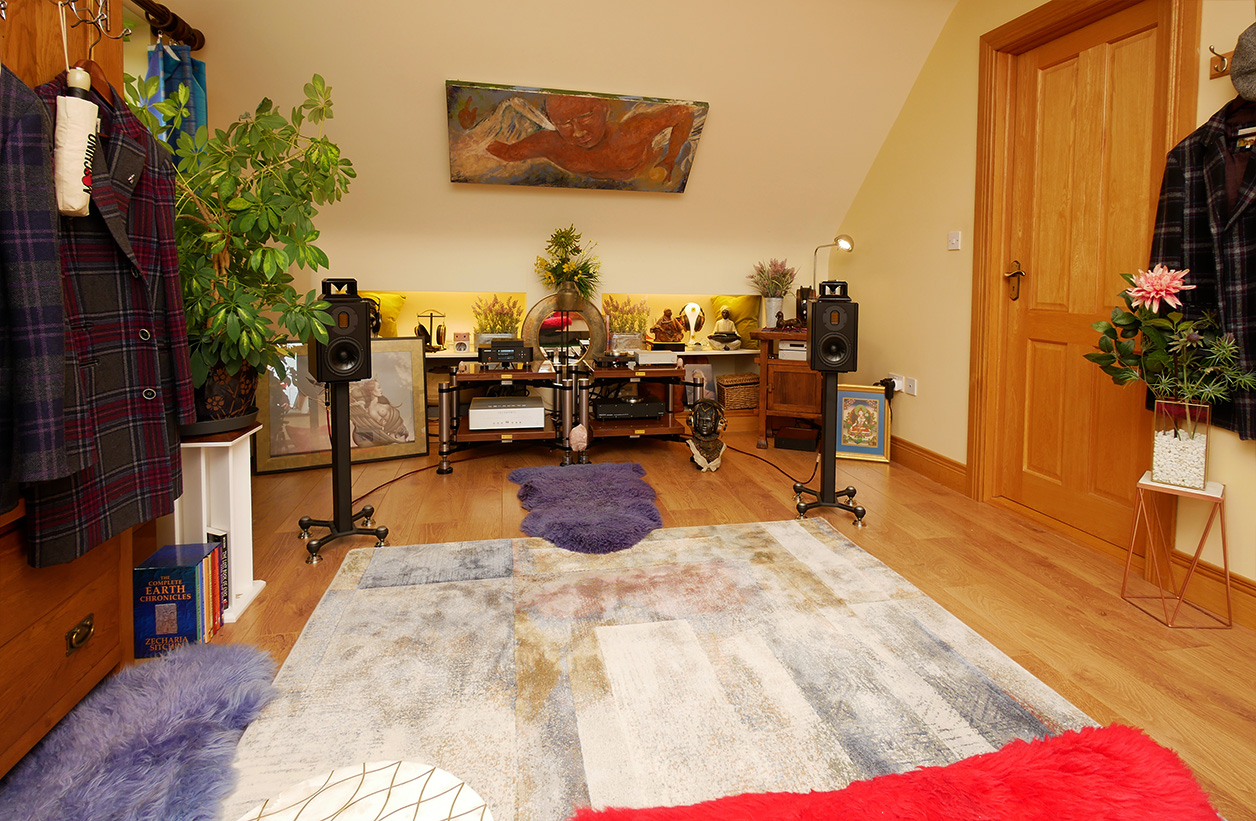 John Lim had another tip. "You know already to change the DC voltage from 1.2V to 7.8V as indicated by 10 levels on the front panel. From field tests we've learnt that generally, power cords do well with voltages higher than level 4 or 4V. Interconnects and speaker cables tend to prefer voltages below that. The final determination of course rests always with the owner of a specific system." The included owner's manual was still just in Korean but the many illustrations were clear as day. Aside from the stock four QF cables with white diodes, John had also included two each in green and red. The angel on my left fluttered its wings in expectation. The devil sat still in probable exasperation. Or perhaps he was just rehearsing foul curses?