"Front and center on the power supply is the damper-diode tube. This is a special type of diode and not like the standard 5U4GB or 5AR4 rectifier variety. It has a sub 10V drop across the tube and can handle up to 5'000 volts continuously. This is used to allow a slow warm up of the 1'100 volts that feed the 211/845. It uses a 12-pin socket and can only be inserted one way, with the space between pins at the front center of the amplifier. Only the 6CG3, 6CE3 or 6CD3 type may be used. Since transmitter tubes like the 211 and 845 conduct immediately when powered up, the damper diode will give a 10-15 second delay while the input and driver tubes heat up. When the current meters rise up, the amplifier is ready. Should one or the other current meters not rise, this would indicate either the 500ma fast-blow fuse for that channel has failed (accessible under the bottom plate of the amplifier on the back of the chassis) or the power tube in that channel has failed. Try replacing the fuse first to determine cause." 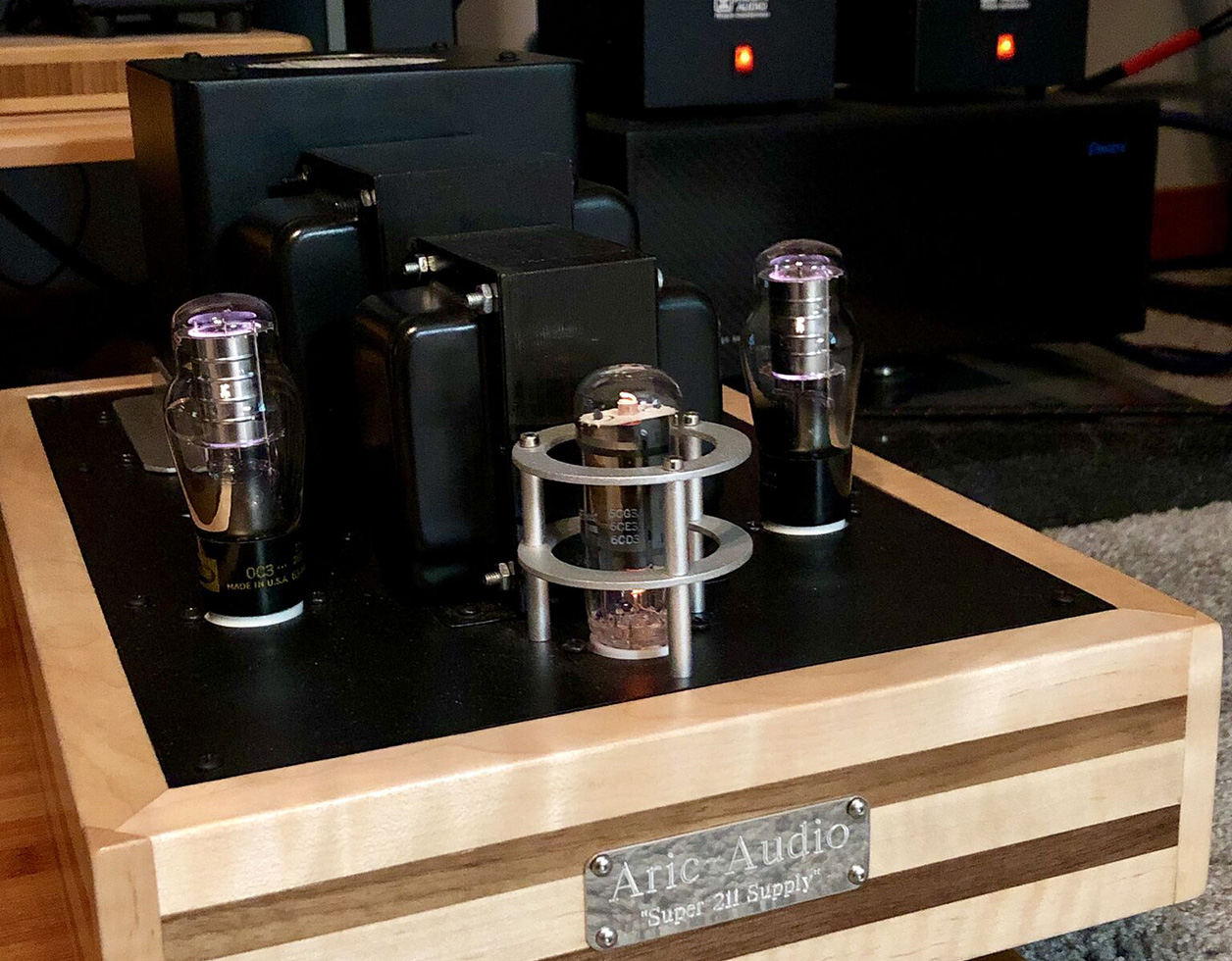 "The second row of tubes in the amplifier are OC3 regulator tubes. Only the OC3 may be used as they regulate a specific voltage within the power supply. Use of an OD3 or OA3 are not permitted or failure could occur." Specifications include 100kΩ input impedance, S/NR of better than 90dB, 25/35wpc RMS with the 211/845 respectively, Alps Blue Velvet attenuator, RCA-only inputs, ceramic tube sockets, 40/52lbs for the amp/power supply and dimensions of 18x12x9.25"/18x12x10". Warranty is 2 years parts and labor.

My first music selection was tenor saxophonist Sonny Rollins' East Broadway run down album when Rollins was at the height of his powers. He is joined here by Freddie Hubbard on trumpet, Jimmy Garrison on bass and Elvin Jones on drums. Two mesmerizing aspects of the Super 211 SET's abilities burst out from the Tekton Design Perfect Set speakers. First was the density of color and unique tonality of Mr. Rollins' instrument. All of his unique tonality and embouchure was most vivid and present in highly resolved fashion. At the same time the sense of weight and authority he could produce when 'on' as he was on this historically important recording erupted into my listening space. Another quality on display was the dynamic impact of the volcanic drumming of Elvin Jones. I had never heard a SET deliver such startling transient speed and this type of low-end impact on bass drums strikes before. 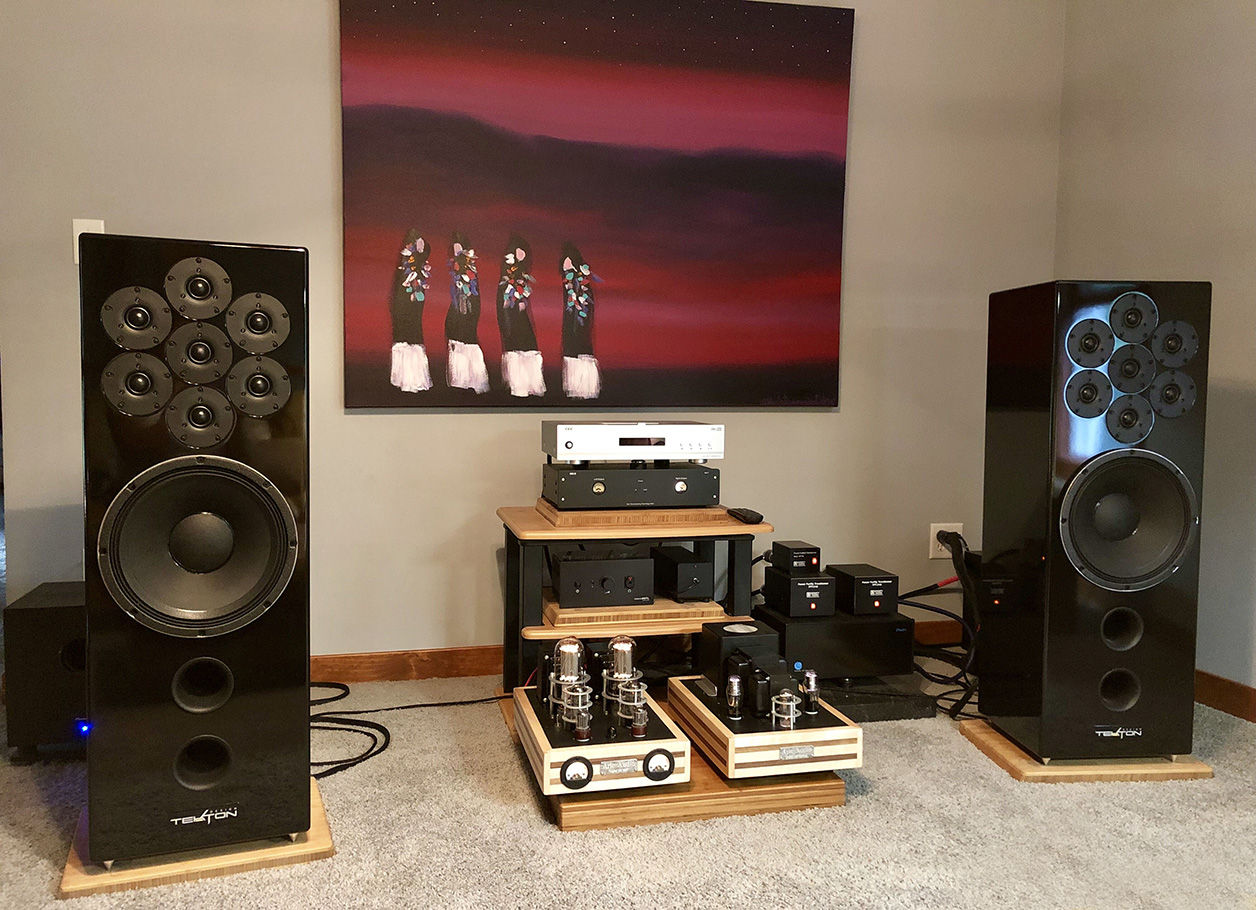 The Perfect Set speakers of course were designed with SET amplifiers in mind. They never dip below 8Ω and have a sensitivity of 96dB. Because of these design parameters I could get to the same volumes with very low-power amplifiers to make comparisons. When I inserted my Canadian Triode Lab 2A3 SET, it was immediately apparent that the pace of the music had slowed to a far lower level. The bottom frequencies were not as extended, sounded somewhat mushy and had lost resolution in tonality and accuracy.  There were two more noticeable differences.

First, the 2A3 amplifier was not as resolving of small micro detail like the decays from Elvin Jones' cymbal brush work. Other music nuances regardless of frequencies were harder to hear. The 211 had the lower noise floor thus higher resolution. The 2A3 also wasn't as balanced throughout the spectrum. Besides the loss and lesser quality of the bass, it also sounded slightly rolled off in the very top. The midrange beauty of color and image density were still present but now the overall perspective had lost its balanced linearity and seemed slightly bloated and weighted towards the mid band, frequency extremes recessed.