"Overview and design considerations: The 211 and 845 transmitter tubes have always presented somewhat of an enigma as a large power tube typically run single ended and originally used in WWII to transmit radio signals across battlefields with plate voltages in excess of 1'000V to maximize linearity and gain. Many current amplifiers try to run these tubes at lower voltages and without a robust driver which prevents them from producing more than 15-20 watts. As such they do not realize the full glory these tubes have to offer. My Super 211 SET's goals are to execute a proper single-ended build utilizing these two famous tubes without any Achilles heel to present the full spectrum." 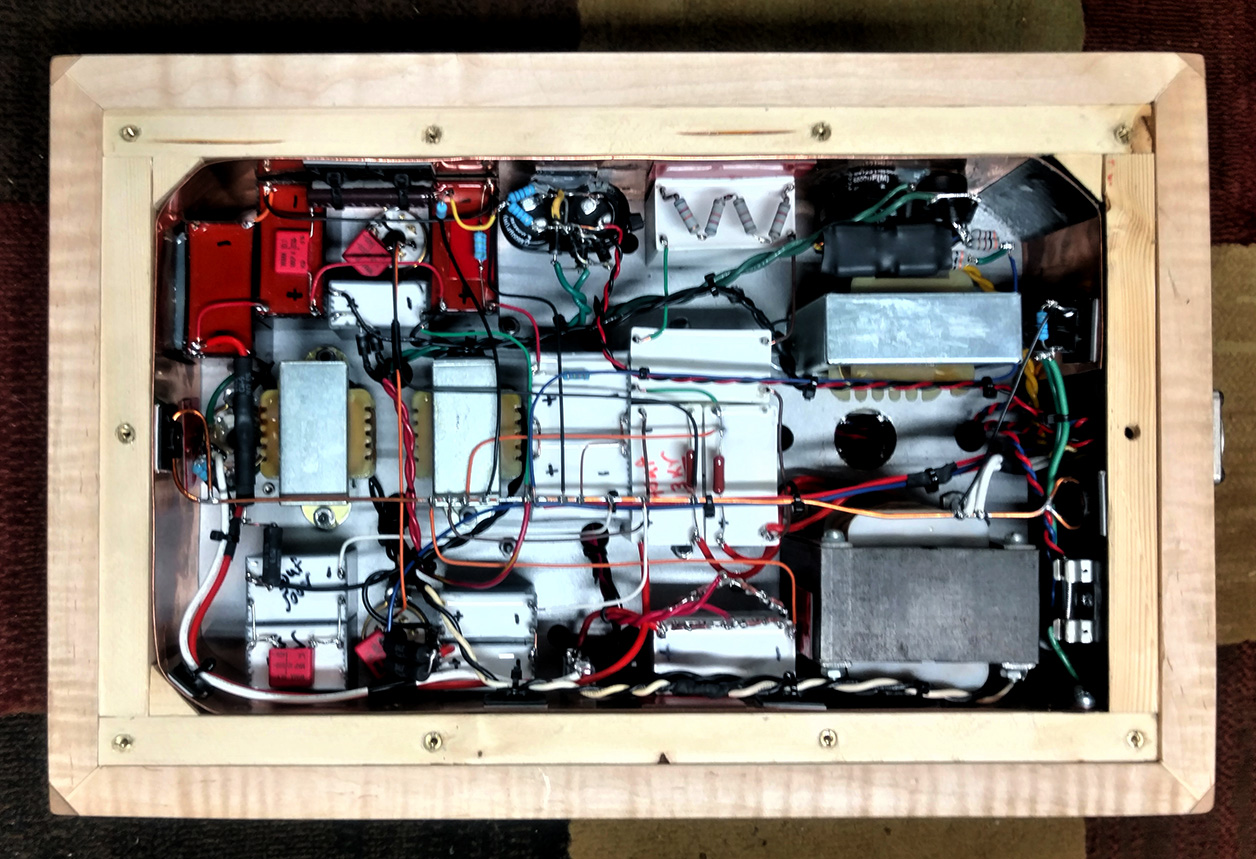 "So the driver for them is another power tube, an EL34 run in triode for very low output impedance and over 200V peak-to-peak to push the grid of the 211/845 even when it's drawing positive grid current which occurs when these tubes are run at anything above 10-15 watts. Using a proper power supply strictly for the driver and input tubes that feeds them their proper voltages and currents allows the amplifier to produce up to 30wpc of low distortion power and up to 40 watts with graceful overload characteristics without hit-the-wall distortion or hard clipping. This amplifier essentially has an onboard power amplifier to drive the 211/845.

"Not an off-the-shelf amplifier: This amplifier is completely hand-built from the chassis woodwork to the top plate and all its internal point-to-point wiring. All leads have a mechanical connection to their terminals and are soldered with 8% silver solder. There are no circuit boards to warp and crack with age nor any circuit traces to lift or burn with time. This amplifier is designed to last a lifetime, be completely serviceable and pass on to the next generation. This isn't your typical "trade it in after a year for the next model" type amp. The outboard power supply is carefully laid out, with parts chosen specifically to reliably produce three high-voltage outputs for the plates and three low-voltage well-filtered DC outputs for the filaments of each tube. There is a separate power transformer as well as two filament transformers just for the transmitter tubes. There is an additional power transformer and two heater transformers for the 6SN7 and EL34 so each voltage stage has its own transformer."

"This means that when the power tubes draw current, they do not affect the driver or input tubes or vice versa. High quality lifetime-duty film capacitors are used throughout on the high-voltage supplies for superior reliability. With these 1'300V rated capacitors, multiple units in series are not required to handle the high voltages of the 211 and 845 like they are in most amplifiers utilizing these tubes. This means the capacitors react very quickly to rapidly charge and discharge. This provides a low-impedance power supply as one of the key ingredients for transparency and response time." 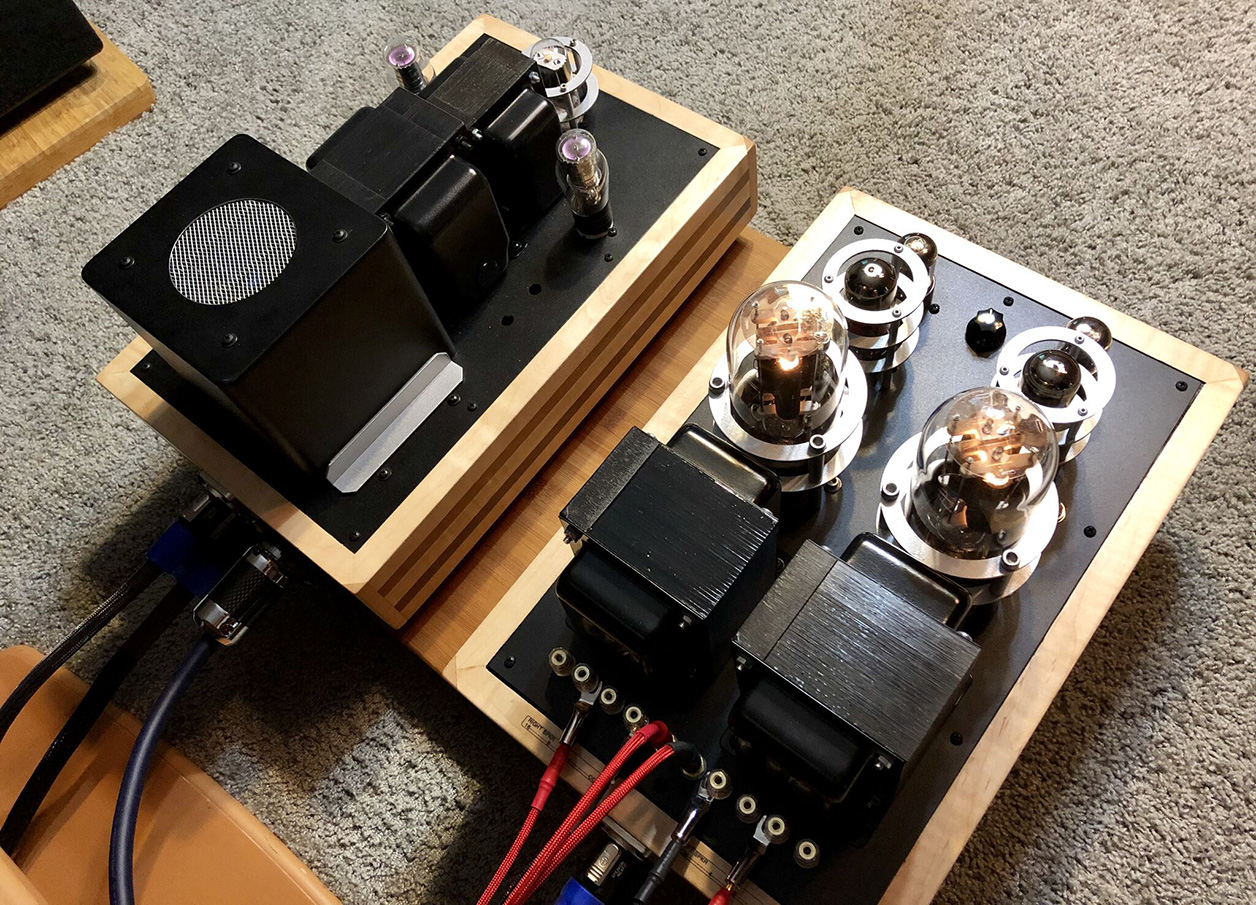 "There is also a 'damper diode' slow-start tube to slowly ramp up the 1'100 volts on the output tube anodes which is a very reliable way to ensure that the large transmitters do not start to conduct (play music) until the driver and input tubes are properly warmed up and ready to operate the way they were designed to. As an added benefit, this also prevents turn-on pops or spikes which could damage the speakers and/or amp. A pair of gas-charged regulator tubes provide regulated voltage for the 6SN7 tube as well. Other all-in features include a copper-lined chassis for the power supply and amplifier, all Schottky or ultra-fast recovery rectifier diodes for extremely smooth power delivery without the switching noise of lower quality diodes. There's choke filtering for each power stage within the amp since chokes provide the best isolation between stages and noise though they are more expensive than capacitors. There are film cathode bypass capacitors and extremely high-quality German Audyn True Copper coupling capacitors between all audio stages. There are cheaper ways to build a 211/845 amplifier but none as effective at keeping the amplifier dead quiet or providing lightning-fast transients due to the exceptionally fast rise and decay times. There is finally less than 0.5mV of residual noise at the speaker terminals, very rare with large transmitter-tube amplifiers."