With my compass now pointing exactly at my entirely subjective very personal north—system building is all about pleasing our ears—we'll cover some music examples to map Sensa's reach. For bass, consider this mellow dub number from UK formation Bombay Dub Orchestra. The lowest bits of this "Rare Earth" bass were fully present and intelligible all throughout the layered production. If that's how low you go, Sensa will follow without dropping a thing. Likewise for immaculate sorting across a feathered-out soundstage.

For a seamless tonality test, follow the opening track of the Arshid Azarine Trio's 7 Djan project with its slight E.S.T. vibe. The piano covers percussive bass accents and legato upper right-hand work. With some speakers, these opposing registers exhibit disparate tonalities quite as though they belonged to two differently tuned instruments. Sensa showed admirably continuous tonality from top to bottom and managed an unusual degree of sound-board aspects to anchor the metallic strings to resonant wood for a more burnished than hollow or glassy flavor. Capturing the sonic gravitas of a concert grand tends to elude small speakers by getting a bit pinched. Here the short French towers did very well – better than our thrice-priced ceramic-driver Albedo Aptica 2-way towers. They also convinced by how forcefully the opening piano chords and percussion beats cracked; and following the bass solo without fading out prematurely on reach.

When executed well, whatever bass power and reach a smaller 2-way speaker must sacrifice to a three-way design with dedicated bigger woofer, it can have the advantage on tonal continuousness particularly on a piano's extended bandwidth. That becomes telling when it fractures into discrete bands or registers even subtly. Avoiding this common pitfall with such ostensibly simple ingredients like Sensa's was quite stunning.

Moving to lower male vocals like those on "Istemiyorum" from Cag Ercag's lovely Aydinlik Evler album, here with a slinky cello, impressed for the same reasons. The weighty sonority of the voice bloomed properly without over-emphasizing the close-mic'd sibilants or lip elements. The cello was clearly a cello recorded from farther away, not a nearfield viola.

For sending us back to samba school, a perfect teacher… 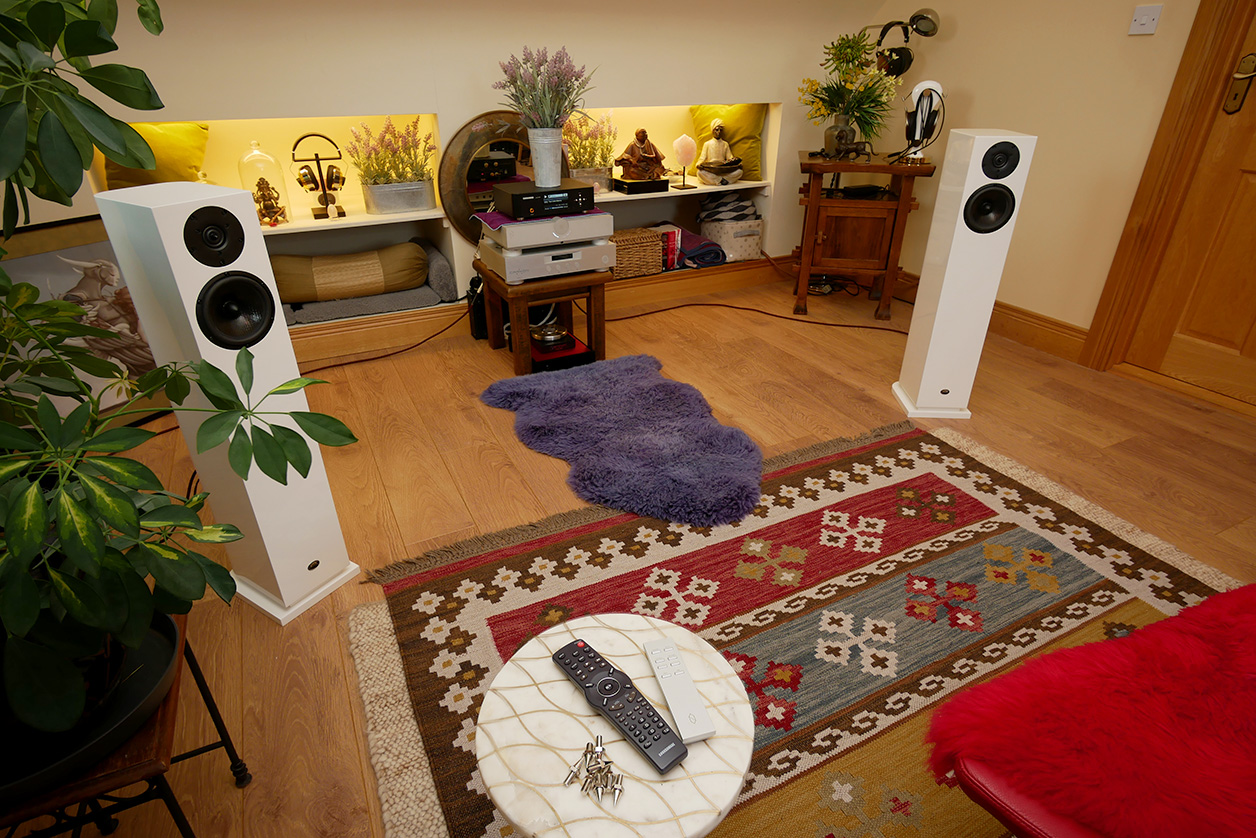 Sense spikes are shown on the marble side table.

… would be Brazil's Alcione. But here we catch her not in a rollicking carnival parade of majestic samba floats but the down-tempo "Você me vira a cabeça me tira do sério" for powerful lead vocals, fat backup chorus and plenty of sauce in the arrangement. Sensa was very much up to the task of conjuring up the electrifying presence of the belting stout diva. In short, across varied repertoire hosted in a mid-size space in line with the project brief, Apertura's Sensa did it all in the kind of mature fashion which, 1/ never would have one think of adding a subwoofer and, 2/ justifies to lay it on thick with upscale ancillaries. Their qualities won't somehow get stuck in the speaker. They telegraph loud and clear on the far side. At 90 watts, the Austrian Crayon integrated felt perfectly spec'd and scaled up with bigger quasi-symphonic material with headroom to spare. Its entry-level CIA-1 cousin at 78/105wpc into 8/4Ω would be ideal and priced to match.

Time to collect all of the pieces for the bigger picture.