For size comparison, here we see the the outgoing stand-mount Camerton Binom-1 from Berlin next to the incoming Sensa. White gloss lacquer is a lot less fussy relative to reflections, finger prints and visible dust than black. Moving the Germans out and the French into their wider stance was next, then clocking some warm-up hours with an SD card's 140-track playlist set on an endless loop.

Having just reviewed the Buchardt Audio S400 which at €2'000/pr + €300/pr for matching stands sells Denmark direct to increase its value quotient, the Apertura Sensa at just €700 more but sold through a dealer network demonstrates keen positioning. Not needing the visual mismatch which is a stand, almost any stand, it is no taller or deeper than a typical stand-mounted monitor. Clearly Sensa makes a lot of decorator sense. 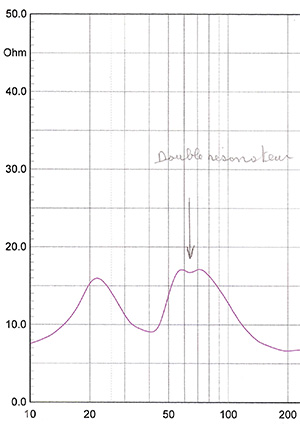 After inspecting the port to only spot a usual pipe of short length, I asked about the advertised double trouble.

"The double resonator is created through the interaction of the cavities formed by the panel braces and bull-pack damper material inside those cavities. It is something that's possible only with the mechanical design of some speakers but most of the time impossible. You are right that from the usual point of view, it remains a classical bass reflex with s single vent tube. There's no hidden secret, just Christian's acoustic science.

"The result is a bass extension to 40Hz at -3dB, quite good for a compact short tower."

By way of documentation, Eric Poyer had attached the left impedance graph with a handwritten arrow pointing at the second peak. Whilst at first I didn't grasp its significance in particular—all traditional ported systems exhibit this type of saddle response—I did appreciate that the severity of these impedance magnitudes was quite shallow, indicating a relatively benign load in keeping with the friendly overall profile. Then it occurred to me that the arrow pointed most exactly at a small depression in the main peak centered at 70Hz.

Now it was clear. The secondary/virtual port's action was precisely this reduction of the main peak's severity. And that meant a more efficient power transfer, hence more amplifier output in this range. If you've seen other impedance plots of ported alignments, you will have noticed spikes as tall as 50Ω. If your amp puts out 100 watts into 8Ω, it'll do about 1/10th into that high an impedance. That's the opposite of proper current control and linear response.

With Sensa's peak at 17Ω, your amp should still deliver ~50% of what it does into 8Ω. That's certainly very sensible. The peak at 22Hz is immaterial since it occurs well below the woofer's reach.

To conclude my intro, a direct also French competitor to Sensa would be the Davis Acoustics Courbet N°5 reviewed here three months prior. For exactly the same coin, it becomes a 4-driver 3-way in a parallelogram enclosure, with a front-firing port for the paralleled 5" woofers and a small decompression bore in the back of the midrange.

Olivier Visan's creation had long since hoofed it back to Troyes of course. But, I still remembered its distinctive sonic profile well enough. Without getting more specific which would require a direct A/B, I can say in absentia that on the same amplifier, the Davis operated with clearly higher resolution across its top two drivers. Its core voicing was leaner, faster and more lucid to take particularly well to Simon Lee's SAG all-in-one CD streaming receiver and our Pass Labs XA-30.8. Those two amplifiers are voiced bottom-up and slightly soft on top but very potent in the upper bass power zone. 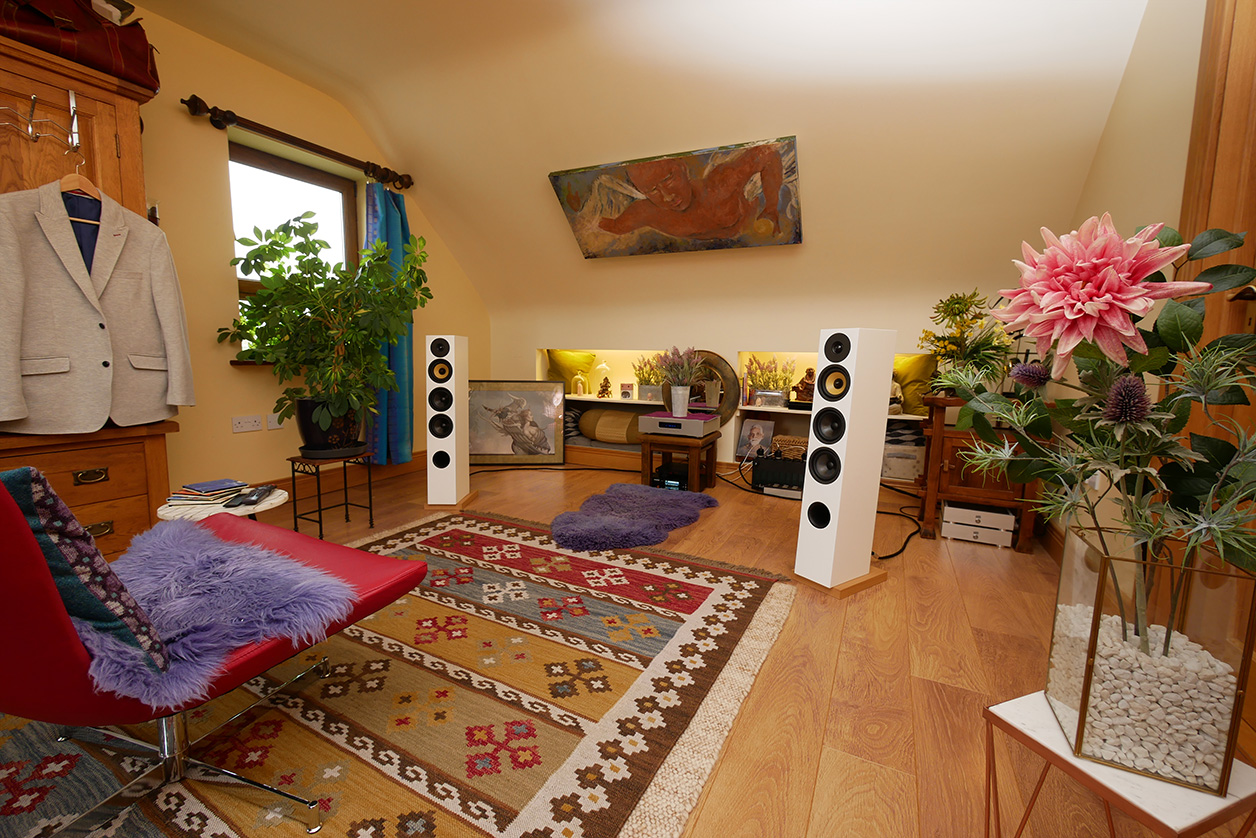 By contrast and like all Apertura I'd reviewed prior, Sensa cottoned perfectly to our very fast very lucid Bakoon AMP-13R. Sensa's voicing was warmer, slower and softer around the edges to not get explicit with a 0.5MHz circuit. That result also put the quick and energetic Kinki integrated into the frame for a 200wpc lap around the same course. Here Bakoon's baby only delivers 25wpc into 8Ω and twice that into half. In this space and to my ears, its output by way of raw SPL was easily sufficient. Careful reviewing would simply want to know what nearly ten times the power would do for the same load. On the same 200-watt score, I'd also try the Purifi class D stereo demonstrator amp from Bruno Putzeys and Lars Risbo. For high power on a relative budget, today's switching amps are often the first choice.