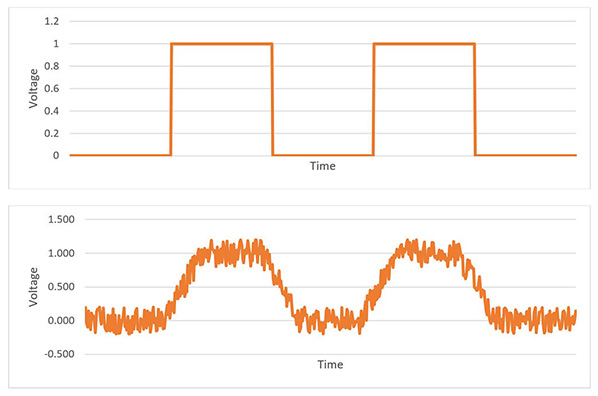 Seeing how Antipodes launched both lines simultaneously, today's review idea was to ask what their most affordable S30 offers for €2'950 and what happens at x 5 the cost with the €15'900 mountain-top K50.

Antipodes boss Jenkins has his own ideas about what really matters with computer audio and what less so. Here's a synopsis of his arguments. First, it's not really about 1s and 0s. Before this causes your heart to stop in helpless protest, obviously digits matter. Transportation of these two logic states from point A to B is simply quite trivial. Far less so is the most perfect representation of these two states by analog signal.

See the two right versions. On top is a perfect square wave which instantly and unambiguously oscillates between voltages zero and one with flawless upright edges. Given that digital data ride such an analog 'carrier wave', they require an analog voltage limit to trigger each 1 becoming a 0 and each 0 a 1.

The challenge is perfectly syncing this switching analog square wave to the sampling frequency. Logic dictates that as sample rates increase, so does this challenge. Hello ancient nemesis, jitter. Build in an esoteric atomic clock and job done? Jenkins doesn't think so.

The second wave at right is far more ambiguous but close to a poor real-world example. The lines are fuzzy, the rising and falling edges far more gradual and the exact timing of when zero volt turns one volt and back is far less precise.

The best clock becomes worthless if one overlooks the terrible twins of noise and bandwidth. Depending on frequency, circuit noise will shift the square wave's voltage states to incur the shown fuzz. Bandwidth i.e. speed limits show up as a slowing down of the rising and falling edges. In isolation, these effects wouldn't be as bad but since noise and limited bandwidth always appear in tandem, the result is jitter regardless of the built-in clocks' quality. Jenkins thus chases a clever compromise between the contradictory demands of low noise and maximal bandwidth. As so often, the devil's in them thar dark details. 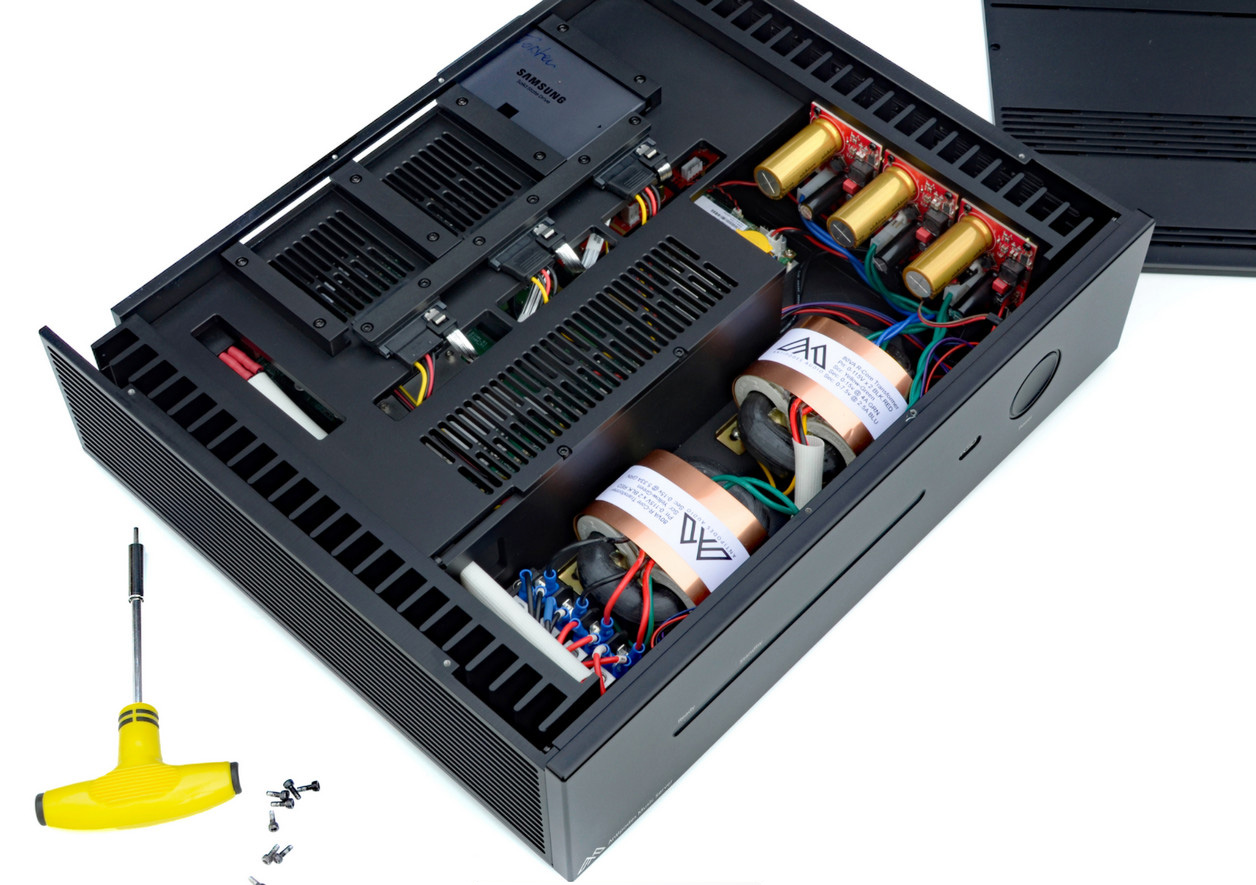 For example, take a music server with noisy switch-mode power. Now an output filter seems a good idea. Yet each filter becomes another bandwidth limiter to impact the signal. It's better not to create noise in the first place. That's not to say that only linear power supplies apply. While fundamentally quieter, they're also 'lazier' than switching equivalents whose higher speed can audibly profit specific sections in a digital circuit. In short, this subject isn't cut'n'dry but far more complex. Hence R&D for the new S and K models was quite involved to arrive at these hardware specifics: 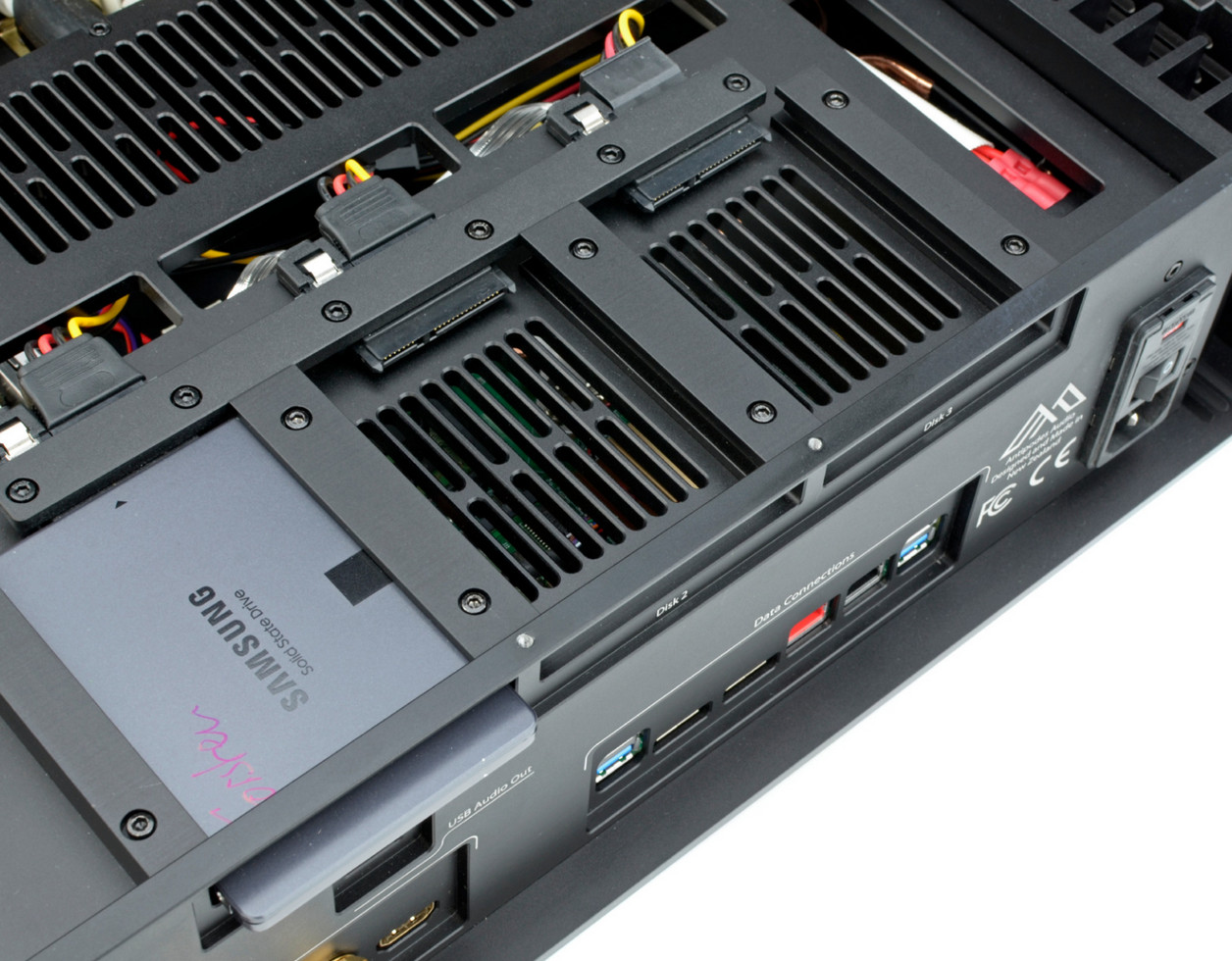 Motherboard selection and tuning based on sonic parameters all were in strategic pursuit of interference spectrum management. Individual chips and circuits were tuned such that individual noise contributions shifted spectrally or scattered. Mutually reinforcing noise interference was to be avoided at all costs. Power delivery for individual sections combines switching and linear aka hybrid power for the best trade-off between noise attenuation and bandwidth. Here laboratory measurements alone weren't sufficient deciders. Properly structured critical listening tests and endless prototypes were mandatory. The upshot of all this in-house R&D are three motherboards and two power supplies at specific quality levels plus a reclocker module. These make up the building blocks which in discrete configurations create the hardware platforms for the S and K range models.