Executive and Nordost teamed up in a large ballroom with a gorgeous Vivid loudspeaker fed by heavyweight Moon electronics. It's tough to please in a big venue but this combination got it right, delivering big brawny sound uniformly distributed over a wide listening area. 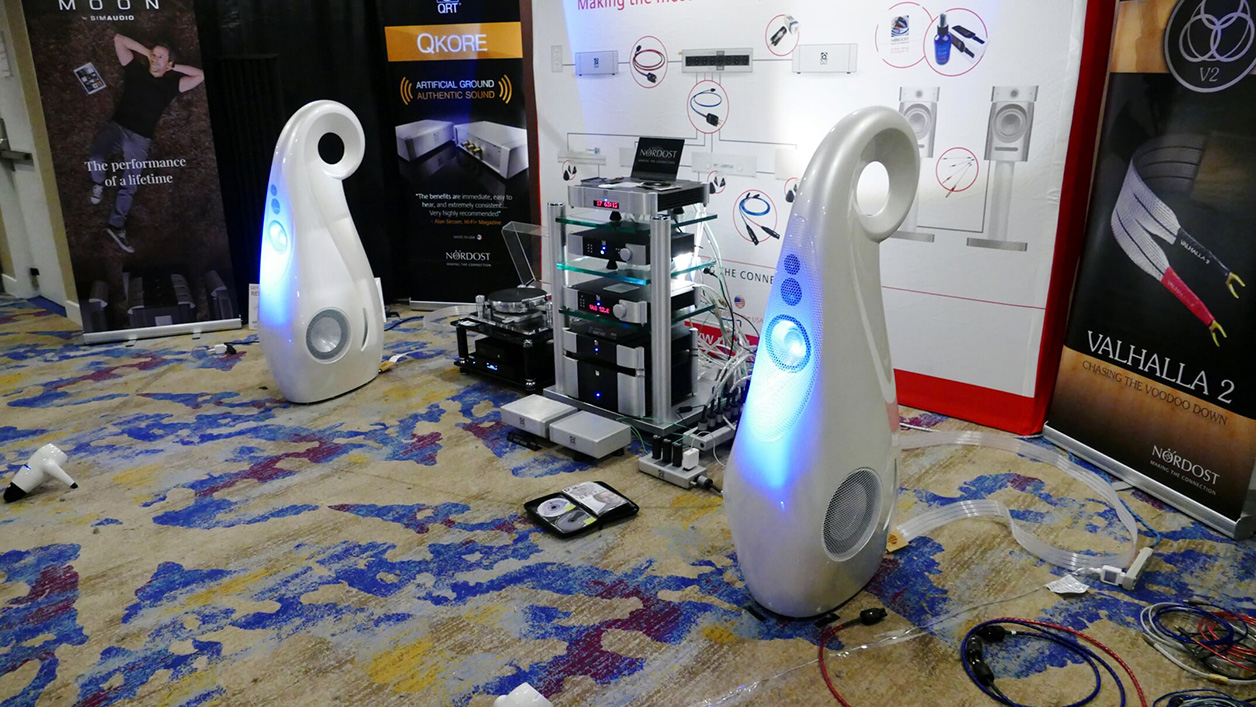 GemSen brought in a convincing pairing of Dynaudio and Parasound. I was happy to see Parasound back in the Canadians' lineup. The sound here was traditional John Curl, showing low distortion with effortless micro/macro dynamics coupled to a self-effacing quality. There was much to like and Parasound have a deserved reputation for nosebleed performance at real-people pricing.

House of HiFi had a lovely combination of VTL and big Triangle floorstanders. The result was meaty, visceral and aimed to engage. 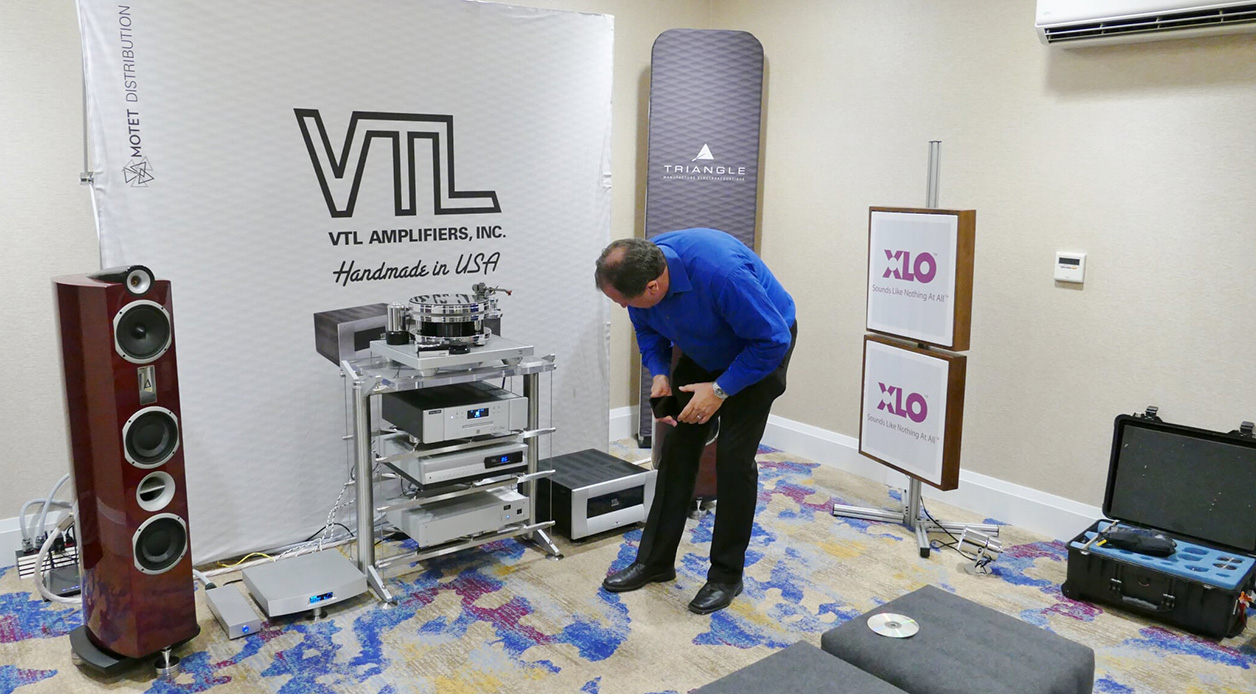 Kennedy HiFi assembled three different rooms from an old-school tube/Klipsch Forte/turntable systems to modern Klipsch in a tubular context to an NAD/ PSB Imagine 3B pairing. Hats off to applying the concept of different strokes for different folks. 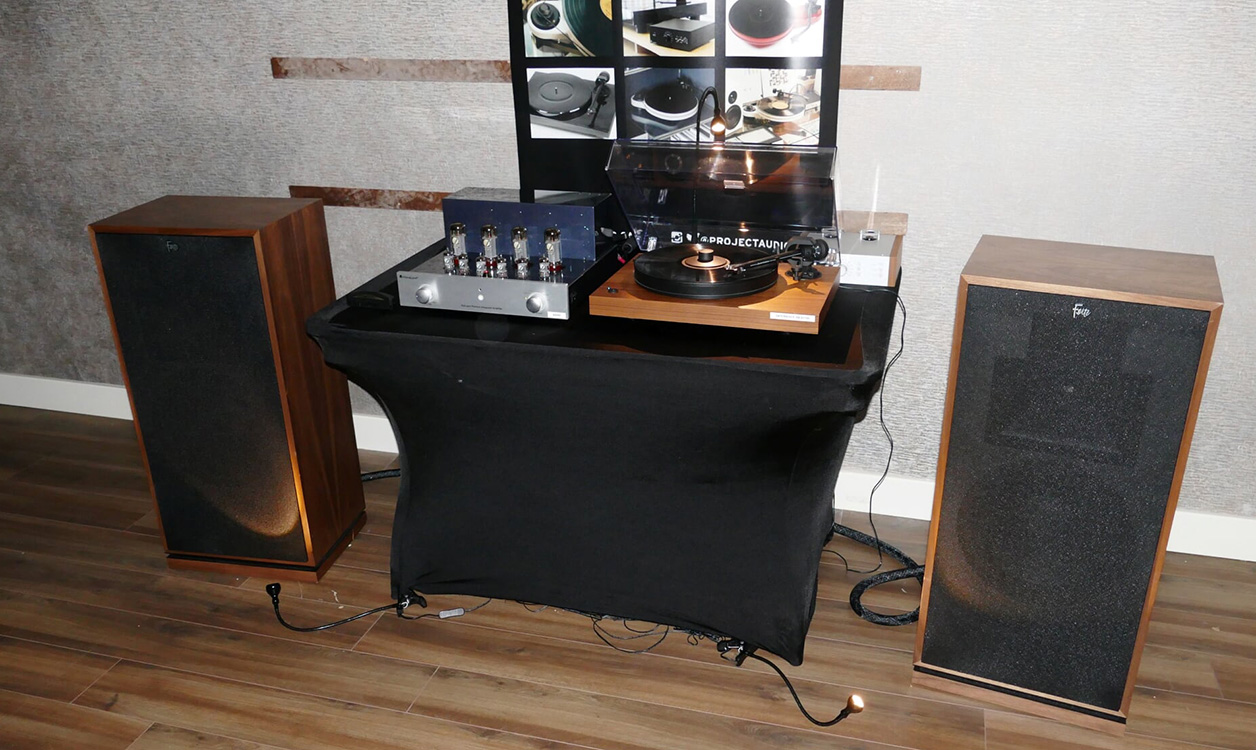 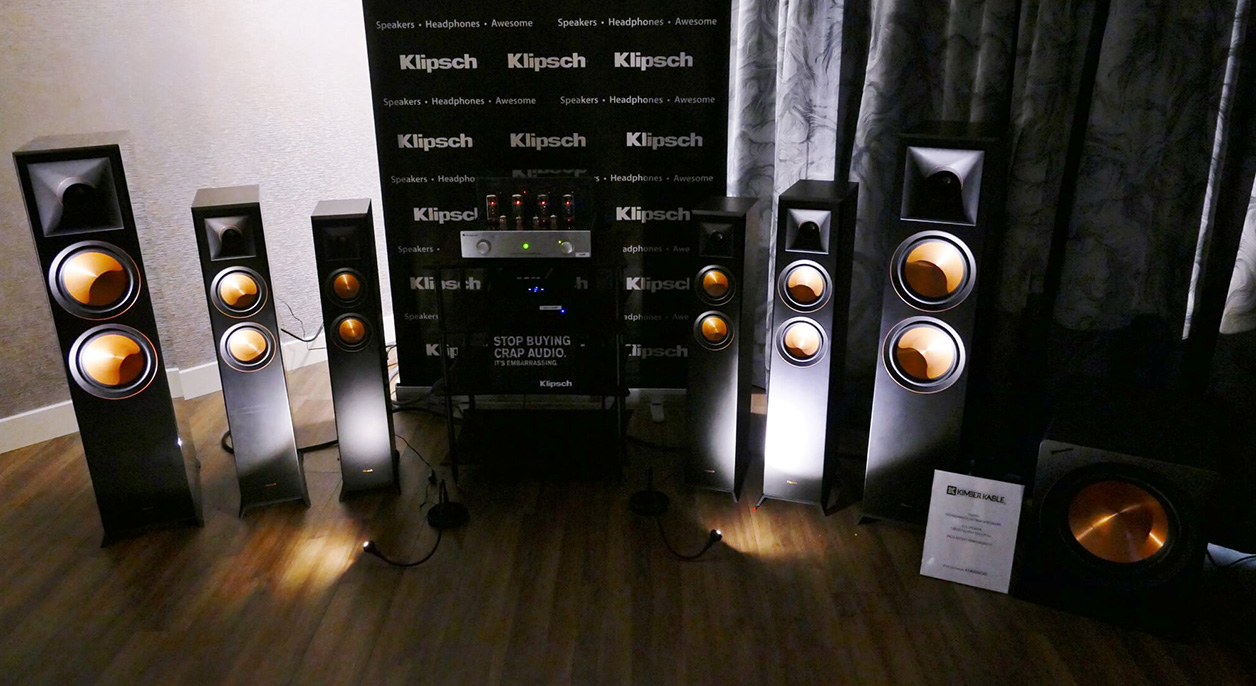 Lemay Audio occupied the Sutton C ballroom with 'if you have to ask' Tenor electronics, Baetis source and Kronos table fronting huge KEF Blades. This was a total dream system brought for our collective listening enjoyment. It filled the hall with ease and absolute authority. Those with small rooms need not apply. This was geared to palatial abodes. 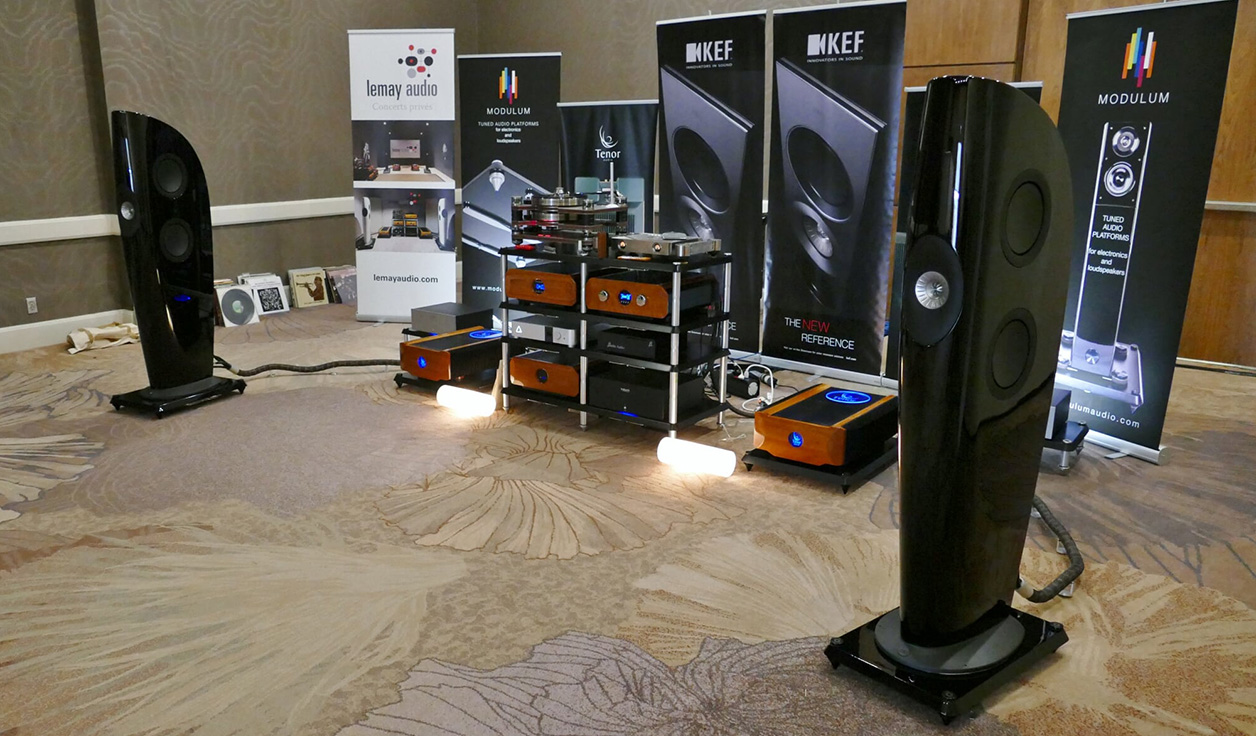 Paradigm occupied a large room but the vast majority of their floor space was devoted to static displays of subwoofers, various speaker models across the line and Anthem electronics. Their Premier floorstander did listening honors and gave a very credible account of its musical abilities, especially considering its very modest $2'50/pr cost if I'm not mistaken. 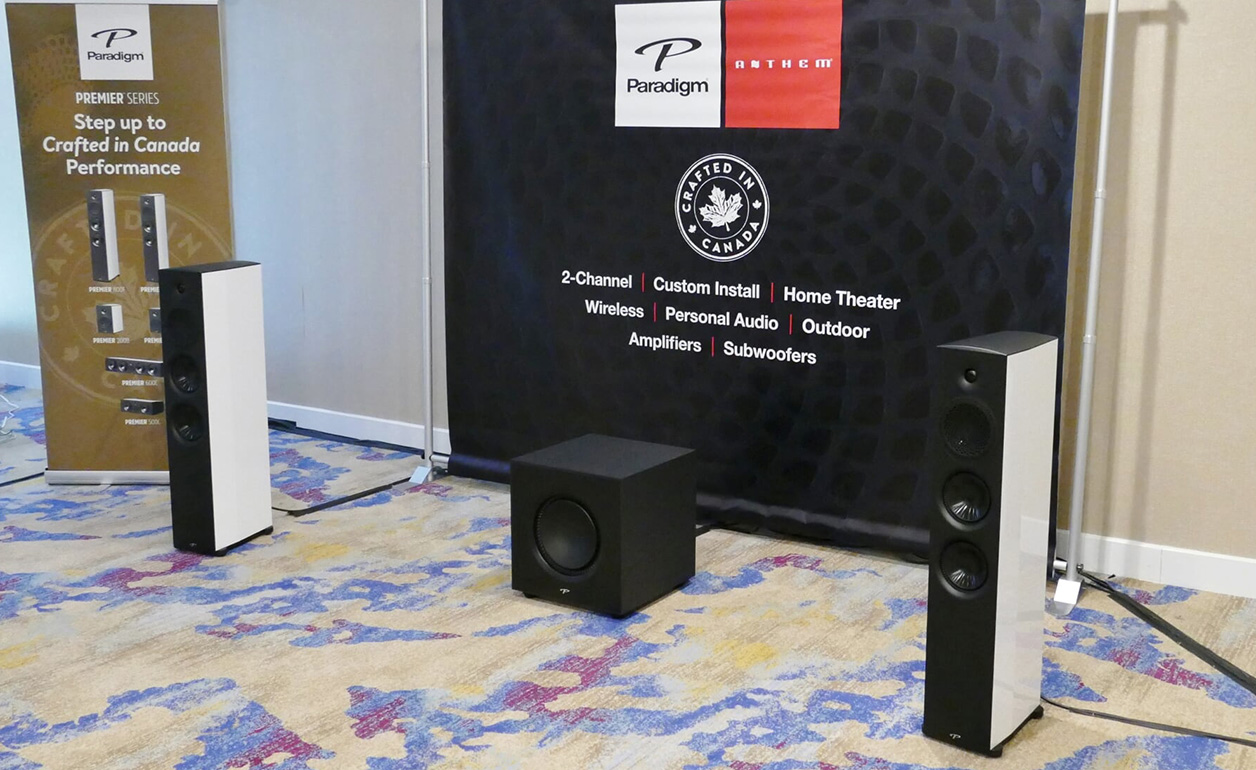 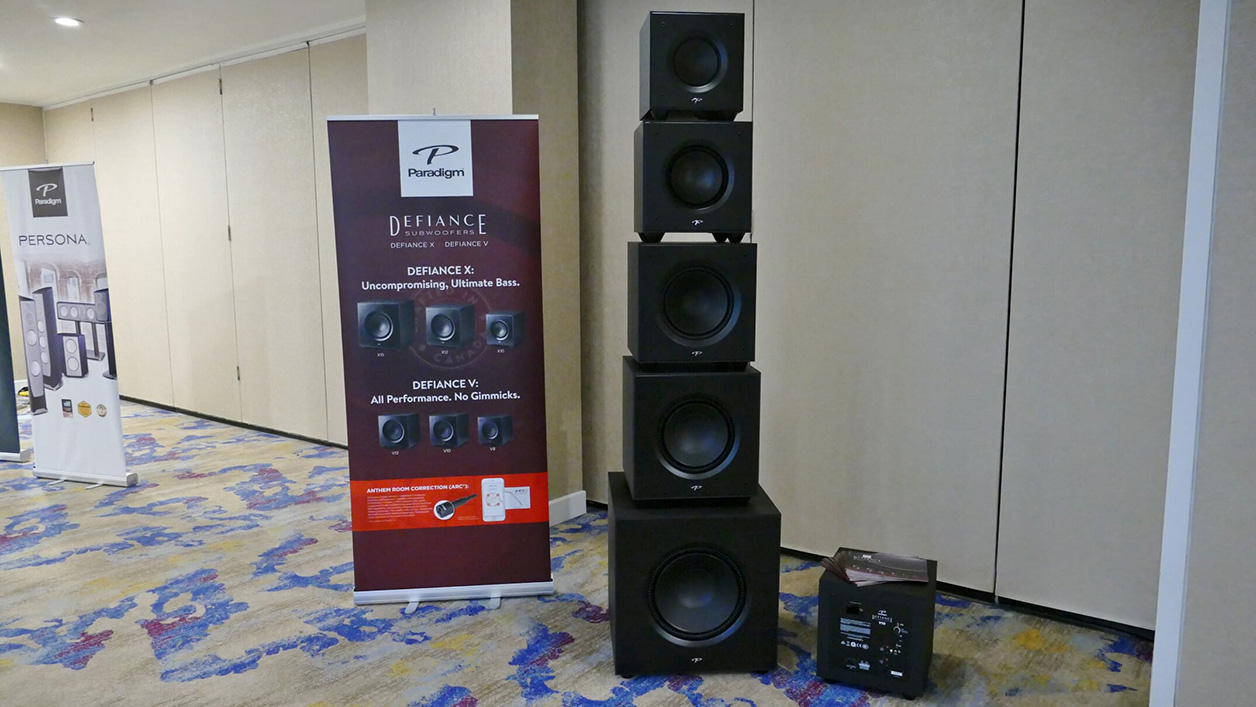 Plurison had a good area in one of the Sutton ballrooms but aimed more at displaying presence than dedicated listening areas. Their product was widespread to good effect. One brand they distribute is called SPL and seemed rather sonically accomplished. Wherever I encountered it, good sound seemed to follow. 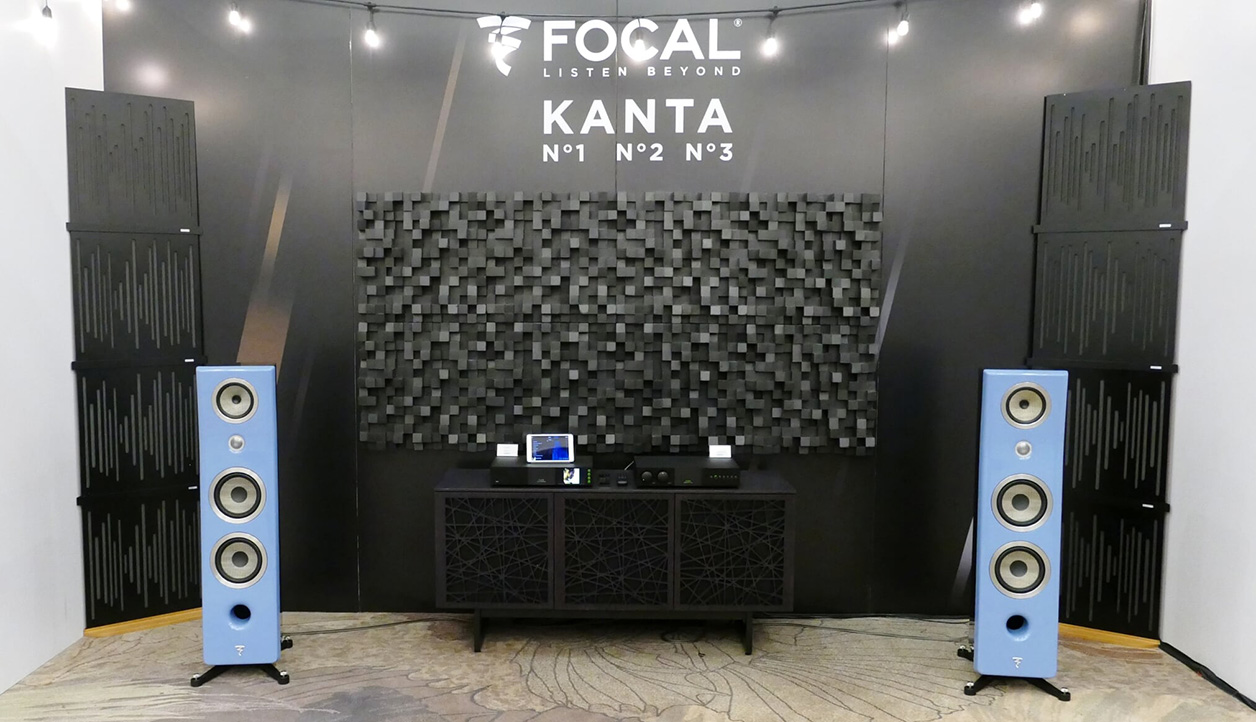 Reference 3A and Gutwire Cable accomplished good listening in their room. When I dropped by, Tash Goka's Reflector loudspeaker and Merrill Audio Veritas monoblocks served up infectious, lively dynamics coupled to a huge soundstage. 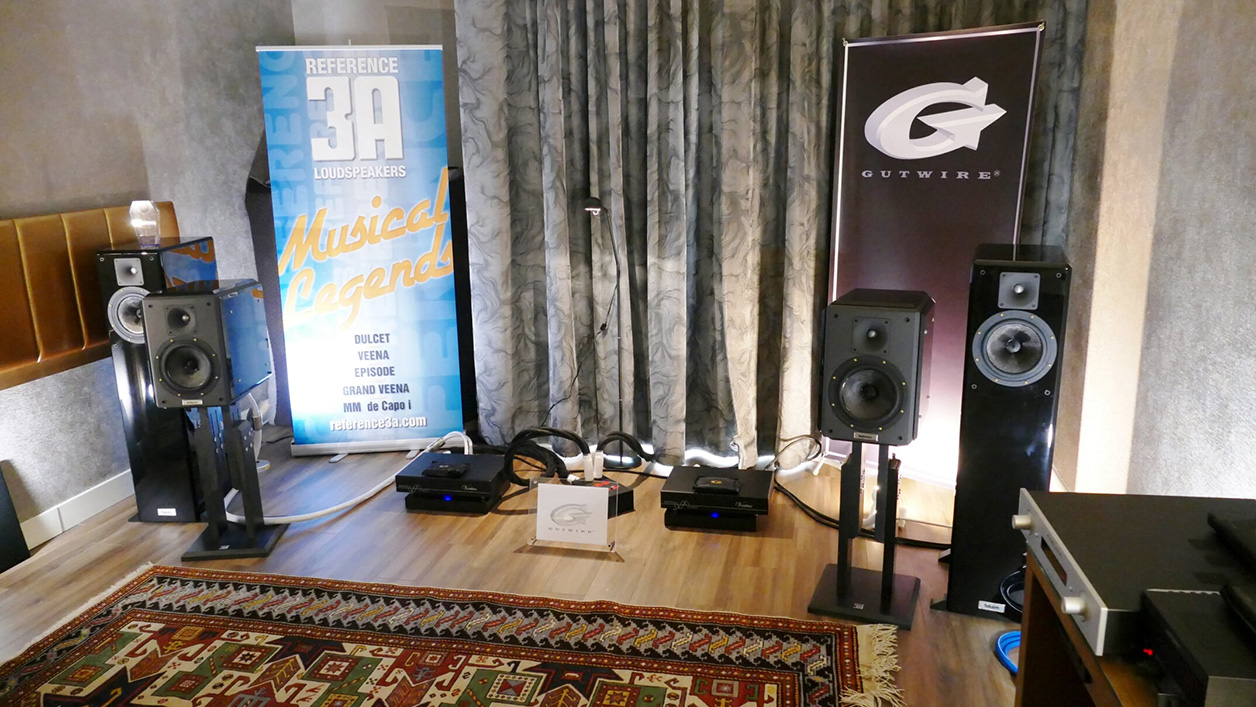 Solen are largely an extensive premium parts supplier for the DIY crowd but at the show demoed one of their rather polished kits, demonstrating that a little home effort can yield some pretty upscale results at fractional cost. 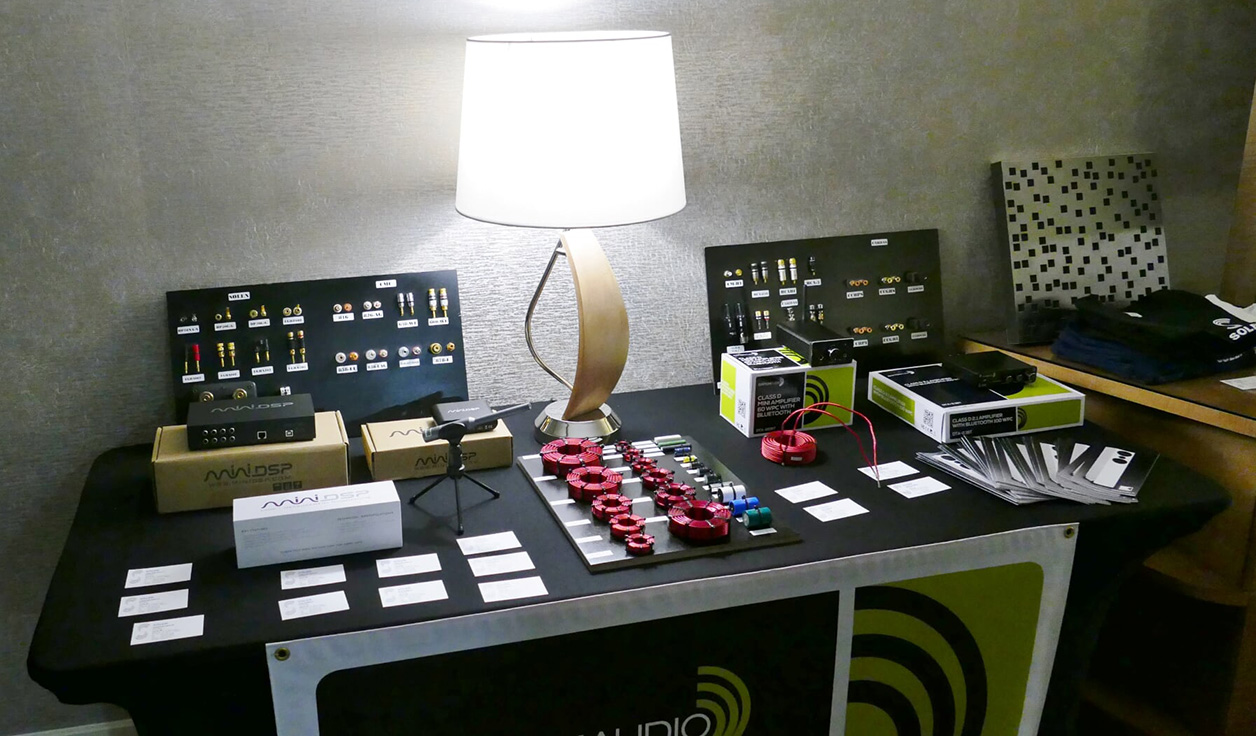 Sonic Artistry manned two rooms. In one, the $110'000 system comprised Audio Solutions speakers, a Bespoke passive preamp, Solution electronics and the fabulous TechDas Air Force V turntable to sound worthy of its tag – well balanced, dimensional and powerful. The system disappeared entirely regardless of listening position and only the music remained, existing in front, behind and beyond the speakers. This definitely was a contender for top honors. In a second room, the unconventional Larsen speaker held sway paired with Pear Audio tube preamp and hybrid amp. Controlled directivity paid off, producing a wide credible soundstage despite close-wall positioning. 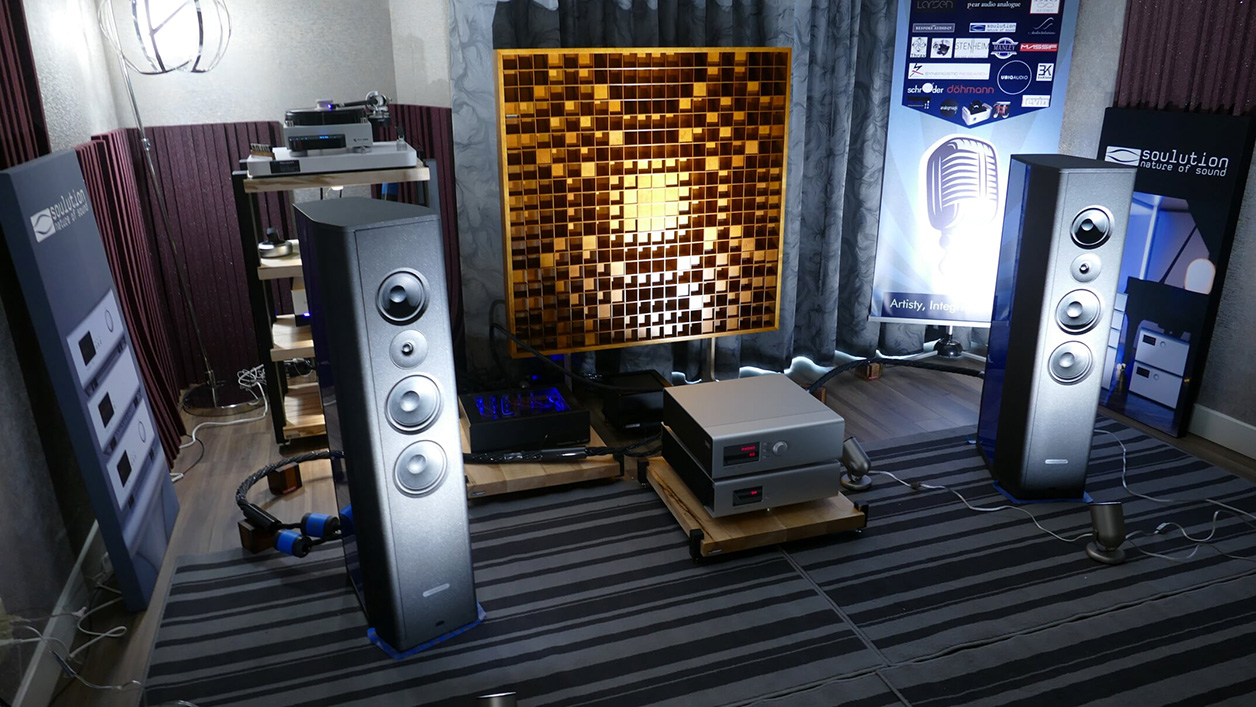 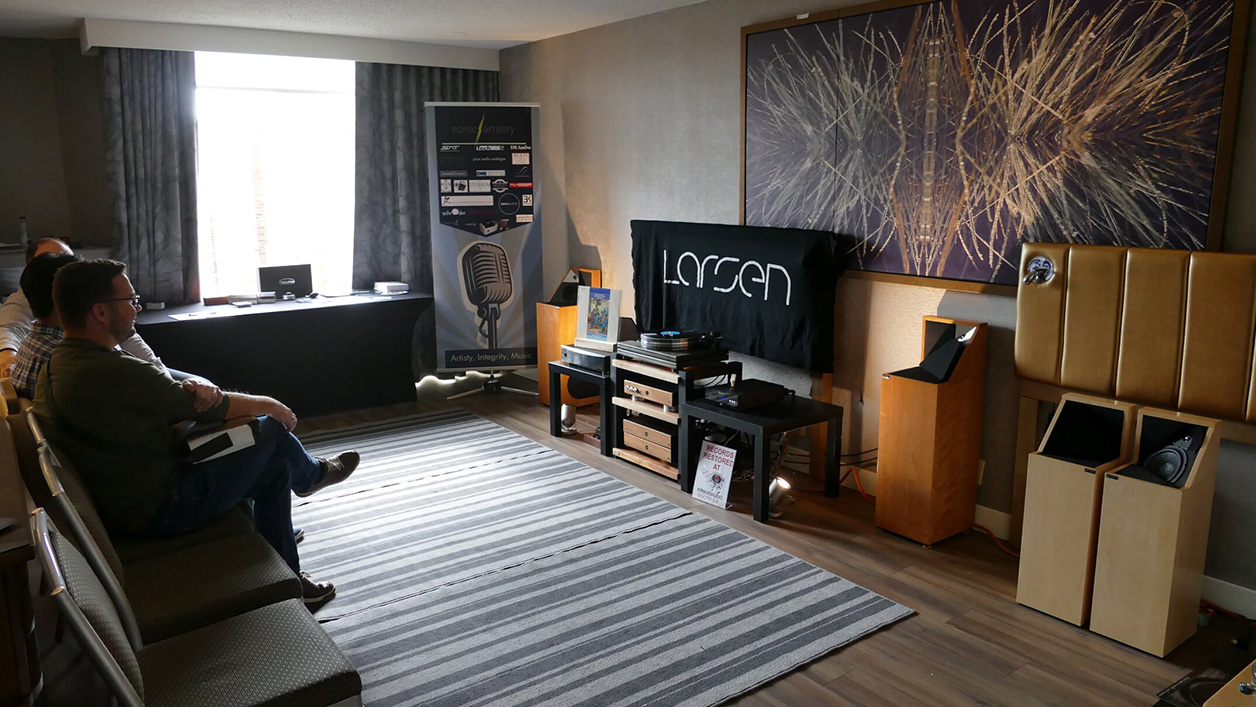 Toronto Home of the Audiophile brought out the $6'400/pr Canadian Goldenear Triton One in a Pass Labs/PS Audio combination featuring the First Watt SIT 3 amplifier. This match made for an excellent disappearing act in the sweet spot which minimized the system and emphasized the music. 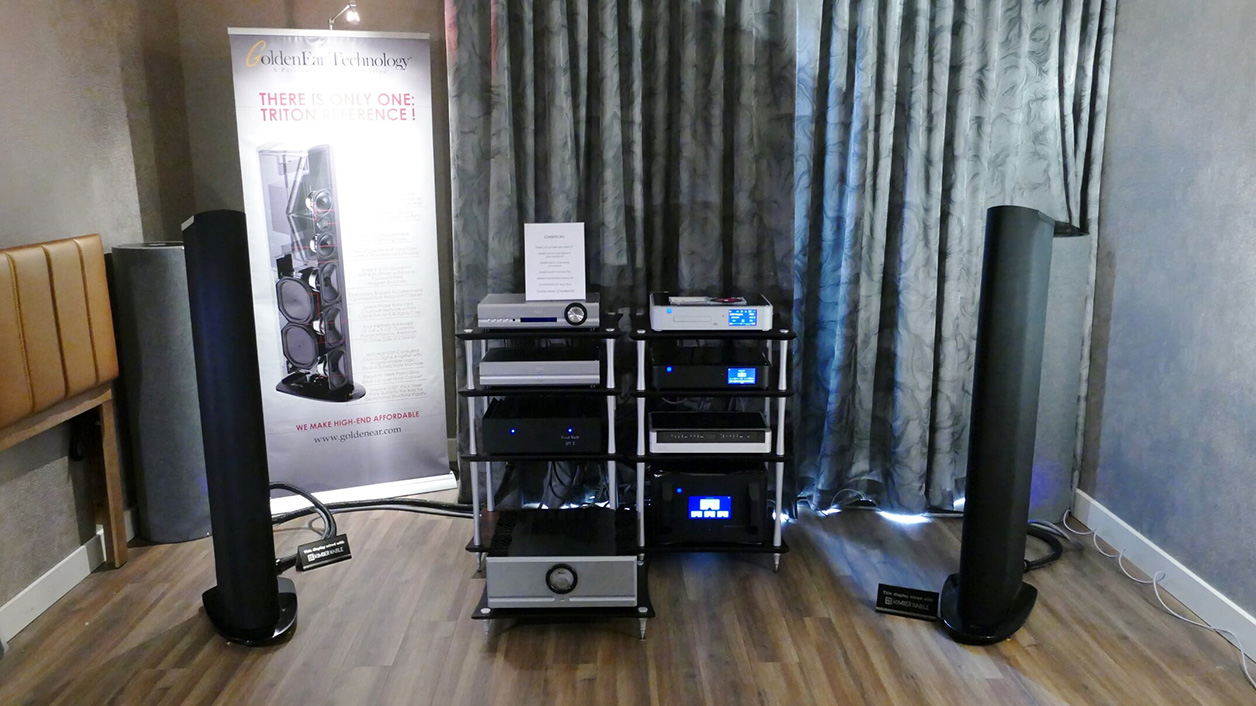 Tri-Cell Enterprises opened up their warehouse to offer both static displays and listening areas to showcase their vast inventory. Their product could be found throughout the show but they also had a few of their own rooms. One was devoted entirely to massive turntables from Transrotor. Solution electronics saw duty in multiple rooms with a Unison Research CD/Goldnote DAC front end and a broad depth of analog ends were in evidence in various locales. Speakers ranged from Estelon to Audiovector. Tri-Cell's Vince Scalzitti and team did masterful work in each demonstration rooms and the sound was unfailingly musical. 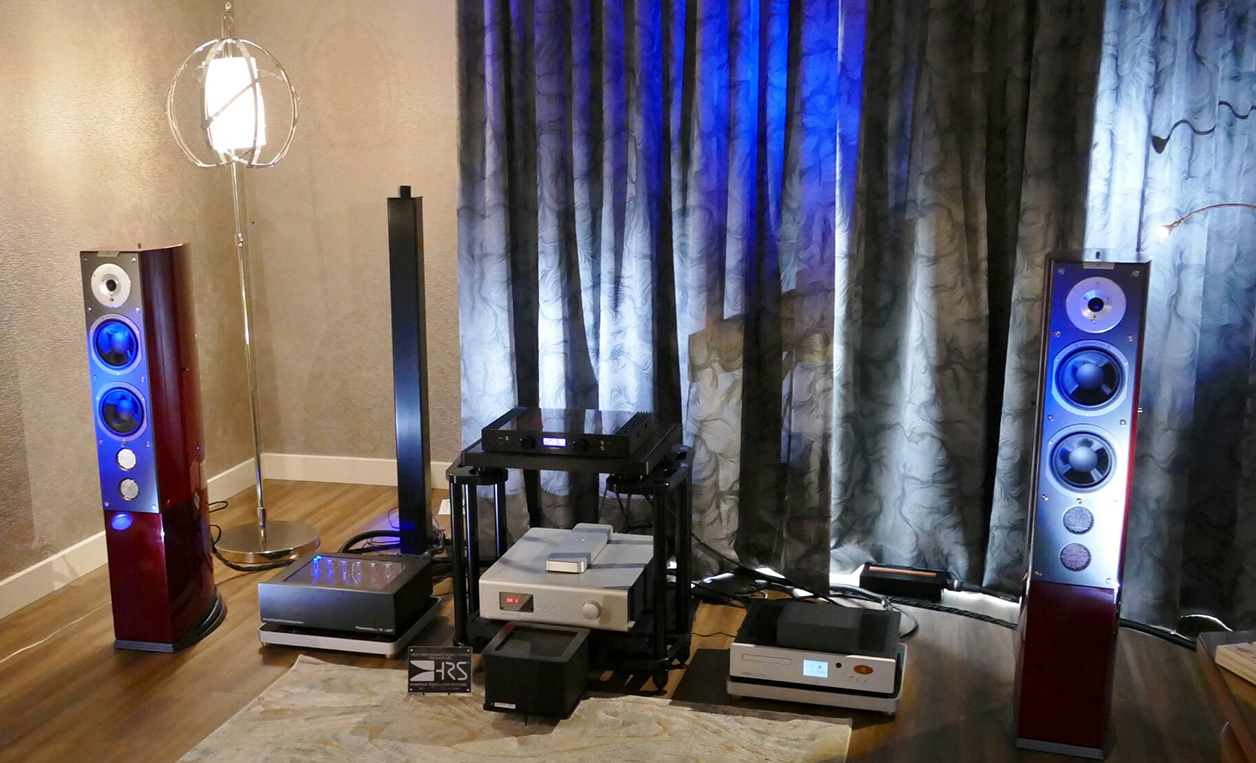 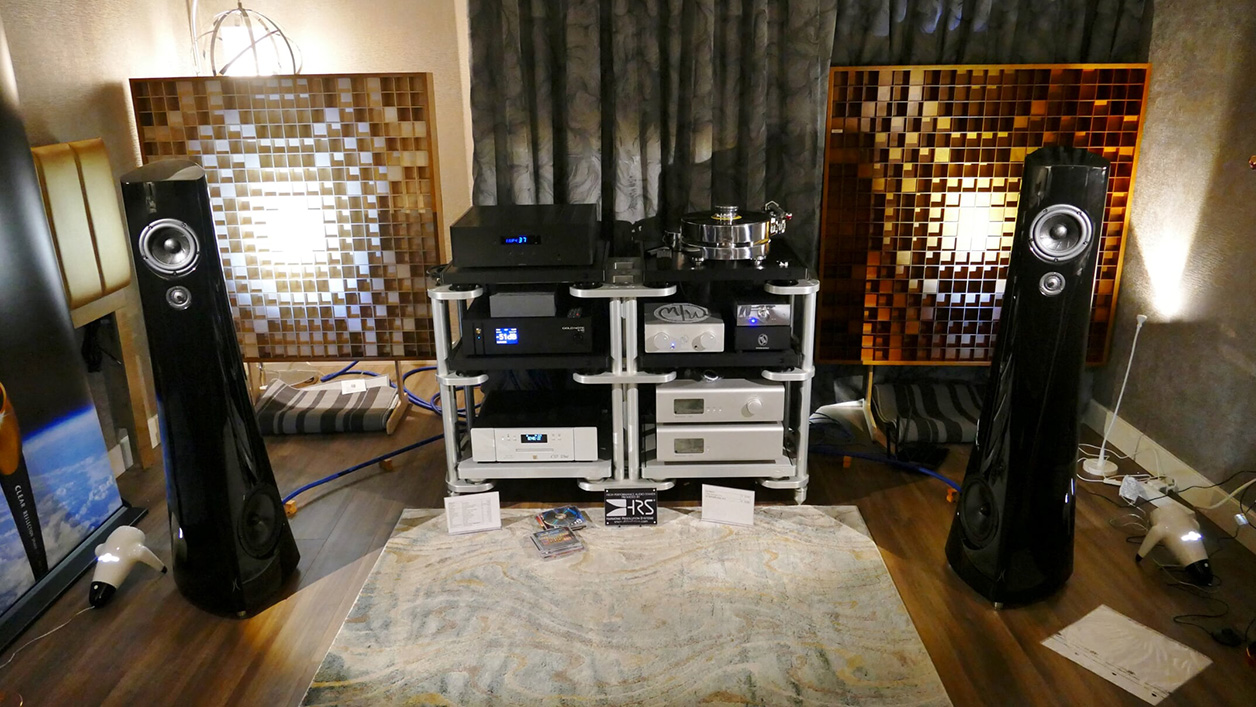 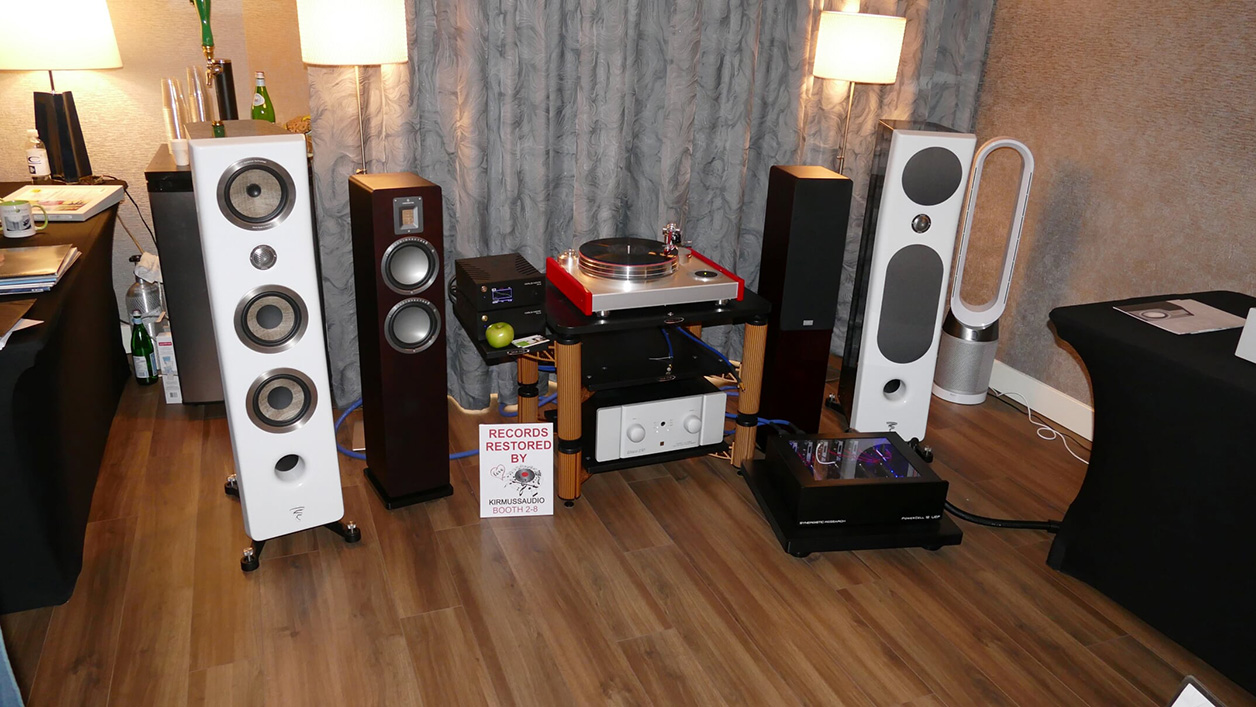 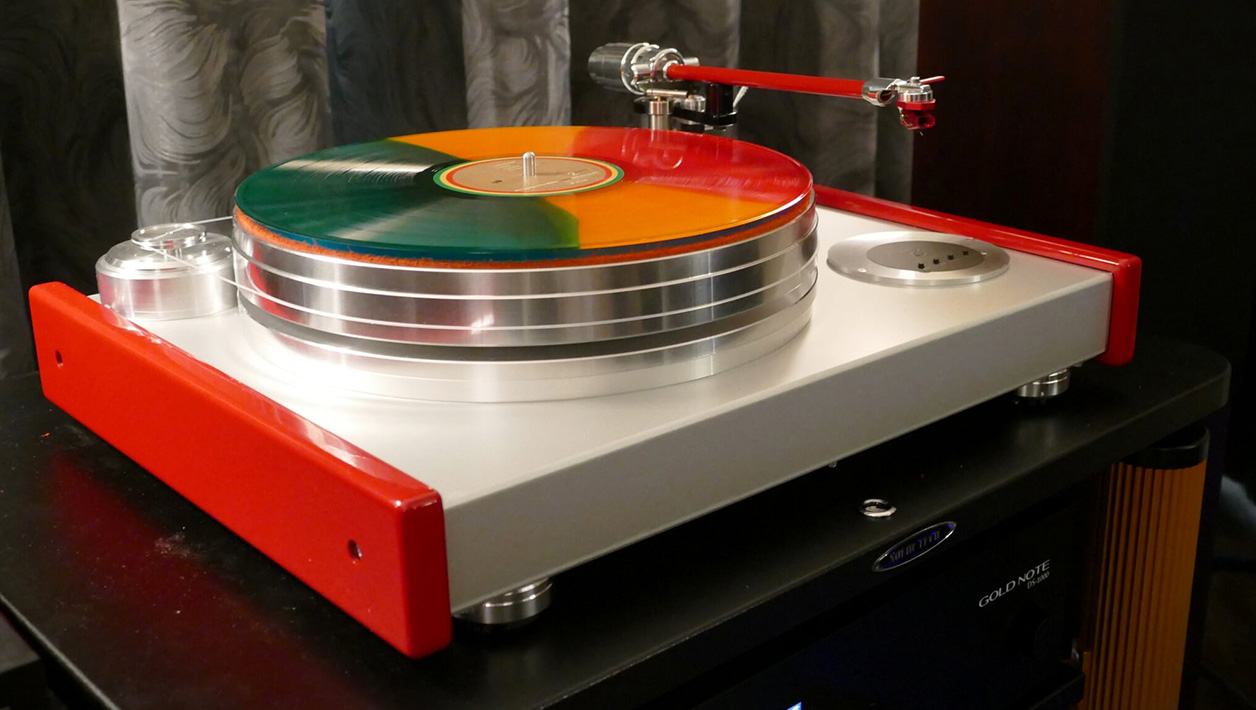 Tri-Art Audio always offers one of the most interesting areas to explore. Their wide range of product is Bamboo clad and visually attractive in a very organic sense. Performance was good and their open baffle design one of the few seen at the Fest. 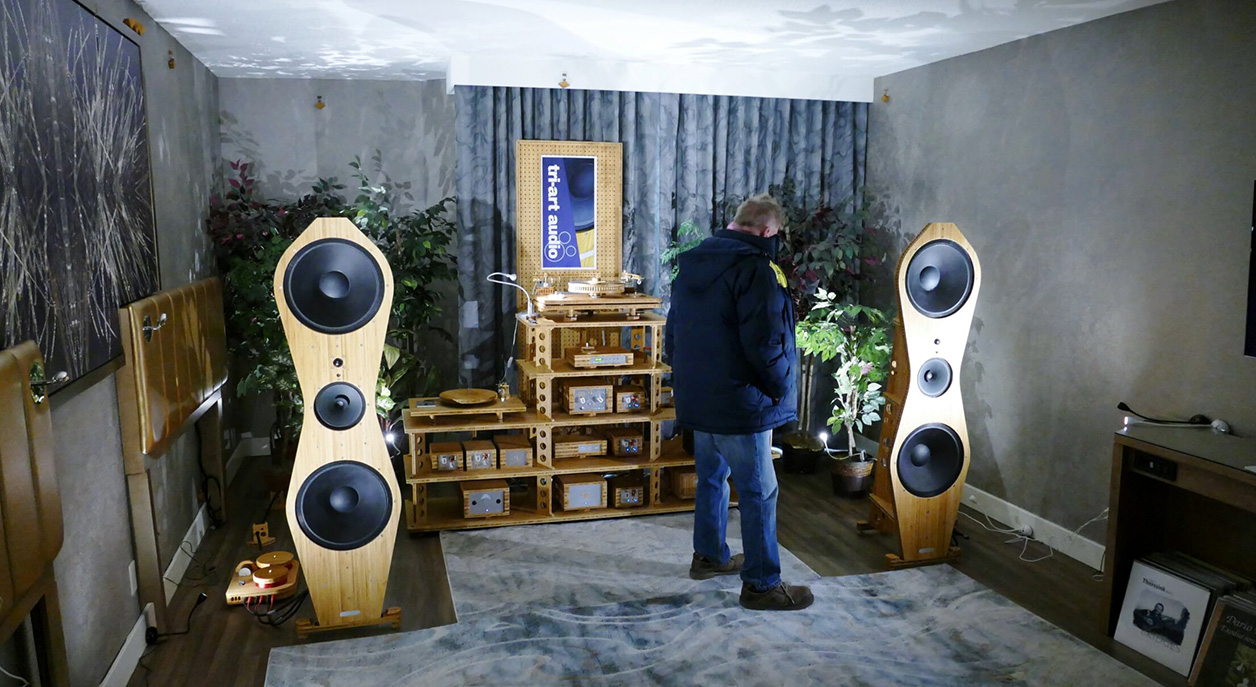 Vinyl Sound brought out the proven Harbeth line coupled with Accuphase and Kuzma. Here was a great place to experience British sound in its traditional analog trappings. 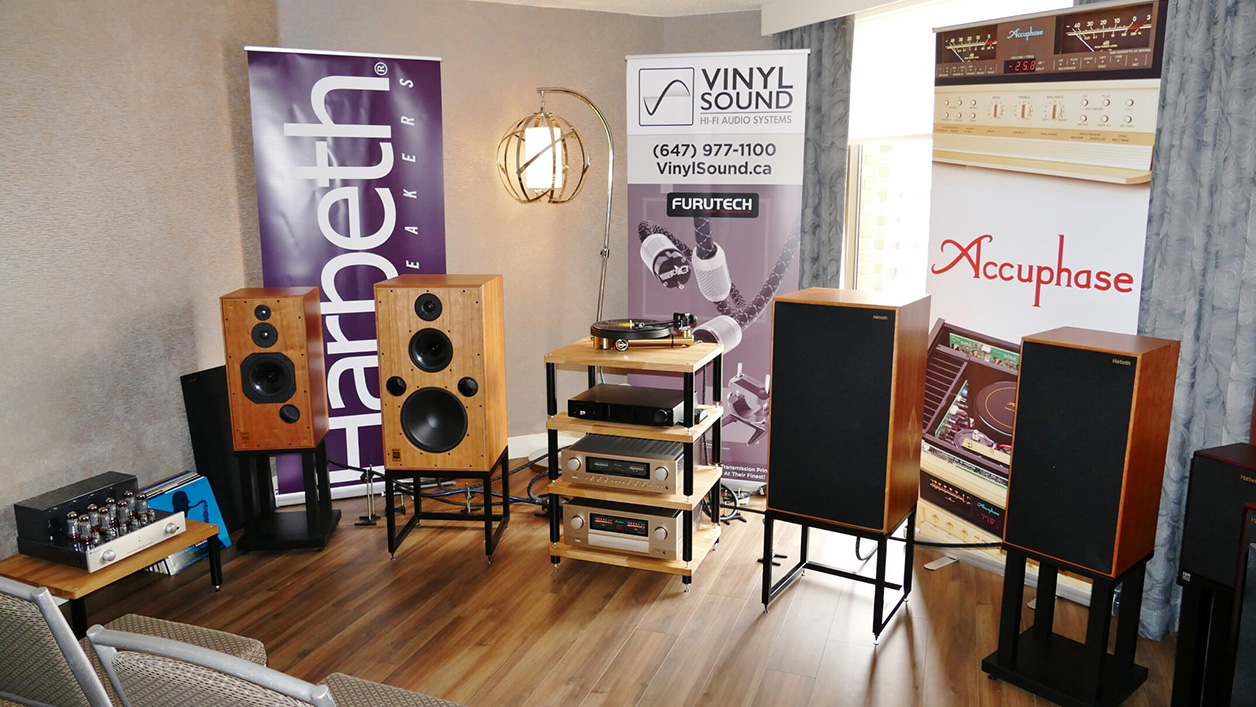 Yamaha played their flagship NS5000 speaker ($15'000/pr US when last I looked) with a combination of new C5000 preamp and matching M5000 amplifier. If Yamaha aimed at warmth, musical weight and engaging nuance, they achieved it. 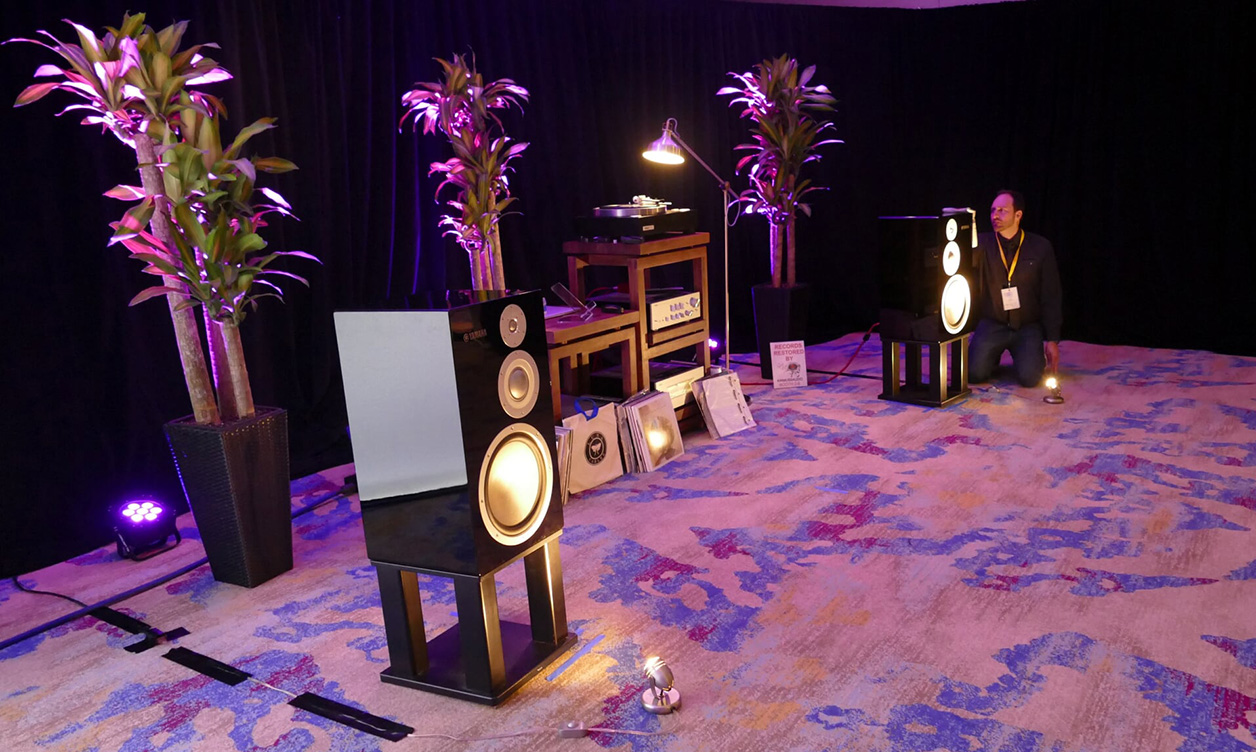 And there you have it, the full Fest glimpsed in fast motion and shorthand, pretty much from A to Z with minor detours. Apologies for short shrift or lack of full detail. If your curiosity has been piqued, dealers and distributors will be happy to fill in the blanks and supply guidance. It's time to wind down. No more scurrying from room to room, notebook in hand, asking questions and furiously taking photos. Instead, I'll sit back and observe the lights dimming and the curtain coming down. We're now at the end of Sunday. The crowds have finally dissipated towards the exits and the weary but happy exhibitors have been left to dismantle and enjoy much deserved rest. It was a good show. The first edition of the Toronto Audio Fest was quite successful and drew in a steady stream of audiophiles, proving that a standalone audio venue is viable in Toronto. It was a noble gamble so kudos to the organizers. Will 2019 be even bigger and better? I'm sure the planning has already started.