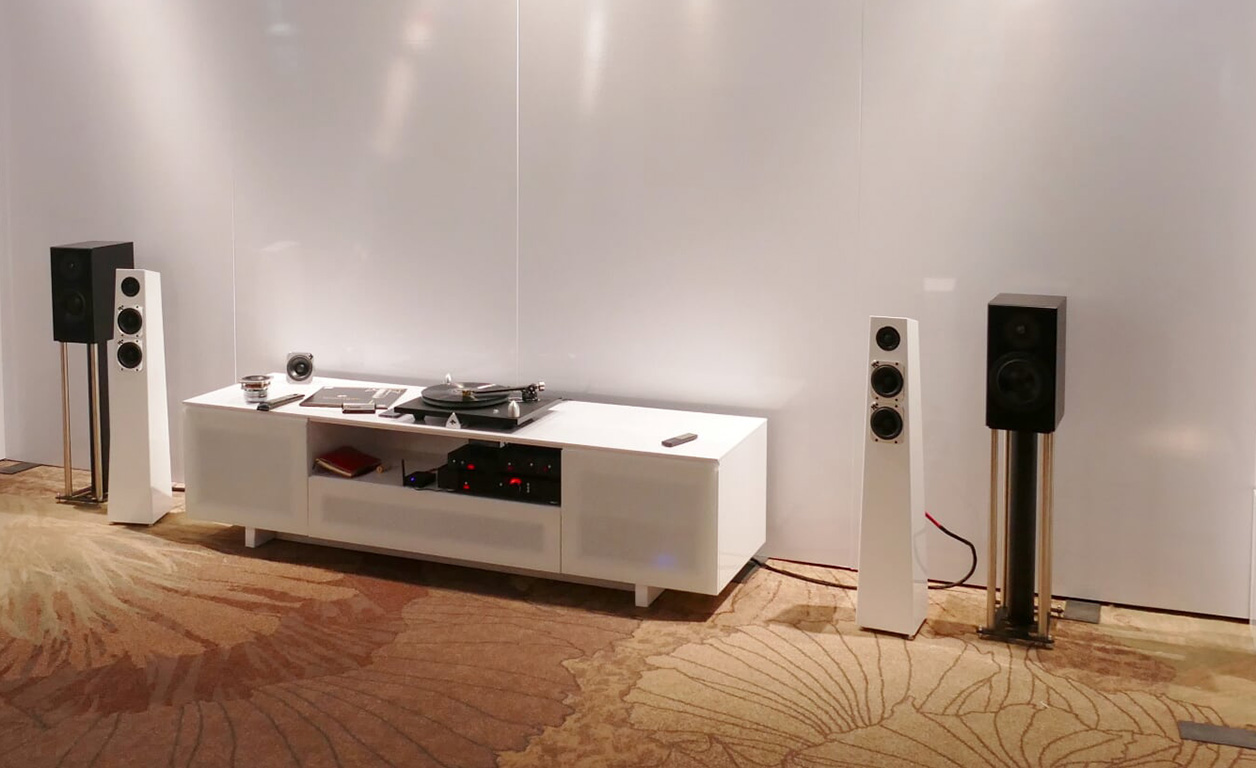 Elac demonstrated their new Navis powered range to good effect. The $6'000/pr towers made large-scale enveloping sound when I walked in while the smaller $3'000 monitors awaited their turn. The system was a superbly done minimalist effort and if matched with the optional Discovery Connect transmitter, would go full wireless to boot.

At the higher end of the amplified scale, Gramophone Audio Distribution served up the very slick Kii Audio modular speakers. The $20'000 model 3 is already a well-reviewed highly regarded monitor sporting onboard connectivity, DSP correction and 6 x 250w power per side. Adding the BXT module adds a total of 16 additional drivers plus 7000 watts to create an awesome powerhouse of a floorstander which still occupies a very small footprint. I believe the number stated $44'000 for the system. Its hallmarks were transparency, responsiveness and authority.

In the passive sector, there was plenty to reward the listener. In the past, small systems used to mark beginner's turf. Well Toto, we're not in Kansas anymore and the wizards have definitely imbued those smaller sizes with Doctor Who Tardis proportions when it comes to sound. They're much bigger acoustically than they are visually. Audio by di Tomasso showed an exceptionally engaging combination of SPL with Lumin streamer into a small pair of PMC. Priced at around $17'500 all in, the system was small in size but absolutely huge sonically, kicking with mass and fervor.

In similar fashion, the Nexus International room had a minimalist pairing of KEF LS50 and Micromega M One M150. The little KEF is an audio media darling for good reason and the Micromega is an accomplished all-in-one with muscle and finesse. While $8'000 for the Micromega could seem steep, it's a 150wpc integrated amp with DAC, streamer, wireless Bluetooth and room equalization stuffed into that tiny case. Musically, this petite combination was big, bold and solid to rival big-rig territory.

Monitor Audio brought in their new little gem, the Platinum-derived Studio. That hit well above its US $1'400/pr sticker. Paired with Rocksan, it was quick and precise with an abundance of detail. It may have been proportioned for comfort but played in earnest. 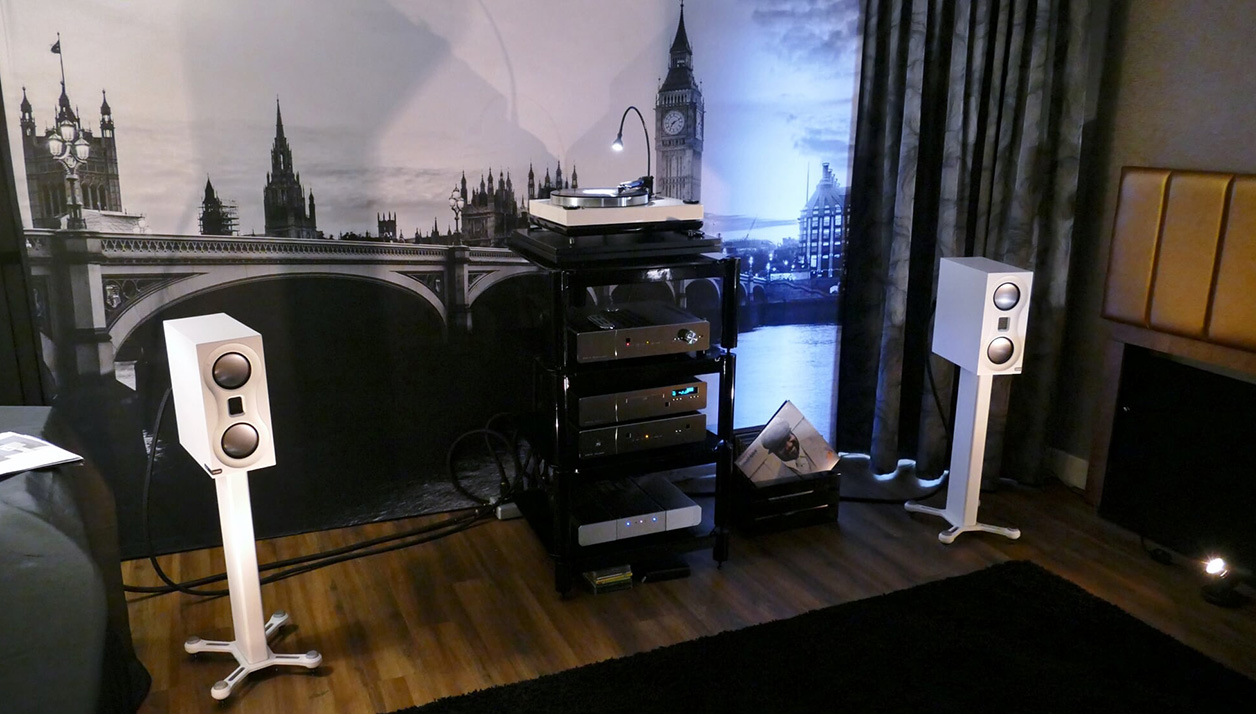 One product line that surprised was ArtistCloner from designer Sylvio Comtois. His $15'995 Rebel Reference speakers matched with his $12'925 Scorpi integrated were incredibly quick, belting out dynamic nuance and power with good warmth and a Cinerama-style soundstage. Count me impressed again.

A fun little number nestled forlorn in the corridors was the Esse Quadro from Italy. With two models at $10'000 and $7'500 respectively, they showed promise and deserved some dedicated space. Possibly a hidden gem?

Time to move beyond easy domesticity to explore the bigger toys. Audio Eden coaxed some very fine music from Mike Hamelin's $100'000 combination of Kharma and Nagra fronted by a quality SME/Dyanvector analog rig delivered revelatory performance. Material I was familiar with was fresh and convincing. Not only was there more information, there was better information.

American Sound of Canada brought in some of their Avantgarde samples. The bigger $50'000 Duo matched the room to perfection, coming off both intimate and effortless. The Zero also got demo time, losing some absolute scale to its bigger brother but with the bonus of less imposing size.

Audio Excellence was in two locations. In the smaller room, a more modest (?) Wilson system acquitted itself quite nicely. In their ballroom setting, you could see a solid wall of almost unending McIntosh greenery with a large listening area devoted to the $186'000 Sonus Faber Aida. Dream scale and pedigree were on full display.

Wynn Audio's static displays had suitable eye candy at a variety of price ranges and for listening, they opted for both regular and ballroom settings. In the smaller area a delightful pair of ca. €40'000 Goldmund played with Karan Acoustics. The sound was top drawer, throwing big scale and power well worth extended visits. In the ball room, high-pedigree sound blossomed from even dearer Karan and Kalista fare and what I originally thought were Tidal speakers. Instead it turned out to be a pair of $43'000/pr Vimberg Tonda, an offshoot of Tidal aiming to pack much of their spectacular sound quality into a less expensive package. Mission accomplished 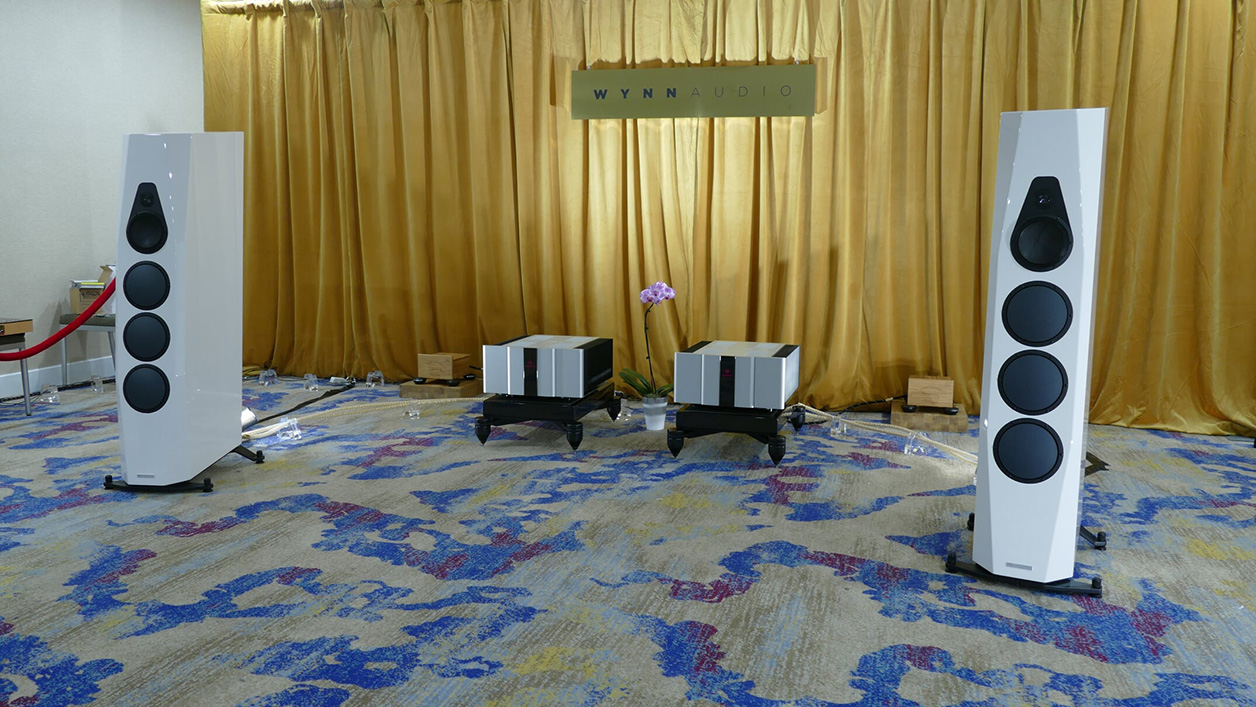