For his platter bearing, Mr. Tien chose a magnetic variant which floats the spindle on a magnetic pillow. There is no uneven spindle strain due to the three motors and any residual motor vibration is absorbed by the non-contact magnetic pillow. The friction-driven aluminum sub-platter propels the lightweight acrylic platter. So we see some innovative ideas at work in the TT3 which is, as we can reveal now, simply the top part of the TT5. 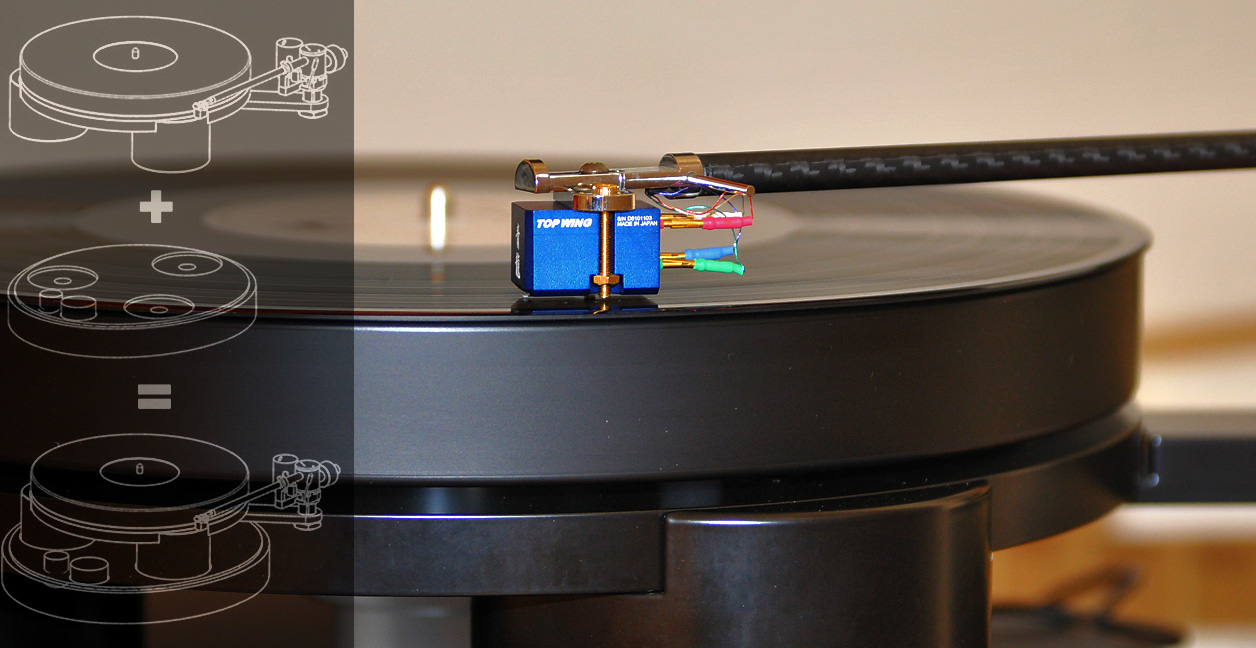 Insert shows how a TT3 converts to a TT5

Next came the tone arm, another bundle of innovation. Called Viroa, Tien Audio offer it in 9", 10" and 12" lengths. Key is again the clever use of magnetics. Counter forces between magnets balance the arm and provide dynamically adaptive anti skating. The arm itself is a unipivot type. Mr. Tien uses a sapphire at the bottom of a cup which stands on the arm's base plate. In the arm's bearing race sits a tungsten steel needle which rests on the sapphire. Such construction alone would be very wobbly and result in just two points of contact: the needle cup and cartridge tip. This would not work. Therefore Mr. Tien again selected magnets. One magnet is located at the left side of the arm bearing housing, the other on the right. These magnets keep the arm in balance and maintain the azimuth of the arm/cartridge combination while forming a magnetic field together with the plate beneath the bearing housing.

When the needle starts to follow the groove from the outside in, all manner of forces act upon it. The magnet interaction damps out these forces with its flux 'viscosity'. Further, the dynamically adaptive magnetic field performs anti-skating duties as the record groove leads the needle toward the center of the record. Where most if not all other anti-skating solutions use a fixed force, Mr. Tien uses a dynamic solution that remains in sync with the gradually increasing force as groove velocity under the needle accelerates to more strongly push the needle's top against the inner groove wall.

We thought that this was one of the most clever most elegant solutions to handle two common mechanical vinyl playback issues. The wand itself is made from carbon fiber and the hookup wire inside it sourced from Van Den Hul's silver litz range. So much for the TT3. But this is a review of the TT5 which makes it not just a cosmetic or refined version of the TT3 but in our view a revolutionary step forward in record player design. The difference between models is the base which gets added to the TT3. This has multiple purposes. It offers additional vibration isolation, is home for the speed selector and above all offers variable torque control over the three motors.

Viroa arm in and out of shipping box

Come again? The TT5 includes the ability to adjust the motor torque working on the sub platter across three stages or strengths. Mr. Tien studied and identified a need to correlate a turntable's torque to the production process of the record being played. Basically there are three procedures to cut master discs. The cutting lathe can engrave the groove in wax, on an acetate lacquer layer of an aluminum disc or engrave it directly to a copper-plated disc know as direct metal mastering.