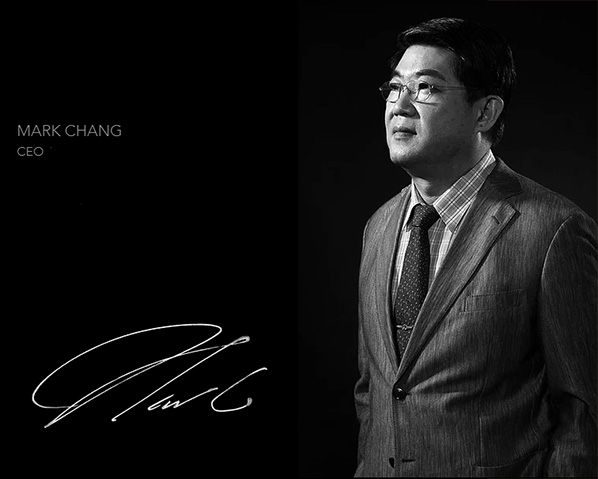 Soundgil was born from the vision of founder Mark Chang, long-time audiophile and Chinese entrepreneur. He wanted to share his passion for music with a new generation of enthusiasts. For this he imagined a system easy to use, with a modern attractive look and capable of such sound that it would earn high-end category membership without hesitation. He imagined it as a first step toward or exposure to high-end audio. The ambition of the Cube then is to be the entry ticket into our world, for a young generation keen on modern technology but without the expertise to assemble a traditional hifi system.

Mark's own standards are informed by an MBL Extreme system with huge woofer towers. His passion for high-end hifi, particularly MBL and its network, introduced him to audio engineer Peter Pu (MBL, Onix) and Korean designer J.K. Kim who also specializes in audio systems. They became the two main engineers in charge of realizing Marc's Cube concept. The system underwent many prototypes and the motherboard in the central unit was developed in competition between two companies whereby an American firm won the contract. The choice of coupling between motherboard and amplifiers, the enclosures and custom drivers each were the focus of undivided attention. That's the genius of the Cube. The implementation is down to precision expertise. Marc supervised the project to align it with his vision and ears

Visually we're talking 4 x 11.6cm³ aluminium cubes with a small 7cm/3" widebander in each. Two cubes containing also the active electronics are welded together, two speaker satellites connect by black umbilicals. Two cable pairs are included, one short if the cubes get stacked, one long to separate the satellites at a max 90cm which is considered their ideal setup. Inside each cube hides another moulded very rigid sealed aluminium chamber to contain the drive unit for a squared or cube-within-a-cube affair which is stuffed to the max with very compact synthetic wool. The central double cube houses two drivers identical to those of the satellites and a very compact electronic card with the receivers and amplifiers. An external power supply feeds the central module. The system delivers 30 watts RMS to each of its four drivers in nominal mode, 50w/4Ω max. This is class D power with 0.03% THD/1w/1kHz and 90dB S/NR for the digital inputs, with IMD at -100dB. 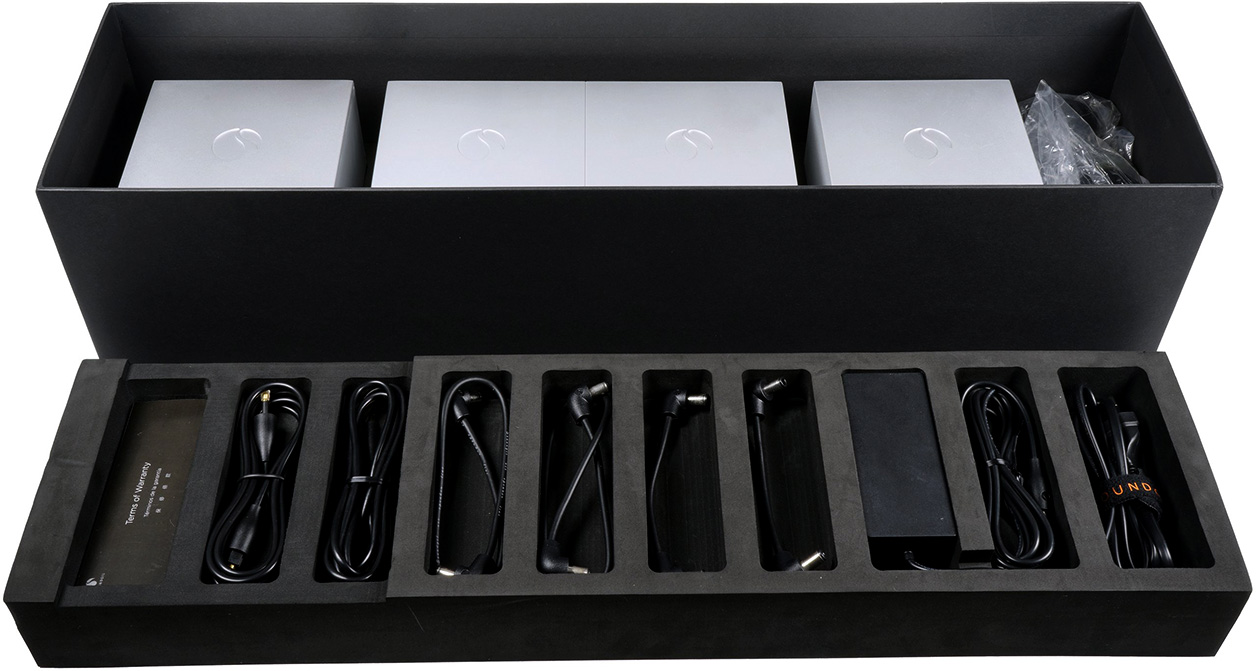 Next three photos by tomshw.de

The concept is tri- rather than stereophonic, with filtering to the 'centre channel' and satellites. Although the secret remains secret, I think that the DSP does a little more to generate a quasi center channel from some form of cross feed since the image stability is indeed curious for basic stereo. But the cook in the DSP kitchen remains mum though Mark Chang did confirm that my thinking included a morsel of truth.

To experience the appeal of an alternate setup, Joël and I attended another Munich demo where Swiss Illusonic processors mapped their own center channel plus compensated for room acoustics. This became a very convincing demo with gains in image density and general dynamics. We moved about the room without a collapse of the soundstage or any of the usual phase shift which undermines tonality. But even without engaging the Swiss processors, the basic soundgil Cube benefits from unusual image stability and sheer size of sonic bubble which emanates from these tiny bricks. Even off-axis the image remains surprisingly stable and the center doesn't move. There was no blurring which we encountered with several systems that meant to pretend they were bigger than they really were. With soundgil we finally do have a system which, though its sound remains relatively compact, completely obliterates any soundbars I'm familiar with especially on depth and height of staging.

The risk with small systems is always that we want them to play louder than physical limits allow. With amplified subwoofers, the subterfuge might end up with a tonal imbalance impossible to correct with placement. But none of that factored here and I was especially struck by the set's tonal accuracy. On this count engineer Peter Pu's sound steering was particularly successful. The soundgil iOS/Android app allows you to adjust the bass level in +1 and +2 boost modes which might be interesting for a small party but I mostly remained in the neutral '0' zone. Similarly, DSP can subtly correct the stereo image depending on setup within your room. After many experiments, I stuck to the neutral setting. The app can access songs on your phone. Further developments on this score are in progress and should add more features over the coming months.

The Cube system can receive 4 types of signals. It is Bluetooth V4.2 compatible with V4.1BLE/ V4.1/ V4.0/ V3.0/ V2.1 + VDR versions. That supports pause, next track, previous track and volume control with the native but also 3rd-party apps. Therefore skipping tracks or play/pause when streaming Qobuz off my iPhone were perfectly handled from the Cube remote. The system supports hands-free phone mode which can be fun but also irritating when your message alerts mix with the music. Bluetooth supports 24bit/48kHz signal up to 10 metres but in practice, 6 metres off a phone is most stable. The second input is wired as S/PDIF over a 3-in-1 hybrid 3.5mm jack which adds Toslink up to 24bit/192kHz plus stereo analog. The last input is a USB thumb drive receiver which supports MP3/ WMA/ APE/ WAV/ FLAC up to 24/48 and 64GB storage max.