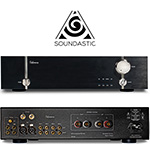 This review first appeared March 2022 on HifiKnights.com. By request of the manufacturer and permission of the author, it is hereby syndicated to reach a broader audience. All images contained in this piece are the property of Marek Dyba or Rethm – Ed.

If you've already heard of Poland's Struss Audio, they've since relaunched as Soundastic. When the news came of Mr. Struss' passing as one of our most famous amplifier designers with great knowledge and experience, it seemed that the days of his brand were numbered. And they were; but only because the shareholders changed its name. The current lineup continues the Struss tradition of three integrated amplifiers: the DM-250, Ultimate and top-of-the-range Reference. On the outside it's very similar to the DM250 I reviewed some time ago. It just abandoned the interesting red wave motif on the front. Now the new Reference looks almost identical to the Struss Ultimate. From their fronts it's tough to see differences apart from model name and old logo. Soundastic avoid a logo altogether. Differences between precursor and successor are clearer on the rear. The new Reference lacks the pre-out/power-in terminals to instead offers phono not just for MM but also MC cartridges plus more line inputs. 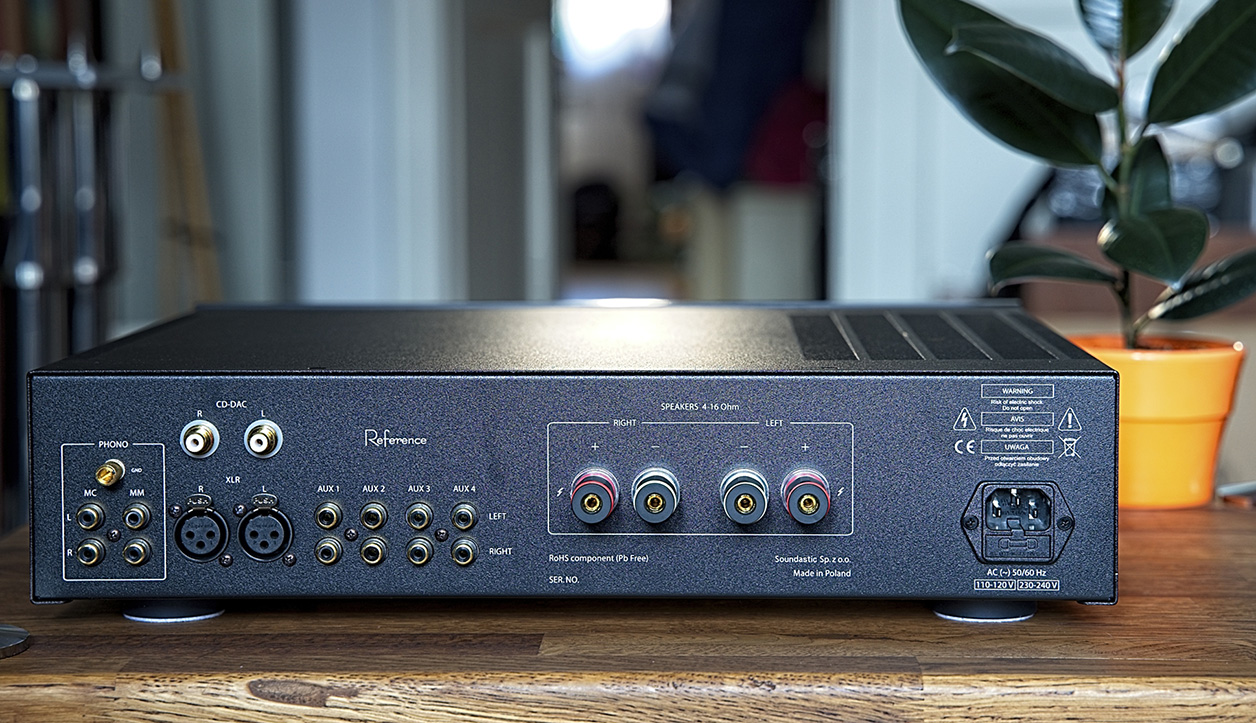 The deck has kept its compact 430x95x358mm 16kg case. For its 140wpc into 8Ω—260wpc into 4Ω—that size doesn't seem much. These power figures are almost the same as for the DM-250. The Reference struck me as being well built and finished. Although beauty is relative, I believe that those who prefer elegance from modest means will agree that the housing designer managed nicely. The only dressy elements on the otherwise plain black front are two vertical silver strips and three highly polished controls. Let's add a possibly overly bright blue LED indicating selected input and a red one on the volume control knob to indicate its position. Now we have the complete frontal picture of a modest yet still elegant eye-pleasing machine.

The Soundastic Reference is solid state in Class AB. Unlike for the DM250, I found no confirmation on how many watts run in Class A. I already mentioned solid build and finish. Let's add that the controls are limited to a medium-sized volume knob and two rotary switches, one a power mains, the other an input selector. Behind the largest knob sits a motor-driven precision Blue Velvet Alps pot playing the role of passive preamplifier. The lack of power-in/pre-out is made up for with additional line inputs to keep the number of total rear sockets unchanged. So we have six inputs, four with gold-plated Japanese Jalco RCA, one marked DAC/CD with upgraded RCA, another with Amphenol XLR. According to Soundastic, the different RCA input has lower capacitance for better sound. It may also turn out useful due to the larger spacing. 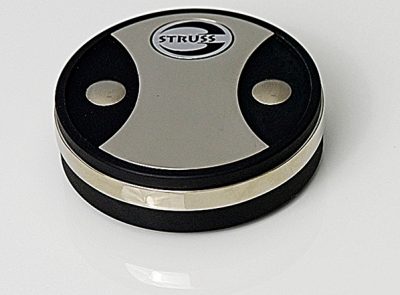 That's not the end of featurization. Already the predecessor offered built-in MM phono. Today's goes one step further by also offering MC. That phono board is based on discrete parts. The impedance for MM follows the 47kΩ standard. MC is set at 100Ω. Users can neither change input impedance nor gain. The fixed sensitivity of the MC input is 0.2mV and 3mV for MM. That works with a wide range of cartridges.

Next come solid speaker terminals and the IEC power inlet with spare fuse holder. The manual recommends speakers with a minimum 4Ω impedance. The Soundastic Reference is a dual-mono design in a non-magnetic alloy case for effective isolation from external HF interference. The front panel is made of aviation-grade aluminum alloy. The power supply features dual 500VA toroidal transformers of low loss, high inductance, small size and very low magnetic dispersion. They install on anti-vibration bases secured by special epoxy while an extra 3mm copper sheet on the chassis eliminates interference with the output transistors. Those mount to 15mm aluminium to eliminate potential residual trafo vibrations.

To use a relatively small chassis, the designers developed effective convection cooling. There's also a new soft-start circuit with AC filter to eliminate turn-on transients and their detrimental effect on the lifetime of their 48'000μF Nippon ChemiCon Elcos. The output stage is based on Soundastic's patent RP N°176514¹. There are no signal-path capacitors. The symmetrical driver stage uses Jfets, the current buffer two pairs of International Rectifier Mosfets per channel so eight in total. A protection system safeguards against a temporary short of the speaker outputs/cables and any DC offset. The round aluminum remote control we saw already with the DM250. It weighs 0.37kg and features a USB-rechargeable battery. The concise manual is in Polish, English, German and French.
_______________________________

¹ Its abstract references a low-frequency bridge power amplifier without distortion of the supply voltage, operating in class AB or B and consisting of two push-pull amplifiers powered by DC voltage in a bridge circuit, the outputs of which are connected to the load resistance through voltage-to-current converters turned on the diagonal of the bridge and covered by feedback loops separate for the variable component. For the variable component, the feedback loops create resistance connections of the load with two symmetrical dividers…