An Innuos Statement handled storage/transport duties, then a LampizatOr Pacific DAC passed analog signal to a Trilogy 915R/995R pre/power set. From there Boenicke S3 speaker cable connected either to Crescendo Duo or Boenicke Audio W11 SE+ speakers. Interconnects were Boenicke Audio IC3 CG and XLRs which I DIY'd. All key hardware powered from a Boenicke Audio Power Gate distributor with three captive M2 cords and two LessLoss C-MARC. The USB chain included one Mercury3.0 USB cable. External LessLoss Firewall for Loudspeakers modules complemented both speaker sets, a Fidelizer EtherStream shook hands between my Linksys WRT160N router and Innuos Statement server. ISOL-8's Prometheus PSU connected to the router and network switch. As per usual with speakers, finding their optimal position was my first order of business. Separated by at least 2.5m with at least 75cm to the sidewalls was Edijs' recommendation. My fairly small room allowed me to meet these criteria then increase the distance to the front wall by about 45cm extra for higher imaging depth. But that was it. Upon positioning both as described and crossing a fair bit behind my seat, they were ready for action. I had no class D at my disposal but Trilogy 995R monos biased into class A/AB respectively push 100/350wpc into 4Ω loads and that made the Crescendo Duo very happy. 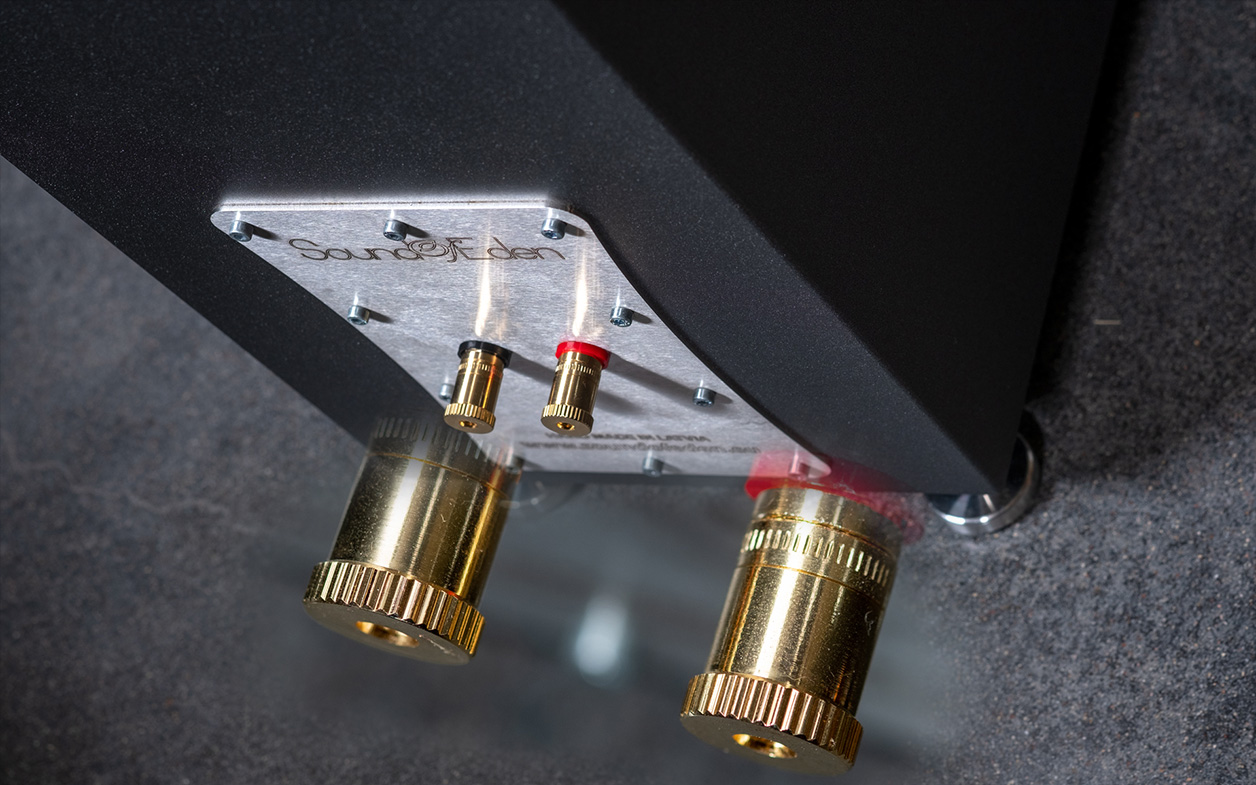 Although class AB bias provided extra horsepower for greater bass slam and control, sonic trade-offs elsewhere were too significant so two days into my auditions, class A ruled again. Perhaps in rooms twice as large I'd want extra power but here that was of no importance. I enjoy my system a fair bit more when its two monos run properly hot. Two stiff 6" cones and twin rear ovals predicted effortless loudness far beyond my comfort zone and I had just the plan to track such assumptions. Dual passive membranes coupled to the front wall promised clean tectonic bass and similar speakers I've auditioned in recent years really benefited from the 6dB boost that provides. With the Crescendo Duo, bass slam became monstrous indeed but on quantity grew so massive that I had to capitulate. I can't know what would happen in a roomier space preferably with higher ceilings but the takeaway was obvious. Placed a good meter from my front wall was far better than at arm's length.

Here it's fair to elaborate what bass slam means to me. Think of an iron grasp that hits very hard to be felt in the chest. As such this range emphasizes power, speed, ease, precision and focus to steal some points from roundness, thickness, textures and softness. In this context the Crescendo Duo packed a properly powerful punch but its fat content was higher than similarly augmented speakers had been. Their kind put more hours into cardio than weightlifting while today's subject divided its gym time more equally between these disciplines. It was agile but very muscular at the same time. It made for a perfect personal reminder that familiar cone materials, transducer types and topologies needn't match my expectations. Given today's weaponry I was ready for a quick lean reading with stout energetic bass but luckily hadn't put any real money on any such bets. The Latvians had their bass nicely developed and gutsy indeed but remained pleasantly hefty above that range to portray vivid majestic landscapes with nicely rounded images. Nothing about this was ethereal, anemic or itchy. The general sonic profile stuck me as geared for ease, tangibility and substance to keep nervousness at bay. That should make many casual listeners very happy. 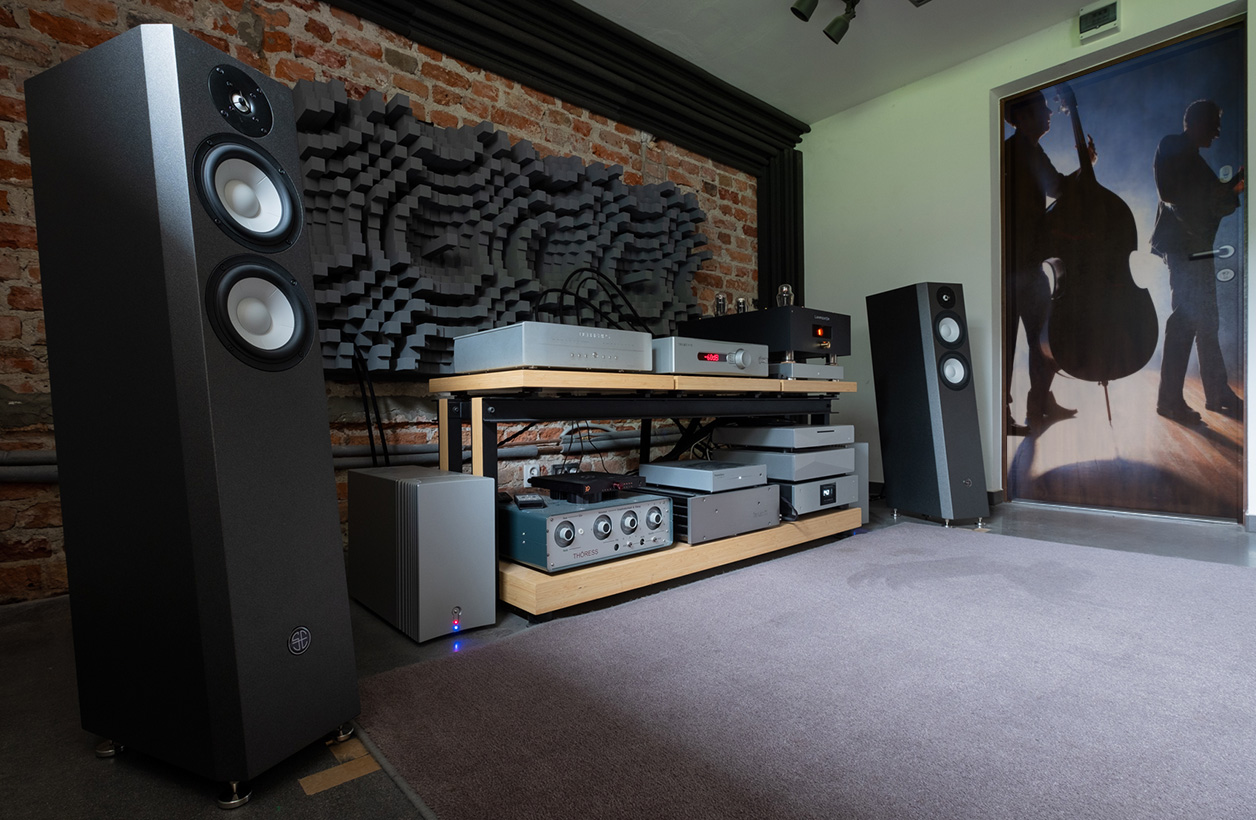 Although this tuning pleases the music instead of dissecting it, it also plays properly articulate, open, informative and fresh. Most ported boxes can't maintain this exact ratio but this one could. It wasn't veiled, fuzzy or diluted either and I really appreciate fully grounded speakers which know how to stay well clear of that area. I'd describe today's psych profile as groomed for fun. It's nicely balanced and generous enough in the sweet spot to accommodate more than one listener. Now Boenicke Audio's W11 SE+ had to step in to confirm these findings and determine where the Crescendo Duo's place truly was. The Swiss naturally felt noticeably more light-footed if not ethereal at first but also quicker and tailored for greater insight and sensibly harder yet smaller bass. Although higher resolution was evident, the Latvian didn't emerge as unclear and stuffy by contrast. After each swap it wasn't inferior just significantly different to draw my attention to qualities beyond my daily driver's priority list. Here the Crescendo Duo emerged as more earthy, grounded, dark and massive and in that sense grand. That's what happens upon providing well-controlled density and commensurably tall images.