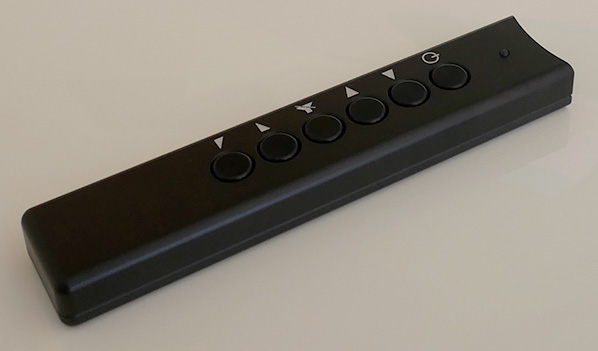 SQ. For once it's not shorthand for sound quality but status quo. Before discussing sound, explaining setup is always sensible. When I'd reviewed Aavik's three converters priced from €6-20K last year, they'd brought with them a firm Danish dentistry notice. Particularly upstairs the Denafrips Terminator felt long in the tooth relative to their noticeably superior low-level resolution. This set the usual wheels in motion. What eventually pulled Mr. T's tooth was iFi's flagship, WiFi/network chip removed by their Blighty tech to eliminate its constant microwave radiation. Running that in pure transistor mode but resampling all PCM to 1'024 DSD has since elevated my small system on both SQ scores.

Downstairs a Terminator Plus still reclocked a Soundaware D300Ref USB bridge. Given Pasithea's engineered ability to dig unusually deep into the noise floor and unearth micro detail otherwise masked, I was curious. Would the Dutch goddess show my big system's digital a set of heels just as the small Brit had done upstairs to the original Terminator with upgraded processor board? When Cees announced shipment of my sample, my beard was all sorted. Considering pre-arrival SQ, some readers had gently suggested that my big digital no longer met the mark of Mola Mola's Tambaqui for example. With that demanding crowd, Pasithea could perhaps temporarily reset my status?

As befits a young modern goddess, Pasithea arrived well sorted in heavy protection then emerged 3/4th wide with a folded sheet-metal top. Lean'n'mean as though of very low body fat after religiously attending thrice-weekly spin classes, this wasn't Denafrips on extreme build. Going Dutch here isn't about opulence or excess. Yet amend this for the chunky 6-button FMJ wand. It plays the heavyweight league. Since that's what you'll fondle whilst Pasithea looks on coolly from the rack, it's a fine allocation of resources. 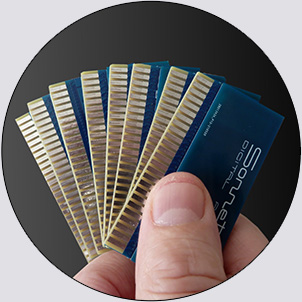 That Pasithea wore Prada for high heels—or played with a full hand of aces—came clear quickly. Genuinely higher resolution not faux simulation invariably telegraphs as a softer finer-boned gestalt. It only makes sense. What do the most minute of recorded data consist of? Higher harmonic nuance. Micro cues of recorded ambiance. Dynamic nano expression. Lesser resolution doesn't swallow up notes. Provided speakers have full bandwidth at the extremes, all sung, played or drummed tones remain audible. What falls away are the finest of reflective trails around/behind images; the full overtone signature of individual timbres; the minute inflective gradations of dynamic emphasis.

Whenever images embed in more audible space, there's more softness and elasticity. I always think of the attic in the 6-flat house I grew up in. Each tenant had a small locked chicken-wire area for storage. Exposed wood beams and the undersides of the red roof shingles were visible. Whenever sun light fell in just so through small slanted windows, I saw endless dust motes. Those dancing dots rendered the air and its movement visible. Good recordings contain equivalent 'dots'. They make space more audible by how even tiny reflections suggest venue boundaries.

Now think of the sonic tapestry as having a thread count. Imagine what complex outlines you could knot into a carpet if instead of 50 knots per inch you had 300. It's no longer about rough approximate edges. It's about far finer delineations for real gains in finesse and nuance. In similar fashion, rough dynamic demarcations tease out finer. Greater movement or life in the amplitude domain exhibits more ripples and contours. The result is more fluid so less choppy. And what's fluid if not edgy? Combine the effects of more intelligible recorded reverb with livelier dynamic inflections. Appropriate descriptors again are more soft, smooth, gentle, buoyant; less rigid, stiff and concrete. It's the first pretty much instantaneous impression of difference I heard when I substituted our Terminator Plus with Pasithea. What caused it? According to my view on the subject, demonstrably higher resolution!

I hear instant protests. "Yeah but…"

"… surely tone and density suffered?" If tone means maximally differentiated/modulated timbres, au contraire. As overtones ascend ever higher, their percentile strength diminishes to homeopathic doses. Higher resolution simply digs deeper into those upper harmonics to tease out timbres into greater individuality. But if your lexicon equates tone with extra density, that wasn't the case. Pasithea was more light-footed and fleet, Terminator+ more massive, thick and dark. Whether you call Pasithea leaner, Denafrips just right; Sonnet spot on or Terminator too bulked-out or fat… that's up for grabs. It's not only relative to overall system tuning. It's about the personal taste responsible for the tuning. In my book, T+'s darker heavier density was clearly less clear. I felt as though listening from a greater distance. Focus weakened and generalized. "Yeah but"… didn't I just call Pasithea softer? Her particular softness coexisted with hearing more, more clearly. It didn't mean softer focus. That's a vital distinction. Words easily lose the plot. Pasithea was texturally softer yet of higher overall focus or contrast ratio. Being more illuminated also meant that her reading felt quickened. In that sense, density did step down or back. Tone colors meanwhile were more intense. That included a very special virtue we'll still get to. 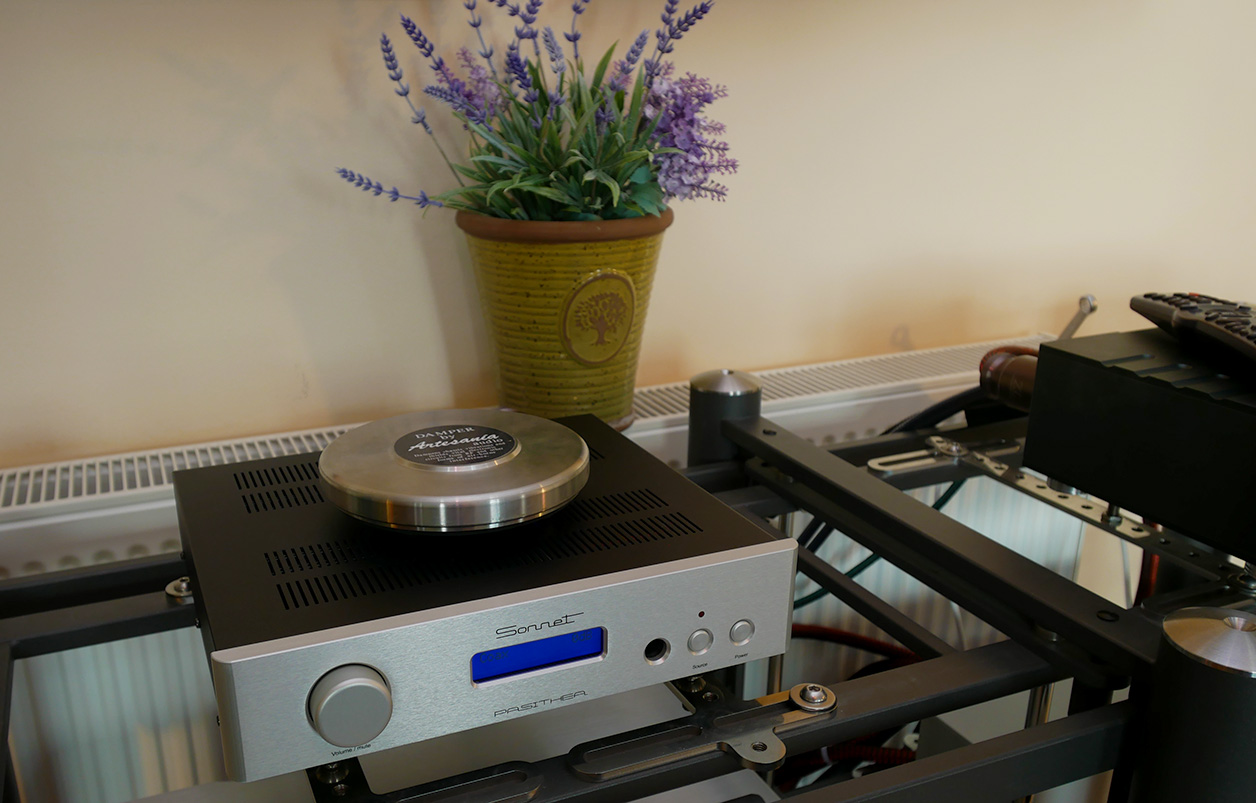 Artesanía damper plate to add weight against heavy power cord but set up on four steel spheres to float above the chassis perforations for proper ventilation.

First, an oft misunderstood quality. In many a reader's mind, separation is like divorce. Things fall apart. What should be whole fractures into pieces. Hello vivisection. The only ones to win are solicitors in case of divorce; and recording engineers in matters hifi. That's because they're paid to anal-yze any mix down to its bones. They're tasked to adjust/correct each controllable parameter so it conforms to the artistic concept and vision. That's the polar opposite of what superior separation actually does. With it in place, things don't fall apart. They stand side by side; as equals. Each takes up its own place without crowding or obscuring any other. It's co-existence without competition. There are no superior or inferior, no more or less important parts. The triangle is as vital and present as the lead singer. It's when a hifi's separation powers are insufficient that parts of the whole subtract from our attention. Now they become secondary, tertiary or even less. That's when things fall away. They diminish in more obscure areas of the soundstage with less acuity or intelligibility. They drown in faux warmth or suffocate in manufactured density. 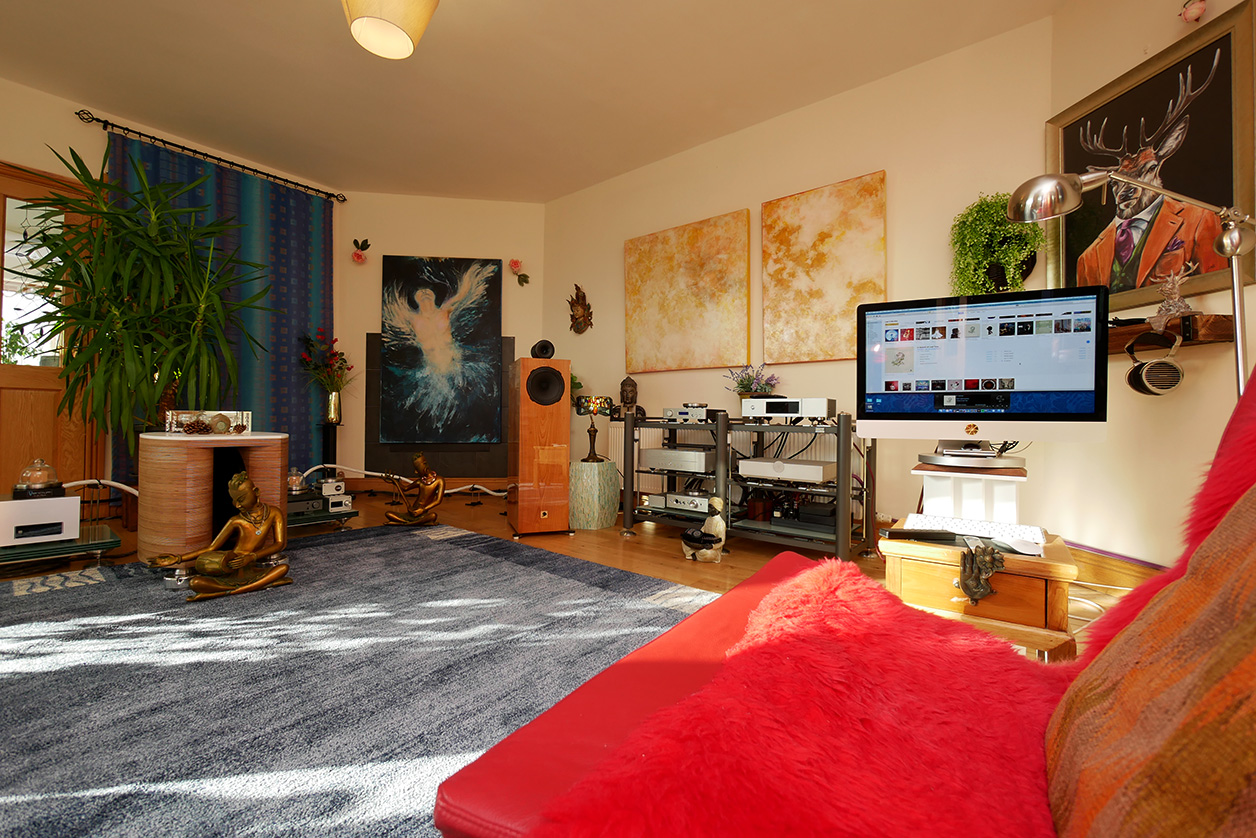 On said score, Pasithea's magnification powers were magnificent and fully satisfying. Complex mixes displayed like a Julian Fellowes period drama. A castle's downstairs staff and upstairs aristocats line up outside to greet visiting VIPs. All are dressed their best. All stand next to each other from kitchen helper to footman to personal valet to Lord and Lady of the manor. For that brief blessed occasion, all are on equal footing and in full view. Then the caste/castle system reasserts itself; if we're Sir Julian Fellowes. If we're Pasithea, aristocracy, imperialism and colonialism have vanished. Now everyone counts the same. That makes serving up really complicated massively paralleled fare great fun to dial up detail density. There's no jostling for position, no effort involved to see the entire lineup and comprehend the intricate dialogue between them all. That's higher resolution on deck. That's superior separation power at work. It's not about dissecting things. It's about leaving nothing behind. It's about making all of it count to be equally obvious. It's a higher take on whole.