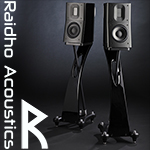 Next level. End game. Bleeding edge. The abyss. It's pop lingo to signify extremist performance. Well, not the last. That's simply what your wallet could fall into should you accept this mission. Today we do. Just how brilliant can a compact monitor get when we throw all cautionary coin to the wind? Vimberg have their Amea, Mårten Design the Parker Duo. Børresen beat the investment lot with their latest M1 flagship monitor. That takes €100K wallet pain to the bottom of the Mariana trench. Silver and 3D-printed zirconium simply cost beaucoup when used in such quantities. But if we don't dive so deep nor shop at Focal, Sonus faber, Magico or Stenheim, Wilson Benesch or Wilson, there's still Raidho's TD1.2. Unlike the rearward passive radiators of my first two name drops, Raidho's raddest stand-mount doesn't chase max bass. It happily leaves such contrarious stunts to others and instead calls 45Hz-50kHz sufficient. Know thyself [Hamlet, final act]. The model's TD is short for tantalum and diamond. The mid/woofer core is aluminum surfaced in ceramic. It's Raidho's Ceramix¹ platform. For the TD models, sputtering deposition first etches an outer tantalum layer into the ceramic layer then particle bombardment grows a final 1.5-carat nano coat of synthetic diamond. The latter's adherence to tantalum allows for higher plasma intensity during the sputtering process. This apparently increases the percentage of diamond to carbon relative to hardness gains so the first breakup mode pushes out to 20kHz. A titanium voice coil surrounded by powerful neodymium magnets becomes the motor. The tweeter of course is Raidho's signature planar quasi ribbon set in a shallow waveguide. At 20mg and 11 microns thick, it's ultra light so super responsive. Unlike a true ribbon, it has separate long voice-coil traces to not be reliant on a transformer to step up a virtual dead short into an impedance your amp can drive. Its first breakup mode is said to be beyond 80kHz so superior to a beryllium even diamond dome.

Kirk Midtskog's earlier review for The Abso!ute Sound unpacked how Benno Baun Meldgaard overhauled the D1.1 designed by Michael Børresen. He revisited the enclosure innards for superior airflow, the xover for better integration of phase, impulse response and impedance linearity. The 115mm/6.1" mid/woofer grew a new 1.1 Tesla underhung magnet system believed to be one the most powerful such motors extant; and a different shape to avoid back-cone reflections. The tweeter upgraded for a claimed further 35% reduction of already very low distortion. Load sensitivity increased from 83dB to 87dB. Same-looking friends with all new bennofits.
___________________________________

¹ "The Raidho Ceramix cone is a composite of aluminum oxide/metal where two 150-micron skins of aluminum oxide bond to a 100-micron aluminium core. The Al²O³ layer—aka alumina ceramic or corundum which also shows up as synthetic ruby and sapphire—forms in a 60-hour plasma process whereby high voltages/currents create a high temperature environment to gradually grow the oxide layer atop the aluminum core." It's why Ceramix diaphragms without additional surfacing look white to distinguish them at a glance from the gray tantalum then still darker diamond versions.

Today's review came about when in the wake of my Raidho X1t gig, the factory's Morten followed its crumbs with a Scansonic MB1 B offer. "I'd love to; or go mad and for a TD1.2 though I imagine those to be in very short supply. Could I request a veneered sample on the MB? That would photograph real well in our décor." "Well… you can but we have none in stock at the moment. Could take two months. On the other hand, I do have a TD1.2 in red which I could ship right away. Up to you." This was followed by Loki's rune; what today we call the demonic smiley face. Much scratching of gonads and brow furrowing followed. But needs must. So here's my Norse triptych in the making. Part III already has its preview. It's a basic good-better-best survey of three 2-way compacts from the house of Dantax in Northern Denmark's Pandrup. The earlier map pin marked the spot.

The 45° vanes set inside the port mouth of the aluminium back bone 'cut' air turbulence to avoid chuffing during high-output sessions.

The TD1.2 is their Oscar Wilde proposition. He was after all a man of simple tastes always satisfied by the best. His full name was Oscar Fingal O'Flahertie Wills Wilde. Irish to the bone. It's only fitting that I do the honors on the same island. He also wrote that experience is one thing we can't get for nothing; and that he could resist everything but temptation. Like the man said! As another man said about the TD1.2—that would be Roy Gregory in his review for Hi-Fi +—"Raidho's latest two-way is the most evenly balanced small speaker they've yet produced, adding convincing and beautifully judged body and weight to the marque's traditional strengths of transparency, speed and clarity." For more Raidho history and how Dantax resurrected the brand from receivership, Roy also has this. 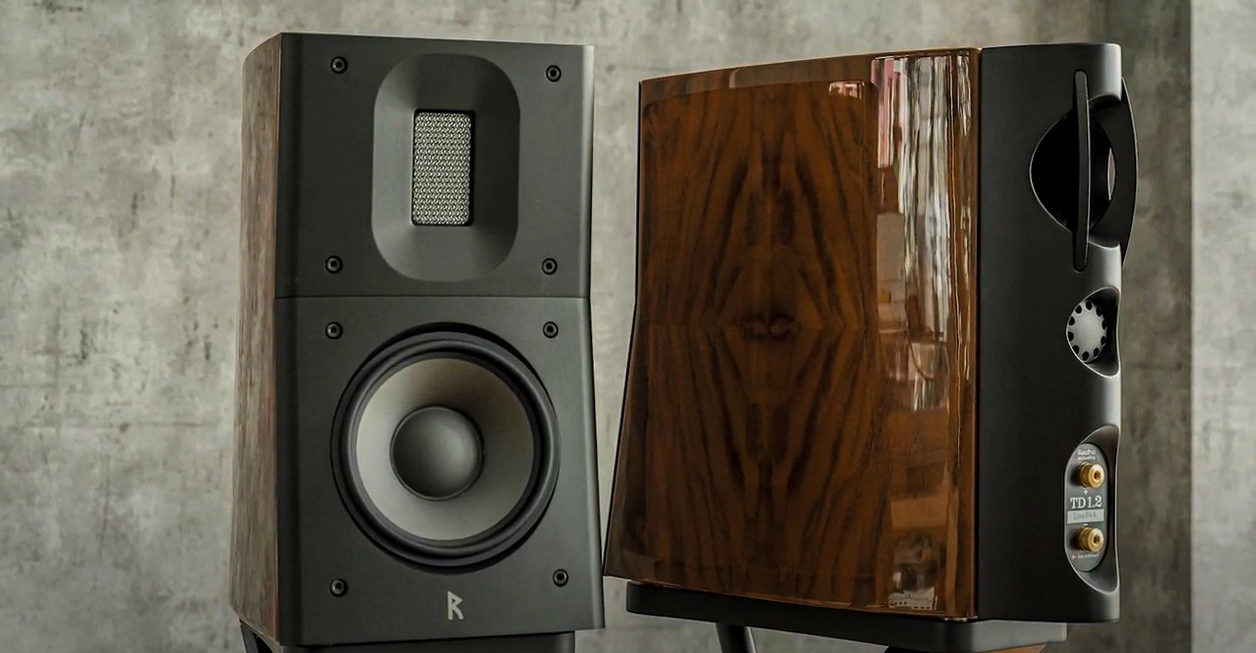 The perforated disc between port and binding posts isn't an extra aperiodic port but a screw "to help fasten the back plate to the main cabinet".

Did I mention that if burled Walnut or gloss black aren't to your liking, for €2'800/pr Raidho can lacquer this monitor in any color you please? Oscar would go wild. And I had devilish red coming. Resistance was futile.