With 1/100th of a gram super-neodymium powered ribbon tweeters plus carbon/foam-sandwich mid/woofers on super-neo motors with massive copper rings, Michael Børresen's smallest 02 tower is a next-gen 2.5-way Raidho with series filter now under his own brand. It's groomed for maximal speed from low inductance and delivers accordingly. Just then it was the most resolving and at €42'200/pr also costliest speaker on hand, ideal for magnifying the Classic PSU's contributions. The Nagra too is a component whose pricing destines it for rather ambitious systems. If this room had a typical back wall, it'd be sized similar to upstairs, just with higher ceiling. But as the dining bay of an open floor plan, it flows into kitchen and lounge spaces separated by an open fire place for ~100m² of total real estate. That allows for higher SPL and big low bass without feeling uncomfortable or over-pressurized. 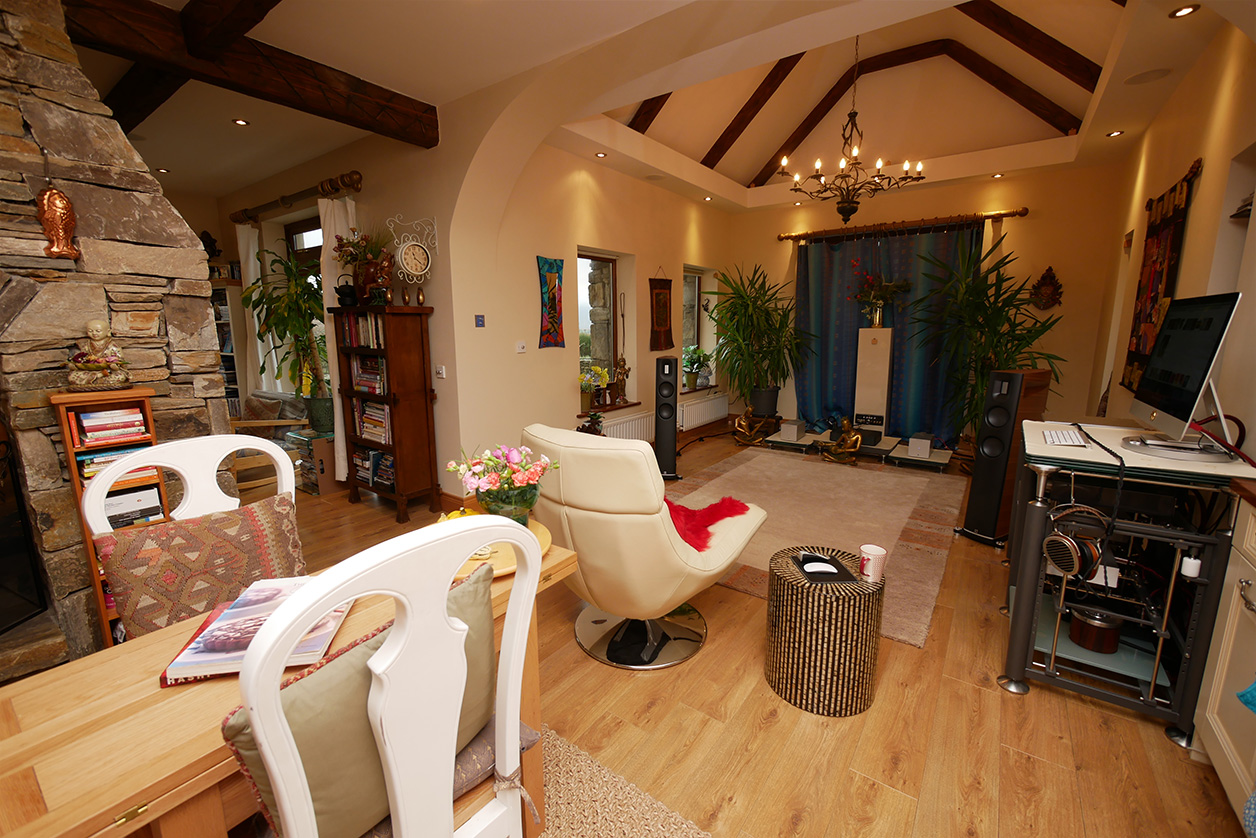 A recent musical discovery is Salar Aghili, singer of Iran's National Orchestra who also performs with the Dastan Ensemble for small-scale classical Persian music. Here is the well-recorded title track of his Negar album. That became my first referee and keen it was. On already the first sounds, I heard clear space behind them which the preamp solo didn't resolve the same. When we talk of three-dimensional sculpting, we deal in the left, right and distance-to-performer coordinates by which we virtually map the musicians with our mind. But there's a fourth marker from the back of the performer to the back of the recorded venue. It's this last cue which separates sounds out into full 3D. Now they stand free. Now they're tangibly surrounded by space like an off-shore oil rig is by water. This stronger extrication of sound bodies over against audible space sharpened contrast ratio. That made for higher articulation and superior diction. Adjectives which suggested themselves were more potent image pop, firmer grip or, perhaps best, more specific inhabitation of space. The latter isn't just a blip on our ear/brain's radar for x marks the spot. It's about fleshy materialistic ownership of that spot. This difference was instant. Over these more resolved transducers with now superior preceding kit, it also was rather more potent than it had been upstairs.

The second difference circled back to dynamic needle deflections. I'm fascinated by Aghili's vocal control and strangely quivering delivery. He hints at his ability to just let it rip but mostly restrains himself under a self-imposed mandate to express profound fragility.

With the PSU in the loop, these minorly ululating vocal gymnastics so typical of Persian singers had greater scope and expression just as I'd first heard over the Raal headphones. Now again I had lightning-y ribbon tweeters, then hi-tech composite mid/woofers expressively engineered to keep up. This prompts a fair proviso. To get the most from this power delivery upgrade does depend on ancillaries of sufficiently high resolution. By itself, the Classic Preamp is so good that to push back its boundaries with an even quieter more potent power supply needs everything else to be on par to materialize adequate returns on a serious investment. 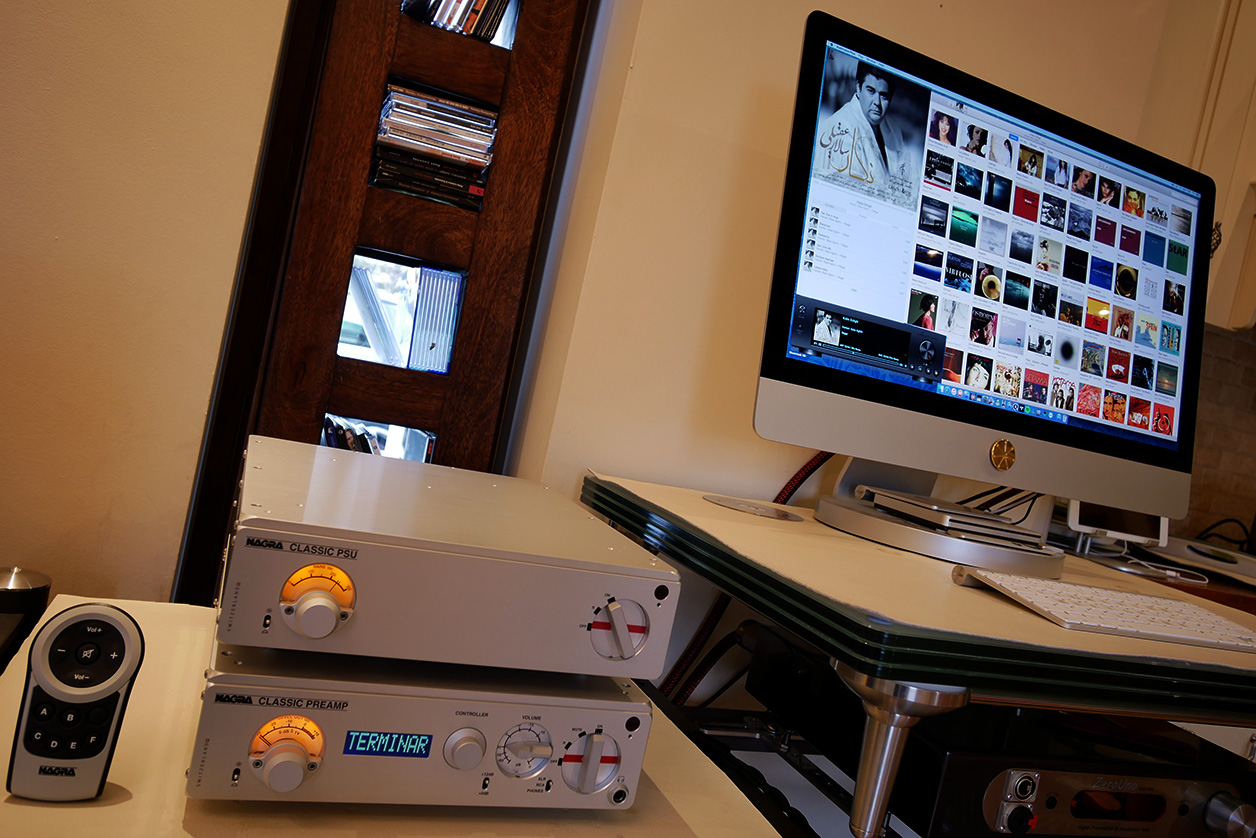 The Denafrips Terminator DAC's name is too long for the display's 8 letters so that's the abbreviation I chose.

Once one knows the difference on simpler fare, it simply compounds on more complex stuff. One might graduate to something like "Coffee Street" with full steel-drum and brass bands and the incomparable Andy Narell on lead pan for some super-caffeinated syncopations. Texas isn't just about Country Western after all. If you enjoy such calypso, also check out Andy Narell's more intimate outing at La Note Bleu with a stellar cast on piano, bass, drums and congas. 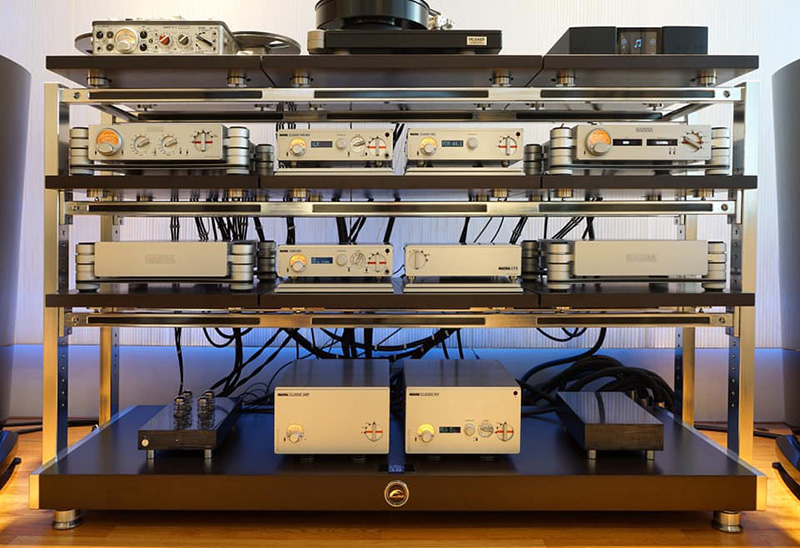 In closing, Nagra's Classic PSU on our Classic Preamp acted as a resolution enhancer. That meant even more decisive transients, more specific imaging with even finer recovery of recorded ambiance and as a function of those qualities, a more complete recreation of a performance recorded elsewhere then superimposed on our own acoustic.

Proper power delivery has always been a core credo of upscale hifi. After all, it's modulated utility power that creates the sounds we hear as music. Lower noise and higher current on demand are the two feet on which this equation dances.

With the Classic PSU, the Classic Preamp became an even more all-singing all-dancing proposition. In our not so over-the-top hardware context, I actually didn't expect the sonic advance to be this obvious.

What to expect of upgrading multiple Nagra components with one maxed-out Classic PSU for up to three times the same benefits?

Not knowing, I have to plead the fifth…