After all, triode-strapped tetrodes or pure pentodes are picked to increase not diminish the single-ended power over pure triodes. Likewise, it's the more powerful tetrodes and pentodes which get championed for push/pull circuits to compete against transistors. They minimize just how many bottles must be paralleled to hit a certain power target. It's always easier to sell a buyer on more power than less; and less complexity to make it so. How many 80-watt 300B monos like Canary Audio's do you know? Those must run eight costly 300B per channel when two KT120 by Audio Research do the same job. 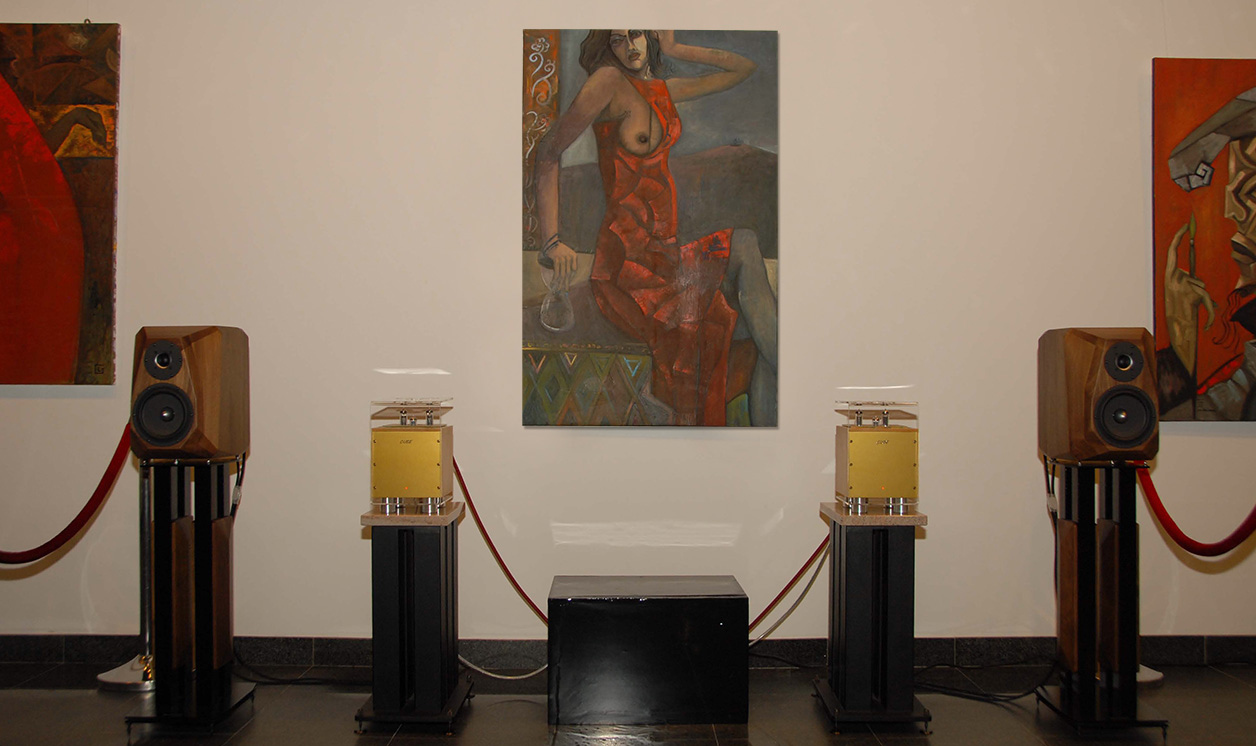 With  91dB Diapason Adamante during an Art Gallery showing.

At 6 watts, a single-ended EL84 amp makes less than one equivalent 300B which can be sold for a lot more. In push/pull, 50 watts would take an octet of 6BQ5. As a lowly-powered pentode, our EL84 is an outlier choice in home hifi even though it remains one of very few tubes which specifically were designed for audio use, not re-purposed from other applications. That less-popularized fact is why even amongst direct-heated triode cognoscenti, the EL84 can be an acceptable commoner's choice. It's why years ago, I commissioned Trafomatic's Sasa Cokic for the 25wpc Kaivalya monos which remain in their portfolio. Today's MySound Cube monos from Poland wring a logical 12 watts from a single pair of EL84. In certain corners, creative marketeers refer to such circuits as single-ended push/pull even though the term is an oxymoron. But it does properly highlight a single output device per half wave or phase as being the absolute minimum hence 'purist option' for push/pull architectures. The 10kg pure class A Cubes drive their EL84 pairs with single 12AX7 for a published 16Hz – 65kHz response. They are available as pure power amplifiers; or fitted with 48-step Khozmo passive attenuators to morph into single-input twin-chassis 'integrateds'. 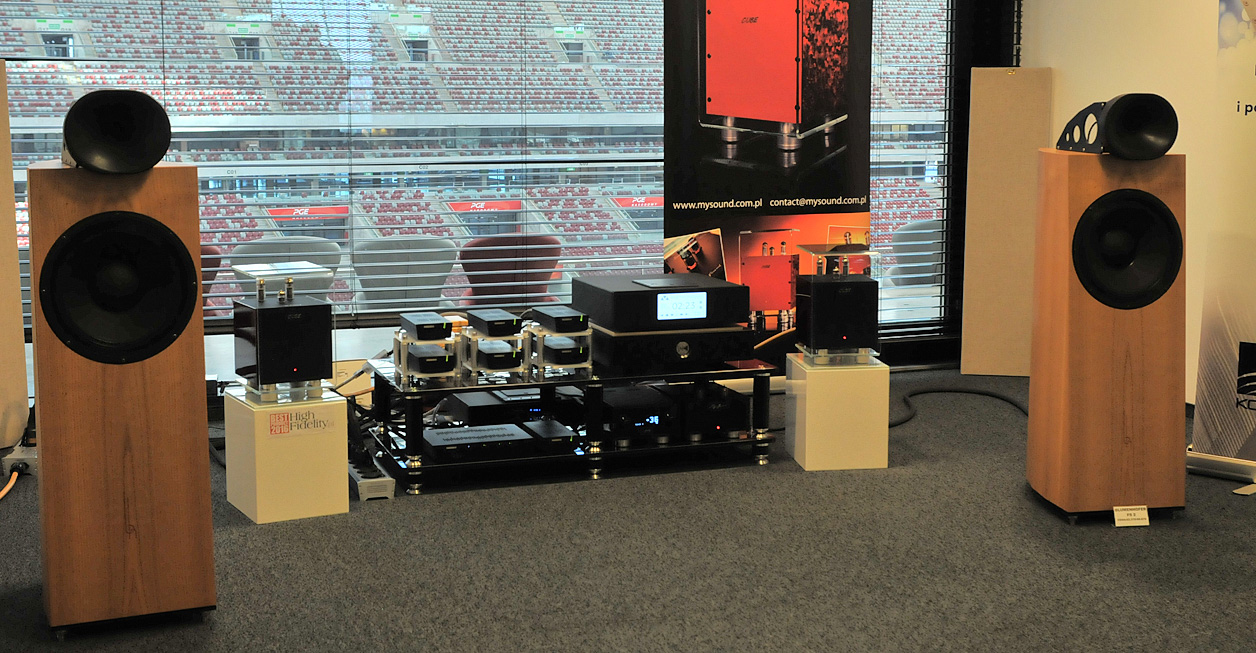 At the 2018 Warsaw show with Blumenhofer speakers, Métronome disc player and SOtM digital. 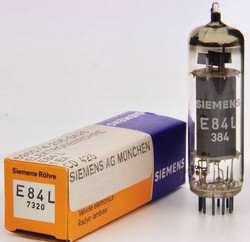 Once we shift eyes from specifications to appearance, we take in stained Bubinga wood cheeks which offset the fascia in matching red, black, white or gold. We admire stylish glass covers which echo Engstrøm's and can be had in smoked glass to complement a black chassis.

Such stylish extravagances suggest more than functional squareness. The amorphous-core transformer option confirms it. So do show sightings with high-efficiency horns to speak to very low noise.

Once we learn that their genesis was predicated upon wanting perfect amps for Sonus Faber Extrema speakers; that to this day MySound make no other amplifier; then contemplate the brand name's implications… we might suspect glacially-moving spirits more obsessed with perfection and pleasing themselves than playing marketing games.

UK distributor G Point Audio discovered and promoted them since 2012 when they debuted in Munich. At the end of 2018 thus six moons later, they still had booked only two reviews in English. A cubist revival seemed in order. Our resident Cube Audio Nenuphar widebanders also from Poland would be ideal partners to kick into Cube Squared mode. The company's Artur Biniak proved willing and these die were cast. For the reasons given, the market place for EL84 amps is quite narrow, even more so for those priced as statements. For example, the Still Audio EL84 integrated reviewed by prior contributor Jeff Day for Positive Feedback gets $2'895. The Canadian Triode Lab which Frederic reviewed in these pages nets from €3'500 – €7'000 depending on performance package. A pair of Mahi monos from the pro/home experts at Manley Labs set you back $4'900. A pair of Trafomatic Kaivalya was €5'500 factory direct when I bought then reviewed mine. 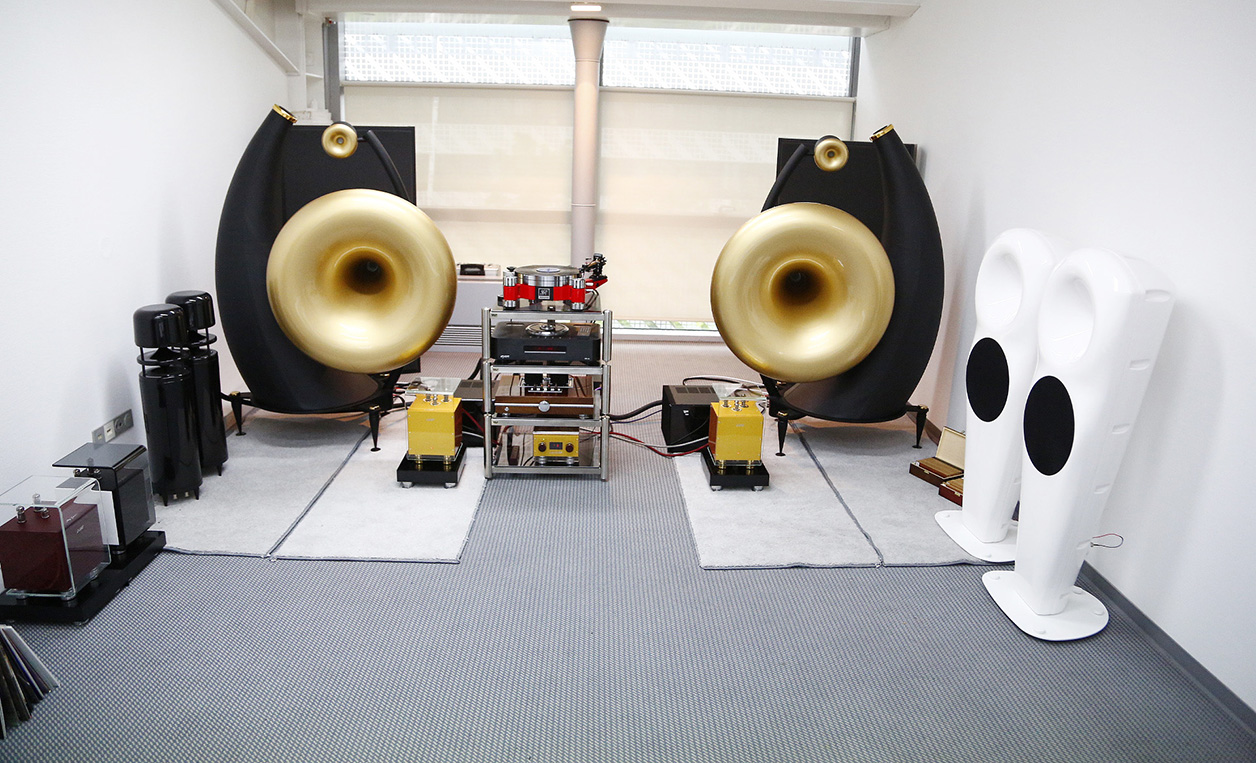