Christian Peters: "When used as a master clock, you want to set the MC-3+USB to mode intern, clock out = 44.1kHz and the clock multipliers = 1: x512wc which will  light up the last two LED in that row. With that adjustment, both word clocks outputs under '1' will supply your 22.5792MHz." That did the business like instant coffee. Just in that instant—well, just a few hours after—reader Brian Livingston checked in. "I have been running the MC-3+USB with a Mac Mini, Jay's Audio CD2 MkII transport, Denafrips DAC, S.P.E.C. W3 amplifier and Nenuphar speakers for about a month. My take on it is that via USB, the sound now is much more open, the noise floor lower and separation a good deal improved. Now USB is also much more musical. With the CD2 transport (XLR in/out), it is killer. These improvements are quite dramatic and now make for the best CD playback I've heard. I even tried it on a $35'000 CD player and it too benefited to a similar extent. It seems that the jitter problem so widely discussed was successfully addressed by this Mutec. On my current system, S.P.E.C.s volume control operates outside the signal path which gives a very good improvement. With your recommendations on most of my equipment, I have to thank you again. With my Mutec currently up for review, your results will make for interesting reading." I'd not thought of Brian's application with the Jay's Audio disc transport. Having one too, I'd have to follow his de-jittered tracks and see where they led.

The Deeptime Thunderstone active sub driving the Spirula satellites is only fitted with an Apple-style 3.5mm stereo/Toslink combo input. USB is conspicuously absent.

In fact, I'd have to try the MC-3+USB on my desktop where it'd replace an Audiobyte Hydra X+ into a pair of active Fram Midi 150 via S/PDIF coax; or into a COS Engineering H1 via AES/EBU for balanced headfi into a Final D8000 planar. Its Toslink output could even solve my issue of supplying Deeptime's Ionic System with a wired not Bluetooth computer signal. All other USB bridges in-house were just too 'high-brow' to bother with optical. That made them useless in this application. Only the Mutec was an equal-opportunity employer to enable a meet of USB and optical. What a boss!

MC-3+USB vs. D300Ref clock. I couldn't tell those two apart, period. I could cite three reasons. 1/ my hearing wasn't keen enough. 2/ our system was insufficiently resolved. 3/ Soundaware's own clock was as good as Mutec's. 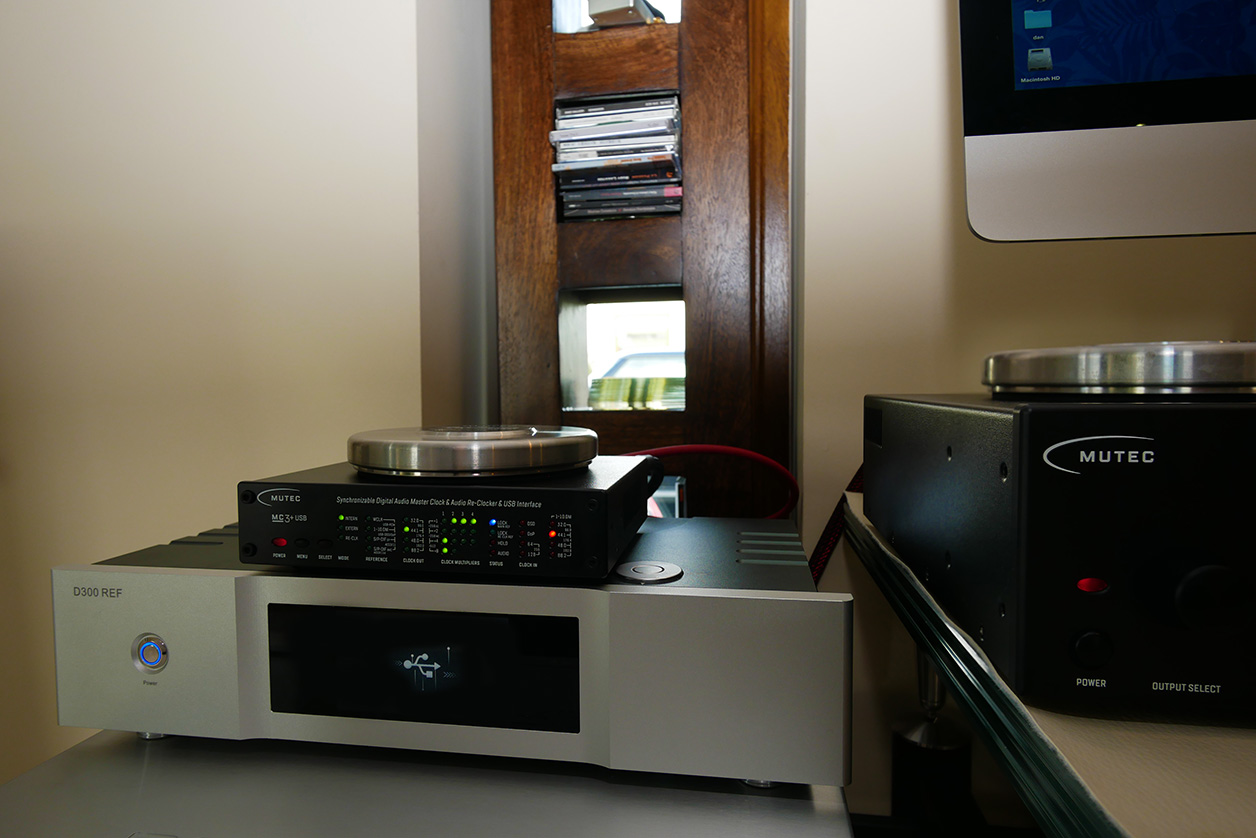 Jay's Audio CDT-2 MkII with/without Mutec reclocker. Playing Bryan, this comparison had the transport via I²S over HDMI into the Denafrips DAC and via AES/EBU into and out of the Mutec. Source material was structurally simple but very well recorded: the Mosaïques hybrid SACD on the Croatian Lumaudis label featuring Edin Karamazov on lute and Stefan Milenkovich on violin. I'm partial to their Indian raag dialogues of Ravi Shankar's "Enchanted Dawn". So its slow movement kicked off these sessions until I had a fix on the action. Then I followed up with James Horner's Titanic soundtrack and in particular, "An ocean of memories". 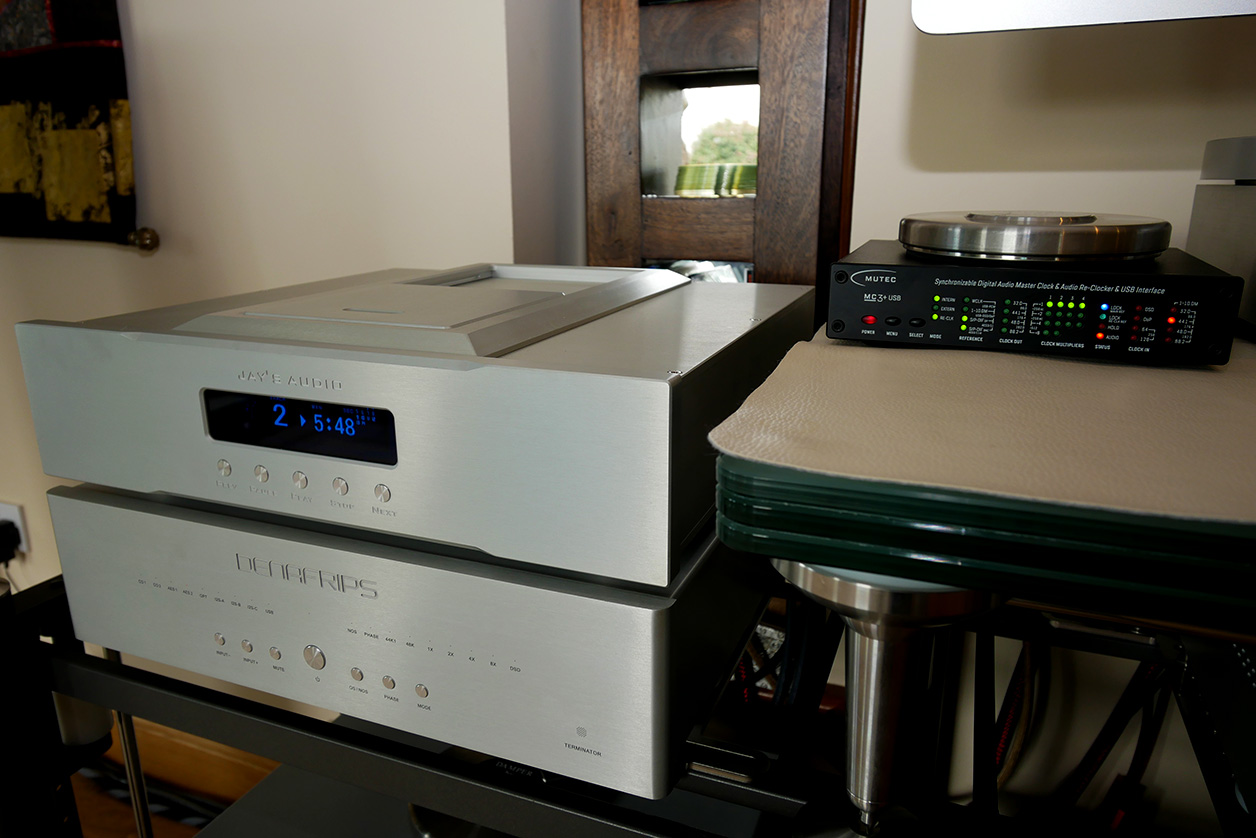 That verdict was as simple as hearing nada in the prior experiment; except with a different outcome. Now the Mutec detour made for clearly better focus and timing. Focus is simple to understand. It works just like a camera taking stills. Timing is related but more subtle since it's not static. On individual string plucks for example, the Mutec had their attacks—the markers whereby our ears lock onto rhythmic precision—better defined. My favorite word here is enunciation again because with so many films, diction is quite poor and rapid banter hard to follow. Actors with superior enunciation are easier to understand. Likewise for the MC-3+USB's contributions. Like fresh footprints on a beach which still exhibit sharper edges before wind and dryness begin their sandy erosion, tonal beginnings were better defined. With these markers deeper or crisper, the sense of rhythmic progression through time was superior. A side benefit was that during more complex music, separation and inside-out clarity were higher.