In the frame. For moo not boo, our music iMac with locally hosted files on its FusionDrive was the ideal patient. Detractors call it a noisy jittery source unfit for serious audio. That should demonstrate the ill effects of USB-related noise/jitter and, by contrast, the audible benefits of its removal. Our usual bridge here is Soundaware's D300Pro with a super-capactior virtual battery power supply and SD card reader, display and IR remote. The MC-3+USB would replace it to hand over incoming USB data to our Denafrips Terminator DAC. Lacking the superior I²S-over-HDMI interface of the Soundaware ⇔ Denafrips pairing—the non-standard nature of external I²S transmission relies on flexible pin configurations to insure that hardware from sundry manufacturers actually shakes hands even if it has the right sockets—the new DAC input was AES/EBU. Prior tests had found it superior to S/PDIF via coax or BNC. The master-clock link used a Ref10 75Ω output as referenced in its list of partner devices. Some of them take 50Ω so the Mutec has two such ports plus six terminated at 75Ω. What home hifi has eight different digital devices that need to be slaved to a single shared master clock? 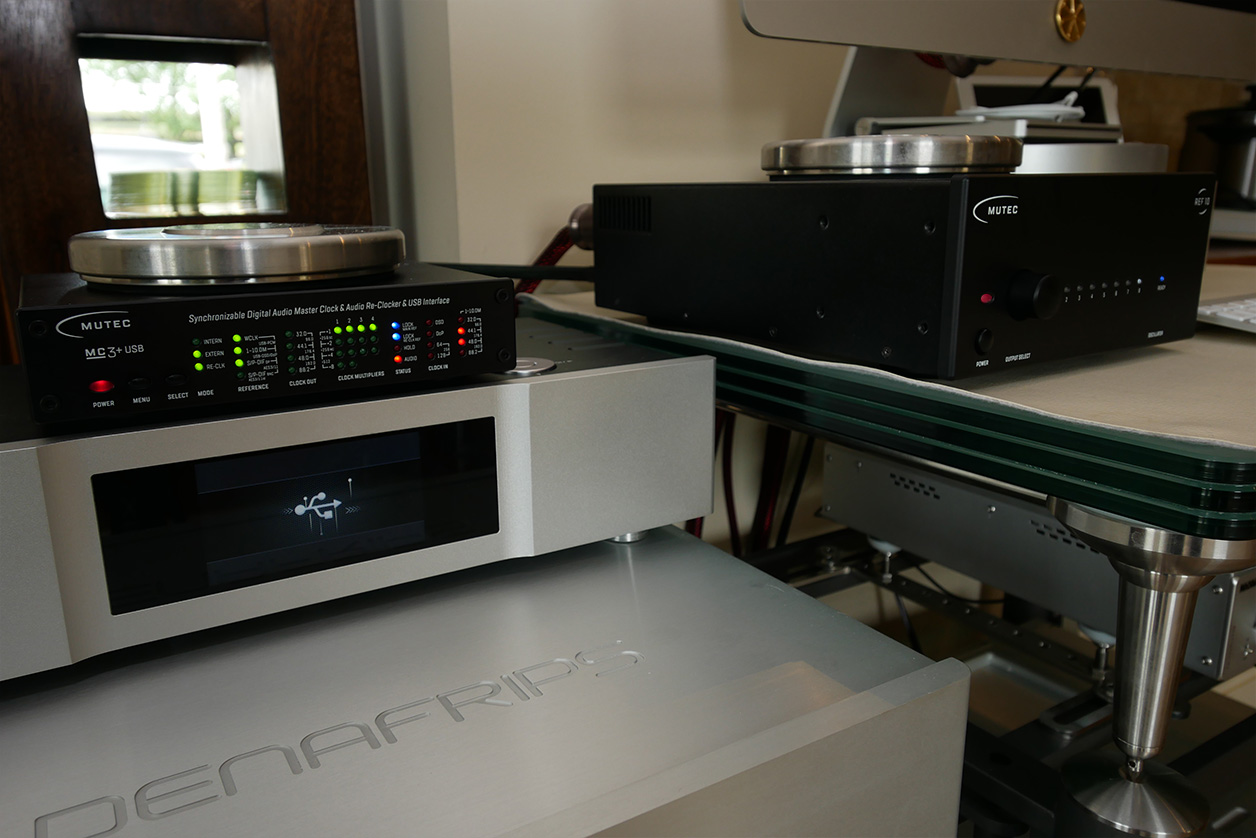 Here we see the MC-3+USB set up for external reclocking, USB input and receiving 176.4kHz data. The Ref10 was live only on output #8.

For my far simpler sessions, I compared USB direct (iMac⇒DAC) to USB bridge with internal clock (iMac⇒Mutec⇒DAC) to USB bridge with external clock (iMac⇒MC-3+USB⇐Ref10⇒DAC). The ultimate setup would have run a second master-clock line from Ref10 to DAC but our Terminator lacks a word-clock input. A second round of sessions would use the Soundaware with/without Ref10 since that does have a word-clock input. At what price point should one expect sufficient engineering excellence from DAC designers to render add-on D/D converters redundant? To me that is a very good question. You'd certainly not expect to spend €40'000 on an MSB or dCS flagship DAC only to learn that €5'000 worth of USB bridge + external master clock can still peg their performance needle. 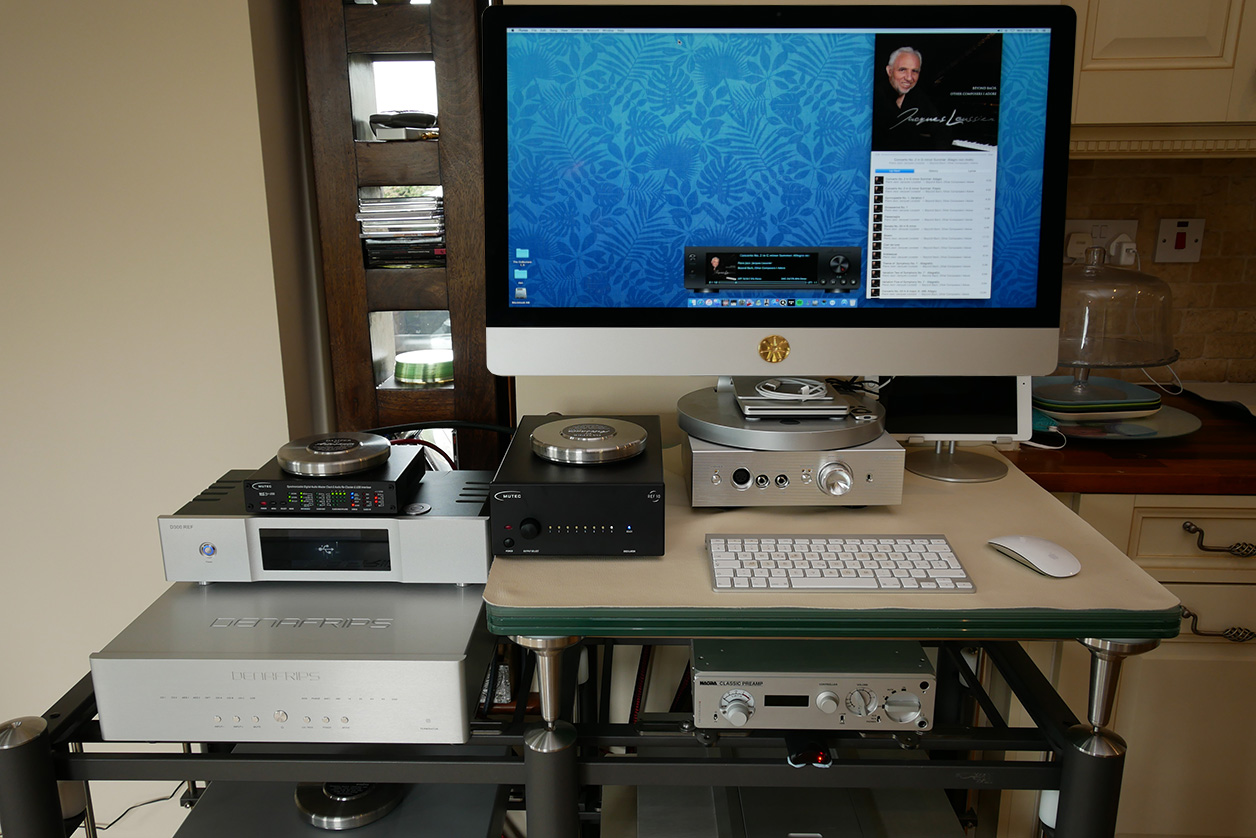 The remainder of my setup was our customary Wyred4Sound STP-SE II preamp, 200-watt LinnenberG Liszt mono amps and Audio Physic 4-way Codex speakers. All analog interconnects were Allnic Mu-metal shielded XLR given the fully balanced nature of this hardware chain. All power cords were Allnic Audio.

For superior source material, I spun up my favourite trptk release to date. That's Traveling Light. On it the Intercontinental Ensemble of a classical nonet—that's a woodwind quintet plus string quartet for nine players—performs transcriptions of classical symphonic movements. The mastering equipment for this sterling production included Furutech cabling, a Hegel H-30 amplifier, KEF Blade Two speakers, Sonodore and Brauner microphones and Merging Tech Hapi AD/DA converters. The 6th track is the "Andante con moto" from Schubert's unfinished Symphony N°8 in B minor. On this video they play some short Beethoven instead to convey the 'traveling light' symphonic concept:

Using Audirvana 3 to bypass iTunes and select the output device, I kept circulating in three steps of DAC direct, DAC + 1 and DAC + 2. This gauged the additive effects and then, from step 3 back to 1, the subtractive hit of reverting from full bore to solo again. Given the Terminator's quality Amanero 384 USB transceiver implementation, these games weren't nearly as dominant as the 2019 women's world cup 13:0 soccer massacre of US vs. Thailand. Rather, think of them as more 1:0 or 2:0 late deciders. The Mutecs gained their deserved wins but had to work hard. The first step of MC-3+USB was greater than the second step of adding the even more precise master clock. How did these wins translate, sonically? 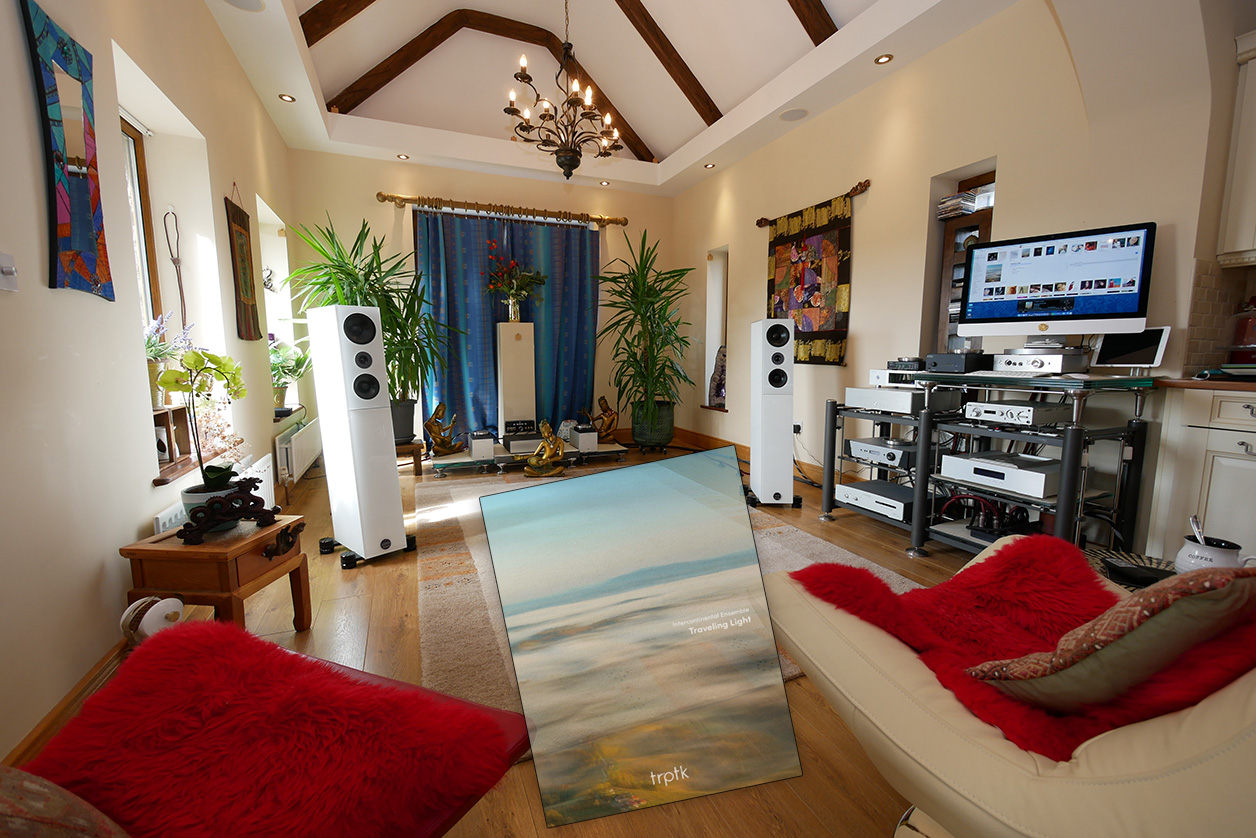 I took note of clarifications in a few areas. One, the compound timbres of unison or octave-doubled passages between constantly shifting instrumental pairings were easier to separate back down to their individual timbres. If French horn + bassoon + cello are followed by oboe + viola then clarinet + flute + double bass, some listeners may just want to delight in the new tone colors that emerge from such blends. At the same time, others will want to tease out what shaped them like a chef who eats at a competitor's restaurant to steal a dish. That's what the two-stage external reclocking assisted. Next, the non-legato portions' rhythmic vigor—its emphatic timing—peeled out as better enunciated. The attacks had better diction. Finally, wispy clouds of hall sound surrounding players became more apparent. In audiophile lingo, we'd point at timbres, timing and spatial specificity as the key areas where a reduction (elimination?) of computer-borne noise and jitter traveling down the USB pike cleaned things up. As always when the focus isn't on easier stuff like tonal balance or dynamic range, it helps to begin with slower less complex music. Once we know where to 'look', we recognize the same effects also on more complicated faster material. Obviously the better the recording, the more minutiae and subtlety there are to tease out in the first place.

Whittling things down to just three instruments plus vocal percussion, Anoushka Shankar's "Lasya" from her Traces of You album was helpful. Particularly on the subtle resonances of her drone strings and the hollow miniature warbling aspects of the hang as a kind of inverted steel drum invented by Felix Rohner and Sabina Schärer in Switzerland, the Denafrips DAC resolved more with the two Mutec assistants. If all you listened to was maximally compressed fare of less than 6dB of recorded dynamic range, would this still matter?