Upstairs. Whilst finishing up another review in the main downstairs system, Spoey230 got busy in a smaller room fronted by a groomed-for-speed system of COS Engineering D1 and Crayon CFA-1.2. S/PDI-fits came from a Soundaware D100Pro SD card transport across a skinny Chris Sommovigo leash. I tried both near- and mid-field setups. It didn't take long to get a good grip on what Lu Kang's big model with its optical DNA of proper Harbeth/Spendor Brit boxes was all about. 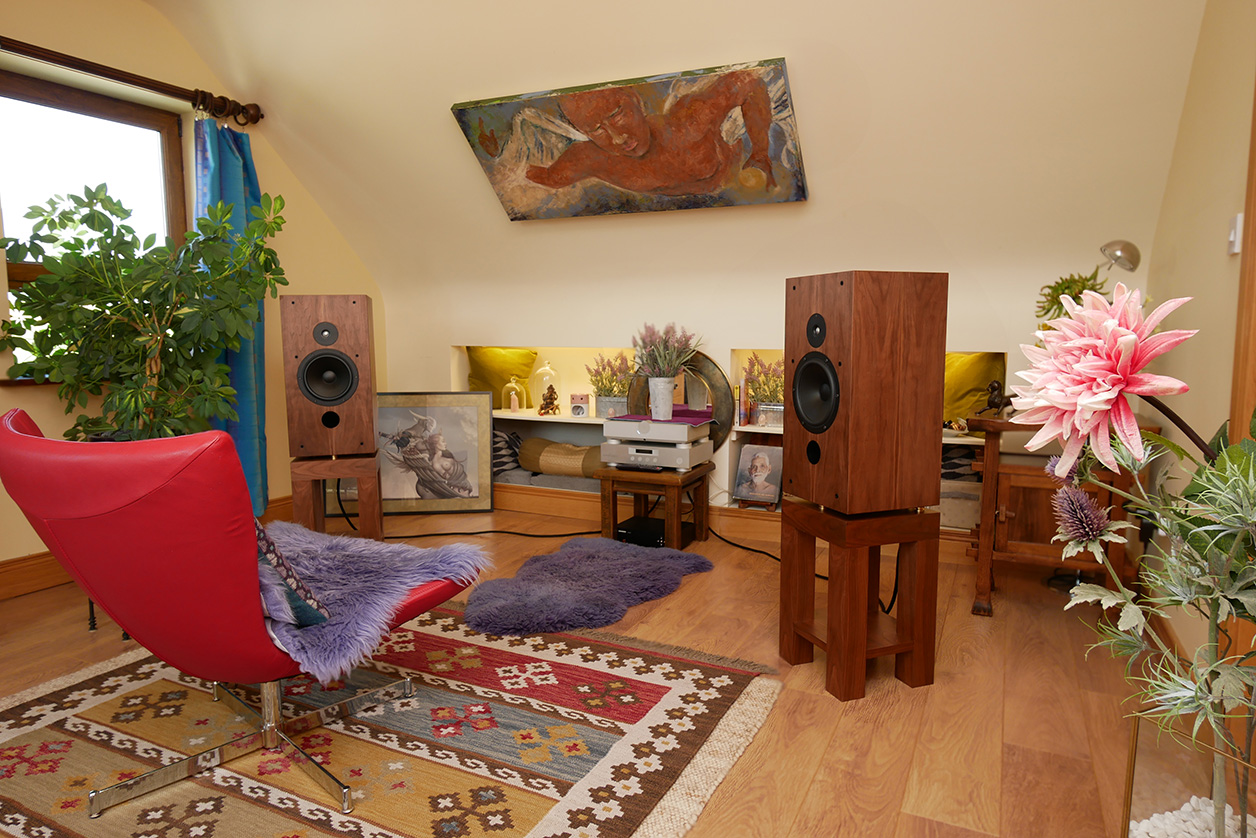 Nearfield setup with ultra-steep toe in creates a quasi immersive "kinda like giant headphones" effect and eliminates the room as much as possible.

Its sizable top-quality AudioTechnology mid/woofer created an upper-bass/lower-mid center from which the sound blossomed out like ripples around a stone hitting water. Both frequency extremes played it a bit laid back. This emphasized developed tone density like punching up the black values in a photograph. It will eliminate some very fine half tones and associated detail but in trade intensify color pop and perceived contrast. Meanwhile the minimum-phase/minimum-parts filter benefited taut timing for excellent beat fidelity whilst the meatier voicing coexisting with transient snap meant that leading edges didn't slice like a razor blade or sizzle from forward upper harmonics. So PRaT without over-caffeinated haggardness or relentless drive. 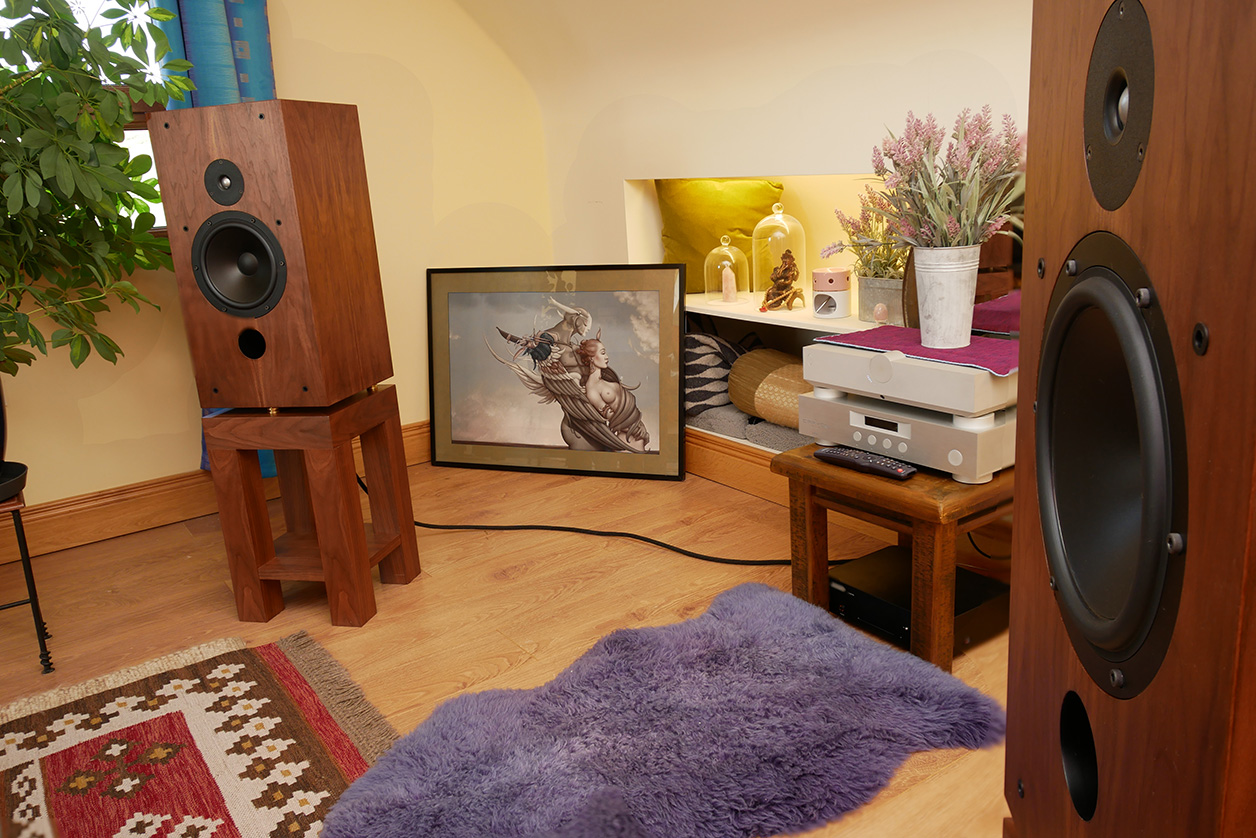 With no warmth injected by these particular electronics, Spoey230 still telegraphed very attractive warmth that was placed in a dry not humid milieu. That was its own contribution and as such, a function of its driver and other parts choices. For my personal tastes, harnessing valves for additional warmth or textural richness would go too far unless it were a truly mild dose; in which case you'd easily get it from darker transistors like class A Pass Labs. Of course the tubes + Harbeth approach has fans and if that's your bailiwick, Spoey230 would get you there as well.

Exactly like the black-colored ¾" Hiquphon tweeter of Kroma's Mimí, Spoey's was very demonstrably not as informative or excavatory of micro detail as our Albedo Aptica's Accuton or the active Fram Midi 150's SB Acoustics soft dome. Whether that was the innate nature of this Danish driver or simply how two different manufacturers opted to tap it I couldn't say. In the other direction of the bandwidth, Mimí's smaller ScanSpeak mid/woofer in its more compact cab worked harder to dig deeper. This was likely due to a more ambitious port tuning where the Spaniards are counter-intuitively potent even for experienced listeners who are long over the tired aw-shucks routine of "surprising bass for a monitor". Thus don't equate Spoey's box size and mid/woofer diameter with supreme low-end reach. Its tuning isn't about that. 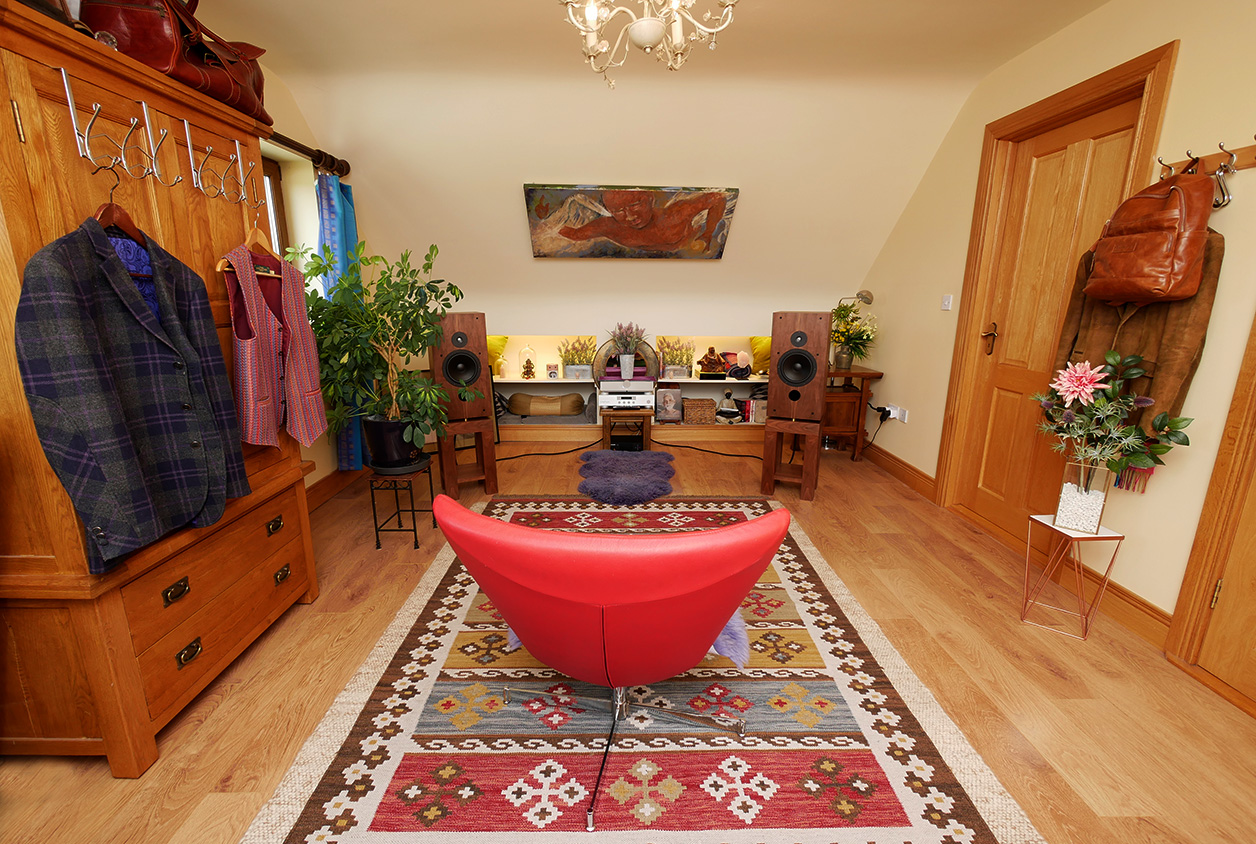 Midfield setup with the chair past the half-way mark of the room's long axis as a more traditional stereo choice.

Given the preceding 20 years over which Lu Kang's father/son team had already whittled away at acoustically perfecting their design, it really shouldn't have come as any surprise that Spoey230's two drivers which on size seem just a bit oddly matched would really speak as one. But I do confess that my eyes still needed confirmation from my ears before they gave up their protest and just closed. Ahhh.