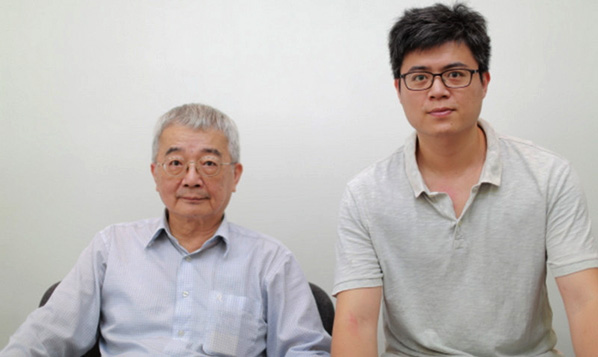 Chinese New Year. Called the greatest human migration on earth, the number of Chinese city workers who return home to visit family over the Lunar Year period has increased from 100'000'000 in 1979 to about 3 billion by 2019 to tax mainland China's transportation systems by land, sea and air. Whilst Rox had aimed to expedite his shipment prior to this onset of madness, local freight companies this year had shut down early. He had to wait things out.

But by February 15th, he emailed that four boxes with the speakers, stands and Lu Kang's very own spikes were finally en route to a British friend of his. He'd handle formal importation and pesky value-added taxation into the EU, then forward the lot to Ireland and receive it back afterwards. Rox had attached the below photos to show what was coming – not petite mini monitors as we knew already. At right we see him with his father who started the company. Between the two, sundry precursors of what today is known as Spoey230 clocked a full two decades of iterations.

There was thus a lot of unhurried maturing and fine-tuning going on behind the scenes to arrive at the apparent simplicity which is today's product that's now presented to the world at large. In particular, Lu Kang were very keen to keep their network filter as minimalist as possible. This depended greatly on identifying the right two drivers which would sing together seamlessly without notch filters or other surgical intervention. The list of drive units from very well-regarded suppliers which eventually were rejected is apparently quite long. To finally gain simplicity that worked perfectly wasn't easy. 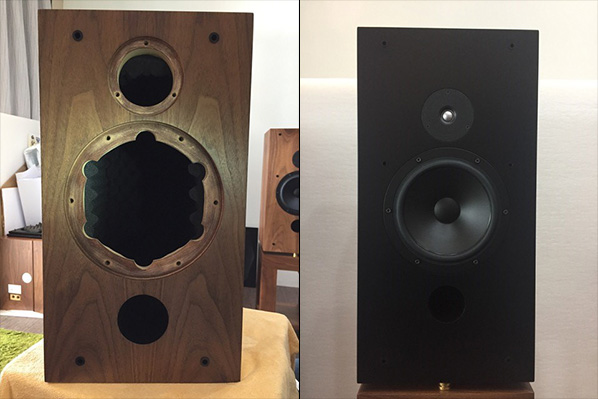 In fact, "we wind our own aircore inductors and the parts for each speaker pair [above] are matched down to the 4th digit after the decimal point." Simple but precise. Folks used to more conventional 2-way driver combinations will wonder how a ¾" tweeter (smaller than usual) plus a 9" mid/woofer (larger than the norm) meet in the middle without dropping things in the process.

My audition would check on upper-midrange-to-lower-treble lucidity/insight to see whether expected benefits of a bigger mid/woofer on density and tonal weight would be offset by reduced resolution in the presence region where Zu's big 10.3" widebander goes softer.

As to what goes on inside Lu Kang's boxes, "we strengthen the corners with triangular wood bracing. The cabinet panels themselves are 1-inch MDF and the standard finish is real Walnut veneer but we can also customize our speakers with specific piano-gloss lacquers. The inner walls of the enclosure are treated with thick rippled acoustic foam liner to absorb internal vibrations."

When Spoey230's time came to make sound, one played it mute. After emailing Lu Kang, Rox asked that I undo the terminal plate. Voilà, no lead in the '+' post's screw channel. After unbolting the mid/woofer, I found a spare lead inside the box, fished it through the foam liner out the cabinet hole, secured it tightly by screw and redid the terminal plate. Firing up a Pass Labs amp, now both channels waved at me. Huzzah!

Alas, I soon noticed that the repaired channel still had no treble. Asking Rox whether 'my' terminal was supposed to have two leads not just one, he confirmed it. Looking inside again now with a flash light, I found the tweeter capacitor completely disconnected like a spare part. At this point I thought that a proper repair exceeded my DIY skills. I asked that Rox's UK friend do a properly vetted job of it; and why they dislike using solder on their posts. Rox explained that they prefer the sound with just their screw connections. That was on a Monday. Later that day he announced his arrival for Thursday of the same week. He'd fly in from Taiwan to do this personally. That was serious product support. How serious? Flight from Taipei City, 13 hours. Arrive at Dublin 6:55AM. Train to Galway, bus to Westport. Arrive at hotel ~2:00PM. 20+ hours of travel. One way. The same for the return trip. Nearly two full days spent in transit. We just know that Spoey230's internal wiring will never come apart under the rigors of international shipping, ever again. Not that it ever did before with shipments to Norway or elsewhere in Europe. Irishman Murphy simply likes to wait until a reviewer is involved. He is mean that way.

While watching Rox make the 20-min. repair, I saw two in-line tweeter capacitors. This they prefer sonically to a single unit of combined capacitance. Their branded yellow caps are fully custom with their specified lead-out and body materials. I told Rox that I didn't think their current grill solution with six pegs to be cosmetically commensurate with price. Today's competitors use veneer-covered magnets instead. Rox agreed. He also mentioned looking for a harder veneer. "We've spent years refining the sound which is locked in to perfection. Now it is time for us to fine-tune the visual package."