With p/p EL84. Mayte Martín's Tempo Rubato album is an absolutely glorious genre crossing. On it, a most gifted Flamenco singers embeds herself in formal string quartet and guitar, then covers a repertoire of cancíons whose compositions but certainly not delivery recall Mercedes Sosa here and there. Her vocal expressiveness is unexpectedly dynamic if your system will track these swings to their fullest whilst the classicist timbres of the Quartet Quitxote put extra demands on a hifi 's scope of tone colours. What on the surface doesn't appear challenging in fact is if you know what's possible from this material – perfect to kick off the R25A sessions.

What quickly emerged were passionate cancíons presented with most midrange-unforward soundstage depth and bowed string tone which clearly triggered oscillating tone-wood bodies. That captured not just metallic tone rises but their organic bloom and overlapping fades. Just as earlier, in their own review versus our 1MHz lateral Mosfets, these EL84 had been a bit freer on the ring-outs—technically not as damped—so the Living Voice cabinets now contributed more of the same over the synthetic Krion stone of the chemically welded Kroma Audio Mimí monitors shown next. It was a similar if less pronounced effect to the actual Alpine tone wood used by the Swiss soundkaos speakers. It makes for a certain gush factor that, genie like, lets the tunes out of the boxes. Inherent in the mating of R25A + Cubes was a temporal mellowness. Metronomic beat keeping felt more relaxed and elastic. Given the album's title, that was most à propos. With a clean dozen watts in the driver's seat, it was a winning hardware combo to demonstrate that the R25A will sing full throttle on such amps. With the Polish valve variants due back, our FirstWatt SIT-1 and SIT-3 static induction transitors would continue with the low-power theme but still exhibit bona fide triode curves and no feedback. 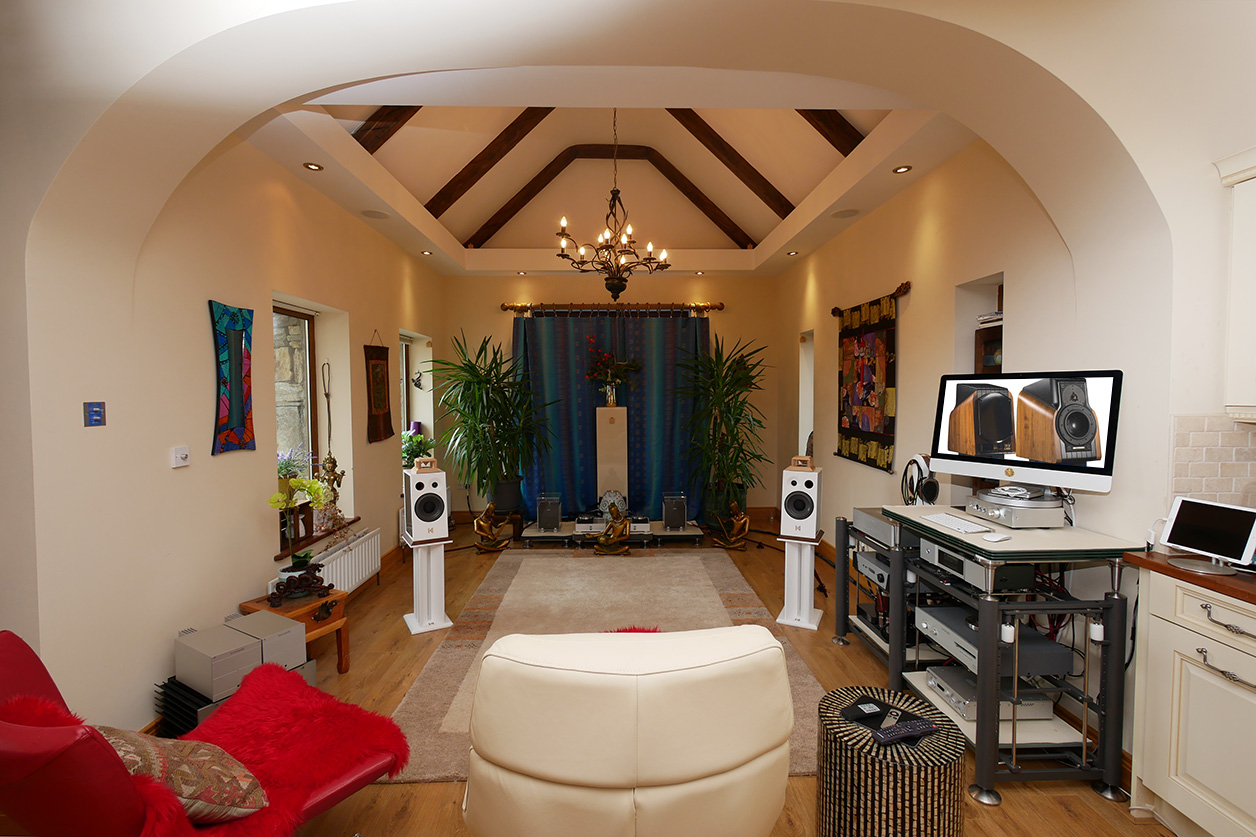 Sonus Faber Extrema on iMac screen as the personal speakers of one of the two  MySound designers which prompted the genesis of their Cube monos.

Somebody disappeared my speakers. Funk. They only left the Black Cat Cable Lupo biwire as though it were chopped liver. 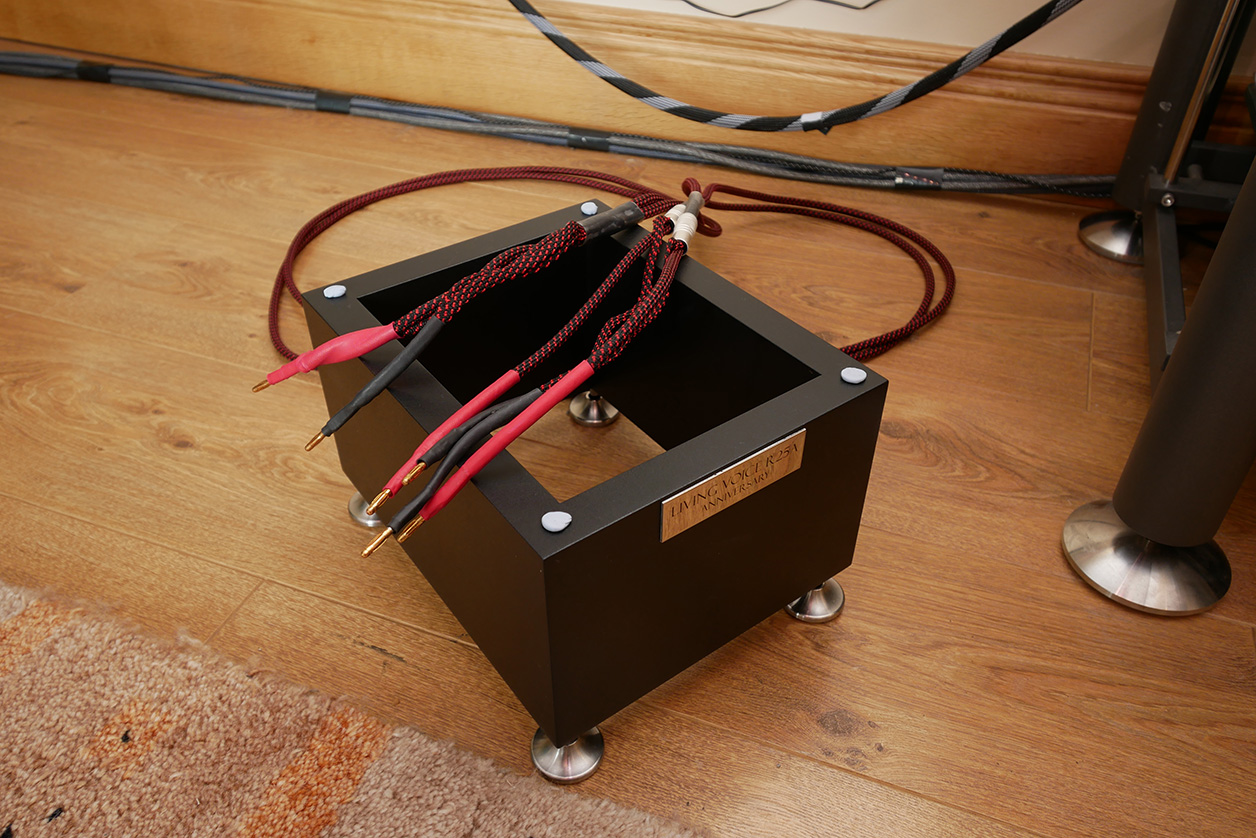 It's admittedly novel but these Living Voice plinths really do attach with just BlueTak and are perfectly hollow whilst at it. Here's the show as it stands—or lies down—right after unpacking. Which now returns us to sound… 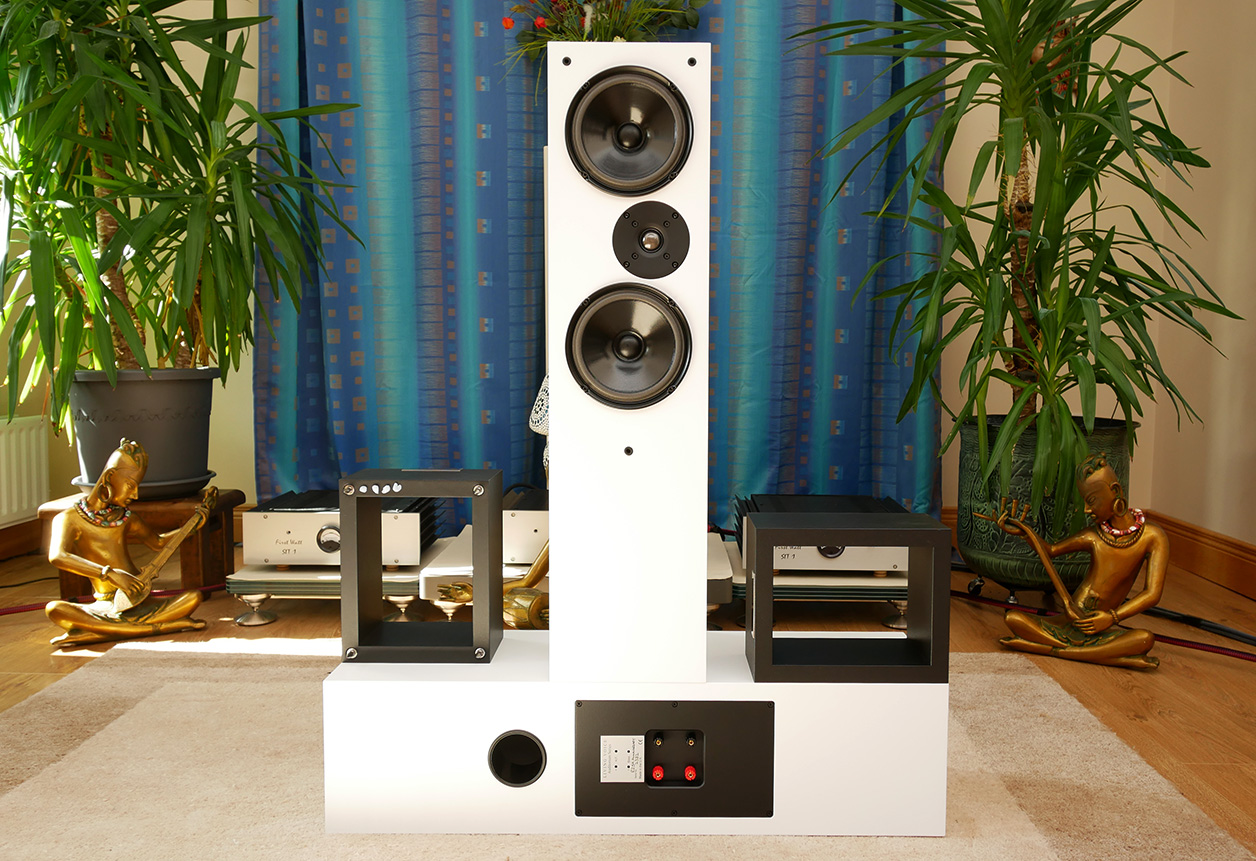 … with the Nelson Pass FirstWatt SIT-3 in the driver's seat and a matching Pass Labs XP-12 line stage in front. Should you wonder why my SIT-3 is silver, I misappropriated the faceplate of an F7.