R25A. The current model traces its lineage all the way back to the Living Voice Auditorium MkI. That was Kevin's re-interpretation of the Dali 104. When the Danes discontinued that model which he at the time sold in a hifi shoppe as part of a carefully curated systems portfolio, he decided to revive his own take. He couldn't see himself do without a speaker which so perfectly integrated with the electronics that were at his disposal then. His next model called Avatar became a ground-up design. Its drivers, though similar, scaled up their motors and suspensions. Eventually Vifa discontinued all of these drive units. Being subsequently absorbed by the Chinese Tymphany consortium, even the tooling for the transducers vanished. When Living Voice transducer inventories depleted, they approached ScanSpeak to have them reissued. This meant costly tooling paid for and thus owned by Living Voice. It also meant drivers which now were exclusive to their brand.

Today's Living Voice 6.25" mid/woofer still goes by ScanSpeak's internal C17 designation despite no longer being part of their official catalogue. It sports a foam surround anti-bacterially treated to prevent eventual decay in more tropical climates; a doped-paper diaphragm of shallow curvilinear profile for good off-axis response; a stamped steel basket which Kevin far preferred to an otherwise identical driver with cast magnesium basket; and a narrow diameter voice coil on an aluminium former. Unlike in a classic d'Appolito array, Kevin's chosen soft-dome tweeter offsets the center axis in a golden-ratio aspect and is preferred set up to the inside. This 26mm tweeter has an aluminium face plate, copper voice coil and dual magnet motor.

Over the years, the original Auditorium MkI morphed into the MkII which became the R3 which became the R3R. Whilst looking identical to its predecessors, the R25A's crossover is a complete overhaul with 15 extra parts over the last iteration. It now even includes a 700Hz LCR trap to absorb a resonant tweeter mode. A total of ten caps in three different types allocate two units to the high pass, five to the low pass and three to the trap. The hookup wiring is directionally oriented deep cryo-treated low-inductance copper. When their long-time Danish wood shop in Hornslet went into receivership to herald an inevitable change in Living Voice's cabinet supply, the Scotts searched extensively throughout Europe until they located a commensurate shop in Estonia. Kevin explained that after the initial prototyping cycle with their new supplier, these Baltic cabinets are now the very best they've ever worked with. 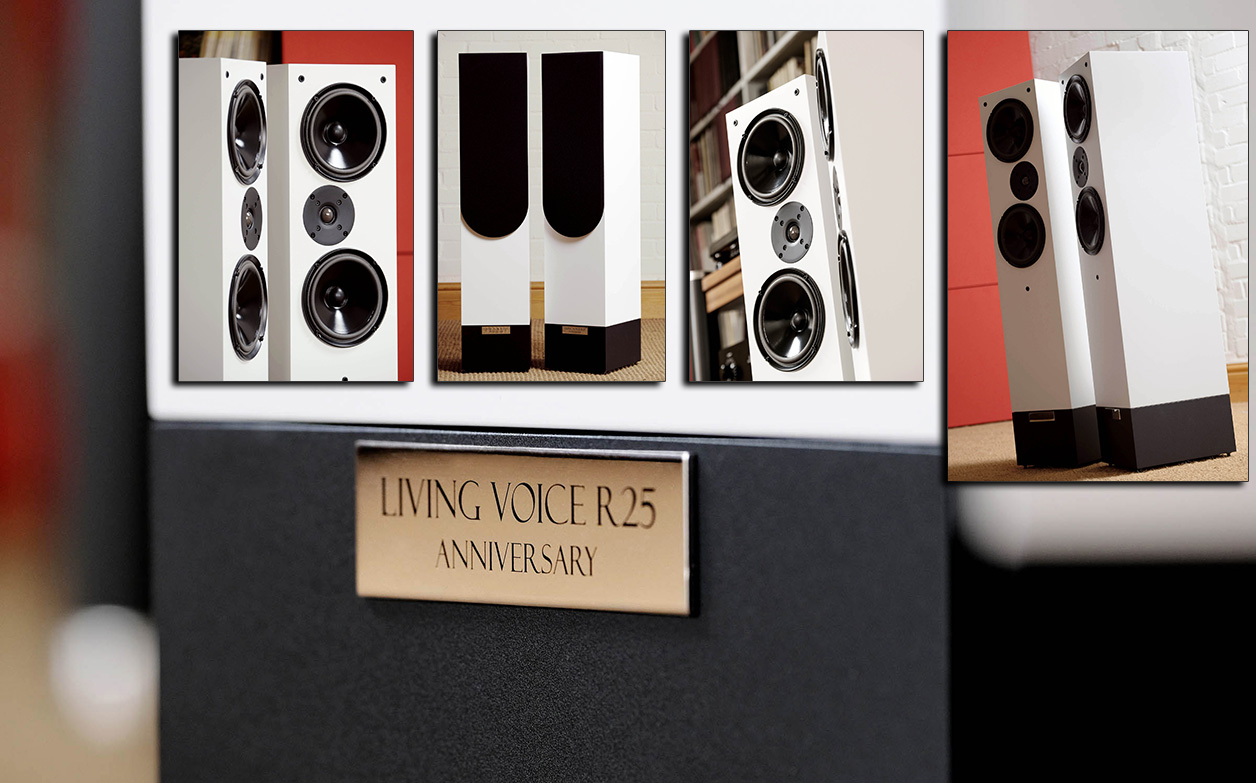 They consist of 18mm constant-density chip board which packs soft-wood particles of irregular size into resin. This assembly is then backed not by standard paper liner but quality maple veneer. The outside gets the veneer or paint of the client's choosing. Only the back panel with the biwire posts is MDF. Full-on MDF sample cabs sounded heavy and dull by contrast. Kevin shared how they actually listened to prototypes with chip board of many different densities; to versions with the single MDF panel as the front baffle; with going to all Baltic birch ply for additional variations. He explained how different species of liner veneer sounded different, leading them to the final maple. Whilst looking deceptively simple, everything about this speaker's physical makeup is the result of comprehensive consolidation and consideration over 25 long years.