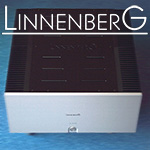 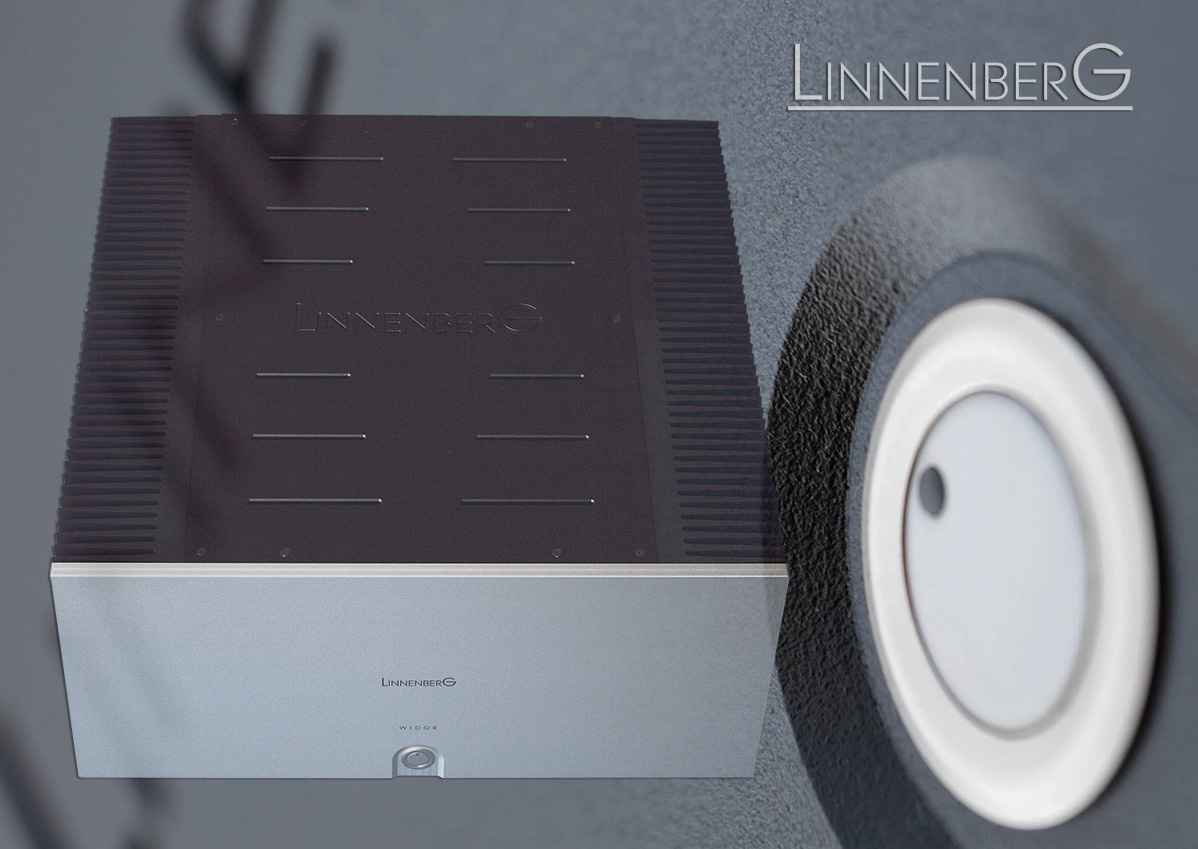 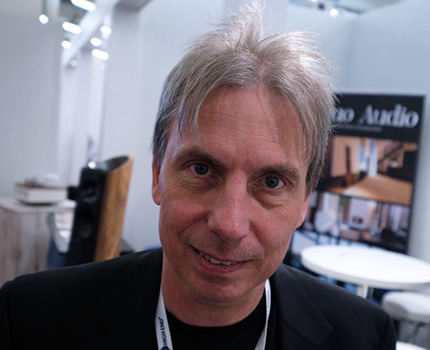 March 28th, 2018. Conversing with Ivo Linnenberg [photo from HifiKnight's show report] whilst prepping for my review of his Liszt mono amplifiers, I learnt of his forthcoming Widor stereo amp.

"Sheer output power was not my design goal. In fact, Widor will have somewhat less power than Liszt. As you know, the lateral Mosfets of my Allegro/Liszt—or Bakoon, Goldmund, Kinki Studio, Nagra—sound so incredibly fine because they're so ridiculously fast and linear. Very low and particularly linear capacitance between drain, source and gate is the main reason. With most if not all other Mosfets, this capacitance which is unavoidable in any semiconductor is extremely voltage dependent. That introduces much unwanted distortion especially at high frequencies.

"Yet there's a drawback with these lateral versus vertical Mosfets and bipolars: their impedance is higher. That makes it difficult to build a brute-force amplifier with these otherwise very fine parts.

"To cut a long story short, I wanted to address this with Widor so I doubled up the output devices, used fully regulated supply rails even for the output stage, incorporated a beefier driver stage, used 240'000µF of storage per channel (twice that of Liszt, quadruple that of Allegro), employed a new fully discrete input stage as part of the so-called instrumentation amplifier and increased the quiescent bias current leading to larger heat sinks."

The reason I became privy to Widor early on was my expressed interest in trading up from our original Allegro to the Liszt. Ivo wanted me to have all the options and not learn of this forthcoming stereo amp after the fact should it match my needs even better. Never mind, I acquired the loaner pair of Liszt monos which I knew and loved, shipped back the Allegro twins and settled the difference by bank transfer. 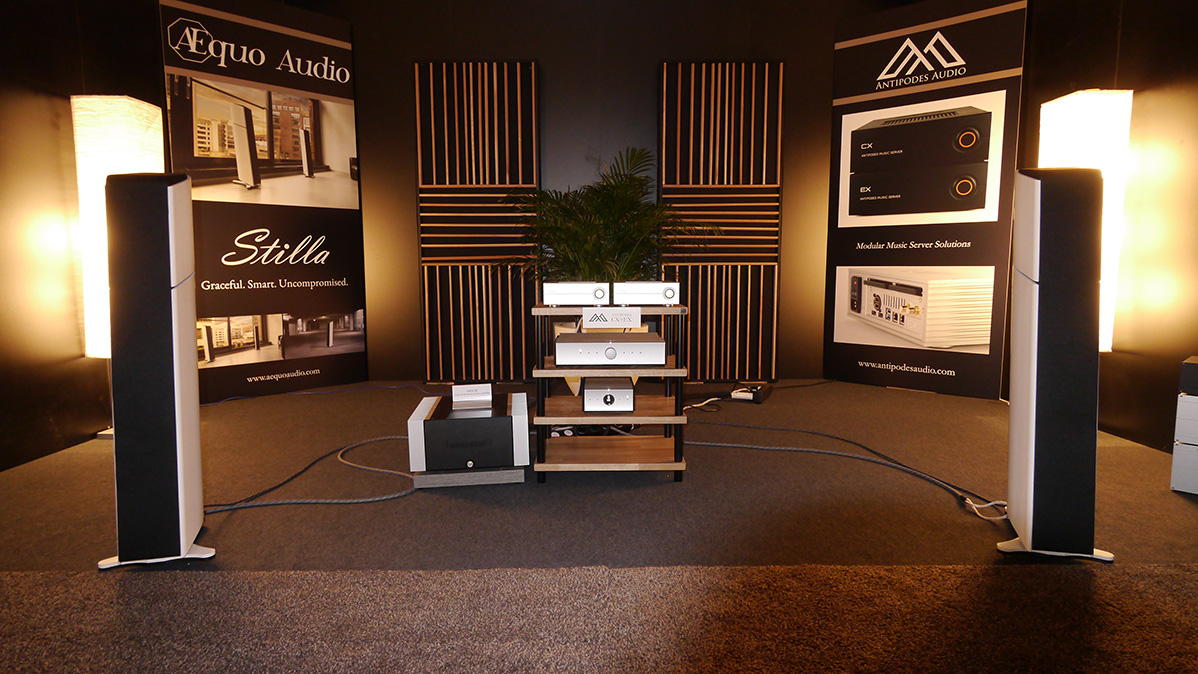 With Æquo, Antipodes and Mola Mola at HighEnd Munich 2018

… … you preferred one not two chassis; chased even better sound (or so Ivo and pricing promised); and had speakers which play at 2Ω for much of the time? Being bridged, the Liszt's two halves would see such loads as 1Ω. They'd stress. With twice the number of output devices, Widor delivers similar yet unbridged power. It snacks on 2Ω all day long. With a single chassis and power supply, Widor also won't dig as deep into the wallet as two equivalent monos. So Widor, whazzit gonna be? Hit a 32-foot long pipe for 16 Hertz phantom vibes? That would be à propos. Namesake organist and composer Charles-Marie Jean Albert Widor (1844-1937) became most famous for his 10 organ symphonies. With a pre-production casing at the Munich show, I'd simply have to wait for full production to commence. 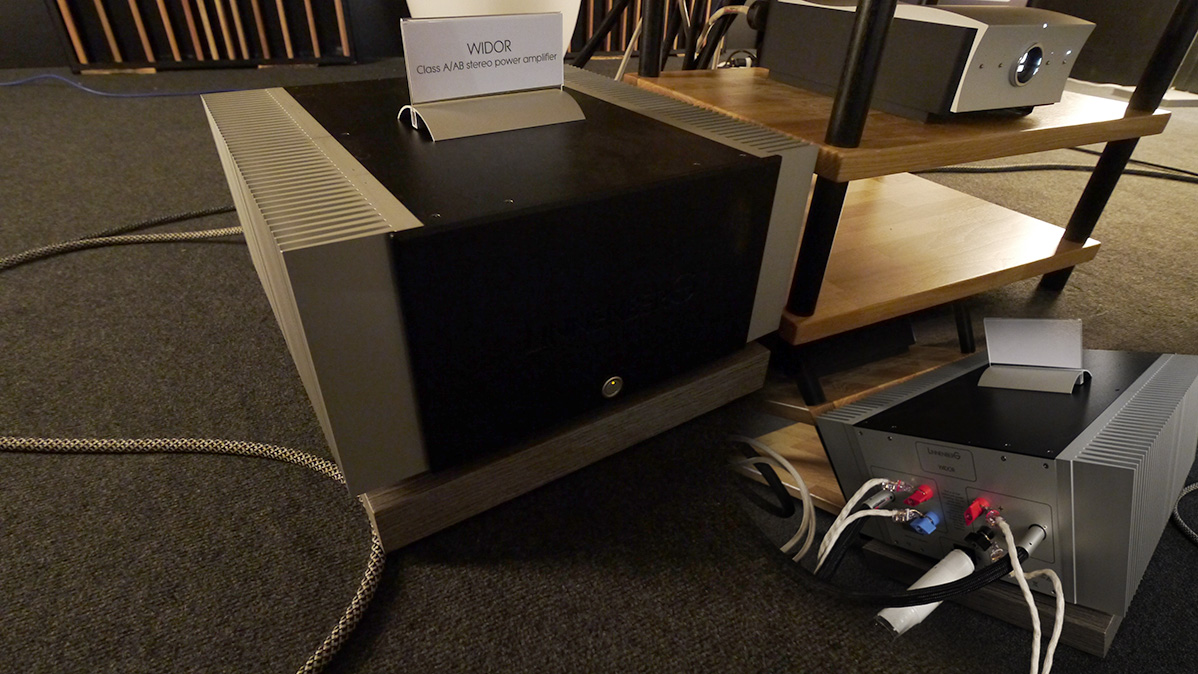 July 13th was a Friday but Ivo's email was anything but hexed. "Two months have passed since High End Munich. The Widor prototype has undergone extensive testing and runs faultlessly to my complete satisfaction. It turned out that no electronic parts will be changed compared to the prototype displayed at the show. Now it's high time to go into production. My estimation that two to three months would be realistic to get you a review sample may have been a bit optimistic.So I want to let you know that in about 6–7 weeks from today, you will get your Widor for review." I was in no rush but appreciated Ivo's professionalism at managing expectations and helping me lock down my schedule.

When asked about a prelim render or sneak photo, "I haven’t got a picture or CAD render because a) production parts are not available yet and b) I do not work with 3D tools for mechanical engineering. Although very neat, these modeling tools are very time-consuming to work with and not worth the effort compared to other CAD tools I use for electrical engineering. So a little explanation must do instead. Basically not much alteration. The dimensions stay the same. The heat sinks will be of much better quality and black anodized. The top plate will stay matte black, now having the logo engraved and some holes for venting. Although technically unnecessary, the holes brighten up the appearance. The front plate will be different in that it is made up of 10mm clear-anodized aluminium and stretches from one side to the other to better fit to existing gear and make it easier to design a companion preamp."

By August 30th, I had a ship date for September 15th. Widor was about to give his first concert in Westport. "Science is not only a disciple of reason but also one of romance and passion." – Stephen Hawking. "In a figurative sense, well-conceived audio electronics too should be disciples of reason but equally, of romance and passion. Therefore, specifications are not the most important factor in creating fine audiophile gear. But strictly neglecting technical aspects isn't the right way, either. Our motto is to make every single spec at least 10 times better than what is actually required and finding a perfect harmony. It is absolutely worthless to offer a product which shines in one or two aspects but fails to deliver in other areas. Yes, the human ear is always the final judge but not as a cheap excuse for flawed engineering." – Ivo Linnenberg 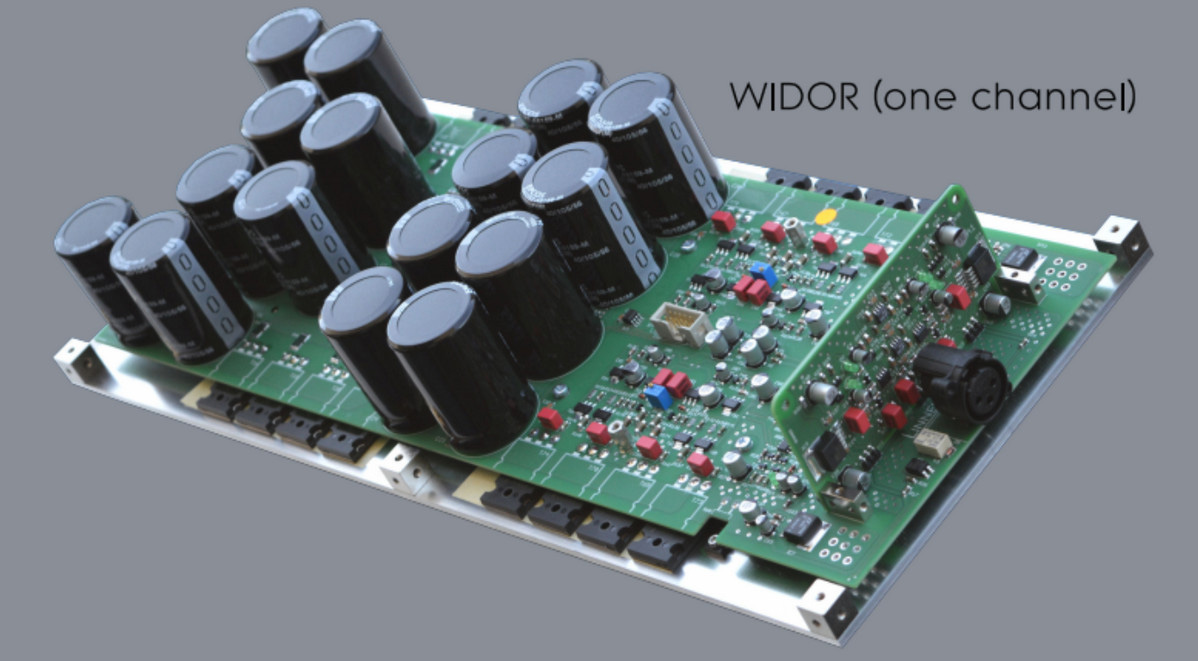 In a follow-up email, Ivo explained that "the intended unit can’t ship because of a serious problem which very unexpectedly showed up with the mains transformers a few days ago. Sourced from an EU-based supplier, quality is far behind expectations and definitely nothing for Widor to use. Like for the Munich sample, now the transformers are sourced from the renowned Noratel company again. Although ordered some days ago, they will need these extra days for manufacturing and air shipment from their Sri Lanka plant."

This behind-the-scenes notes speaks to the subject of reliability. It's perhaps the core reason why certain parts vendors dominate to have their components factor in so much competing gear. Whilst more cost-effective alternatives may sonically or on specs be the same perfect match, reliability must be the final decider. Where EU, US or Japanese origins used to rank on top, today some of the best loudspeaker drive units are made in Indonesia (SB Acoustics' Satori range); and top iron can come out of Sri Lanka. 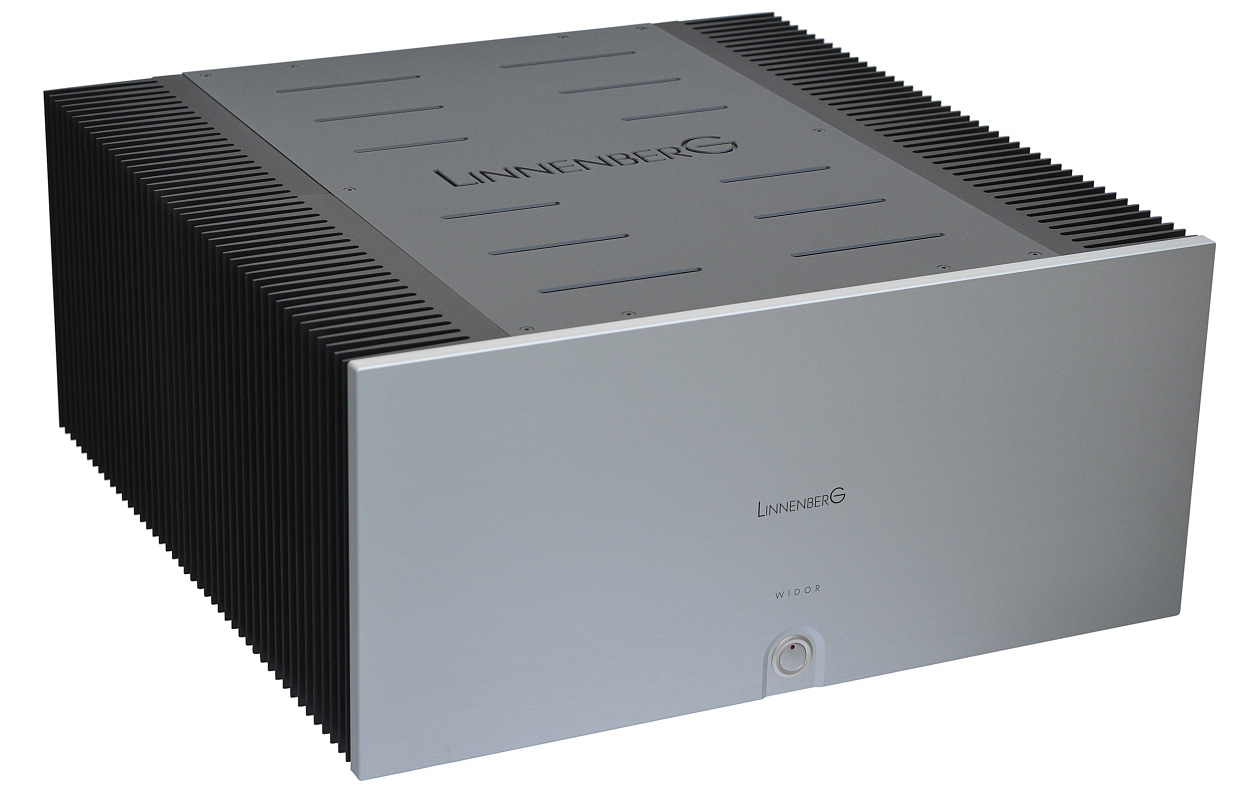 Full stats for the fully balanced direct-coupled Widor are 1.5MHz bandwidth which is only slowed down to a deliberate 0.3Hz-500kHz by i/o filters which account for real-world audio requirements. A-weighted noise of 20µV equates to a 126dB S/N ratio. That's effective 21-bit resolution. "Each amplifier section is powered by high-speed low-noise linear voltage regulators. A tightly regulated supply even feeds the output stage with its high current draw, supplying instantaneous current of ±50A. Supply rails free of ripple and noise are essential for the low noise operation of the whole amplifier. It further helps to reduce distortion and to improve the damping factor.".