If these items strike you as visually humble, the intricate elements trapped inside their transparent rock-hard resin say otherwise. Here it gets really interesting. Each unit's four copper rods undergo their maker's in-house Entropic Process which in effect drastically ages them to create their unique matte look. Most importantly, this treatment changes the conductor's molecular structure to become directional and far less susceptible to micro vibrations, hence quieter. However, such processed copper also becomes limp to resemble overcooked spaghetti if unsupported. Here the resin cylinders step in. They lock the complex but delicate internals into place to create mechanical integrity. Together with the short cotton-clad C-MARC umbilical, they provide mechanical decoupling and increase each module's overall robustness. 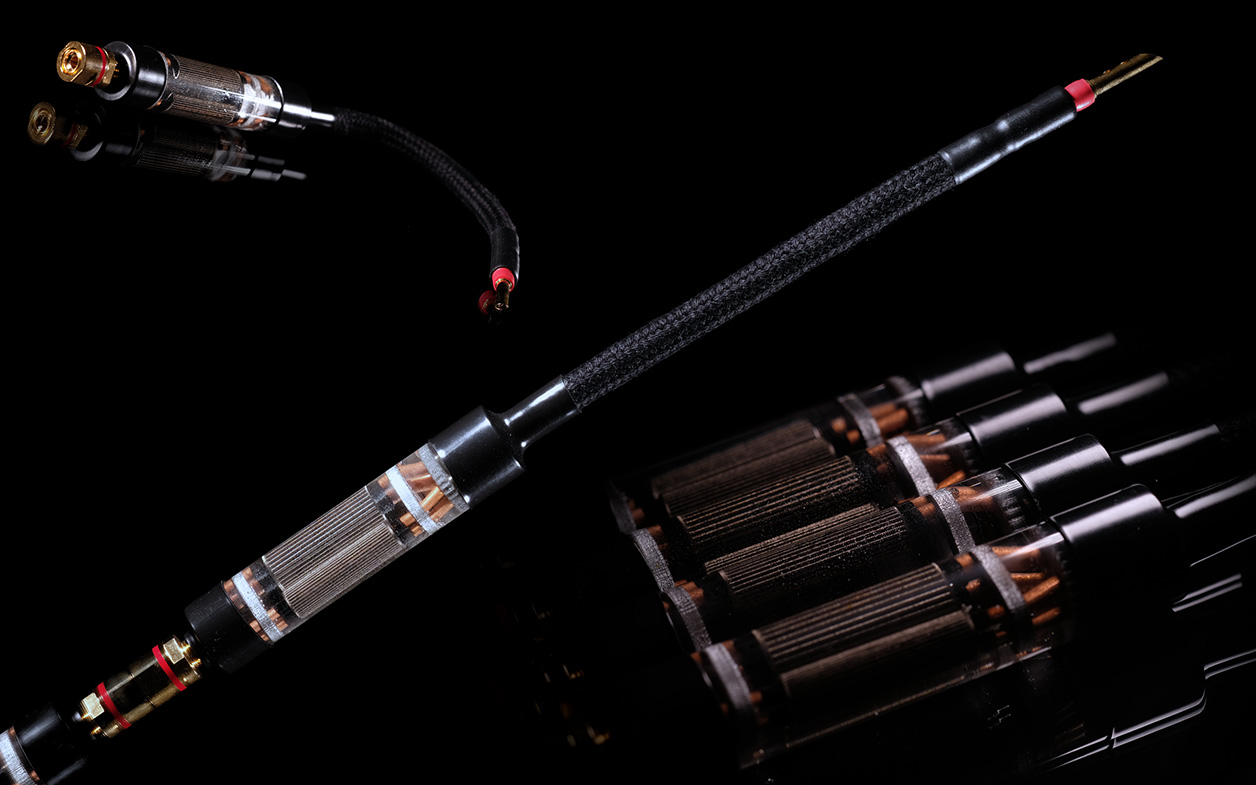 If entropy stands for gradual decline into unavoidable decay, today's treated copper has traded new properties for becoming so old as to easily deform. Think far more than a human lifetime of constant use. Naturally today's item performs in its highest gear right out of the box. Each pair of four internal conductive rods is surrounded by crucial fins as LessLoss' latest Firewall designs. Over the years this in-house tech underwent many iterations to now incorporate a hi-tech process called direct metal laser sintering. This welds alloy powder into 3D objects, conceptually similar to regular 3D printers albeit involving particles as small as 10nm and high-powered ytterbium lasers. The connection between finned cylinders and copper rods isn't physical but based on magnetic fields. Needless to say, all parts must align perfectly to maximize the noise-filtering effect or this fundamental goal is compromised.

A set of four Firewalls for Loudspeakers demands a cool $1'656 which might seem a lot considering such lightweight items. However, this stuff is the result of two decades of extensive proprietary work unlike anything else in the industry. You can't get it elsewhere or assemble your own. Its copper rods alone need 30 hours to finalize their Entropic Process which is almost twice as long as the 18 hours a single C-MARC power cord build takes from start to finish. The transparent potting resin takes another 50 hours to cure and not damage/misalign its delicate internals. Then each rough barrel needs to be smoothed and polished to turn into a finished product. If that's not enough, NASA-level sintering lasers, tightly sealed work chambers and staff dressed in hazmat suits are what it takes to print the finned structures around the copper conductors. I didn't dare ask how much such specialist outsourced labor charges by the hour.

Louis informed me that this project represents four years of work and 80 iterations before repeatable results in line with the fundamental noise-killing concept emerged. That's four springs of burning through cash without getting anything in return. What's more, this implementation is too intricate to cast or CNC. Specialist services capable of welding powdered alloy into 3D structures only opened their commercial gates fairly recently, hence are very costly. All things considered, the LessLoss route leading to this product suggests very heavy R&D. The time has come to report on how it translates at the ear.