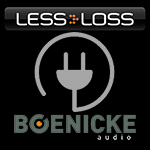 This review first appeared in December 2022 on HifiKnights.com. By request of the manufacturer and permission of the author, it is hereby syndicated to reach a broader audience. All images contained in this piece are the property of Dawid Grzyb, LessLoss or Boenicke Audio – Ed.

Today's anecdote shares a recent experiment which I conducted to satisfy a personal curiosity. It began as a quick power hardware swap whose outcome proved unexpectedly meaningful. Here goes. LessLoss have been busy again. Their intriguing Blackground to shunt tapped AC or DC voltage elements to ground premiered several days ago. A friend of mine got his hands on sixteen of these small squares. He described their effect as "a psychedelic experience of dramatic magnitude". We then saw teaser shots of the first LessLoss power amplifier baptized New Horizons which is scheduled to drop in 2023. We already know that this zero-feedback circuit will generate 35/70wpc into 8/4Ω and look similar to the Echo's End DAC. Interestingly it also covers headfi and exploits 100MHz NOS parts which were originally designed for non-audio applications. When the time comes I'll happily stand in line to sample both of these novelties. For today let's get back at the company's passive power distributor which I recently reviewed. This purist affair turns a single wall outlet into six just like any $5 generic power bar from your local electronics emporium would. On raw utility that's far from unique. However, LessLoss Entropic Process C-Marc wiring and highly efficacious noise-rejecting Firewall bits inside turn this outlet multiplier box into a brilliant performer which stomps on throwaway power bars where it matters most: sonically.

The LessLoss doesn't feature the four captive cords of Boenicke Audio's Power Gate which makes a rather substantial difference on usage and price. Otherwise they are conceptually similar and aimed at enthusiasts who look beyond conditioners. Both share solid wood enclosures, quality sockets, C-Marc hookup wiring, multiple internal Firewall modules and similar sonic profiles with just some minor differences here and there. Since I had both on hand, an opportunity revealed itself. I intended to plug one into the other to power my setup with enough C-Marc power cords to do the job. If you wonder why, blame the integral Firewall modules. These universally applicable parts are endlessly additive by nature. I wanted to know whether their action inside two power distributors in series would net useful gains; or not. Would silence square?

Prior to the Boenicke's arrival, a GigaWatt PC-3 SE EVO+ had been my power delivery box of choice. It's no secret why the Evo then had to step down. Full-fledged active AC filters have a reputation for being slowpokes versus passive high-performance power bars that shun all caps, coils and PCB. After guesting several active filters, I can only agree. They're not quite as ripped, controlled and quick though can be excellent for color, roundness, mass and background inkiness. If I had a thin, lit-up, overly exposed system in dire need of textural qualities, bloom and softness, I'd gladly continue using a classic active conditioner to remedy these issues. If such a product connected to a wall outlet is a touch slow already, adding more would almost certainly obstruct current flow and dynamics further. Or so I thought. A single standalone Firewall 64x preceding the aforementioned Gigawatt then proved me wrong while a year later, specialty Firewall cylinders further reinforced the point hanging off the back of loudspeakers; or even building into them. These experiences explain why multiple external and internal noise-suppressing LessLoss Firewalls are now mandatory chez Dawid's. Without them my sound would suffer. In fact, I'll gladly welcome ever more of them as long as audible benefits follow on. If reaping them means slaving together two Firewall'd power bars, so be it. The ends justify the means no matter what. But would they really? That probably depends on whom we ask.

Today that's me. Prior to any comparisons, I had to isolate my setup's performance with just one distributor before I added another. All components had to power down after each swap so convenience wasn't on the table. I used just the minimum hardware to make sound: ISOL-8 Prometheus PSU, Innuos Statement server/streamer, LampizatOr Pacific DAC, Enleum AMP-23R, sound|kaos Vox 3afw monitors. Initially I wanted to listen to this fronted by the Swiss distributor, then add the LessLoss box before it, listen again, remove it then repeat for as many times as necessary. But that was a hassle. Since digital products are most susceptible to power changes, I narrowed down the swaps to just the Pacific DAC. That way I could turn off/on just one product instead of four and still get results. So the Boenicke Power Gate fronted my setup as per usual but also connected to the LessLoss distributor via short C-Marc cord while my DAC saw a 1.5m C-Marc cable that went to either box. Now I could fairly effortlessly investigate how the Pacific DAC worked fronted by one distributor then two. The cool part was that the Innuos instantly recognized the LampizatOr's USB receiver so total downtime between swap was less than a minute. Just three rotations sufficed to wrap my head around easily traceable, significant sonic shifts. Their rather surprising magnitude is why I penned this short follow-up.