Unless this amp encounters a fault condition, the only lights you'll ever see are orange for standby; and green for operate. After the associated function appears spelled out across the display, that text extinguishes and you're left with just one small not overly bright LED – perfect for seeing status at a glance without intruding into night-time ambiance. 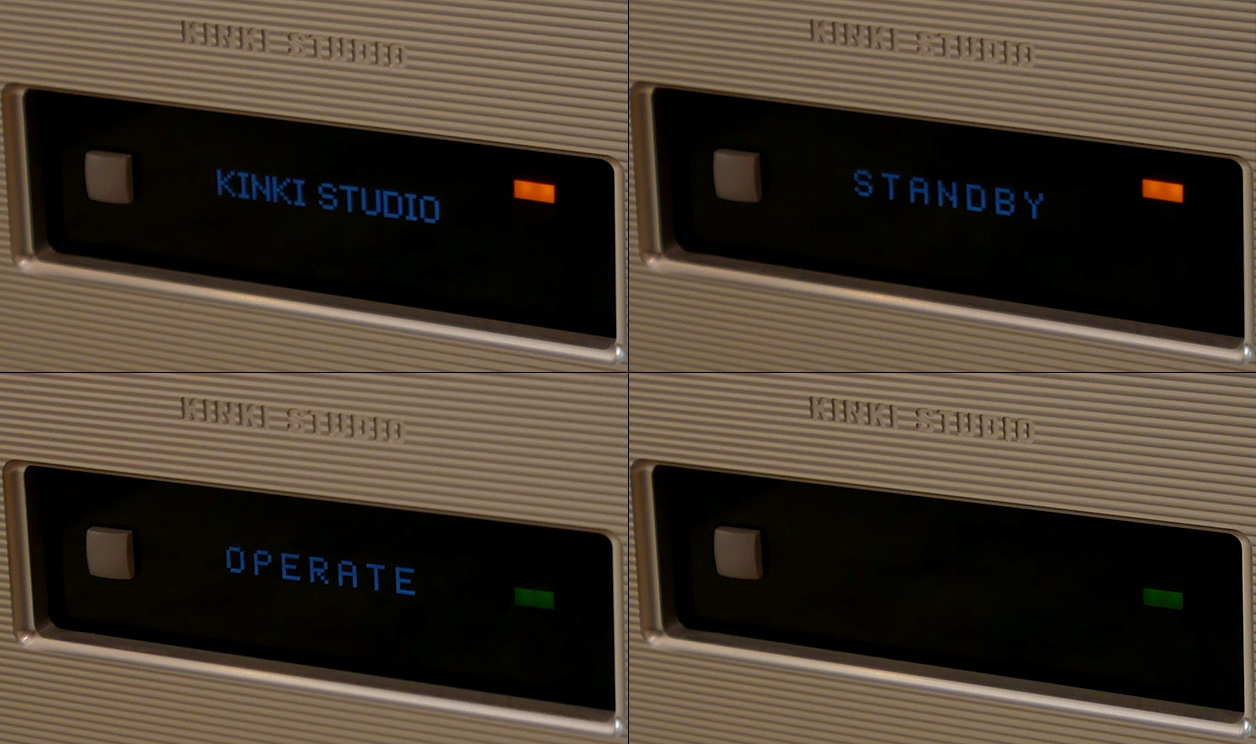 To clock a few coming-home miles, the EX-M7 replaced our €8'500/pr LinnenberG Liszt in a system of iMac ⇒ Audirvana 3 ⇒ Soundaware D300Ref ⇒ Denafrips Terminator ⇒ Vinnie Rossi L2 with Elrog ER50. AC/DC conditioning was by Vibex, cabling by Allnic except for one LessLoss C-MARC Entropic wall connection and a Titan Audio power cord for the second wall outlet. Equipment support was by Artesanía of Spain. Speakers were Aurai Audio M1 with external crossovers from France.

Setting today's table before serving this meal, you need my bigger picture. In what I informally call the 'Swiss' school of amplifier design for its emphasis on speed and clarity à la CH Precision, Goldmund and Soulution, the now discontinued Job 225 set the basic blueprint. More refined and powerful, the Kinki EX-M1 occupied the next level up. Next come our LinnenberG Liszt, finally our Bakoon AMP-13R. Merrill Audio's Element 114 and AGD Production's Vivace visiting for reviews fell somewhere between LinnenberG and Bakoon. It was a given that the EX-M7 belonged to the same design DNA. My question was, how high up? The French speakers were still concluding their own break-in. Then a pair of Spanish Sotto Voce active towers were in my first-come first-serve queue. Right then, the Kinki had to hoof it upstairs. It'd settle into a system where it was the only variable until downstairs opened up again around our Audio Physic Codex. Allowing myself a first sneak peek, the combination of Kinki/Aurai was unexpectedly generous and lush. Having sampled the speakers on our own amps already whilst waiting on new crossover parts, I attributed that to their initial voicing. To extricate what the amp did, I really needed well-familiar loads first.

Upstairs started with a Soundaware A280 SD card transport. That handed digits via coax to an already reviewed JAVS digital stack of X7-DDC Femto, X7-DAC MQA and Clean Power super-cap/battery supply. The DAC's analog output supplied our Nagra Classic preamplifier. That handed off to our Bakoon and big Zu Submission sub. Speakers were our Acelec Model One, 6½" 2-ways in an aluminium enclosure with stacked 1st-order filters, rear port and Mundorf AMT. A pair of Franck Tchang omnipolar super tweeters top them like foam does espresso. Here the EX-M7 would go mano i mano against our household's very best amp. At exactly half its coin but 10 x the power (!), on paper the Kinki won before I ever hit 'play'. However, this rig in a 4 x 6m room doesn't require more than the 25wpc of the Bakoon. This duel wouldn't be about raw power and quantities. It'd be about refinement and qualities. In such scuffles, small and adroit often beat big and bruising. 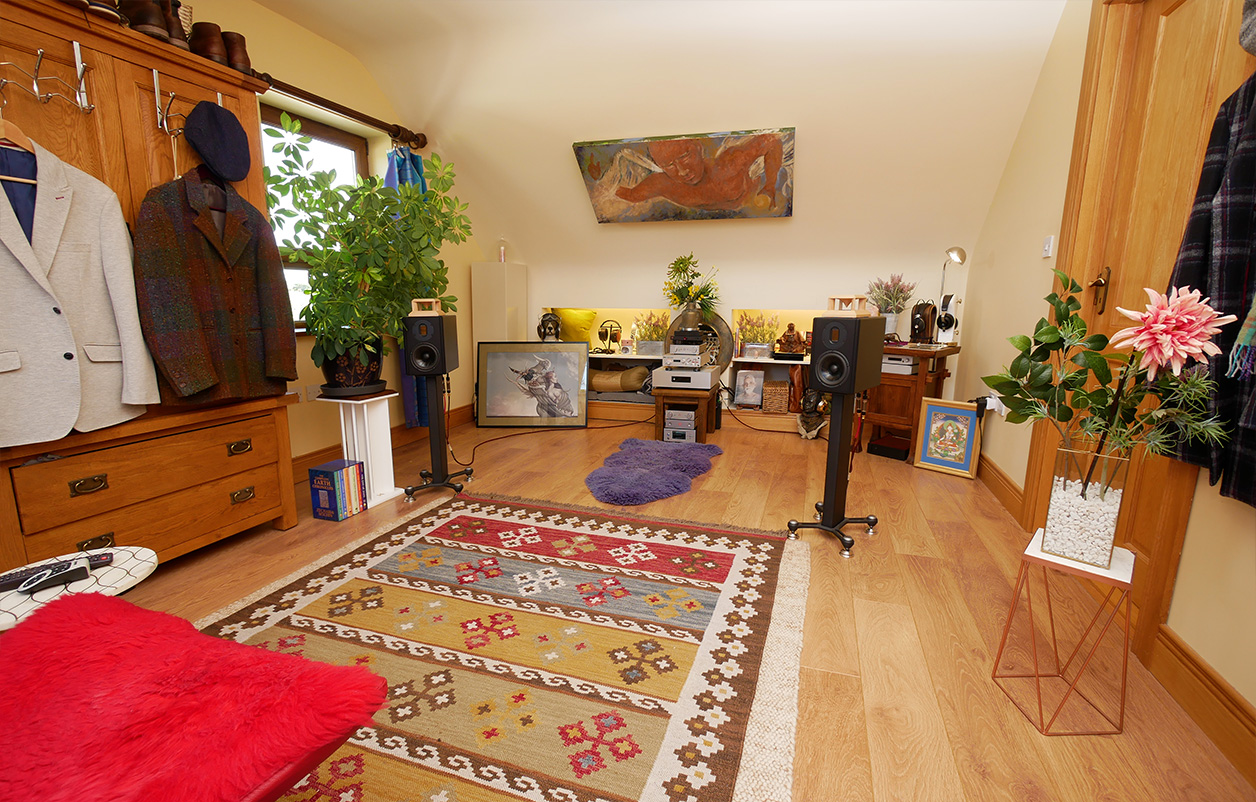 Before I could press 'play', I had loud hum. Before I could cuss a fitting curse, a flick of the ground-lift switch stifled it. Curse swallowed, silence perfected. With a subwoofer to complixifunk this setup, ground loops get more likely. What a relief to have a solution as convenient as Kinki's. It saves one from moving from component to component with a 3-to-2-prong power adapter. 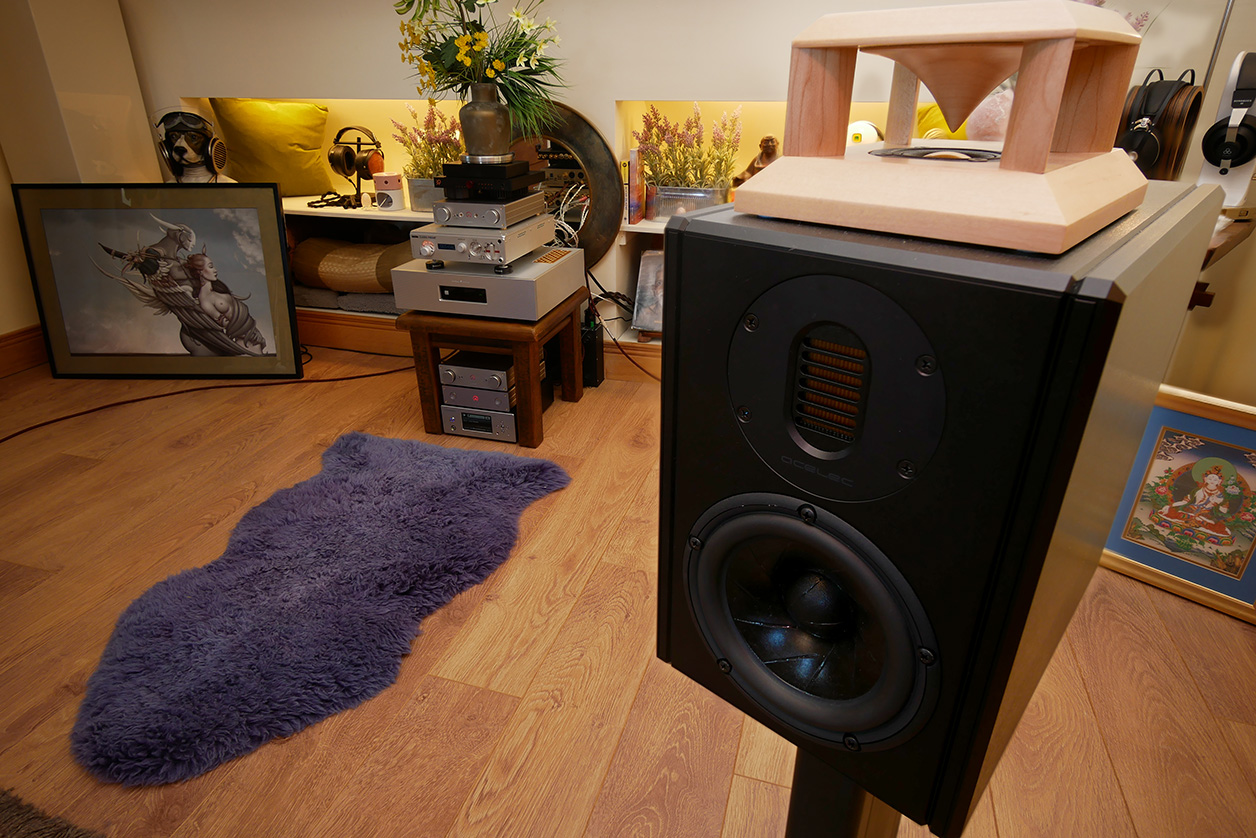 I was all set to witness the first round of my Kinki/Bakoon tango. They actually share the same Exicon Mosfets. The EX-M7 simply uses twice as many.