Susvara. In our headfi collection of 2018, these top Chinese planarmagnetics play inverted trump or Antichrist to Sonorous X's drive friendliness. If Final and HifiMan apply equal bench parameters, the difference in sensitivity is a staggering 20dB+! Without digital pre-attenuation, this equalled a thirsty ~2:30 on the knob, leaving leeway up to 6:00 unless tracks were recorded very low. Then I could max out. As a rite of passage, Maggie lovers discover that when their notoriously power-grabbing panels are eventually fronted by higher low-impedance power plus stiffer current, their signature quickness, coherence and micro detail get a big boost on overall gravitas. Now meat and dynamics show up in full. The same applied with THR-1 over how Susvara can present on lesser amps. These planars suddenly express more of the attributes of top dynamics. A lovely benefit was reduction of recorded artifacts. Whilst mostly unnoticed over loudspeakers, they can scatter out from under the rocks once high-resolution diaphragms mere centimetres from one's ears shut out room noise for higher magnification. These are things which distract from musical enjoyment. They were never meant to be exposed. Liu's voicing remained mindful thereof. This was back at adroitly balanced voicing. It sets its resolution level to that of a good speaker system, not an unnaturally explicit ultra-efficient IEM. With its fully developed lower octaves and image density, It also compensates some for the relative lightness of the headphone experience. After all, that works with small drivers inside or on the ear canal. Even at the (out)size of Susvara's membranes, those drivers lack the air-motion scale particularly at low frequencies where full-range loudspeakers immerse our entire bodies in big shock waves. 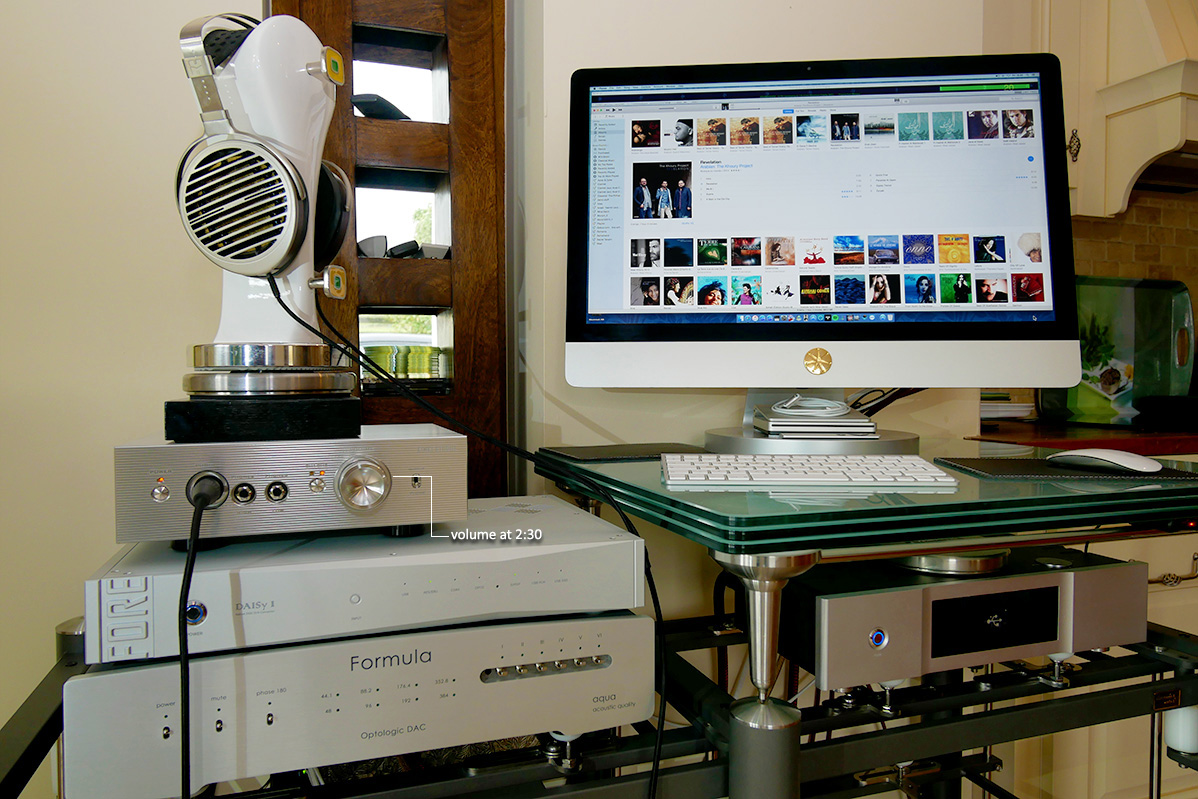 With its goosed power rails, THR-1 was mindful of that. Rather than go after the microscopic stuff where headphones excel already, it improved their macro sides where they're inherently weaker. This shifted away from even more detail to instead build out body, density and weight. That's what pursuing more powerful amps within otherwise equal catalogues tends to buy: bigger more robust sonics fully incarnated, not outside their body like see-through ghosts. With sufficient gain for Susvara, THR-1 should ace most all commercial headphones. The Kinki thus is a muscle amp for headphones, transferring on them all the usual advantages for which muscle amps are known: more gravitas, stronger lower bass, deeper colours, higher density.

Nowhere was this more demonstrable and transformative than on Sennheiser's HD800. WIth their stock harness, I find them guilty of presence-region brightness. It recalls untamed Lowthers. As the most sensitive range of human hearing, it prompts a sense of enormous resolution, informativeness and presence. At the design's degree however, it border on/veers into the sizzly to fatigue quickly or eventually. Those particulars depend on your own ears. Meanwhile over THR-1, this issue was—HP magic wand 'disapparate' like—gone. What's more, in the bass the HD had grown a new set. This evened out their signature airiness/spaciousness at the opposite end. With it, the original forward lean on transients had relaxed on the back foot. This gave more room to sonic bloom. It no longer emphasized the leading edge. The centre of gravity was lower. With it, timing relaxed. Instead of feeling charged like loudly snapping fingers, it now was easier like nearly imperceptible head nods. On our resident amps, the Sennheisers even with their aftermarket Forza Audio Labs cabling play distant second fiddle to Final's heavyweights. Hence they hibernate in a closet where other hardware benches until a particular assignment calls them out. The leaner COS and Questyle decks pursue higher speed to be at minor cross purposes with my idea on what makes for an ideal HD800 sighting. Having heard THR-1's countermeasures, I suspected a perfect match to retrieve the 800 from under the stairs. Now I witnessed that the Kinki could move them beyond where I thought they could go. Transformative indeed and perhaps the best example to capture what Liu's circuit tuning is all about. The last amp that had massively flattered the HD800 was Goldmund's first Telos [8'600 Swiss]. Reviewed too far in the past for anything more specific, at 1/10th the sticker, THR-1 on that score was simply extra impressive. Or as Alvin added once the review was live, "coincidentally, a customer who uses HD800 with his THR-1 swears by the combination as something he'd been seeking for a very long time. Glad to know that the HD800 finally found their soul mate." 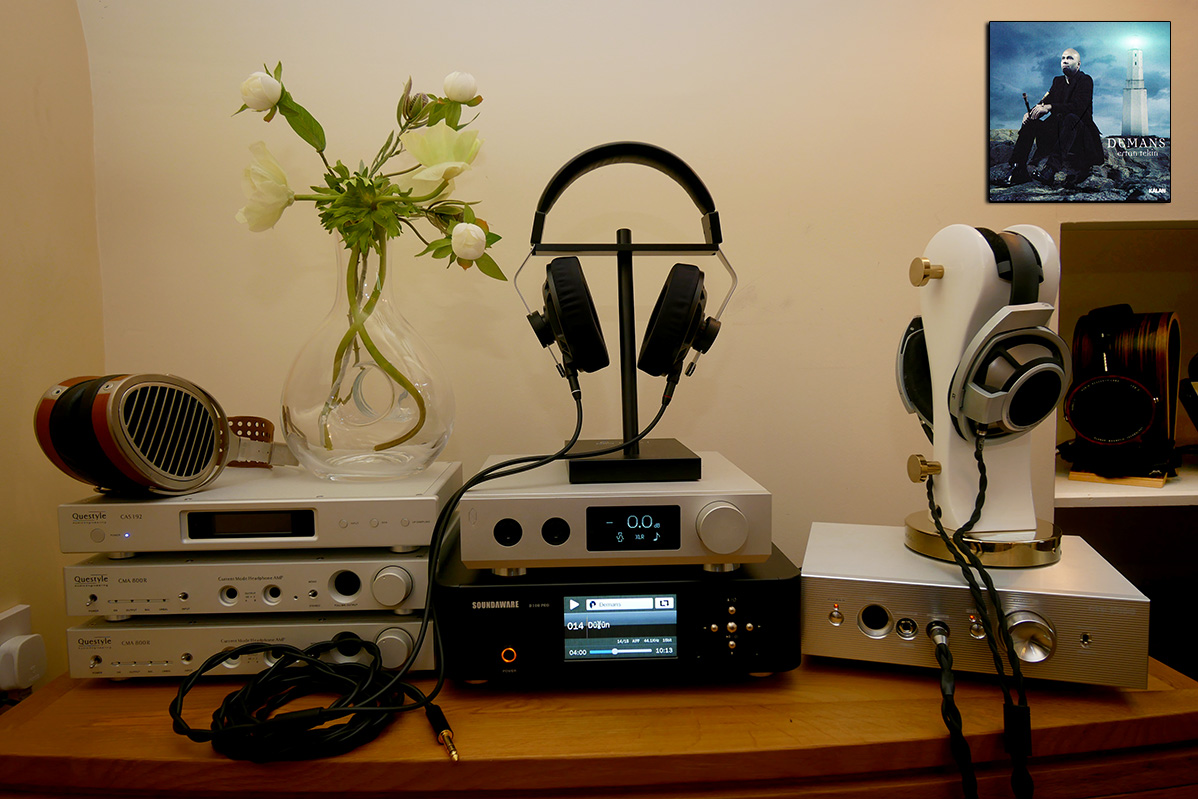 Final's D8000 planars whose stock cabling I find too bassy naturally underwent the same treatment. My compensatory ALO Audio wiring for Final is simply terminated 2 x 3-pin XLR to not work on the Kinki. I'd have to get the equivalent ¼" version to open up their treble again. Inherently dark rich loads like our pre-Fazor 'chocolaty' Audeze LCD-2 indulged their sumptuousness with splendid control and fabulous grip but also acted darker than they will off the CMA-800R monos or H1. HifiMan's HE-1000 again played in the sweet spot of Liu's voicing as Susvara had done already. Ditto our Beyerdynamic T1. Like any component does which exerts a particular action—call it effect, voicing, tuning—it benefits certain kit more than others. By implication, it can also pull in an unwanted direction. If you think specific planarmagnetics opaque in the treble to wish for more top-down illumination, Kinki's muscle amp won't do what our resident amps do. It's why I ended up with these particular amps in fact. Two planars from Audeze, two from HifiMan and one from Final had displaced dynamic headphones on my most-used list. Were I to listen primarily to our dynamics of AKG K-702, Beyerdynamic T5/T5p and Sennheiser HD800, I'd have ended up with a Pass Labs HPA-1. Now I could add the THR-1 to that very short list. With neither HE-1000 nor Susvara falling into my dark-planar drawer as particularly the LCD-2/LCD-XC and MrSpeakers modified Fostex do, the Kinki remained all beneficial. It didn't steal from Dick to pay Harry. But its most spectacular makeover was really with the HD800. Those expressed true "I haven't met you before, have I now?" shock value. Into their 300Ω impedance, Liu pushes a stout 2.2 watts. Here many competitors move their decimal point one over to the left. If executed like Kinki do it, power doesn't corrupt but triumphs. 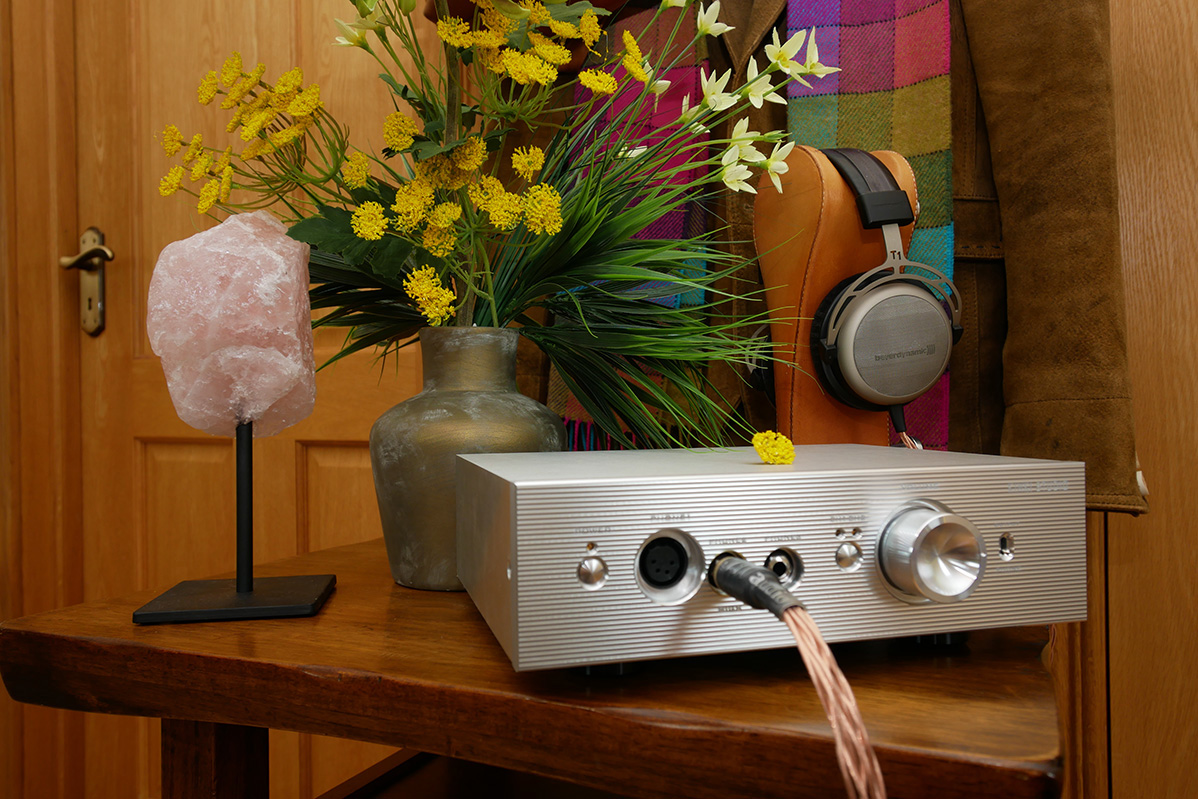 In conclusion, Kinki Studio the brand had been news to me until a few months back. Now it clocked already the second heavy hitter whilst the EX-M1 was still memorably in my rear-view mirror. Like my closing shot, Liu's THR-1 is strong on colours and earthy robustness which here is symbolized by rich wood tones rather than shiny chrome or hard glass. Photographing the amp in very soft focus indicates that it's not about close-up details but the stuff behind them: tonal weight, foundational power, colour saturation and a milieu of organic warmth. It's another strong recommendation for the faraway house of Kinki who to this particular sonic tally once again add strong build quality and lovely high value. Were THR-1 not made where it is and not marketed in quasi-direct fashion at lower than fashionable margins—fashionable for distributors that is—it should sell for a lot more. Add Alvin Chee's excellent reputation for customer service and the exclusive Kinki Studio/Vinshine Audio connection is a real win for prospective customers no matter where they email in from. Within the global village concept, Kinki's THR-1 hits high marks all around to play small disruptor to the high-street scene were fatter double margins are the routine to keep doors open. And yes, that means you have to trust more in reviews since you can't presample THR-1 at dealers. But I'm sure more reviews including owner feedback are in the works to help spread the word. For now, you already know what I thought. That should be a decent beginning.