Housekeeping chores. With its high power, owners of mega sensitive headphones would want to be assured of total absence of noise and reasonable travel on the attenuator. Our flagship Final Sonorous X—a 50mm dynamic in a very heavy all-metal body with a 16Ω impedance and absolutely cracking 105dB sensitivity—already bled through slightly on 'mute' when the Alps pot sat fully counterclockwise. Off a standard source, I had one centimetre of travel to reach desired levels. To get to 9:30 required 20dB of signal cut at the source. I did this in either Audirvana's 64-bit dithered digital code in an iMac; or on the H1's own analog attenuator. For loads of uncommonly high sensitivity, Liu's chosen Alps came on fast and furious. A shallower taper would be better and give more gradations before going too loud. Also, in two different systems to eliminate ground loop as potential cause, I had faint steady-state background noise. It was slightly lower on the high-impedance 6.3mm port. It was independent of the position of THR-1's volume. It was faint but present, hence not dead quiet. On headphones of more common sensitivity specs, it became inaudible. On Sonorous X, it was present. Owners of hi-eff speakers with zero NFB single-ended triode amps often tolerate significantly higher background noise because they otherwise love the sound of their amps. Where on the topic you come down I couldn't predict. Liu: "THR-1's faint noise floor is inevitable due to its power rails and output power being far higher than normal. This is especially so when pairing headphones of low impedance and high sensitivity." Still, the hum/taper twosome made the Sonorous X not ideally served. I'd still use it to confirm sonics but then with a 20dB cut upstream to unthaw the Alps out of 1st gear. Global warming and all that.

Sonic coordinates. Before digging into minutiae, my first instinct with any new component is to establish where, roughly, it belongs on the sonic map. As with cuisines, many different flavours exist. Before one proclaims one restaurant better than another or describes its unique style, it's vital to specify whether they serve Nepalese, Italian or Thai. If not, there's no sense comparing kitchens as divergent on ingredients as an Argentinean open-flame steak house and a Chinese noodle shoppe. Likely because I'm a fan of and so familiar with Exicon's lateral Mosfets, my first but persistent take was "it sounds/feels like our speakers". Many headphone amps punch up detail to well exceed what even a superior speaker system can do. THR-1 did not. Obviously the headfi concept of music inside the head was as different as it always is from sound that first propagates through a room. Still, the sonic flavour and style reminded me instantly of Exicon speaker amps we either own or which I reviewed. Hence the déjà vu. I felt right at home. Like slipping into a well-maintained boot, I was comfortable and very familiar. Of course it's not every day that the output transistors of some of one's favourite amps show up in a headphone amp. Not Bakoon AMP-12, LinnenberG Liszt or Kinki EX-M1, the implementation of THR-1's Mosfets most strongly spelled out 'Classic Amp'. That's Nagra's stereo amp in their Classic range. In restaurants, identical cuisines serve different takes on traditional dishes. If their chefs are equally talented, it's not about better or worse but just different. Same here. Within my small lateral Mosfet corner of the audio world, THR-1's profile had its own flavour.

This was different than the EX-M1 stablemate's. That 200wpc integrated sat close to the Bakoon/Crayon/Goldmund/LinnenberG polarity yet overlapped not fully. That was due to mildly added warmth. It injected some class A Pass-type weight. Given THR-1's Vision prefix and Liu's explanation for why, I had really expected removal of said warmth, perhaps an even deeper push into Bakoon-style turf instead. That I call lit up all over. It's shorthand for a sense of pervasive brightness from which all shadows have been expunged. It's not specific to just the upper bandwidth where it would mean a tonal-balance shift. It's a consistent quality top to bottom. It's fully exposed very high resolution in high relief. As amplifier bandwidth grows, phase shift in the audible extremes diminishes, then dies. What takes its place is translucent bell-like clarity. Not only does that improve treble purity in general, it also polishes up the upper harmonics which embed in all transients. Leading edges then present cleaner, quicker and more precise. This also goes for the bass where pitch definition improves. It all serves crisper timing and benefits image lock since human hearing uses transient fidelity to localize sounds. With one virtue of these lateral Mosfets being unusually low HF distortion to begin with, treble purity was in very good nick already. 300kHz bandwidth—x 10+ the audible limit—exploited it further but avoided any lustrous sheen on the tone textures. 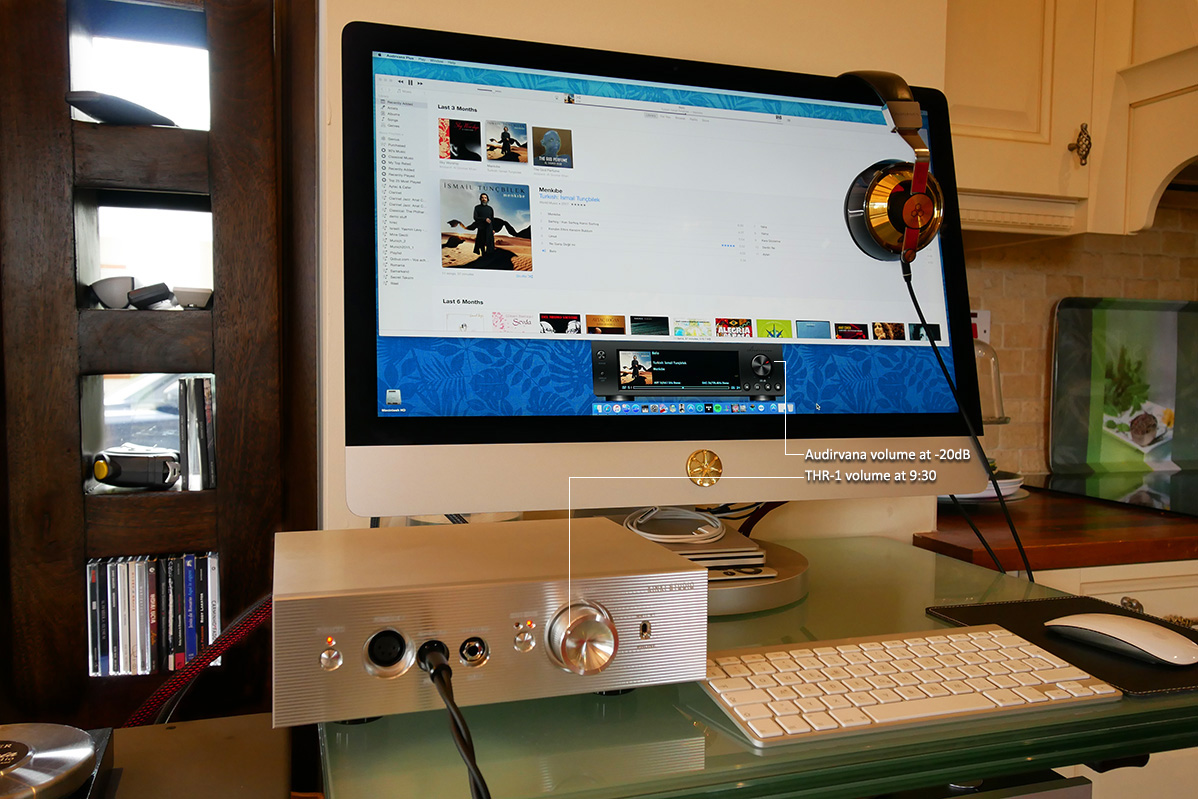 And that was the THR-1. It wasn't as fast, rhythmically tensioned/ratcheted up or high-lumen exposed as the AMP-12R; or even the less-so EX-M1. Instead it was more gemütlich or leisurely. As a result, it also lacked their textural gloss. That I view as the key difference between a glass and plastic-covered computer monitor screen. THR textures were dry but warm and minorly sweet. Hello Nagra Classic Amp. Hello classic class A sound; incidentally without the heat. This casing overbuilt for the job got barely warm to the touch and the output transistors don't couple to it in the first place. Now we've got our "THR-1 was here" on the general map. By not piling more detail atop headfi's already greater detail density over the majority of speaker systems where higher noise floors and lossier distances work against them, THR-1 cast a more familiar 'speaker-styled' reading. How would it behave into various loads; and vis-à-vis our standard headfi amps?