This illustration based on Klippel measurements visualizes the effects of a classic mechanical suspension. 'X' represents the cone's excursion in millimetres and 'I' the current through the voice coil. It is clear how in a classically suspended driver, increased input causes increased albeit nonlinear excursion (the lines aren't straight but curved). In Ilumnia's design, excursion remains linear with increased current in the voice coil. Also clear from the illustration is the effect of the surround and spider on the cone's excursion at very low SPL. The purple curve does not cross at 0.0. It needs 0.1 ampere of current to get going whereas the Ilumnia driver manages with just 0.01A. And that means higher resolution, hence more micro detail.

In the graph the magnetic suspension curve is enveloped by two other curves with the comment 'adjustable'. This is where Ilumnia's external 0.5A current source enters. It's a small metal casing with two knobs at the front and two XLR outputs with an IEC power inlet and power switch at the back. It eliminates the back-EMF of the suspension coil, hence the electrical damping as a side effect of this coil by feeding the electromagnetic field wherein the second coil floats the cone. The left selector knob is for standby/on. The right selector has five positions to adjust the suspension force. These positions allow the loudspeakers to best match a given amplifier's damping factor. An amplifier with a high damping factor matches best with a low suspension setting and vice versa. An ideal match means optimal control, hence better bass response and superior dynamic tracking. To conclude, Ilumina address three common types of driver nonlinearities, two electrical and one mechanical.

In the Magister floorstander, this special free-floating LEMS driver covers a very wide bandwidth of 40Hz to 7'000Hz. At 5kHz, a ScanSpeak Illuminator tweeter kicks in with a 12dB/oct. high-pass whilst the widebander itself is low-passed with a 1st-order filter, no phase correction or notch filter necessary. That tweeter hovers above the floating mid/bass driver in its own bullet housing. In fact, the housing is double. Its inner and outer parts separate with isolating rubbers. Due to the alignment of the tweeter exactly above the widebander's center, its acoustic center sits between just one wavelength at the crossover point. For the filter, Jantzen is the main supplier of high-quality parts. Finally we arrive at the cabinet where all parts come together. It consists of multiple Ply layers CNC shaped, stacked, then aligned with four metal rods and glued together. Four of the 23 slices are more solid than the others and sport asymmetrical holes through their braces. Two solid-wood ports sit at the back. Top and bottom are finished with CNC'd 6061 aircraft aluminium plates. Looking at the result, a certain likeness to the Gamut El Superiore is evident. And wasn't that the starting point of the brothers' adventure? 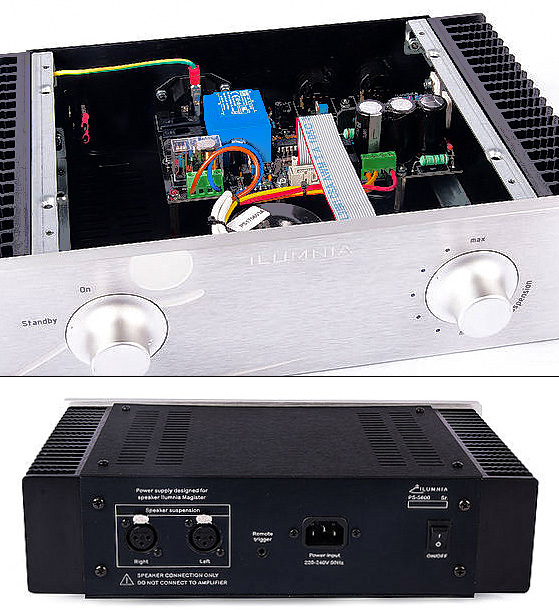 One sunny afternoon, a car with Belgian license plates pulled up at our house. It was Tom delivering the Magister for review. We'd made the appointment during he latest Dutch XFI show where we'd already noticed a change in the Magister from the prior year's first showing. Instead of just two ports at the back, an additional third port now featured prominently on the front.

We received the full set including the power supply and matching power cables. Tom proved to be a catchy causeur with a great juicy Flemish accent and most of the above derived from his telling of what went into delivering our production samples. Tom also brought a pair of pre-production Vocalis monitors just for fun. Ilumnia rate the Magister at roughly 89dB sensitive but with any omnidirectional loudspeaker, measuring that isn't straightforward due to extra room gain.

Nevertheless, we set out composing a suitable setup with amplifiers delivering upward of 20wpc. Our choices were nCore 1200 beta monos, Trafomatic Kaivalya EL84 monos, PTP Blok 20 LM1875 chip-based integrated and Trafomatic Pandora SV811-10 review samples. On the back bench we had a 6wpc Audio Note Meishu running WE 300B tubes. Preamplifiers were Music First's Passive Magnetic, Trafomatic's Reference One or a loaner Trafomatic Lara. Alternately we could adjust volume directly on a Mytek or T+A DAC.

We positioned the Magister with its front baffle at 1.7m from the front wall and 2.8m apart centre to centre. For the directional tweeter, we started with a little toe-in toward the central listening spot. From there, the physical beauty of the design was stunning. The combination of matte aluminium tops and bottoms, light wood and lack of a conventional driver looking at us made the industrial design unique and artsy. We now saw that the cabinet's cross section could be described by four intersecting circles. A small circle carved out the inward curvature of the back panel, a larger circle did the same for the concave baffle and two larger circles described the curved sides: very aesthetic and worthy of MoMa.

Our first listening session saw the Trafomatic Lara/Pandora combination fed from the Sound Galleries SGM 2015 streamer putting out quad-rate DSD to a T+A DAC8. Expecting that the combination would require some aural/metal adjustment as there were unknown components at play, our jaws dropped when there was no need for any adjustment whatsoever. Our first reaction to the music coming at us at a measured 87dB in the seat was an innuendo to Superman: Is it an ESL? Is it a horn? Is it a Maggie? No, it is a Magister! The ease and finesse of disseminating the musical message was stunning. Where some form of distortion can sometimes trigger emotions—faux emotions that is—this presentation felt utterly free of compression and other common restraints. We were completely enveloped and immersed in the music and could even turn up the volume a notch without any negative effects.