The Pro iDSD measures just 22 x 6.3 x 2.1cm WxHxD, weighs 2kg and is encased in aluminium. The cosmetics recall their Pro iESL and Pro iCAN. Wavy top and sides are complimented via openings which form a circular pattern and provide heat dissipation. A round window in the middle protrudes a bit and allows one to see magnified valves. Once these are lit, the look is fabulous. Instead of various feet or bumpers widely used in the industry, the underbelly sports a flat rubbery pad with a round cutaway in one of its corners. Once two iFi's Pro range decks stack, that's where the glass window goes and the two machines line up neatly. I thought this very clever. Once price is factored, the overall fit'n'finish are top notch and the styling is lovely. 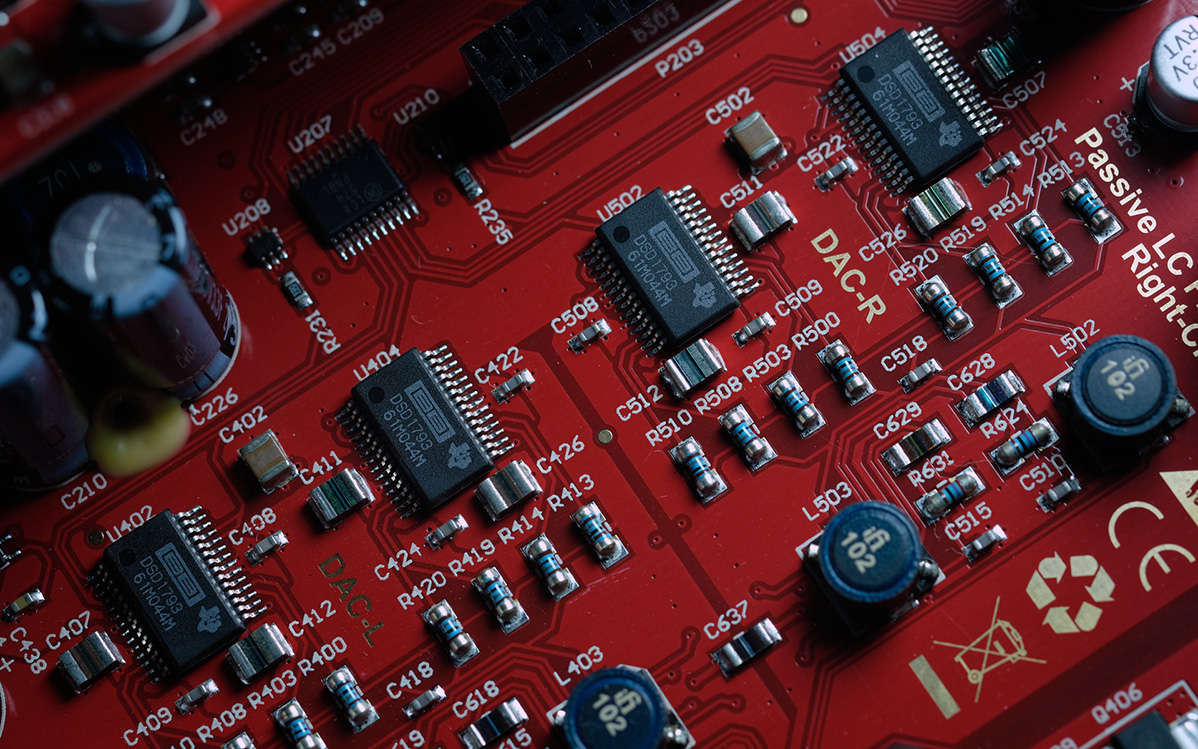 To call the front crowded is to put it mildly. The top left corner sports a nice LED logo, which indicates the operational status in four different colours. A bit below there's the main on/off button and a large input selector sits further to the right. Not turned but held or shortly pressed, it respectively inverts polarity and dims the brilliant OLED display in the middle whereas a small knob nearby sets the product's analog output to one of three modes: solid-state, tube (feedback) and tube+ (no feedback). This feature also found in the Pro iCAN actually is one of the strongest cards held by in the Pro iDSD's deck. Moving on, another small knob allows one to cycle through five different digital filters with various taps and pre-/post-ringing and upsample PCM to 705.6/768kHz in the process. Once pressed, it also enables ‘DSD Remastering' which upconverts all incoming signal to DSD1024. With these digital filter options, a user can have music served as PCM, DXD or DSD and various modes can work simultaneous, i.e. the apodizing filter plus DSD1024 Remastering. Available DSP options and their combinations are generous to say the least. 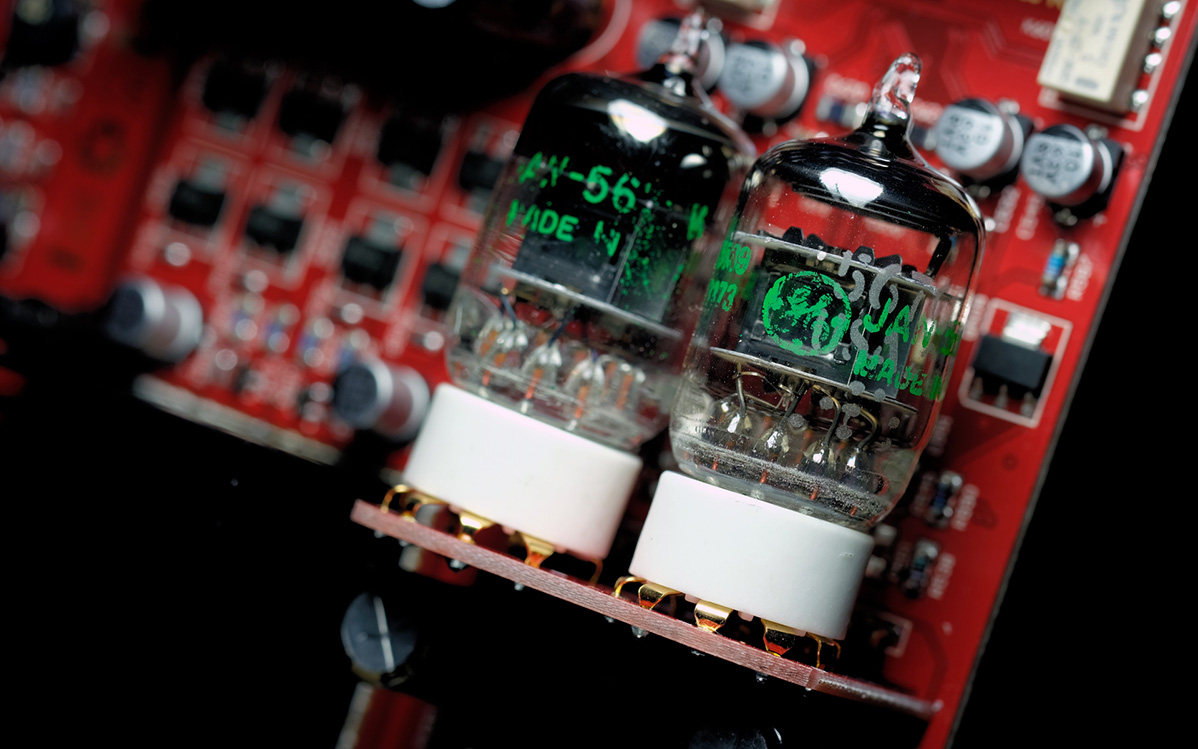 Next in line is the central green-on-black display which marks incoming sample rate, chosen input, applied filter method and digital signal type. Headphone outputs on 6.3mm, 3.5mm with iFi's proprietary TRRS balanced and a standard 2.5mm balanced team up with a 0/+9/+18dB gain switch and next to those is the large volume knob which automatically returns to zero once the machine is powered down. I found that very useful. Lastly there's an IR receiver behind a small black window. 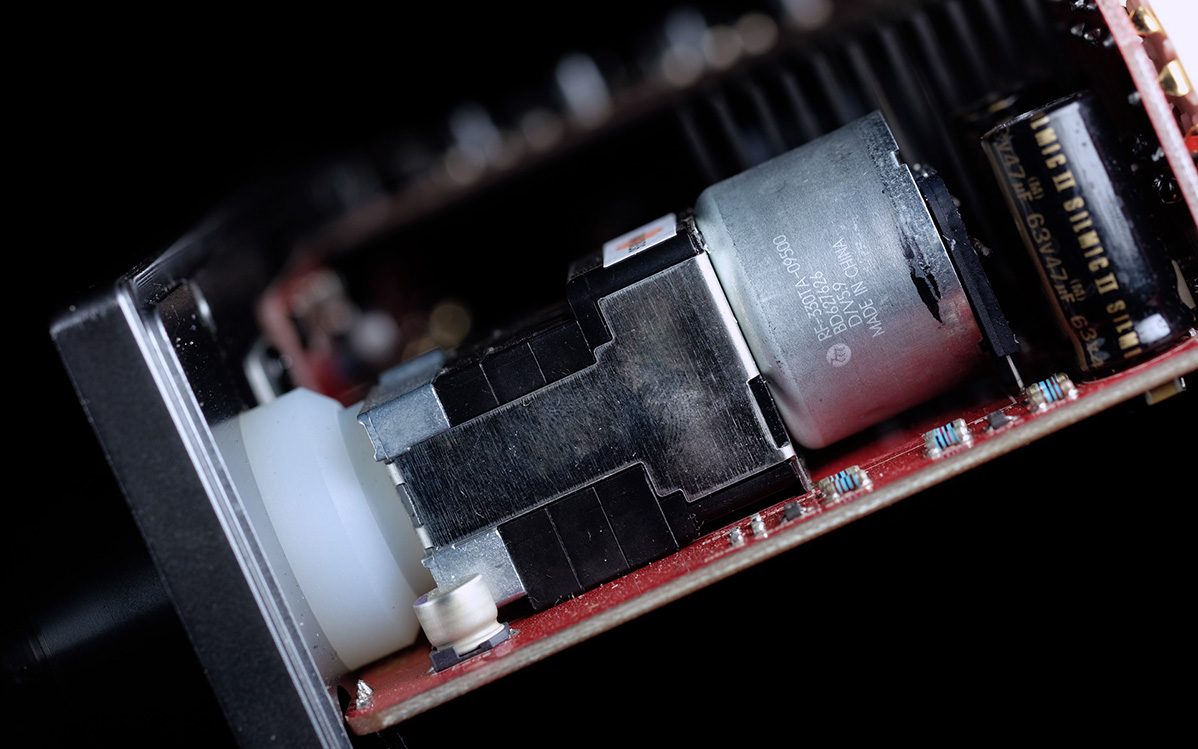 If you thought that well-appointed, the Pro iDSD's rear is even more crowded. XLR and RCA outputs are a familiar sight but their mode selection dial surely is not. Operated via a petite screwdriver included in the package, it allows one to set these analog outs not as just fixed or variable but tailored to home hifi (2.3/4.6V respectively) or pro use (5.6/11.2V). Next in line are six digital inputs. AES/EBU, USB3.0 and a combo S/PDIF/Toslink are the usual suspects whereas RJ-45 in, USB type A source host and a micro SDHC reader indicate that iFi are all about maximized options and versatility. A bit further to the right sits a WiFi antenna with two BNC neighbours. The one on the left can be used as a regular digital input and both can sync the Pro iDSD to an external atomic clock. A small dial between these sets one of four sync modes: atomic, DARS, 10MHz and standalone. This unusual feature indicates Pro iDSD's studio compliance. Meanwhile the DC loop-out in the top right corner can feed one additional iFi Pro product which then requires a shared external power supply. A separate DC inlet accepts any 9-18V power source of at least 60VA rating although the manufacturer recommend their own iPower Plus. 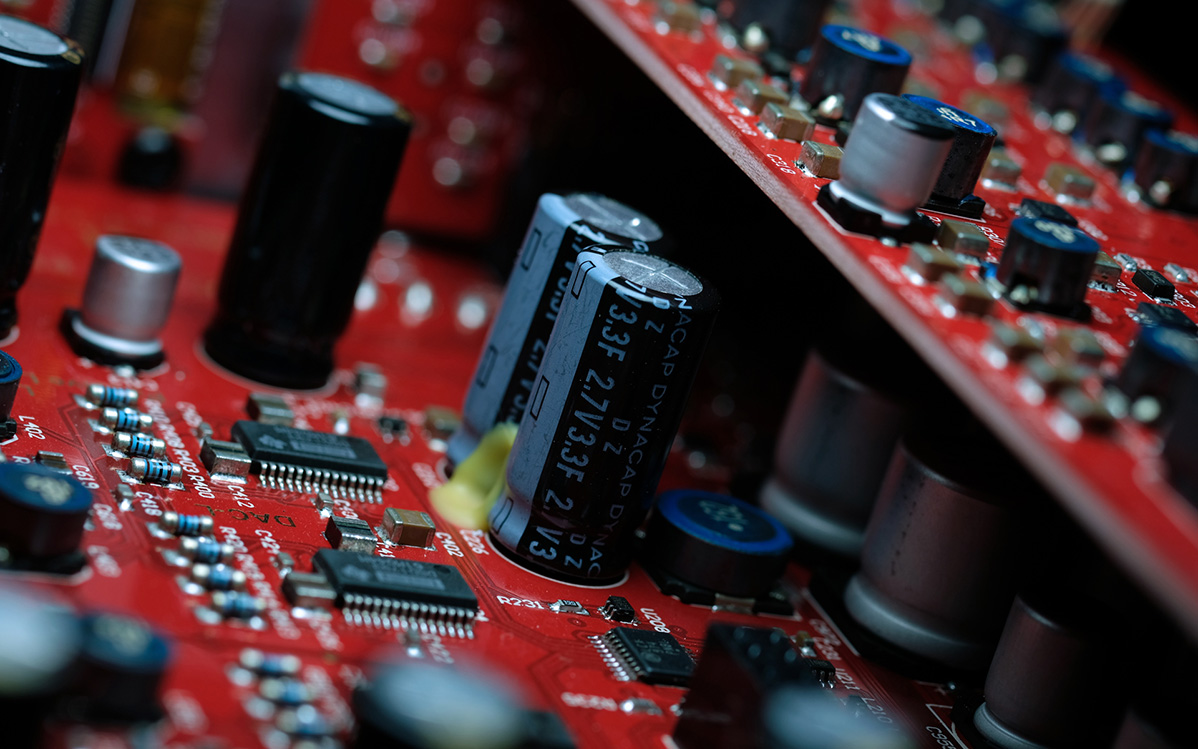 The view under the hood is equally impressive. It's tight in there. Key capacitors aside, all electronics are surface-mount types and spread over three main PCBs. The smallest board on top centres on the XU216 X-Core 200 XMOS USB transceiver (powerful enough to not only render but decode MQA, to be added via firmware upgrade shortly), a Xilinx Spartan-6 Crysopeia FPGA and a WiFi module. The longer DC/AC board generates a high-frequency waveform which is then rectified and filtered via a choke input capacitor, whereas the DC bus generated in the process provides voltages for all sections. The one feeding the digital circuitry gets filtered by 6.6 farad (!) worth of Elna Dynacap DZ super capacitors and stabilized via LDOs with local LC filters. The analog voltage is additionally backed by custom iFi OV2028 op-amp regulators. A 60V rail for just the valves is separately filtered in multiple inductor/capacitor stages based on Elna Silmic II caps. All inputs including USB are galvanically isolated and their data first pools into a memory buffer before being subjected to iFi's proprietary GMT reclocking/jitter-busting technology derived from the AMR DP-777 DAC. 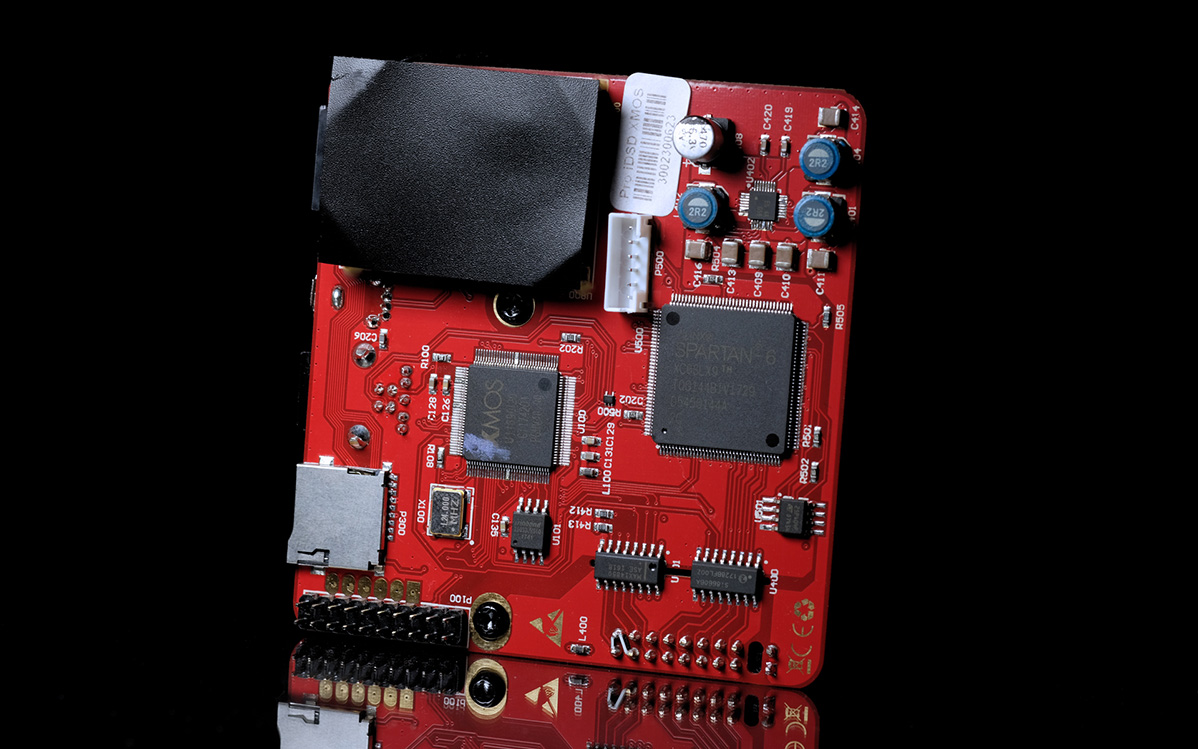 If any DSP is applied, the stream either hits the Crysopeia FPGA first and then 4 x Burr-Brown DSD1793 DACs or directly the latter. These DAC chips aren't just stacked to push the S/NR higher. Used in voltage mode and interleaved, they provide 16 differential mixing signals with their data sheet limitations bypassed. Then a 3rd-order low-pass filter and—if the outputs are set to variable—a motorized 4-gang balanced Alps pot kick in exactly in this order. The analog output stage is very much like the one of the Pro iCAN. It is based on NOS JAN GE5670W double triodes, Jfets and Mosfets. This class A circuit is fully balanced and direct coupled. Omron multi-purpose relays with gold-plated silver contacts handle signal routing. Interestingly, there is no separate headphone circuitry. That's because the pro-ready outputs can handle 200Ω loads with up to 10V to already drive the vast majority of headphones. Headphones are thus run straight off the DAC's own output stage. 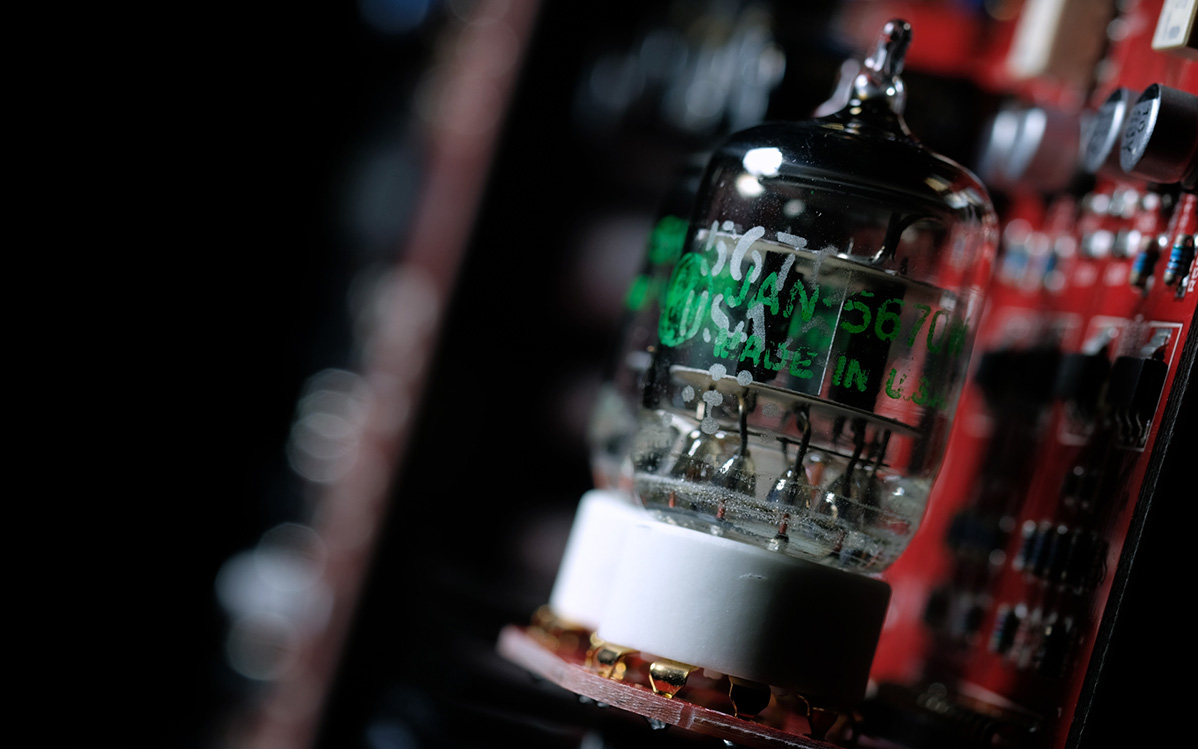