"During my school years, I immersed myself in audio and radio circuits. I then attended medical school to become a surgeon. I spent a year in a Kenyan war zone working as a doctor until I got disenchanted by our appalling operation-room conditions. I decided to do something about it and designed a far superior mobile clinic. This grew into a company which I eventually sold to a US firm. Today my main business is in a medical publishing house where I'm in charge of European operations across six languages. After a few years of primarily writing for a living, the itch to work with my hands resumed. I'd already discovered Anthony's amplifier modules and fell in love with building my own amps with them. Five years ago I invited him to Basel for a week followed by jointly attending HighEnd Munich as visitors. That show was quite the eye opener for Anthony who until then had purely worked in the DIY sector. I suggested that we start building turn-key amplifiers together. He'd design and supply the PCB, I'd handle financing, mechanical engineering, metal work and final assembly in Switzerland. 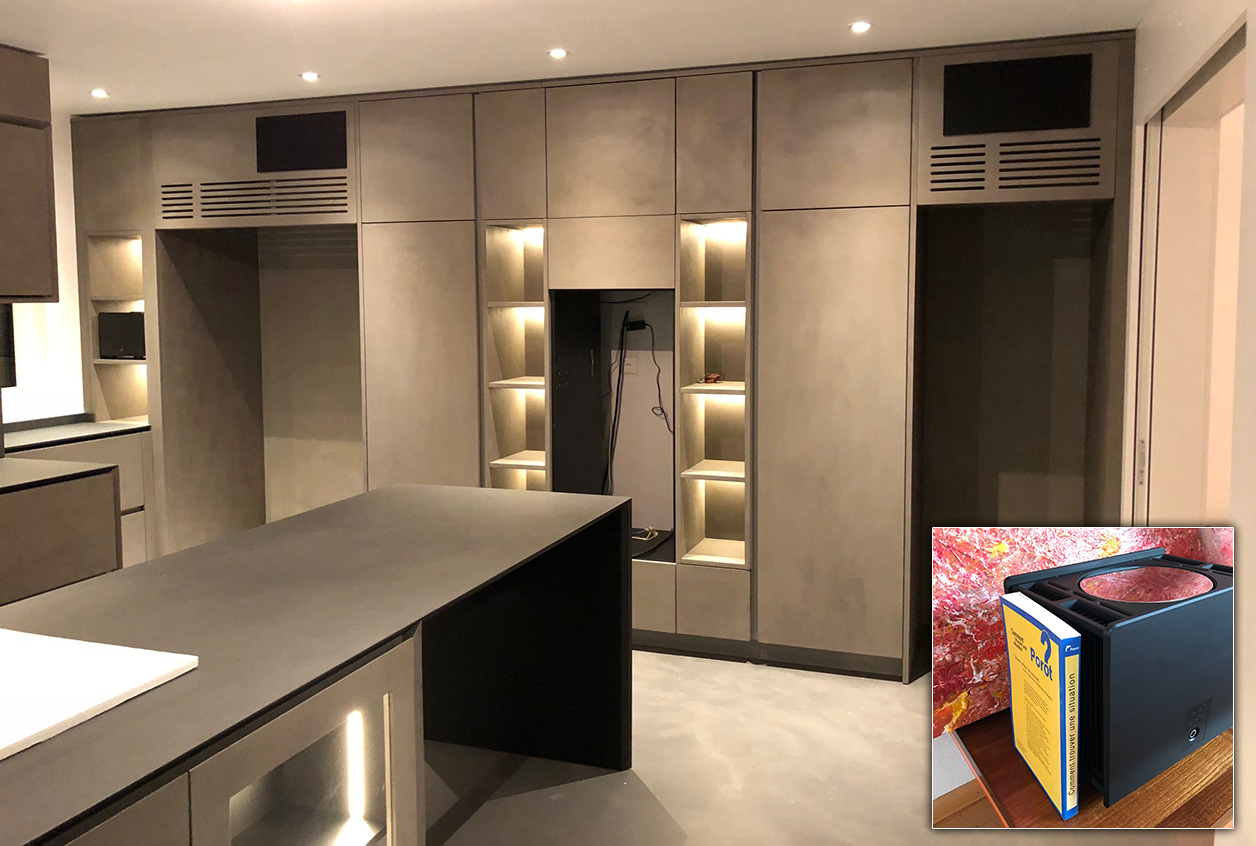 At the far left, a compact Anteos fits just so into the built-in shelving. The insert demonstrates book-shelf amplifier dimensions.

"Our first joint project for a Melbourne hifi show were the Ex Nihilo monos. Those virtually arose from nothing. During their development, we spent about 2 hours each day on Skype to compare notes and discuss circuit details. We'd sold several pairs when a lady customer needed nine units for her house. However, she wanted something smaller. That became the impetus for Anteos. We decided that a 20x20cm motherboard would be ideal for her 'bookshelf' application and that's how we arrived at the cubic size of Anteos." 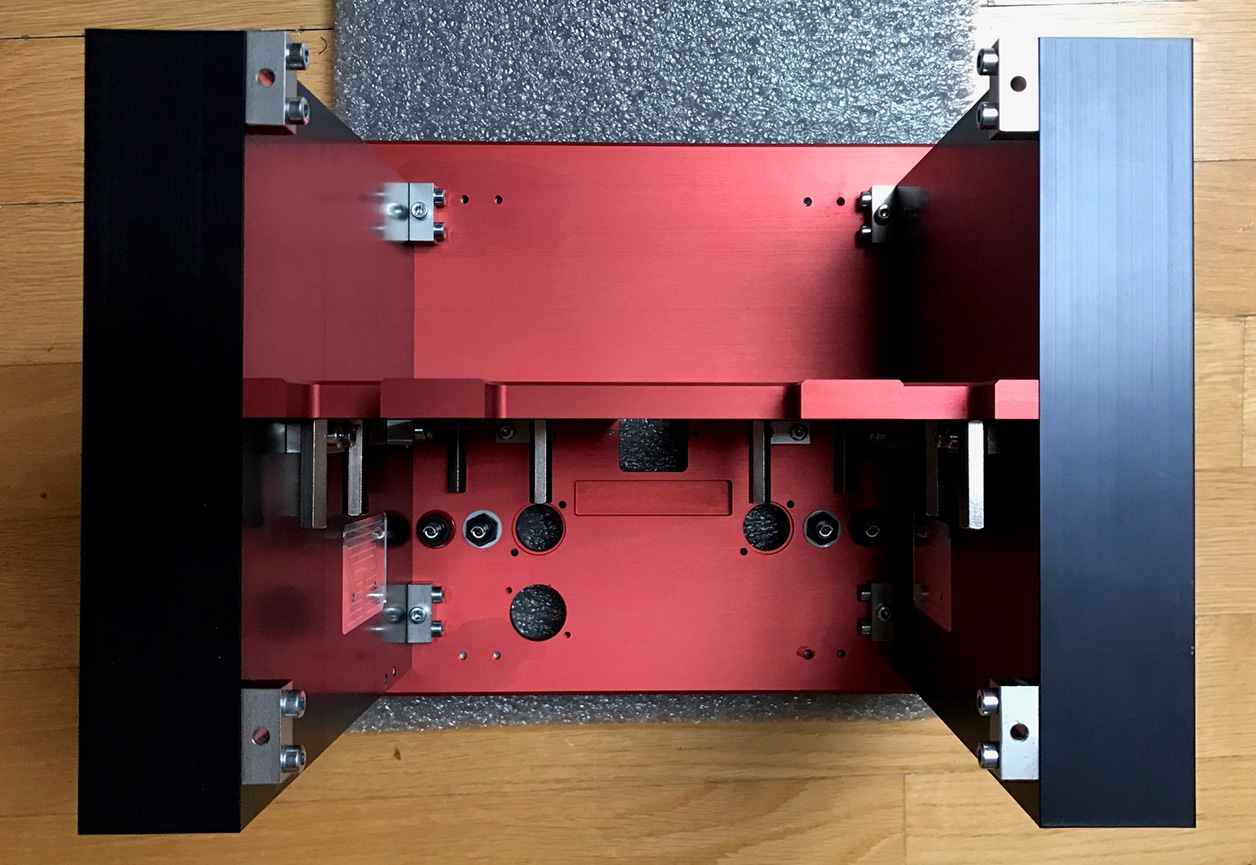 Showing off the central divider brace.

"It's our continuation and replacement of Ex Nihilo, hence its Greek meaning of first one for our present range. We already have a 300-watt fully balanced stereo version with 8 x 250-watt lateral Mosfets per channel called Sentor, for those who really do need twice the power. Inviso's even bigger size is simply a raw function of the dissipating area required to keep its temperature within 27-28° of room temperature. I dislike amps that run very hot, i.e. over 60C°. 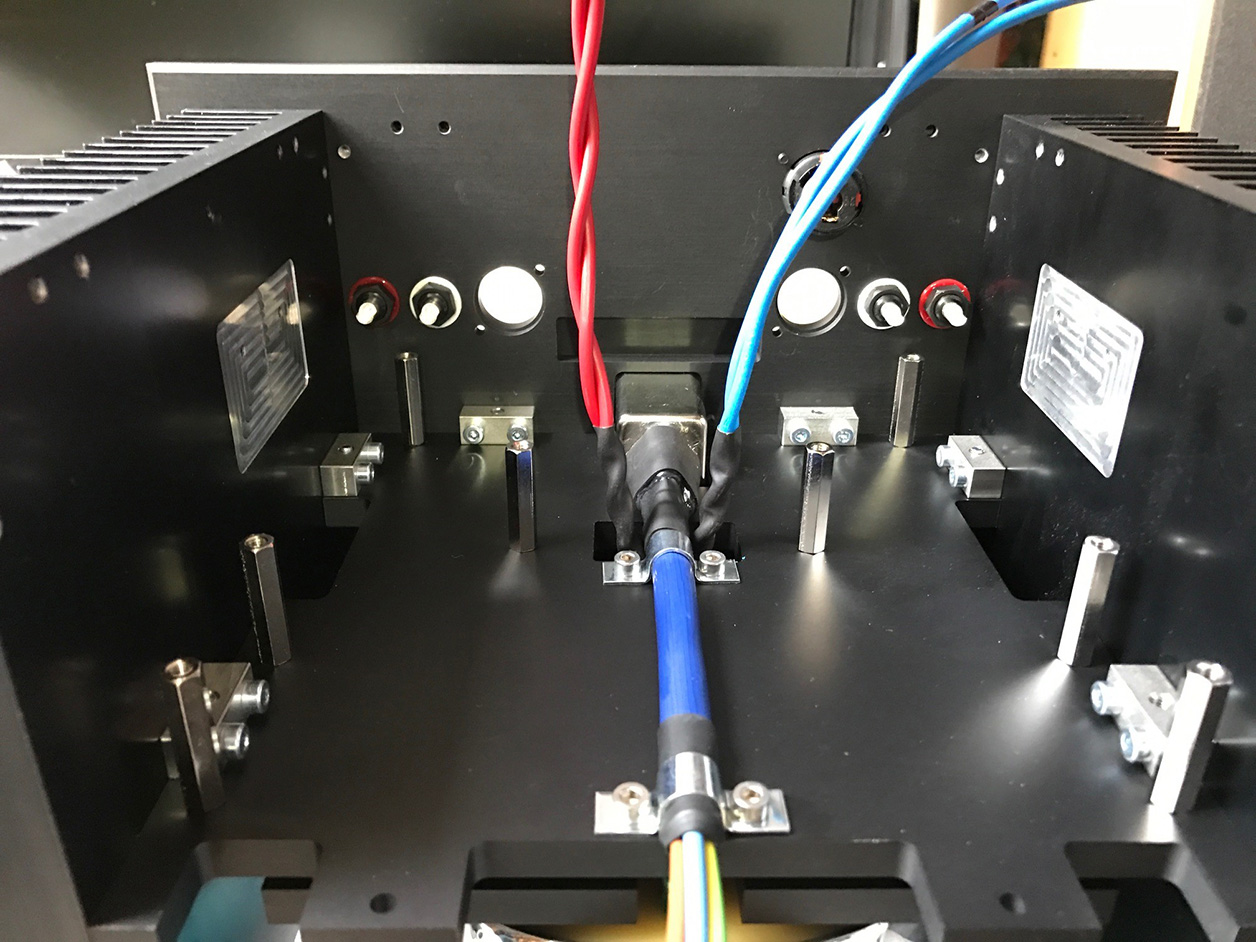 "For me, hand-building amplifiers with Anthony's brilliant PCB is like fine cooking. Only the freshest best ingredients will do. 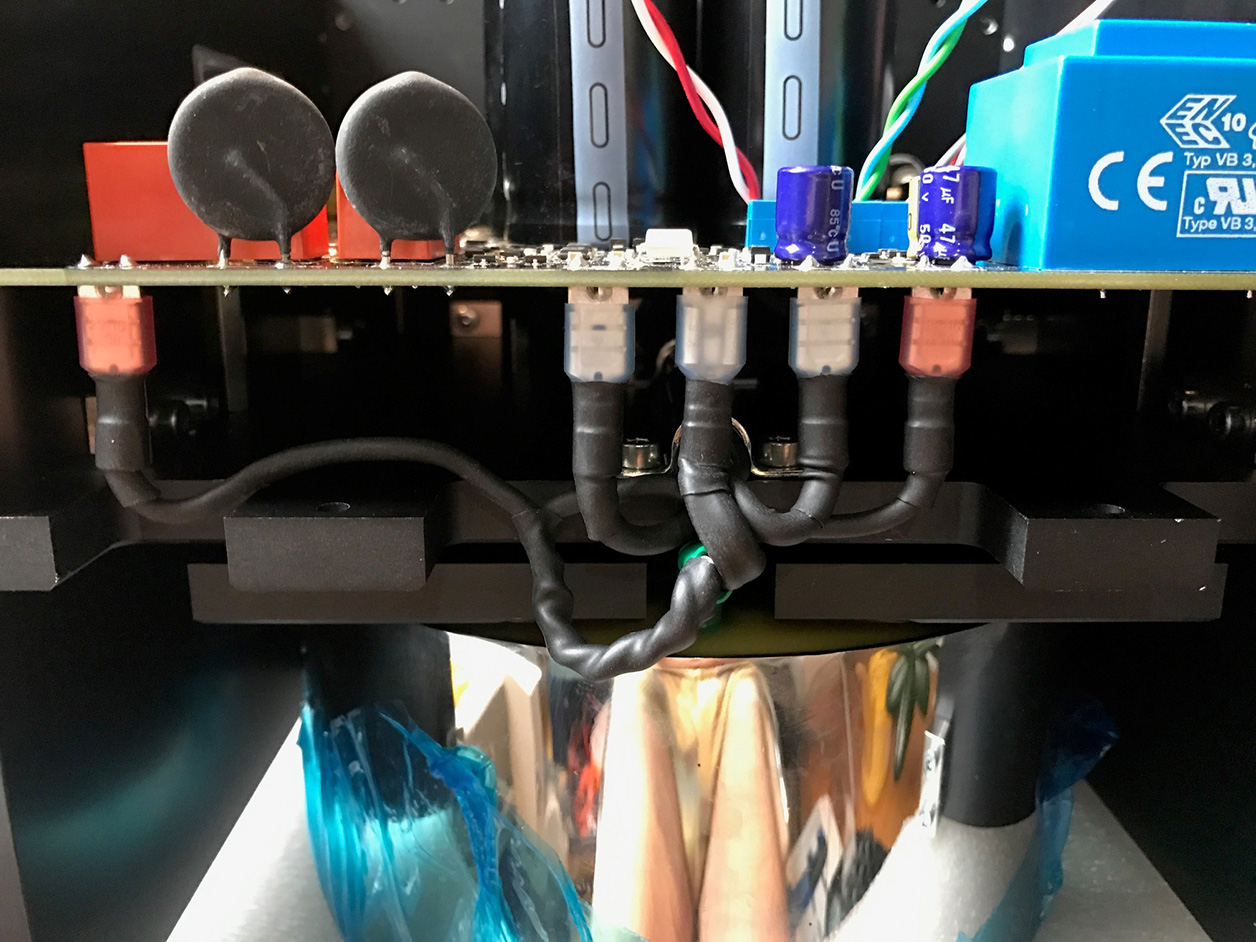 Close-up of the central divider and board. 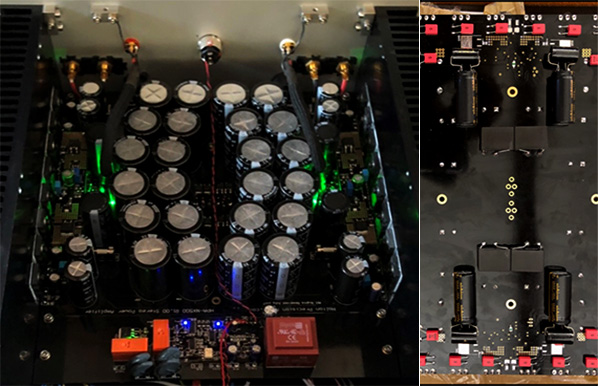 "My collaborator on strategic parts selection is Davorin Anderlic from Slovenia. He has built up in-depth knowledge on several hundred thousand different audio-related parts. We work closely together on the final tuning of each circuit by substituting parts of identical values until the sound is where we want it.

"As a still very small Swiss boutique, we can be responsive to special customer requests, say for particular connectors, even their favorite resistor or capacitor brands. As such we intentionally work on low inventories to accommodate to-order scenarios without having to rebuild fully assembled units. Aside from the usual black and silver anodized skins, we can do red, blue, bronze and gold.

"On his end in Tasmania, Anthony continues with his DIY efforts but today also offers assembled units, albeit of far simpler parts standards than our models. His primary focus is on circuit design, not tuning with exotic parts. He doesn't sell into Europe to cover primarily his domestic market, leaving Swiss Holton to focus on EU customers who can listen in my show room."

As we saw, Theo Constada's story did indeed parallel Soo-In Chae's at Bakoon to quite an extent. That includes taking on production and the challenges of multiple websites with different products.

With the current three Swiss Holton models of Anteos, Inviso and Sentor [innards at left] really built in Basel not Tasmania, €6'900 for Anteos registers as very fair. If it came from one of the big established upscale brands there like CH Precision, darTZeel, Goldmund, Nagra or Soulution, we'd expect quite a surcharge.

Of course for that they do copious advertising, trade shows, dealer support and more. Swiss Holton fly beneath that radar. Our review and others which are surely bound to follow should at least raise their visibility profile. Were demand to grow to enforce larger production volume, a dedicated facility and employees, much of the current boutique appeal and positioning could change. 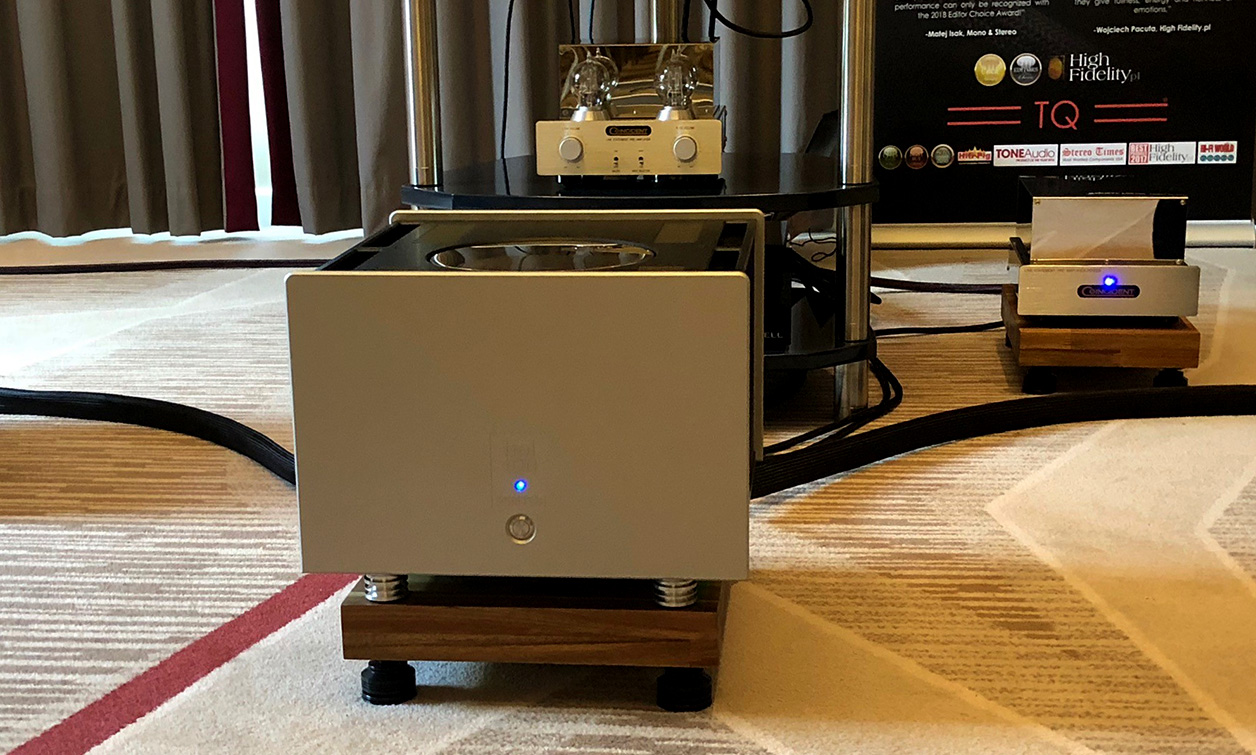 The next photos show how the current twin-storey construction of 'clean' and 'dirty' box halves had evolved from a more conventional layout of a Davorin model whose circuit wasn't yet fully balanced. 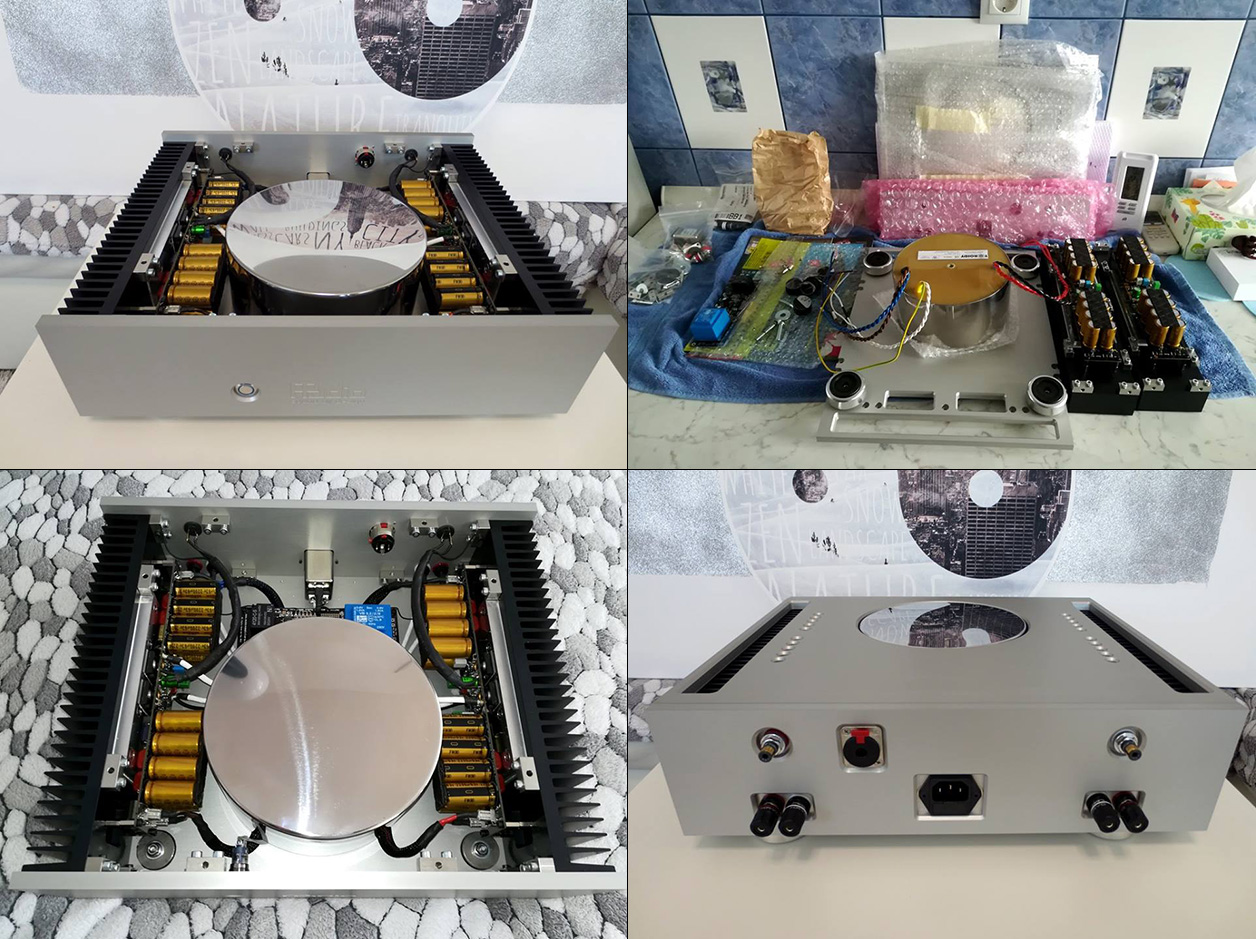 For demonstrators of color combinations, here we have Holton's Vinci model in two shades of bronze and gold, respectively.

With introductions wrapped, we usually would segue to sonics and complete this promising Swiss/Australian Holton exposé. Alas, now was snafu time. After first proof of life then a brief respite to finish up another review, I couldn't get the amp to restart. Whilst its fuse looked good, I tried three others, different power cords, sundry wall outlets. Nothing worked. So Theo Constada recalled it only to have it turn on at his place without hesitation. It had both of us at a total loss. Mishandling in transit also meant that Theo received it cosmetically damaged to initiate a lengthy damage claim. Since then he's been out of touch and I'm at a loss about when/if to expect it back or what to think…