Voce & Susvara – two lightweight comfortable headphones, with the Californian walking ahead on superior fit'n'finish where the nearly twice-priced Chinese don't fully impress. Here we see the Voce altar in closeup with its natty doors reminiscent of a rare 1955 Mercedes 300SL Gullwing executed upright. These close with a gap beneath to clear the cord. When you don't listen, keep it plugged in but the headset dust free. One of the small magnets which close the doors against metal pins in the base had fallen off. Some cyanoacrylate aka superglue re-attached it. 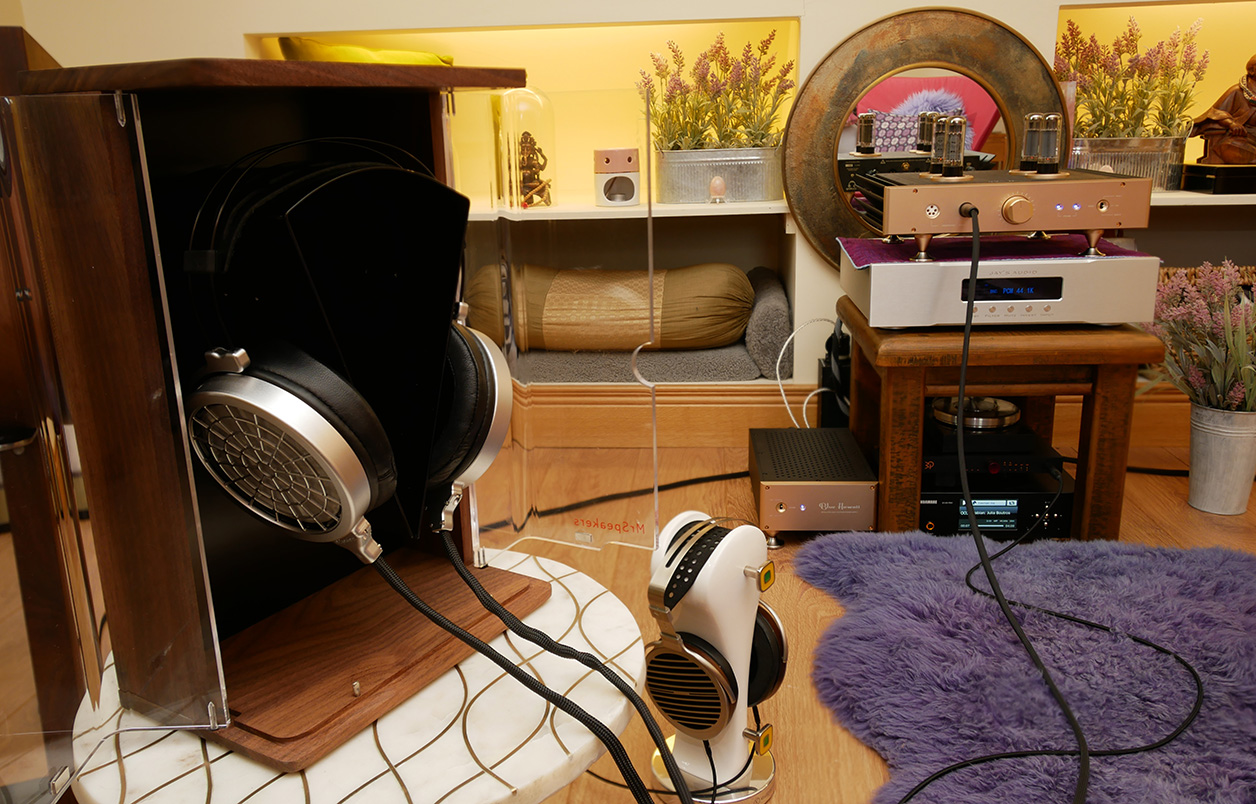 To start this tasting session with string orchestra and mature female vocals, I spun up a very classy Julia Boutros on "Shou El Helw Feik" from Yawman Ma. Flipping through musical ear muffs, the first difference to register because it was most pronounced was a potent flavor of DSD for Voce, of PCM for Susvara. That meant fluffier hall sound, dominant sweetness and softer highs for the former; a cooler more damped, spatially sparser more separated and in the treble more brilliant mien for the latter. At this point I was very suspicious. What I heard was likely far more tubes versus ultra-bandwidth DC-coupled transistors than actual ear speakers. Without a valve headphone amp to drive Susvara or Sonorous X with, I had to either soldier on or give up entirely on reviewing by contrast. Since I consider comparisons essential, I marched on. Just so, let's consider these comparisons less useful than normal.

For the next track, I selected some well-recorded percussion to check on rise times, lack of energy storage and startle factor as key ingredients to portraying believable shamanic realism. Sjahin During's Afro-Anatolian Tales made for a good example, here with "La Topa Saray" featuring Kurdish singer Aynur. Had I only heard this over the Final D8000 planarmagnetics on my desktop, I'd have wondered. That's because those bassier heavier headphones do it patently thicker, slower and more opaque on top to very much play down all the quicksilvery electrified aspects. All of that slower fuzzier warmer stuff rendered this track quite ho-hum.

Meanwhile Voce and Susvara transformed it by equally excelling at the sharply cracking beats, the searing rusty bloom of big metal plates excited along their edge and other jungle-evoking noises which set up a tribal location ambiance. This equality of speed and startle factor between both designs when I played them sufficienty loud coexisted with Voce's greater sweetness and slightly less damped demeanor. With the Blue Hawaii SE an OTL design to not suffer bandwidth limiting and related phase shift of output transformers, I didn't think that switching to transistor drive would have reset those markers. In which case I'd give the Raal ribbons top billing in that discipline of maximum speed and beat fidelity. Voce/Susvara shared a mellower but still very aspirated second place. That felt pertinent because also in general I thought these quite equally matched whilst attempting to listen through/past their very different amplification. Since I couldn't do that, we'll leave it at that.

Voce & Sonorous X. This ended up as a non starter. On openness, spaciousness, speed and related qualities, the shiny Japanese heavyweights in their full-metal jackets lived in a lower darker older world. If you're attracted to the thin-film genre of planarmagnetics, e-stats and ribbons and prepared to play in their respective top leagues, you'd not consider the Final. I'm not sure how Focal's best dynamics would fare against today's membrane not cone/dome types but from our collection, nothing else belonged.

Triangulating a square with a circle and its hole in the middle? Without hearing Voce with two or three other amps to, by the usual process of elimination, arrive at a clearer notion of its own sound, I was left with thinking them a close HifiMan Susvara kin which simply played everything in deep DSD mode. Compared to our best planarmagnetic and ribbon alternates, Voce over the HeadAmp Blue Hawaii SE exhibited a constant texture of billowy spacious softness plus tonal sweetness which expressively weren't side effects of handicapped reflexes, lack of lucidity or thick padding. Yet thin, pale, whitish, zippy and lightweight aka bass shy all were wicked lies. Whilst those may have held true for e-stats at an earlier time or with specific examples or combinations of the breed, they squarely weren't in this implementation on this amplifier. 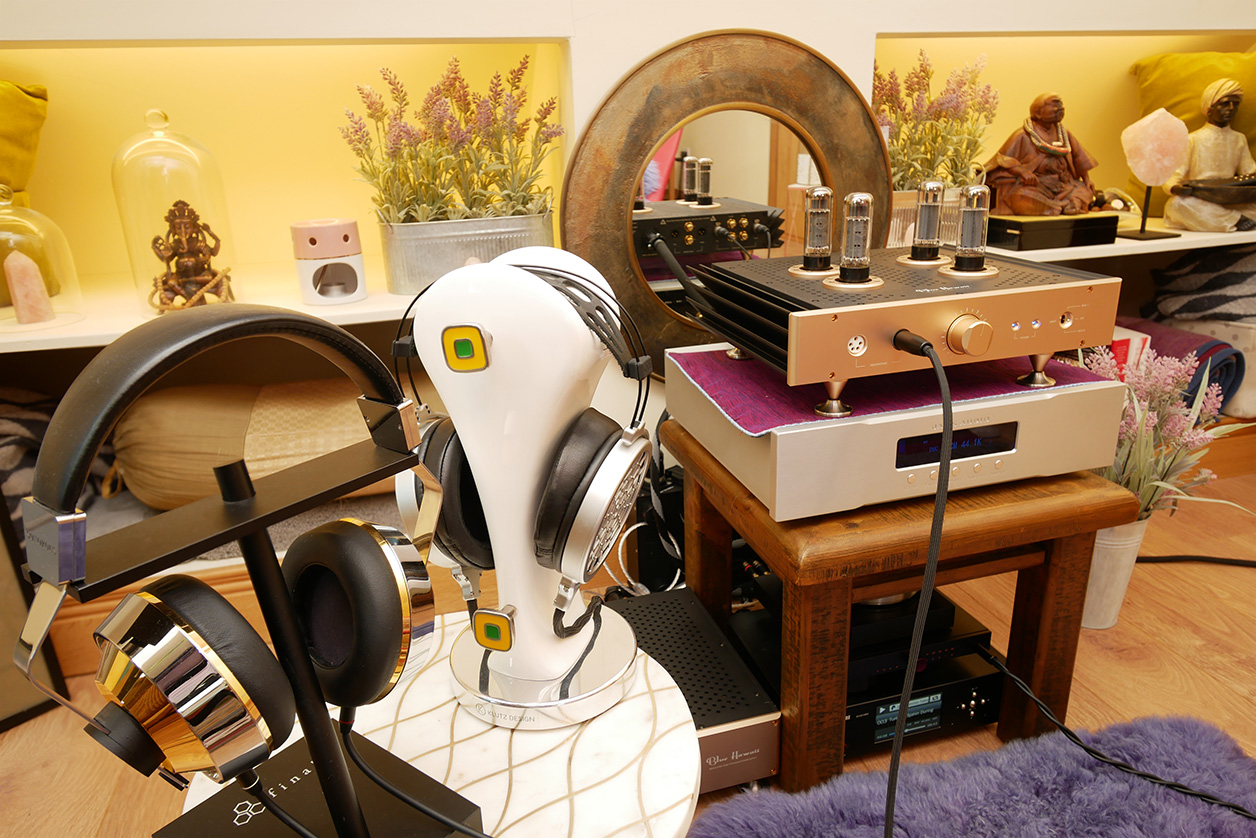 Could Voce driving Blue Hawaii SE be closest yet to direct-coupling valves to cochlea? Not having heard the ZOTL Berning amps under Mark Schneider's Linear Tube Audio brand with Susvara, that was a question which crossed my mind during these sessions. Dead quiet without any glassy crackle, the Hawaiian Voce did deep immersive space in an enveloping not checkerboard-sorted fashion to prioritize the musical encounter over the mental detail count. It was maximally smooth and liquid without brushing over any little things. Most surprising perhaps given popular preconceptions, it did weighty extended low bass without going all elephantine like our pre-Fazor Audeze LCD-2 did. Fit was very comfortable without undue lateral clamping force or that Chinese drip-torture sensation of discomfit which many headphones build up on the crown of the skull with extended wear.

In hifi reviews, it's rare to conclude that a particular component or component combination made all music sound simply gorgeous and leave it at that. Like musicality, beauty seems like a weasel word by those with insufficiently critical vocabulary to quantify the effects of beauty or musicality. But having identified certain core aspects of the Blue Hawaii SE/Voce pairing, it actually feels most meaningful to close out on exactly such a note. If you were allowed just a word to describe how your system portrays the music, you might pick 'exciting', 'dreamy', 'transporting'… the list is very long. For today, that one word should now be beautiful. Given that home-based playback is a purely hedonistic pursuit—it doesn't pay the bills, put food on the table or send kids to college—that strikes me as a very apt focus and accomplishment indeed…