The package arrived in a large box on a mini pallet. Upon opening the box, we encountered a partly assembled turntable. All parts were nicely wrapped in plastic foil or sealed in plastic bags. We unpacked the plinth with already mounted arm, cartridge and dust cover, the separate platter, the power supply and some smaller items. Those were the drive belt, turntable clamp, spindle tip, three washers, some Allen keys, a stylus gauge, felt mat and the anti skate weight. To complete the package, there were the turntable and tone arm manuals, a protractor cartridge alignment tool and a stroboscope card. In short, everything to get going. 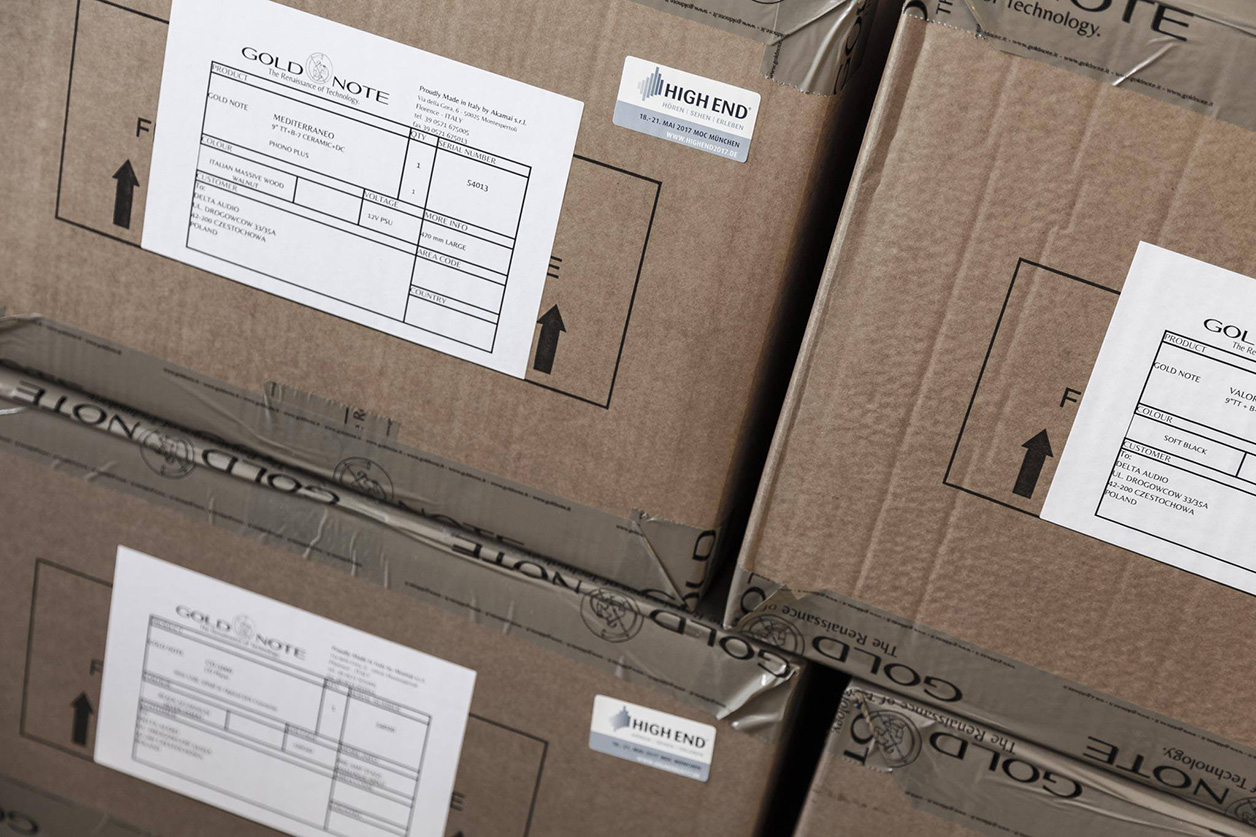 With everything unpacked, we started assembly. First thing to mount was the 45mm thick Sustarin polymer platter which just meant placing it over the flat bearing surface protruding from the plinth. The fit was perfect and the platter hovered with just 3mm clearance above the plinth. The bearing itself was a 5mm tungsten ball in in a bronze race. Next came the spindle tip which simply screwed into the platter's center hole to hold the platter in place. 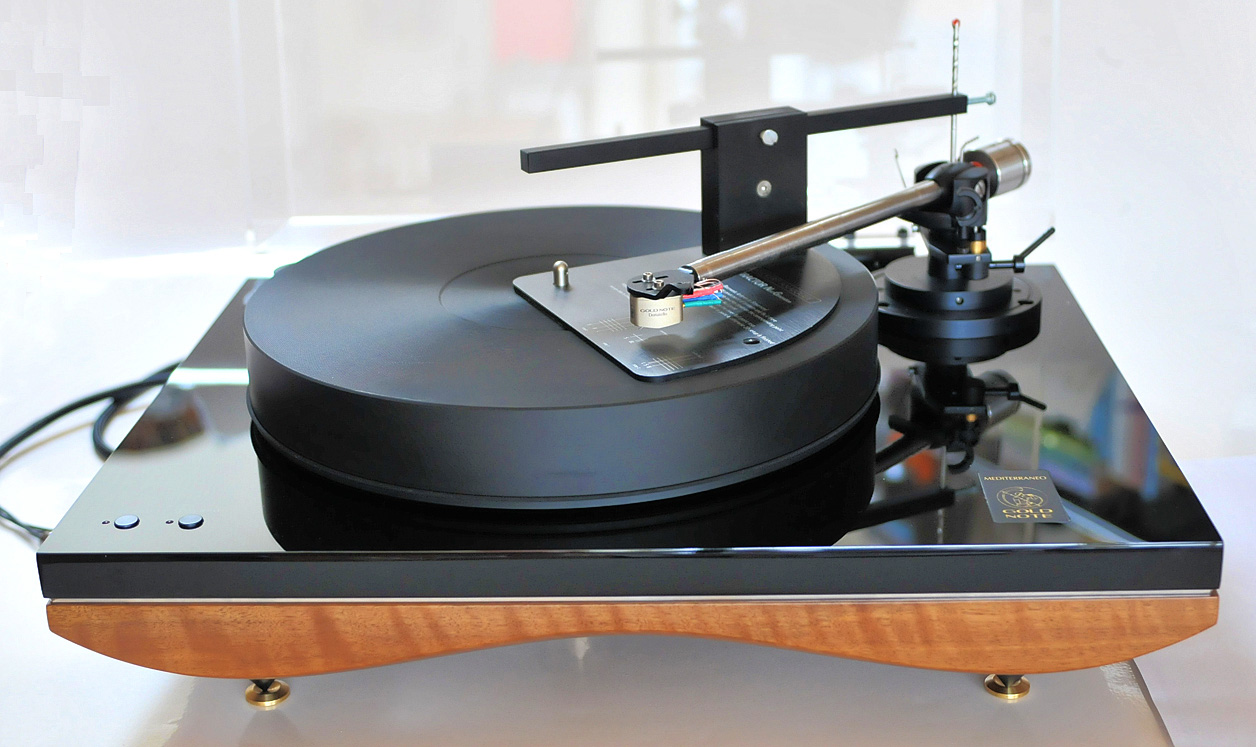 Gold Note provide a round drive belt assembled from 70 strands of polyvinyl that connects the hour glass shaped pulley of the motor to the platter. With the platter and belt installed, we could focus on the arm and cartridge. We used the supplied Allen keys and protractor to adjust VTA, align the cartridge and set the counterweight for 2 grams. For an extra alignment test we used our Dr. Feickert protractor. When all looked fine, we were into it ¾th of an hour.

With the turntable fully assembled, we admired a really nice design with just one small visual contradiction. Looking from the front, the first thing to stand out was the curved lower part of the plinth. Gold Note use a big log of very old—we heard whispered 100 years—Italian walnut wood cured and dried extensively. After being cut into slabs, the very dense hard wood undergoes a high-pressure preservation treatment  in an autoclave. From that the signature curved shape is carved. That isn't just about aesthetics but physics. 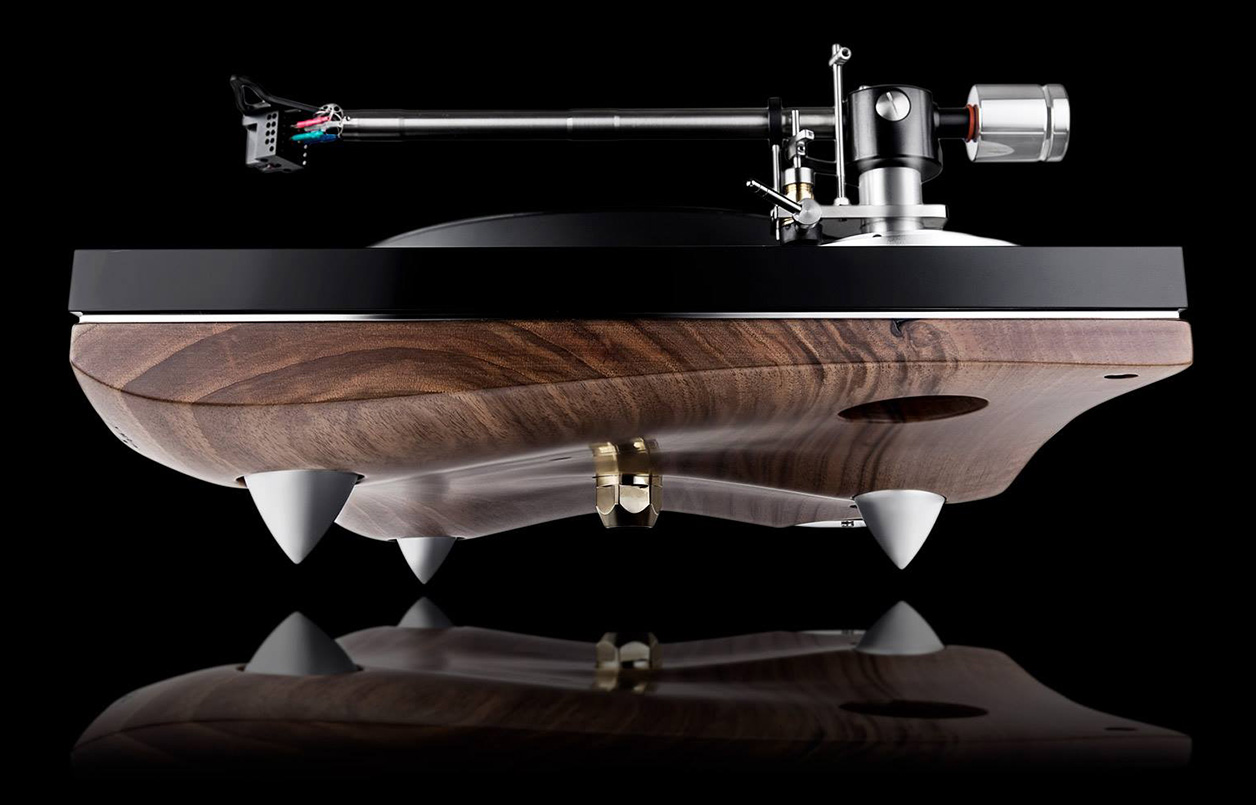 In fact the curve is an inverted catenary. A catenary curve is the name for the shape which a chain forms when being loosely suspended from two points to sag under gravity. Suspension bridges are the most common examples while the great arch of St. Louis is an example of an inverted catenary. Gold Note did not use it for the entire plinth front to back where the curved plane slowly evolves into its own inversion. Under the plinth three adjustable spikes take care of stable placement and some vibration control.

On top of the Walnut comes a 3mm stainless steel plate which separates the upper part of the plinth, a 20mm acrylic slab. On that were the 33/45rpm speed controls. Operating both at the same time for 4 seconds accesses the fine speed settings. For those the include strobe card is handy. Gold Note claim that the use of their special curved aged and very hard Walnut plus steel and acrylic matches even rivals designs of far more massive plinths.