The Italians chose just one motor for their Mediterraneo, a frictionless high-efficiency synchronous affair decoupled from the plinth with an elastomer. Part of the motor protrudes through the Walnut section to reveal a mini USB port for firmware/software maintenance. Said software controls the pulse-width modulation of the micro speed controller. Gold Note developed this software in-house and use it to run their synchronous AC motor from incoming DC via a simple switch-mode power supply. This supply can be simple as the motor AC is in fact regenerated.

With the Mediterraneo came the B-7 ceramic tone arm, a 9" straight design with four ceramic ball bearings. Its six sections of varying thickness are of Titanium. Overhang is 19mm. There was an adjustable hydraulic lift on the arm's collar and anti skating was simple but effective by way of a looped nylon wire with a little weight. Next to VTA, azimuth was easily adjustable. What we missed was a mini level to complete the setup.

As for the cartridge, we received the aluminium-body Gold Note Donatello MC. Its output is 0.5mV and frequency response a claimed 10-40'000Hz. Gold Note suggest loading it with 470Ω. At the tip of the aluminum cantilever was a micro-elliptical diamond designed by Gold Note then sourced from Japanese industrial jewel giant Adamant-Namiki. At the other end sat a copper wire coil with samarium-cobalt magnet

We mentioned earlier a small visual contradiction aka the dust cover. Though effective, well built, sturdy, with a perfect fit and detachable, when closed it impaired the beautiful look of the table. When opened, the great looks returned. Like commenting on tube amp covers, this was mere nitpicking. Time for some  music. We connected the SMPS output to the terminal at the back of the turntable and the signal leads to our Trafomatic Reference Phono One set to 500Ω as closest to the recommended 470Ω. The remainder of the system included more Trafomatic electronics, their Reference One preamp and Kaivalya EL84 monos. 19Ω/109dB Avantgarde Duo Omega were the loudspeakers on duty. 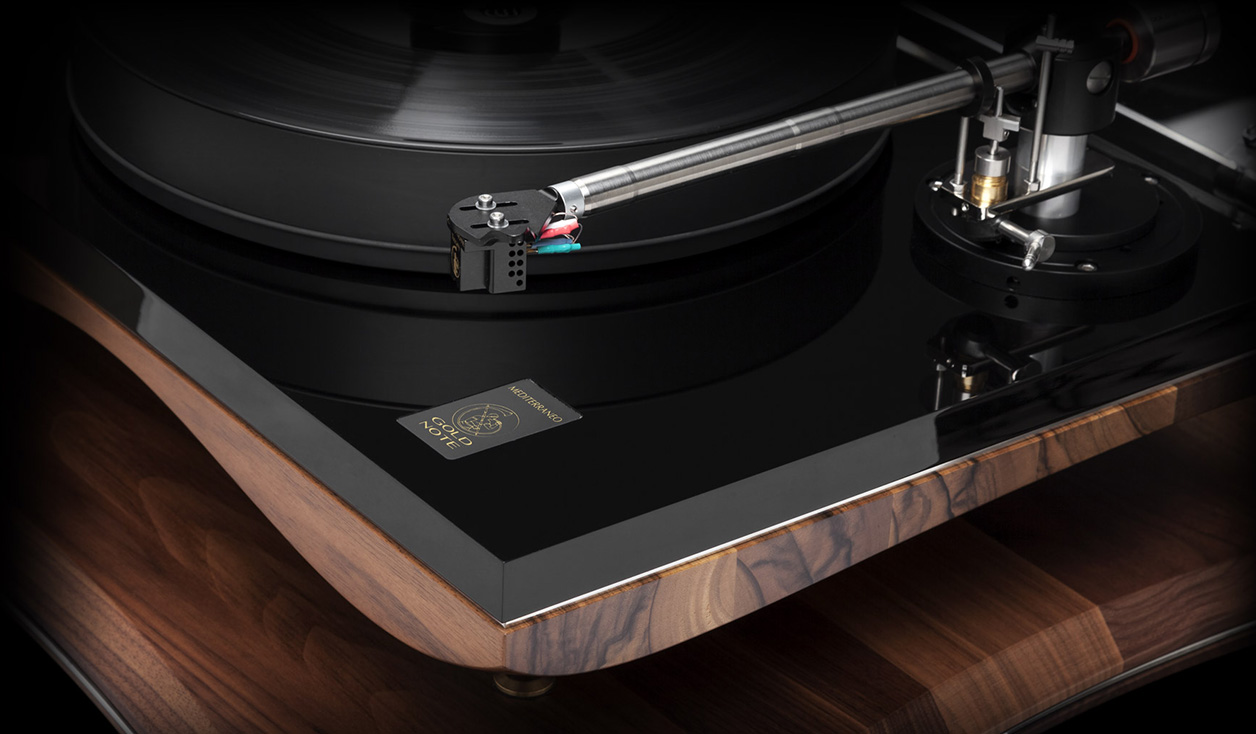 The first record on the platter slab was Unifony as the last LP we'd played on our resident Feickert Blackbird. Our initial impressions were mutual and noted as "strong in bass", "clear" and "large". Further notes stated "LP directly on platter" and "with puck". Unifony sports very well-recorded/produced multi-layered soundscapes featuring Mathias Eick on trumpet. And it was that trumpet which had something to it. At the time we could not yet put our finger on what it was. Next we played Leonard Cohen's You Want It Darker and darker is what we got. This recording and pressing aren't the best of the best but quite decent. The aged bard's voice was dark and rasping as if each vibration of his vocal cords were visible. But what defines Cohen's voice for us at least is that little edge or brightness which shines through the coatings of nicotine and tar. And that was missing. Avishai Cohen, the bassist on From Darkness sounded fine, however. We had no doubts with this rendition of the trio's album but with Hold on Tight by Dutch De Dijk and Solomon Burke, that slightly-off feeling returned.